The Accident Investigation Board Norway (AIBN) has recently reported on a serious incident involving Airbus Helicopters EC130B4 LN-ORR, operated by Helicopter Utleie (now trading as Fjord Helikopter) on 12 August 2014 when arriving at Rørvik Airport for refuelling.

The commander quickly understood that he had no directional control, and chose to land the helicopter without engine power. The helicopter rotated twice around its own axis before it was landed on the runway. No injuries or damage occurred.

The reason it did not have more serious consequences was because the commander quickly figured out that the tail rotor was not functioning, and he made the right decisions.

…it was decisive for the outcome that the incident occurred over a flat surface.

Had the tail rotor shaft fracture occurred at a less favourable moment, and over rugged terrain, the outcome of the incident could have been fatal.

The Technical Investigation and Analysis

An examination revealed that the riveted joint just behind the tail rotor drive shaft (TRDS) no. 1 bearing had fractured. 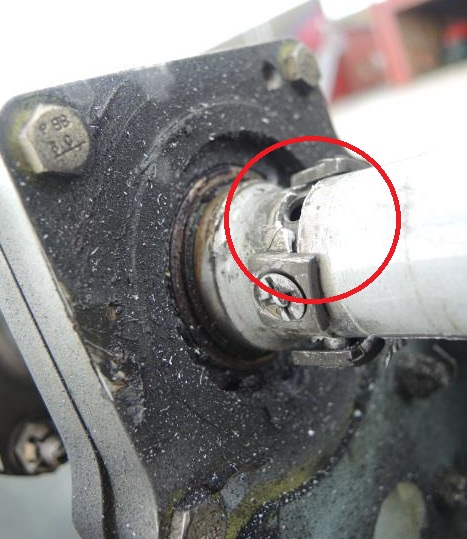 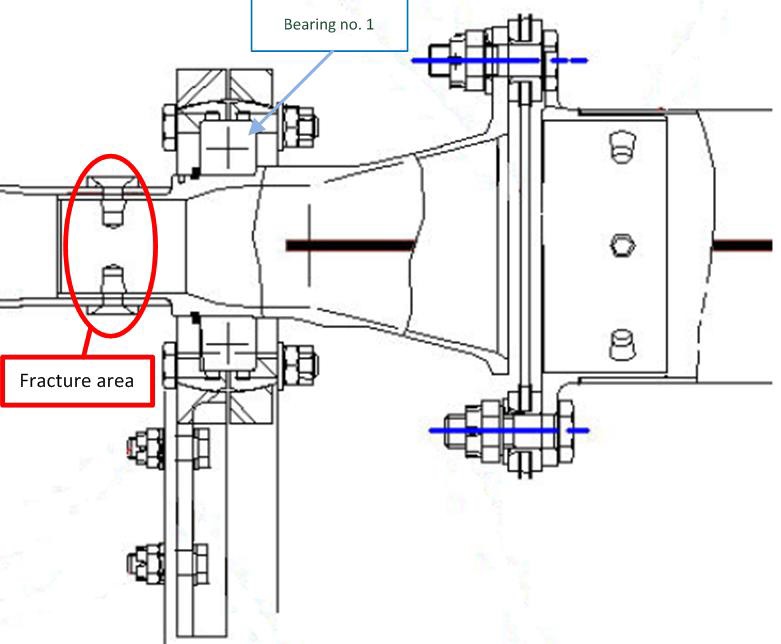 The bearings on the TRDS had been replaced during scheduled maintenance 98 flying hours prior to the incident.  AIBN say:

It became evident that the position of the bearing in relation to the shaft did not comply with the Aircraft Maintenance Manual (AMM) requirements. The measured discrepancy was approximately 1 millimetre, whereas the maximum permitted value in the AMM is 0.1 millimetre. 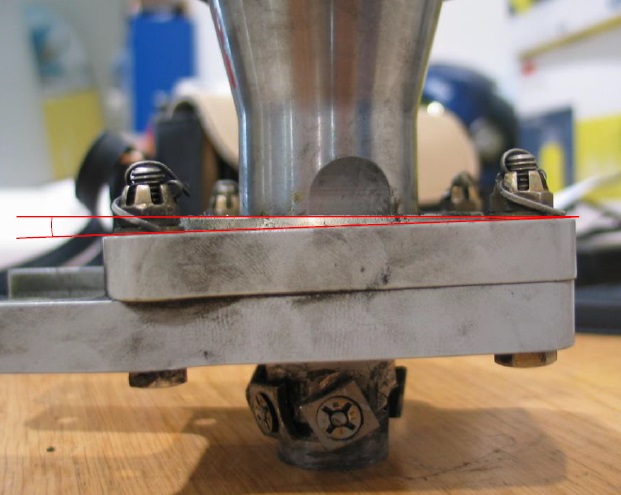 Lab examination showed the rivet holes had deformed and the six rivets had become worn over time.

Lab examination of the bearing “showed that the bearings balls had made an abnormal track in the outer race”.

AIBN asked the technician who installed the bearing to demonstrate the measurement method for verifying the bearing’s position in “Bearing drive/Bearing flange”. The measurement demonstrated to AIBN did not comply with the method described in the helicopter’s AMM.

The aircraft technician had worked alone on Helikopter Utleie’s helicopters for many years. Without having a community of colleagues for support, there may be a risk of developing sub-standard working methods.

The technician, from a contracted Part 145 (see below), had incorrectly used the tailboom structure as the reference not the TRDS itself.  The AIBN state the specific AMM task was “was fully understandable”.  With condor and proactivity:

Airbus Helicopters… concluded that the measuring method and adapter to attach the dial gauge to the tail rotor shaft should be emphasised more clearly in AMM, so there is a greater degree of reproducibility of the measurement results when replacing bearing no. 1.

AIBN established that the bearing installation had not been subject to an Independent Inspection by a second person.

The work on LN-ORR was carried out at the helicopter company base in Stryn. The technician carried out this work alone. In a best case scenario, he would have inspected his own work. This would have been an inspection based on his personal understanding of the procedure in AMM, which was incorrect as regards installation of bearing no. 1.

An independent inspection performed by another competent person could have identified the error.

The aircraft technician is at “the sharp end”, where errors can have direct consequences for flight safety. The AIBN is therefore of the opinion that having just one person carry out maintenance tasks that qualify as “Flight Safety Sensitive Maintenance Tasks” or “Complex Maintenance Tasks” alone should be avoided.

The AIBN also noted that the maintenance organisation “did not split up and specify the work in their worksheets for ‘Complex Maintenance Tasks’ as described in EASA Part 145”.  The lack of such stage sheets has been observed in other accident investigations (e.g. this NTSB investigation Fatal $16 Million Maintenance Errors).

At the time of the incident the operator had a fleet of two EC130B4 and one EC120B.  Being as small operator the Accountable Manager was also the Quality Manager.  Further, the the Continuing Airworthiness Post-holder was a part time contractor.  The company had placed a contract with a large Part 145 approved maintenance organisation SAM Aero.  AIBN say that their investigation resulted in the:

…impression that certificates and governing documents from both the helicopter company and the maintenance organisation were adequate.

The fact that good intentions and formulations were not always followed, first emerged in connection with investigation surrounding the actual incident.

At the time of the serious incident involving LN-ORR, the company had privileges to perform maintenance on AS350 series, EC130B4 and EC120B helicopters. This service was only performed for Helikopter Utleie AS. Following the incident with LN-ORR, the Norwegian Civil Aviation Authority [CAA-NO] conducted an extraordinary audit of the company. The company’s A3 (Helicopter) privileges were withdrawn based on findings during the audit.

The issues identified by the CAA-NO included:

The AIBN discuss enhancements to EASA Part 145 and Part M (NPA 2012-04) that we have previously written about (Critical Maintenance Tasks: EASA Part-M & -145 Change).  They also note that EASA completed a “Standardisation Inspection” of the Norwegian CAA in June 2014, and made a finding that:

The CAA-NO does not ensure that the requirement for independent inspections as specified in M.A.402(a) is applied in maintenance organisations.  Substantiation: Both Part-145.A.65(b)(3) ‘capture errors on critical systems’ and M.A.402(a) ‘flight safety sensitive maintenance tasks’, require methods to control maintenance errors that could endanger the safe operation of an aircraft if not performed properly.  Independent inspections are required to capture these ‘safety related’ errors according to M.A.402(a) and these should be carried out by at least two persons (the second person not necessarily CS, but at least appropriately qualified to perform the task), UNLESS otherwise specified by Part 145 or agreed by the competent authority.

Based on the EASA inspection, the Norwegian CAA has dedicated more focus on what the organisations do to prevent maintenance errors when performing audits. The AIBN considers this change a good contribution to flight safety.

In late 2015 the NCAA issued a presentation on Independent Inspections.

A re-inspection as an error capturing method should only be used in unforeseen circumstances when only one person is available to carry out the task and perform the independent inspection. The circumstances cannot be considered unforeseen if the organisation has not programmed a suitable “independent qualified person” onto that particular line station or shift.

Re-inspection of ones own work has “traditionally been a common practice in this part of Norwegian aviation” say AIBN (also see pages 145 and 162 of Helicopter Safety Study 3 [HSS3] were the value of a stricter regime was ranked ‘low’).  AIBN says that implementation of NPA 2012-04 (via Commission Regulation (EU)  2015/1536) from 25 August 2016 “will help to reduce the maintenance error risk, particularly in small organisations with marginal resources and staffing”.

The AIBN go on to summarise the safety responsibilities of key parties:

Aerossurance has previously written about several accidents and incidents that could have been prevented by an Independent Inspection:

Some of the lessons regarding lone workers doing complex maintenance tasks are reinforced by the UK Air Accident Investigation Branch (AAIB) report into the loss of tail rotor pitch control on a police AS355F2 G-SAEW on 21 April 2000 in Cardiff, UK.

Aerossurance sponsoringed an RAeS HFG:E conference at Cranfield University on 9 May 2017, on the topic of Staying Alert: Managing Fatigue in Maintenance. 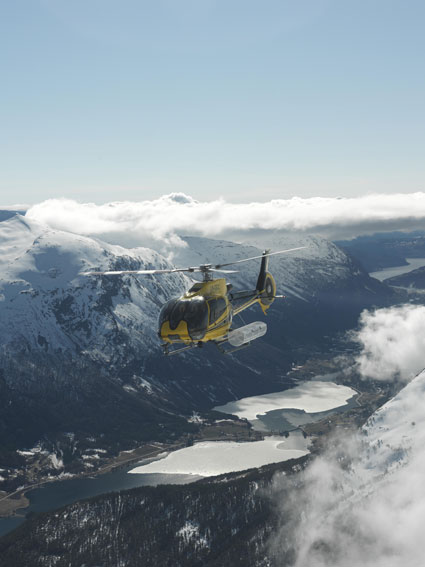