A US Air Force (USAF) accident investigation has paradoxically determined that a fire that caused  of damage in April 2015 was due to a maintenance error but that no human factors were involved.

On 30 April 2015 RC-135V Rivet Joint reconnaissance aircraft 64-14848 of the 343rd Reconnaissance Squadron, 55th Wing had commenced its take off roll at Offutt Air Force Base, Nebraska on a training flight. As the aircraft passed approximately 45 knots, multiple crew in the rear of the aircraft reported seeing a fire above the galley.  The take off was aborted and all 27 crew evacuated the aircraft (four suffering minor smoke inhalation).

The fire burned a hole through the upper fuselage above the rear galley area, damaging aircraft control and mission systems. The repair cost is estimated to be $62.4mn. 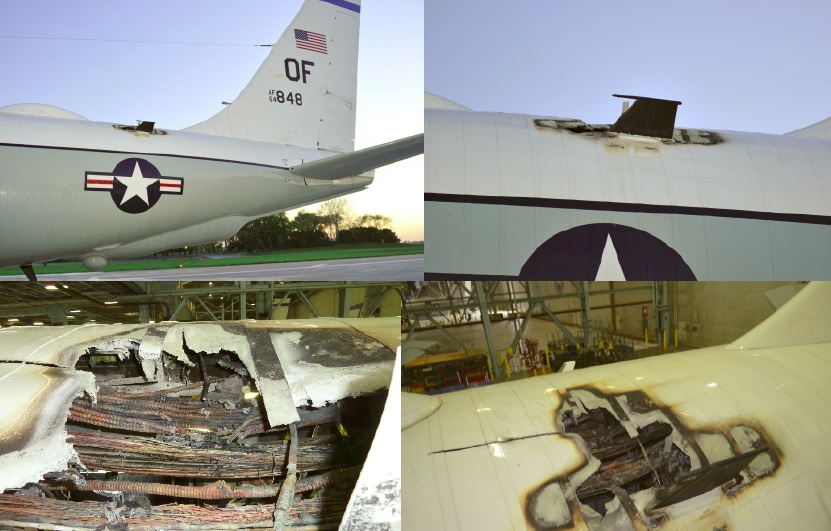 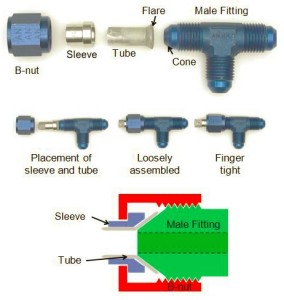 They includes B-nuts, the subject of one of our recent articles.  The B-nut and sleeve provide a clamping load to create a seal between the tube and fitting.

During investigation it was found that some B-nuts in the oxygen system were finger tight.  The USAF report states:

The board president found by preponderance of the evidence that the cause of the mishap was a leak in the high-pressure oxygen system due to poor assembly of the system tubing at depot maintenance. Failure by L3 Communications depot maintenance personnel to tighten a retaining nut connecting a metal oxygen tube to a junction fitting above the galley properly caused an oxygen leak. This leak created a highly flammable oxygen-rich environment that ignited. The resulting fire melted the retaining nut causing the tubing to become detached from the junction fitting, feeding more oxygen to the fire, increasing its size, and causing severe damage to the airframe, galley, and mission equipment onboard the aircraft.

AFI 91-204, Safety Investigations and Reports, 24 September 2008, Attachment 5, contains the Department of Defense Human Factors Analysis and Classification System [HFACS], which lists potential human factors that can play a role in any mishap. Human factors consider how people’s tools, tasks and working environment systematically influence human performance. There is no evidence that human factors contributed to this mishap. [Emphasis Added]

There is a HFACS Maintenance Extension (HFACS-ME), similar to Boeing MEDA, that could have been used to analyse the maintenance circumstances but unfortunately that does not seem to have been applied. The report does erroneously suggests the maintenance personnel did not follow a TPS dated May 2014 – i.e. after the work was actually done(!). The Air Force Times reports that:

Air Combat Command said no decision has been made on whether the company would be liable for the aircraft damage, calling it a “complex subject.” “The purpose of this report is to provide a comprehensive look at all of the factors that led to this accident,” ACC said in a statement. “The report does not suggest or recommend any actions, to include assigning accountability or liability. Discipline and administrative actions, if appropriate, are handled through command channels.”  [Emphasis Added]

UPDATE: The full AIB report with the ‘tabs’ is available here (WARNING 150Mb!!).  Tab J covers potential ignition sources.  The accident has been further covered and illustrated in this press report.

UPDATE 11 December 2018: Unwinding the Maintainer Mess USAF has “fixed its maintainer shortage this year, closing a gap that had grown to 4,000—6 percent of requirements—as recently as two years ago”.

UPDATE 16 February 2019: Sudden ignition during the replenishment of cockpit oxygen led to the blaze which severely damaged SCAT Boeing 737-300  LY-FLB at Aktau, Kazakstan on 16 June 2015.

The inquiry says the damage to an oxygen hose during the refill and the “instantaneous” combustion of a fine particulate mixture in the compartment, enriched and fed by the oxygen flow, led to the fire.

Aerossurance is proud to have sponsored a recent Royal Aeronautical Society (RAeS) seminar, Maintenance Human Factors: The Next Generation, at Cranfield University. In his opening address Professor Dave King (a former Chief Inspector of Air Accidents at the UK AAIB) highlighted that as well as thinking about the next generation in the industry we also need to think about a next generation approach to human factors in engineering. Presentations from that seminar are available here.