On final approach to Traverse City, MI on 26 March 2014 the Pilot Flying of a Cessna Citation Excel N580QS discovered that the aircraft rudder pedals were ‘hard or frozen’.  The results of the subsequent investigation published by the National Transportation Safety Board (NTSB) revealed an unusual dormant failure.

After a night stop in Florida on 25 March 2014, the aircraft departed for MI with 2 pilots and 2 passengers aboard on a Part 91 Subpart K: Fractional flight which was:

…uneventful until landing. The auto-pilot and yaw damper were turned off on final approach and the flying pilot (right seat pilot) noted the rudder pedals were hard or frozen during the landing. He was able to make an uneventful landing. Once safely on the runway, the flight controls were passed to the non-flying pilot (left seat pilot) to confirm the rudder pedal situation. The non-flying pilot confirmed the hard or frozen pedals. Once slowed to a safe speed, the rudder pedals were freed enough for the crew to be able to taxi to the ramp without further issues or assistance. After parking, the rudder still felt stiff and required more input that normal to operate. Once the airplane was powered down, the rudders pedals still had the same stiffness that was noted during the taxi. 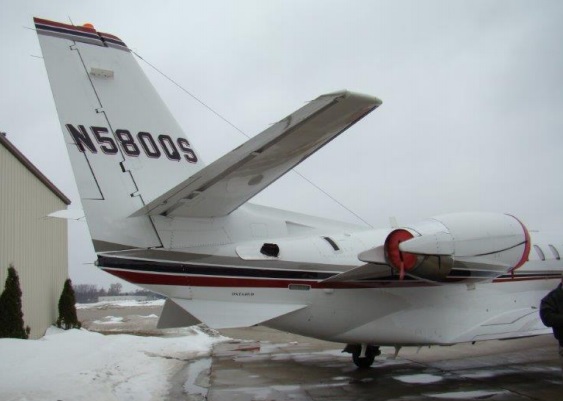 Water was observed draining from the black foam wrap around the [galley] drain tube’s heating element, and the black foam exhibited deformation consistent with the expansion of frozen water. 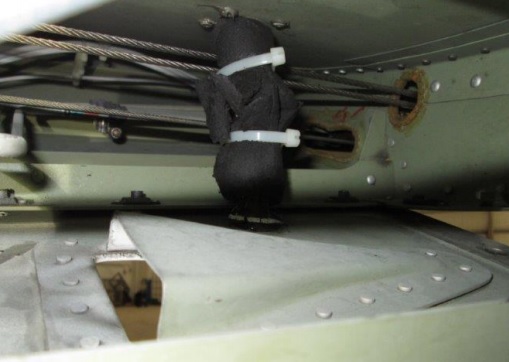 Removal of the foam revealed an opening in the drain tube. 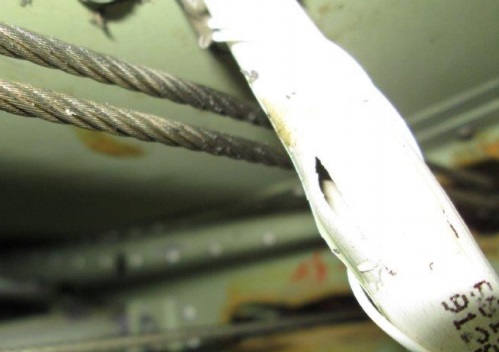 Hole in the Drain Tube (Credit: via NTSB)

Testing of the galley drain heating element revealed that it was inoperative. Black foam deposits were observed on a rudder cable, but no rudder system anomalies were detected. 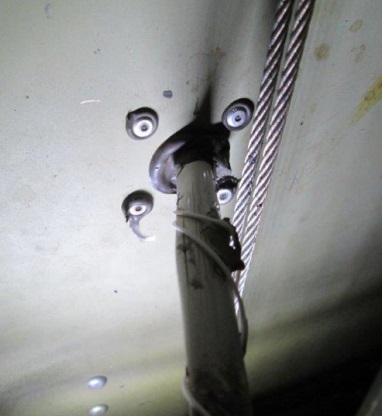 Laboratory tests revealed that an opening in the drain tube caused the rudder cables to freeze to the drain mast, and some additional force above a baseline was needed to break the simulated rudder pedals free from a static position. At the time of the incident, the airplane’s approved inspection program did not specify that the galley drain tube or heater should be inspected. Additionally, the failure of the galley drain heater is not annunciated to the flight crew nor to maintenance personnel.

The NTSB determined the Probable Cause of this incident to be: 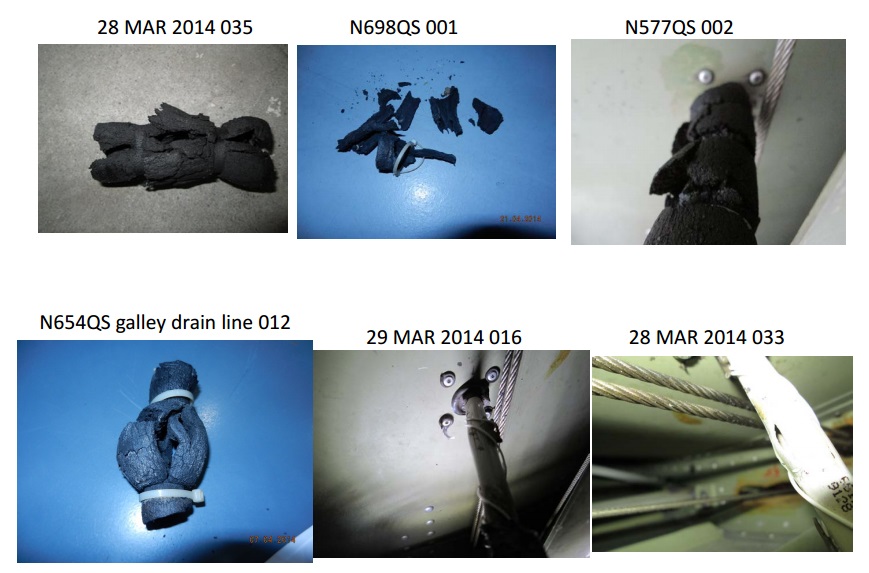 Deformed Insulation on Other Aircraft in the Fleet (Credit: via NTSB)

They subsequently stated to the NTSB:

As indicated in your report, failure of the heating element is not annunciated.  We are concerned with the effects undetected water and ice introduced into the galley drain area may have. As such, we believe the manufacturer should modify the aircraft inspection program to include an appropriate inspection/test of the galley drain heater and mast at a reasonable interval to ensure that they function as designed. The inspection/test may require addition of an indicator to notify crews or maintenance of heater failure.

The NTSB unfortunately have not chosen to make a recommendation and perhaps oddly report that:

…the manufacturer is designing an amendment to their maintenance manual which will include steps to engage and disengage the galley drain heater during maintenance and will include an operational test in the inspection requirements. The amendment is scheduled to be implemented in July 2015.

This footnote may partly relate to a completely different problem.  The Federal Aviation Administration (FAA) had previously issued a Special Airworthiness Information Bulletins (SAIB) CE-10-49 (first in September 2010 and then updating it in January 2011) on exactly the same part number (p/n 105881) on a range of Cessna Citations.  The SAIB dealt with a problem of the drain mast overheating during prolonged ground operation and catching fire.  The SAIB suggests that Cessna had planned to do the immanent Maintenance Manual change 5 years earlier.  While the action to solve one problem (overheating), may allow testing for dormant failures, it does introduce the risk of omitting to reconnect the heater.