On 18 February 2016 a Bell 206B3, N80918, operated by Genesis Helicopters, impacted the water of Pearl Harbour, Honolulu, HI during a scenic tour following a transmission component failure due to poor maintenance.

One passenger, a 16 year old boy, died in hospital 4 days later, after this Survivable Water Impact (SWI).  The pilot and two other passengers suffered serious injuries and a fourth passenger escaped with minor injuries.  The US National Transportation Safety Board (NTSB) safety investigation highlights some shocking maintenance standards.

During the local scenic flight the pilot explained that:

…as he began the approach to Ford Island [in the centre of Pearl Harbour], he noticed a vibration throughout the cabin of the helicopter that seemed “different.” He decided to return directly to HNL [Honolulu Airport]; however, the vibration stopped, and he made a left turn so the passengers could see the USS Arizona Memorial.

Shortly thereafter, the vibration returned, and the pilot called the air traffic control tower at HNL to advise that the flight would be returning to the airport.

The controller instructed the pilot to hold for other inbound helicopters, which implies no emergency was declared at that time.

…at this point, the vibration developed into a grinding sensation. Then the main rotor low rpm warning light illuminated, and engine rpm began to rise; the point where the engine and rotor RPM needles were no longer matched on the power turbine gauge. The pilot then lowered the collective, reduced the throttle and realized the engine and main rotor were no longer connected as he began to look for a place to land.

His first chosen landing site, the grassy area next to Pearl Harbor Memorial visitor’s centre, became impossible as the USS Arizona Memorial ferry had started to disembark there.

The 16 year old boy was trapped in the helicopter.  A number of ‘good samaritans’ near the memorial, including a police officer and a navy diver, made 5-6 attempts to free the boy from the submerging wreckage. When they did release him, he was taken to shore and treated by visiting medical personnel, although he died in hospital on 22 February 2016. The official cause of death was anoxic encephalopathy, or brain injury, due to drowning. 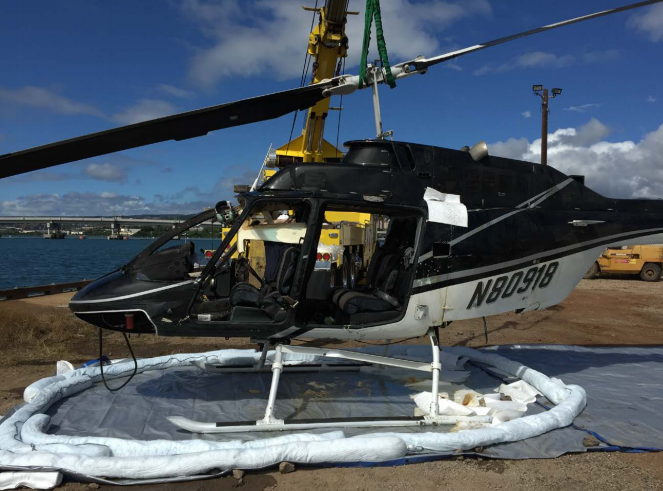 Genesis Helicopters and their FAA Oversight

They had a Letter of Authorization (LOA) from the Federal Aviation Administration (FAA) to conduct air tours within 25 statute miles of the departure airport under Part 91.147, a rather basic requirement with few obligations.

The owner told the NTSB that the FAA visited “kind of a lot” but when asked when the last visit was he said it had “been a while”.  A team of three (a Principal Operations Inspector [POI], Principal Avionics Inspector and Principal Maintenance Inspector [PMI]) should be assigned to LOA holders, it appears that only a PMI was assigned and he had only completed On The Job training 2 months before.

The owner was asked by the NTSB why he had not sought a Part 135 Air Taxi Operating Certificate:

He stated that it was due to the amount of time required to obtain a 135 certificate. He said it would take 1.5 years to get the certificate and he did not have the resources to dedicate to the project, which was another reason for hiring the accident pilot; he would have time to focus on the business side of the operation to complete the 135 process.

When asked why there were emergency floats installed on the helicopter, the owner stated “it was due to weight”.

They weighed about 150 pounds, which was the equivalent to one person. He said the helicopter did have a set of floats when they acquired it, but immediately took them off since they were not required.

‘Not required’ likely refers to federal regulations not requiring floats on aircraft operating close to shore.

The owner and mechanic’s assistant related that maintenance had been conducted to replace an engine-to-transmission drive shaft seal in late January 2016.  The NTSB explain that:

The drive shaft (as installed) is comprised of two identical couplings, which are located on either end of the shaft. The internal components consist of two flanges positioned on the ends of the tubular, hollow drive shaft. 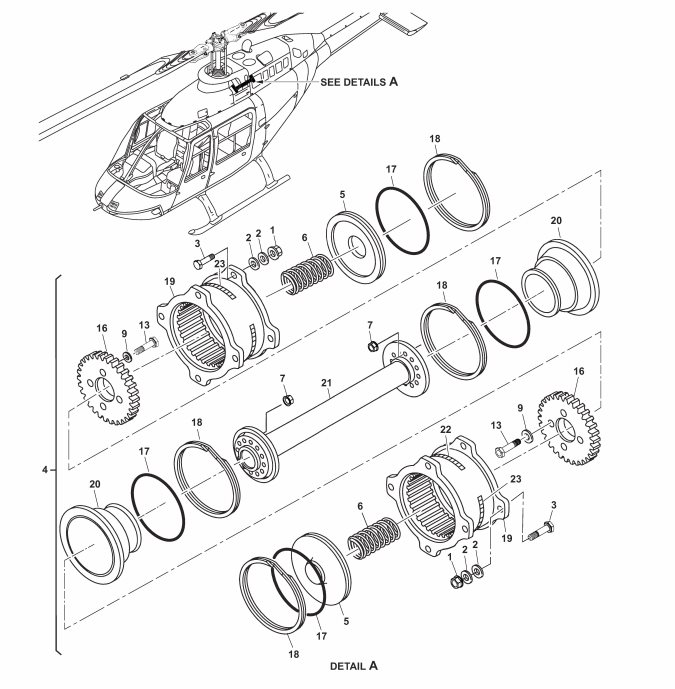 The drive shaft contains a gear sprocket [items 19] affixed to the shaft flange via 4 bolts (bolt heads positioned on the inside of the coupling). The donut-shaped gear has a hollow area in the middle that aligns with the hollow tube situated between the couplings; a slight lip surrounds the hollow area. The outer coupling gear surrounds the drive gear where it is splined, and torque is transmitted. Inside the coupling, the assembly is equipped with a shaft centering spring. The spring (item 6 [above]) is positioned between the lip and the end cap of the coupling (grease retainer plate). A retainer ring and packing seal rest against the back plate.

The BHT [Bell] maintenance manual recommends that, before reassembly, the engine-to-transmission drive shaft couplings be hand-packed with lubricant (C-015 grease) over the top of the internal spline teeth to a depth of 0.2-0.3 inch.

When records could not be found for this task the owner said that they “must not have gotten put in the logbooks”.

So maintenance was going unrecorded.  In fact the NTSB say:

No entries referencing a current annual inspection [or] current 100-hour inspection…were located within the airframe and engine logbooks.

The owner provided a component status sheet on February 21, 2016. There were several items that indicated negative time remaining before an inspection was due. 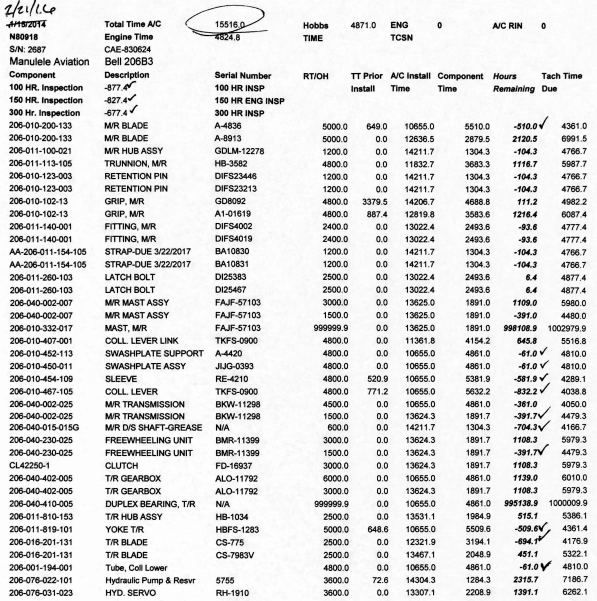 Several of these items were annotated with check marks; the owner indicated that these inspections had been completed, but the sheet had not yet been updated.

The NTSB asked about the negative-time items that were not ticked.  Some related to the engine and the owner stated a loan engine was installed so they could be worked upon.  However, when asked about the other items which were seemingly overdue, the owner accepted that the rotor Tension-Torsion (TT) straps were overdue.

The long list of other components were not discussed in detail.  It was also stated by the owner that (as stated in the NTSB’s transcript) “there would not have been anything like a countdown to an inspection”.

So there was no active control of scheduled maintenance and due tasks, with maintenance overdue.

In relation to the conduct of the maintenance:

The owner stated that he witnessed the initial build-up of the shaft, then left the hangar for about an hour to an hour and a half. When he returned, the mechanics assistant had already begun installing the shaft into the helicopter. The owner recalled asking specific questions about the bolts going into the shaft, to include if there was friction on the nuts, to which the assistant responded that there was.

The mechanic’s assistant recalled that:

Although the owner of the company was not present the entire time, he was checking the process and quizzed him on the parts and the type of grease used, and he was present to verify that the proper amount of grease was used before installing the shaft.

So supervision was suspect.  Furthermore the mechanic’s assistant said:

…he had re-used the same nuts, bolts, and washers to reassemble and reinstalled the short shaft.

The Bell Maintenance Manual required the use of new nuts.

So inappropriate parts were fitted.

No independent inspection was reported, though one is not required on a small aircraft in the US.

When the wreckage was examined… 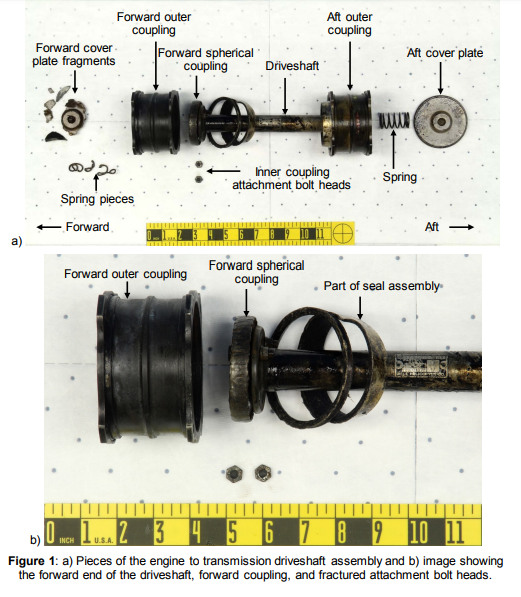 The engine-to-transmission drive shaft was sent to the NTSB Materials Laboratory for further examination. 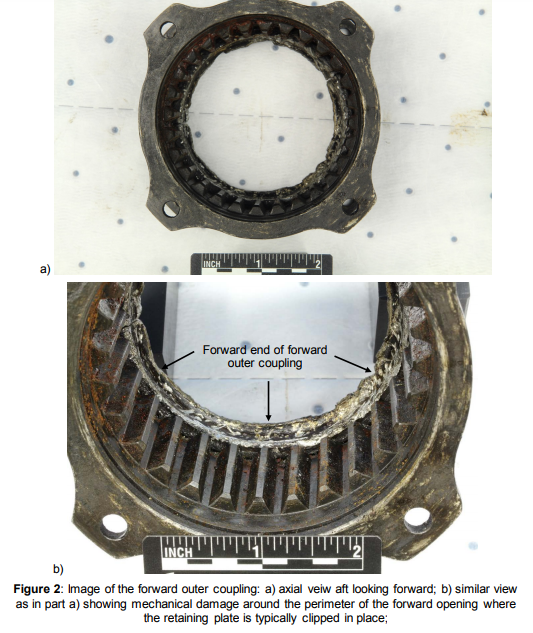 Interviews with the pilot, the owner of the company, and a non-mechanic rated maintenance assistant indicated that maintenance had recently been conducted on the engine-to-transmission drive shaft, even though this was not recorded in the helicopter’s maintenance records. In addition, the owner, who was a rated mechanic, was not present the entire time throughout the removal, inspection, and subsequent reinstallation of the engine-to-transmission drive shaft.

It is likely that, when this maintenance was conducted, grease was not applied to the forward coupling as specified in the manufacturer’s maintenance manual. Further review of maintenance records revealed no entries pertaining to a current annual inspection or 100-hour inspection. Additionally, a component inspection sheet provided by the operator revealed that several required component inspections were overdue and had not been completed at the time of the accident.

Although the FAA was conducting oversight in accordance with their guidance, increased inspections may have uncovered the inadequate maintenance and documentation, which in turn, may have prevented the accident.

The in-flight failure of the engine-to-transmission drive shaft due to improper maintenance, which resulted in low main rotor rpm and a subsequent hard landing to water.

We have looked at the poor culture of an air tour operator, weak FAA supervision and poor selection by ticket sellers (in that case cruise ship operators) here: All Aboard CFIT: Alaskan Sightseeing Fatal Flight

This article discussed errors greasing helicopter rotors: For Rotors Grease is the Word!