On 24 September 2019 Bell 206B C-GEBY of E & B Helicopters crashed shortly after take off from Campbell River, British Columbia, striking a building and two vehicles. The pilot (16,122 hours total time, 5,642 on type), the sole occupant, died and the helicopter was destroyed by the impact and a post-crash fire. 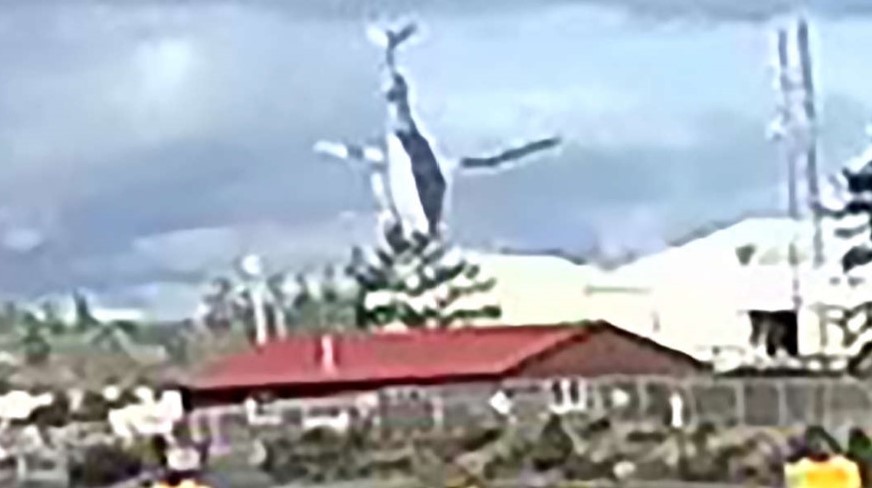 Enhanced CCTV Image of E&B Helicopters Bell 206B Prior to Impact (Credit: TSB)

The flight was intended to deliver supplies to a remote cabin at Moat Lake. The cargo (beer, groceries and firewood) was unsecured in the cabin (contrary to the requirements of the E & B’s Operations Manual). Two 20 lb cylinders of propane were also loaded in the baggage bay.

The Transportation Board of Canada (TSB) explain in their safety investigation report, published 8 December 2022, that:

Shortly after departure…the helicopter briefly levelled off at 615 feet above sea level, then began a descent. The investigation found that an engine power anomaly likely occurred while the helicopter was in cruise flight and, as a result, the pilot reversed course and entered a descent consistent with an autorotation. 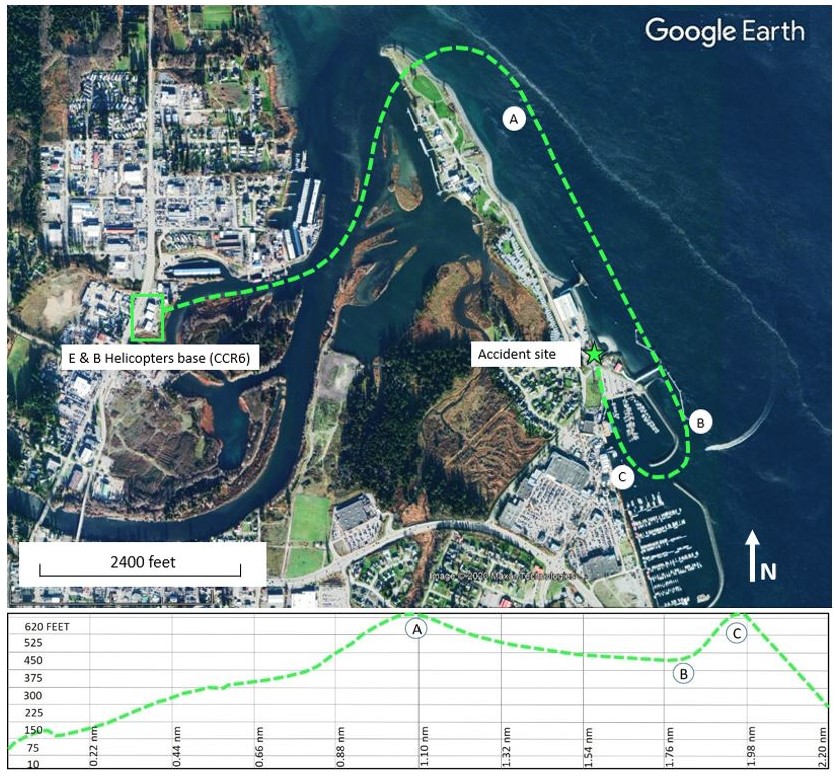 [A]t the accident site that the most aft section of the tail rotor drive shaft cover was found 25 m before the impact location, along the flight path. Impact marks on the drive shaft cover were consistent with it being struck by a main rotor blade; however, the underlying tail rotor drive shaft was not significantly damaged. Pieces of foam consistent with the material found in the core of the main rotor blades were located several metres from the accident site. 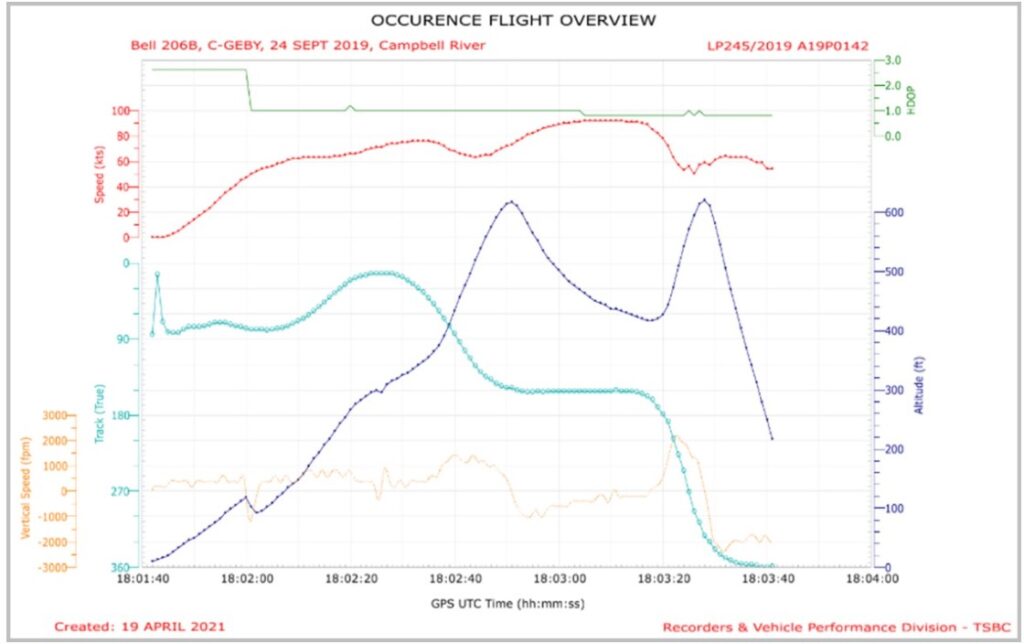 There were 33 witnesses to the final 20 seconds of flight:

CCTV footage of the impact indicated damage to the main rotor blades prior to the ground impact. 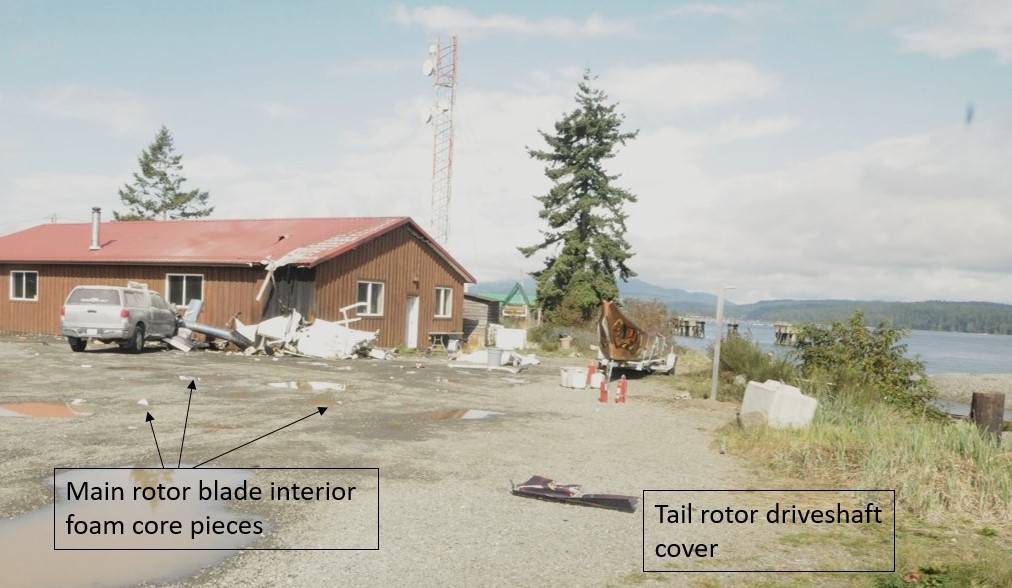 Examination of the engine revealed:

Aluminium shavings from crushing rotational contact between the compressor impeller and diffuser scroll had been blown back to the turbine section, but were not melted as they normally would be by the high operating temperatures found in the combustor section. This is consistent with an engine that has flamed out.

An engine power anomaly likely occurred while the helicopter was in cruise flight and, as a result, the pilot reversed course and entered a descent consistent with an autorotation.

…several indications of structural failure in flight. At some point during the flight, both main rotor blades became deformed.

Although indications of fatigue were present post-occurrence on a small portion of the trailing edge of one of the main rotor blades, the extent to which this fatigue contributed to the deformation could not be determined.

The TSB go on to state that…

…in the last moments of the flight, likely as a result of the deformed blades, the main rotor rpm decreased to a point that could not sustain autorotational flight, and the helicopter fell vertically and impacted the ground.

An 8 August 2020 accident to Van Horn blade-equipped Bell 206B N284S near Marathon, Texas was subject to an ongoing NTSB investigation at the time the TSB released their report.  In the Texas occurrence which left the pilot seriously injured and three passengers died:

[T]he pilot felt slight vibrations and informed the passengers he was going to conduct an emergency landing. The vibrations intensified with a loss of manoeuvrability, and the helicopter lost lift and impacted terrain short of the landing area.

Those main rotor blades are being examined by the NTSB Laboratory.

Although not mentioned by the TSB, Van Horn issued the following statement on 22 March 2022:

In cases where a 206L fitted with VHA main rotor blades is operating light—for example, with only a single pilot on board, less than a full tank of fuel and no cargo—the helicopter can experience a severe vertical hop in turbulent conditions.

When initiated by a gust at high speed, this very light aircraft configuration can allow an interaction to occur between the rotor blades and the nodal beam mount. The resulting vertical hop can become very uncomfortable.

This seems to be an unusual situation, but if the helicopter gets into this condition the appropriate action is to load the rotor by banking. By loading the disk, the frequency of the system is quickly changed, thereby resolving the issue.

The helicopter had been imported and the engine had been changed before it was put into service by E & B Helicopters in February 2019.  The Rolls-Royce 250 engine had previously been fitted to a Hughes 369.

During the installation of the engine, the company maintenance control system was ineffective at ensuring that the engine installation complied with the manufacturer’s recommendations, including having the correct accumulator and double check valve configuration for the Bell 206.

As a consequence of this, on 18 September 2019, during a flight in C-GEBY by the accident pilot, a main rotor rpm droop incident occurred (the rpm drooped by 20%).

…company maintenance contacted the helicopter manufacturer and it was determined that the fuel accumulator/double check valve configuration was not correct… The proper parts were ordered…and shipping records showed that the parts had been delivered on the day of the accident. However, they had not been installed at the time of the occurrence.

The pilot was aware of the situation, and other company pilots had been verbally cautioned by the chief pilot about an unresolved issue with the fuel system components and told not to fly the occurrence helicopter because it was still unserviceable. 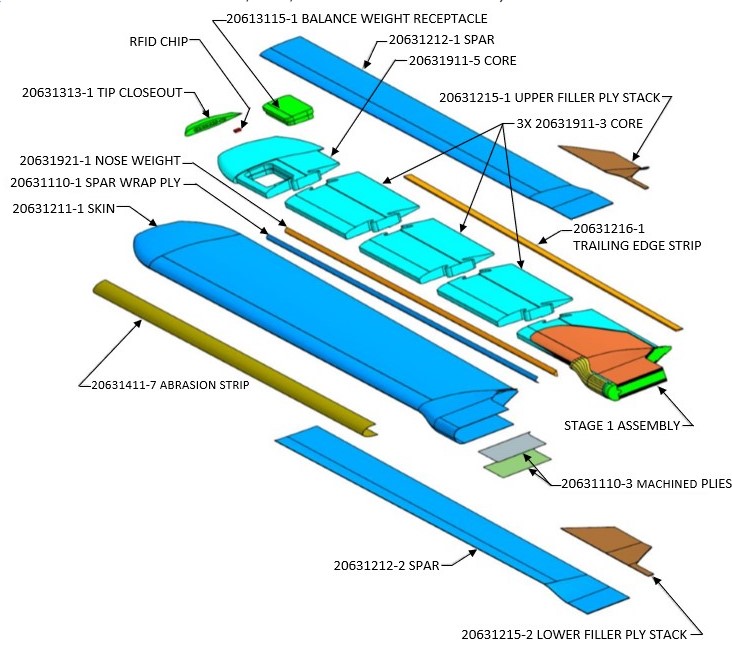 They were installed under Supplemental Type Certificate (STC) SH16-46 issued by Transport Canada (TC) on the basis of certification by the US Federal Aviation Administration (FAA).  TSB examined this certification.  The certification basis was FAR-27 Amendment 27-47 (issued 30 Jan 2012).  TSB explain for context that:

A structural fatigue test is a cyclic test, meaning that the rotor blade is not rotating during testing.  [It] is intended to ensure the continuing airworthiness of a structural component, the failure of which could be catastrophic.

A dynamic load assessment helps determine the maximum damage size to be introduced into the structural fatigue test specimen.

Each applicant must consider the effects of damage on stiffness, dynamic behavior, loads, and functional performance on all PSEs [primary structural elements] when substantiating the maximum assumed damage size and inspection interval.

However, TSB determined that…

….no dynamic assessment was carried out for the certification of the model of Van Horn composite blades installed on the occurrence helicopter.

The FAA’s interpretation was that Van Horn was allowed to omit this assessment because of the method of fatigue testing used. However, Van Horn’s fatigue test did not provide any assessment on the initial and residual stiffness. There was also no information on crack growth at the end of the fatigue test, which could provide another means of assessing change in the stiffness of the blade. TC was consulted [by TSB] for its interpretation of the requirement. TC’s interpretation…is that consideration for dynamic loading is required.

If data from a dynamic assessment is not available, the fatigue test may not discover structural responses associated with this damage. If a structural fatigue test does not include quantitative assessments and simulated damage that is of probable sizes and at critical locations as determined from a dynamic load assessment, the resulting airworthiness limitations may not be adequate to prevent failures or excessive structural deformations.

They also explain that:

The Van Horn composite blades are certificated on the basis of the “no-growth” method. This method is used to show that “the structure, with damage present, is able to withstand repeated loads of variable magnitude without detectable damage growth within a specified replacement time.” However, Van Horn’s quality assurance process has no established inspection for internal defects following production, or criteria for the permissible size of internal defects.

Therefore, it is possible that an unknown intrinsic flaw could exist following production that might exceed a predefined damage limit and would affect the structural integrity of the helicopter blades.

We have previously written about a fatal flight test accident during Van Horn’s testing of a follow-on blade design that occurred on 16 April 2019.

We have also written about a Sikorsky S-92A accident in Canada in which 17 people died where the TSB found that the design organisation and the FAA also interpreted harmonised certification requirements differently to other regulators.

Safety Challenges in a Small Organisation: Are SMS Scalable?

The pilot was the company’s owner, accountable executive, and operations manager…

Not surprisingly this individual had a big influence in this small organisation.  For example…

…direction on how the maintenance department was to respond to a partial loss of engine power that occurred a week before the occurrence came from him.

Many safety commentators claim that approaches to safety, such as Safety Management Systems (SMS), are scalable for use by organisations of varied sizes and complexities.  However, this accident highlights that effective SMS process can actually be more difficult to implement in smaller, less complex operations, especially when individuals have multiple roles without independent oversight:

[M]any operational and maintenance-related decisions were being made based on a single opinion, rather than a process of validation by a hierarchy of independent and skilled supervisors.

In the years before the occurrence, the company was busy and aircraft were used frequently and, as a result, those carrying out the organization’s operational and maintenance supervisory roles made and executed decisions in the interests of safety and regulatory conformance, as required. Occasionally, however, these decisions were overruled by senior management.

Within the year before the occurrence, revenue decreased and financial factors became a priority in both operational and maintenance-related decisions. As a result, senior management overruled these supervisory decisions more frequently.

The latest TC ‘process inspection’ of E & B occurred just a week before the accident.  TC recorded no findings of non-conformance. This could indicate that the TC process inspection methodology was not capable of timely detection of changes in management priorities and decision making and the associated change in risk.  However, TSB do not elaborate on the effectiveness of regulatory oversight.

TSB do discuss generalities of safety culture.  However they also state that:

One might conclude that this is more related to the behaviour of the owner / accountable executive / ops manager / pilot than the influence of the organisation’s culture on their behaviour.