A combination of inadvertently leaving cockpit lights dimed after an early morning take off, a compromise when modifying the helicopter for night vision goggles, a type without an aural low fuel warning and negligible recent experience on type all featured in a recent double engine flameout in New Zealand.  While it occurred in different circumstances this incident is interesting to compare against two fatal police helicopter double flameouts (the 2013 Glasgow Clutha accident and the 2005 Shizuoka City accident).

The New Zealand Transport Accident Investigation Commission (TAIC) have recently reported on a 5 May 2014 occurrence when Kawasaki BK117B2 helicopter ZK-HJC experienced a double engine power loss during a hospital patient transfer flight from Ashburton to Christchurch. 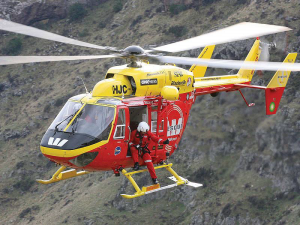 The pilot made an emergency landing onto farmland near Springston.  The 5 occupants were uninjured and the helicopter suffered only minor damage.  The operator, Garden City Helicopters, operated several helicopters and fixed-wing types for a variety activities, including Helicopter Emergency Medical Services (HEMS).

About 20 minutes later a loud bang was heard by everyone on board and an aural warning sounded in the cockpit. The pilot noticed the right engine low-revolutions-per-minute light had illuminated and that the instrument readings for the right engine were decreasing. Shortly afterwards a similar banging noise was heard and the helicopter started to descend rapidly. The pilot realised that both engines had now lost power and he entered the helicopter into autorotation and…made a firm landing in a paddock near Springston. After the emergency landing the pilot checked the cockpit instruments and switches,..

The pilot stated these positions had not been changed during the flight.

The BK117 fuel tanks are located below the cabin floor.

It was therefore important that the transfer pumps were switched on during flight to ensure that an adequate supply of fuel… was maintained. 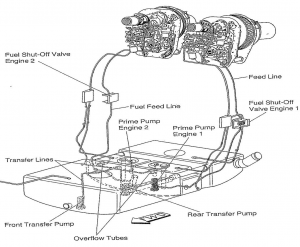 In the case of early model BK117s, the fuel system had symmetric fuel supply tanks. meaning they could both run dry near simultaneously, whereas:

Later helicopter designs…incorporated fuel supply tanks of different capacities. This meant that in helicopters such as the EC135, if the transfer pumps were inadvertently left off, one engine would lose power at least a minute before the other. This would leave the pilot with one engine running and more time to recognise what the problem was and to recover the situation by turning the transfer pumps on before the second engine lost power.

The original central annunciator panel contained warning (red) and caution (amber) lights. In normal flight operations there would be no lights illuminated on the panel.

A ‘FUEL LOW I’ (left tank) or ‘FUEL LOW II’ (right tank) caution light illuminated if either the left or right supply tank (respectively) fuel level dropped to below 23 kg.

A ‘FUEL PRESS I’ (left engine) or ‘FUEL PRESS II’ (right engine) warning light illuminated if the pressure in the left or right (respectively) engine fuel pump inlet dropped to below 5.8 pounds per square inch.

While the cockpit instrument lighting has a variable rotary dial, the annunciator panel has just two settings: bright and dim.

The BK117 was not designed to have an aural warning to alert pilots to low fuel levels in the supply tanks.

There is a low-engine-speed warning horn that would sound as the engine shut down.

The colours of the warning and caution lights were changed from red and amber respectively, to amber and yellow.

The intensity of the lights was also changed, and the caution lights were noticeably less bright on the dim setting when compared with an unmodified lighting system.

After each helicopter was modified the lighting system was assessed as part of the certification of the modification.   The emphasis was checking there was no light interference with the NVGs, and that the pilot could see and interpret all the lights in the cockpit at night with NVGs on or off.  Additionally daylight readability was checked.  These assessments were subjective.

The test procedure guidelines for assessing daylight readability state that if the lights have brightness control (a dimmer) this test should be conducted at various settings. However, in practice this test is not normally done with the dimmer on, the rationale being that the pilot is unlikely to dim the lights during the day.

In this case the pilot had conducted his pre-flight and before-start procedures at Christchurch in the early morning around dawn, and had turned the dimmer on. He had subsequently forgotten to turn the dimmer off for the daylight flight from Ashburton.

While checking the dimmer was part of the operator’s written checklists, there use was not considered obligatory, despite being a reliable way to reduce the likelihood of human error.

Consequently, the two caution lights on the central annunciator panel that should have alerted the pilot to the fact he had forgotten to turn on the fuel transfer pumps at Ashburton would have been very difficult to see.

More recent modifications have incorporated light-emitting diode (LED) warning and caution lights [rather than filters] that are more efficient and easier to read when dimmed.

The pilot held a commercial pilot licence (helicopter)… issued by the CAA in July 1988. He had gained a type rating on the BK117 series helicopter in September 2007, and at the time of the incident had 267 hours’ flying experience on that type, and a total of 9,336 hours on helicopters.

The pilot…was rated on all aircraft types used by the operator, and at the time of the incident was approved to carry out commercial operations in four of them.

The pilot had flown 25 hours in the previous 30 days and four hours in the previous seven days. Nearly all of this flying had been in another helicopter type, the [single engined] AS350. The exception was a 12-minute flight in the BK117 the day before the incident flight, which included three take-offs and landings and made him legally current to operate the BK117.

The operator in this case did not have any additional requirements or procedures above or beyond the legal currency required under CAR Part 61. A review of the pilots logbook revealed that in the three years preceding the incident he had flown the BK117 type on five occasions without having met these currency requirements.

Prior to the [12 minutes] re-currency flight the day before the incident, the pilot had flown the BK117 on two occasions for a total of 1.6 hours in the preceding 12-month period.

…according to his training records had not been assessed for his aircraft type knowledge or checked for competency on the BK117 since 2009. Most of his annual recurrent training and competency checks during this period had been carried out on the AS350 type of helicopter.

…[he] was only required to fly [the BK117] when none of the three full-time BK117 pilots was available.

TAIC go on to say:

Inadvertently applying procedures specific to one operation to another similar but different operation is a recognised human error. In the context of human factors in aviation it is sometimes called ‘negative transfer’.

The transfer from one cockpit to another — of different design or configuration — of habits or responses that were appropriate in the former but are inappropriate in the latter, thereby posing a threat to flying safety (Aviat Space Environ Med. 1982 Dec; 53(12):1224-6).

Having experience and currency on the helicopter type is one way of reducing the likelihood of it happening.

The types of operations carried out included general charter work such as scenic flights, air transport, commercial work and lifting, as well as search and rescue, medical transfers and flight training.

The operator used five different types of helicopter, and many of the pilots flew more than one aircraft type during their employment.

The company had seven senior people responsible for crew training, flight operations, competency assessment and quality management. For the helicopter fleet, the flight operations manager and training manager were both current BK117 pilots who did most of the flying on the type for the company.

The training manager had not conducted any check or training with the [incident] pilot on the BK117, and did not regularly fly with him.

The competency manager, who was also the chief pilot, did not conduct the competency checks for the operator, and did not regularly fly with all the pilots who flew the BK117.

It was unclear from the company operations manual and check and training manual who within the company was ultimately responsible for ensuring that all pilots were adequately trained, current and competent. The duplication and overlapping of responsibilities meant there was no clear delineation of duties. This management arrangement made it difficult to work together cohesively to maintain an effective oversight of pilot currency and competency.

The pilot’s lack of recent experience on the BK117 was a contributory factor in this event, including the absence of any recent training or competency assessment on the aircraft type. The pilot did not refer to a checklist when carrying out the normal pre-flight, before-start and after-start procedures. Had he referred to a checklist he would have likely corrected the error in the fuel system configuration before flight. The company that operated the helicopter did not have any procedures in place to address the lack of recent experience, such as additional training, supervision or a policy on the use of written checklists in such a situation.

A contributing factor to the power loss was the pilot’s inability to detect the caution lights that would have alerted him to the incorrectly configured fuel system, due to the cockpit lighting dimmer switch being left on in daylight. A modification of the helicopter to enable the use of night vision equipment was found to have adversely affected the readability of the caution lights during daylight, when the cockpit lighting dimmer was on. A design feature of the BK117 fuel system meant that both engines lost power within seconds of each other.

TAIC made the following findings:

We have also written about another unsuccessful modification programme that left an aircraft with a latent defect: