On 21 June 2021 at 21:45 local time, Bell 407 N512TP of the Tampa Police Department (TPD) was damaged in a hard landing at the Tampa Executive Airport, Florida during autorotation landing training using a Night Vision Imaging System (NVIS).  The pilot and instructor were uninjured. 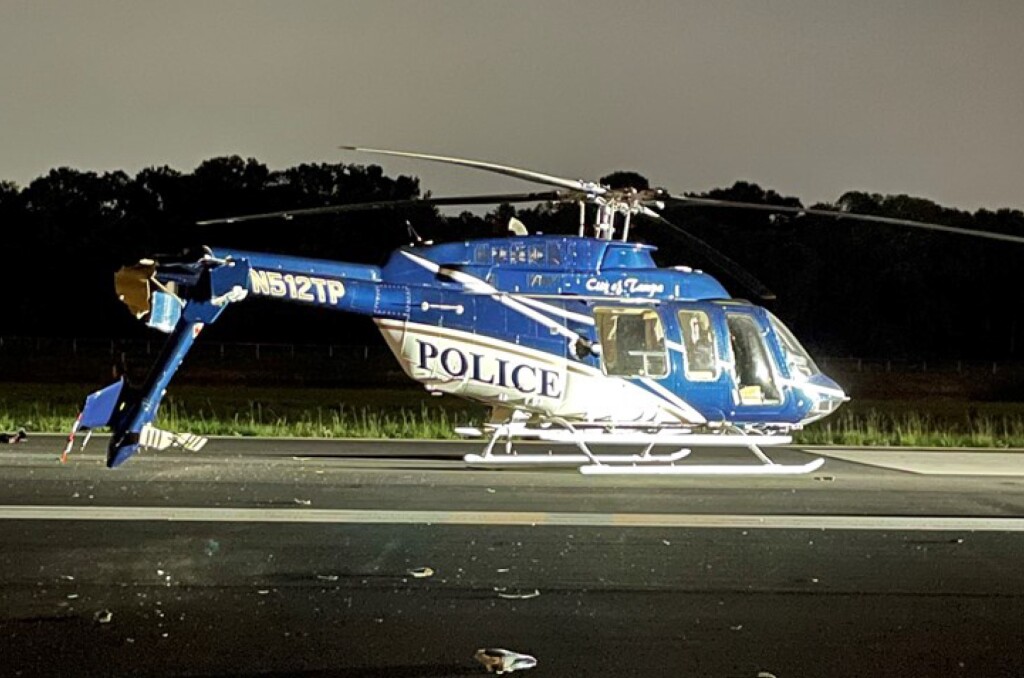 The US National Transportation Safety Board (NTSB) safety investigation report, published on 19 October 2021, explains that the police pilot had 2721 hours of experience, 1472 on type and the contracted instructor had 2047 hours, 112 on type.  Their experience operating with Night Vision Googles (NVGs) is not recorded by the NTSB however. A number of exercises had already been successfully conducted that evening in the Garmin 500H equipped helicopter.  For this exercise:

The pilot determined where on the runway he was going to land and entered the autorotation at an approximate airspeed of 60 knots. When the helicopter was about 90 to 100 ft above the ground, and the engine rpm was at 99-100%, he entered the flare. At the bottom of the flare, the pilot “bumped” up the collective to arrest the rate of descent and levelled out at what he thought was about 7-10 ft above the runway. At that point, the pilot said it felt like the bottom of the helicopter started to fall out from underneath him.

Pulling collective had no effect on arresting the sink rate.

The low rotor rpm horn sounded right before the helicopter landed hard on the runway. The impact was sufficient to flex the main rotor blades and sever the tail boom.

The training provider reported that the police pilot had “conducted hundreds of NVG power-off landings to this exact location”.  However, since the last one the runway had been repaved.  Meanwhile the instructor had not done training at that site but knew it had been used successfully by colleagues for many years when training the TPD. The training provider noted that:

The newly paved runway is a deep, dark black color. Due to this fact, its Albedo is near zero. The previous runway color was light gray with mid to high Albedo.

Albedo is a non-dimensional, unitless quantity that indicates how well a surface reflects solar energy. Albedo commonly refers to the “whiteness” of a surface, with zero meaning black and 1 meaning white. A value of zero means the surface is a “perfect absorber” that absorbs all incoming energy.

They comment that the new surface would therefore be “like a black hole”. EASA explain in GM1 SPA.NVIS.140:

Contrast is one of the more important influences on the ability to correctly interpret the NVG image, particularly in areas where there are few cultural features. Any terrain that contains varying albedos (e.g., forests, cultivated fields, etc.) will likely increase the level of contrast in a NVG image, thus enhancing detail. The more detail in the image, the more visual information aircrews have for manoeuvring and navigating. Low contrast terrain (e.g., flat featureless desert, snow-covered fields, water, etc.) contains few albedo variations, thus the NVG image will contain fewer levels of contrast and less detail.

Although the profile was correctly flown by the flight crew, the crew encountered a near zero Albedo of the runway surface in the final, most critical aspect of the maneuver which is during the power-off landing phase. This caused an optical illusion of false height and speed relative to the ground. Once a contrasting element was visual (1000’ touchdown zone) which is white in color (extremely high Albedo), the crew immediately realized their situation and reacted appropriately by leveling the helicopter and adding all the collective remaining to slow their rate of descent. Any attempt to go-around or adding throttle may have worsened the situation.

While the instructor’s statement does mention checking the RADALT, the pilot’s statement doesn’t explicitly.  The EASA GM referenced earlier, for example states: “NVIS lighting system and a radio altimeter must be installed and operational” and the associated AMC requires that “crew coordination procedures, including…use of the radio altimeter on an NVIS flight” be defined on the Operational Manual.

The NTSB accepted this conclusion and adopted the following probable cause uncharacteristically promptly, just four months after the accident:

The pilot’s improper landing flare while making a power off practice autorotative landing. Contributing was the decreased visual cues provided by the recently paved runway during the night landing conducted with the aid of night vision goggles.

Disappointingly the NTSB probable cause statement however misrepresents the human as ‘the cause’ and the human factor merely ‘a contributor’.