On 14 June 2018 MD Helicopters MD600N ZK-ILD of Helicopters Hawkes Bay made a forced landing while conducting an aerial visual survey of farmland at Ngamatea Station, near Taihape, with 5 persons onboard. The helicopter was destroyed and one occupant died. 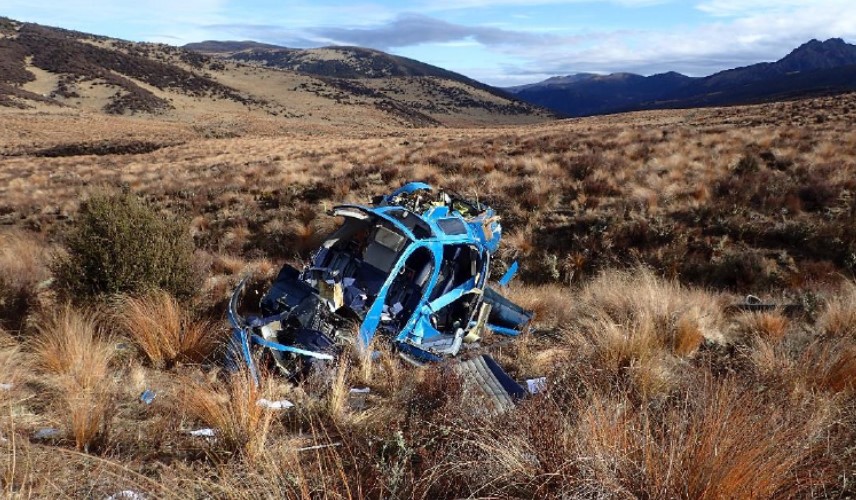 The pilot was type rated for the MD600N, with 45 hours on type and 9,659 hours total helicopter time.  The pilot was also the chief executive of the operator and the senior person responsible for flight and ground operations.

Approximately 24 minutes after departure and while descending at about 300 feet above ground level, the pilot informed the occupants by intercom of a problem with the helicopter. The pilot continued to fly on a relatively straight flight path for about another 1,300 metres, before turning the helicopter to the left and descending to land. The pilot did not inform the occupants that they were about to land

The helicopter struck the ground hard and remained upright, while the engine continued to produce high power. The helicopter became airborne again and rotated about 90 degrees to the right before it hit the ground again.  This, combined with an imbalance in the rotor system from the ground impact damage, resulted in a severe shaking of the airframe, which destroyed the helicopter. 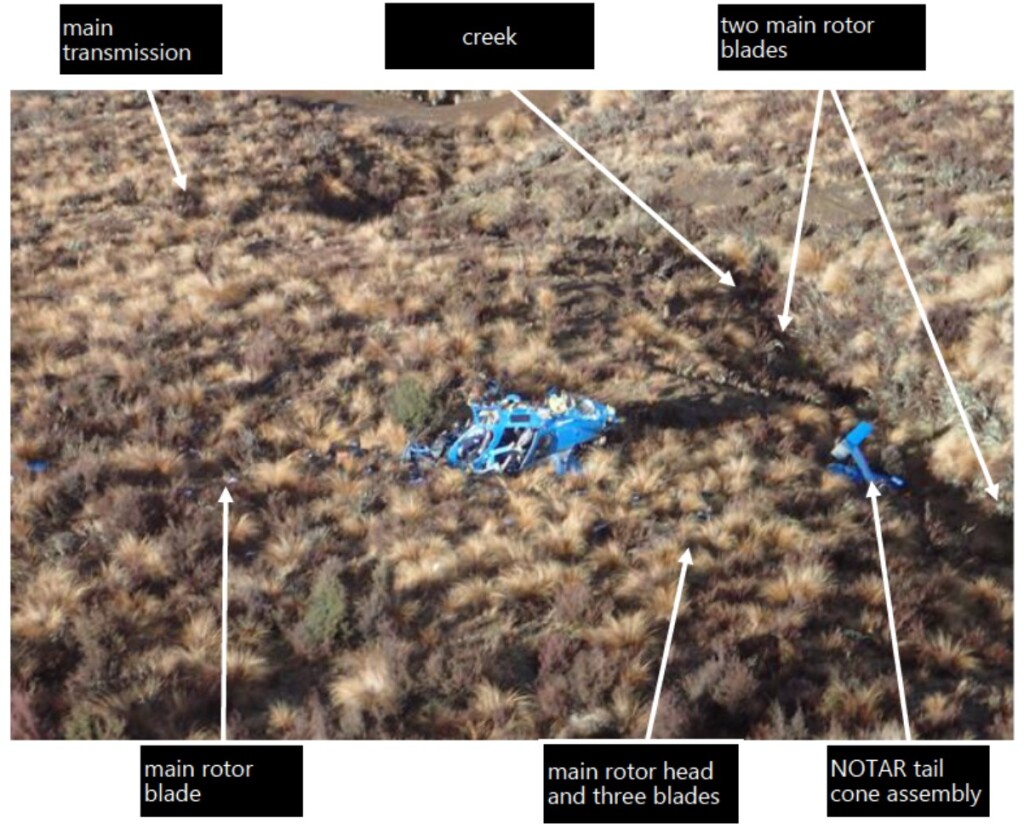 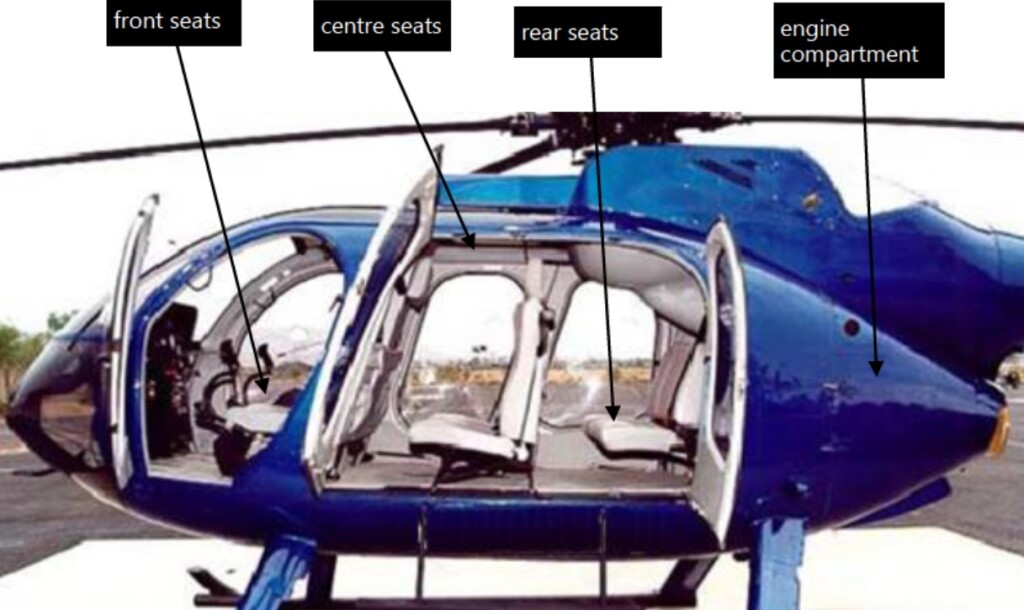 The TAIC Safety Investigation and Findings

During the survey flight, the helicopter’s electronic engine control unit detected and recorded a number of faults, resulting in the ‘full authority digital engine control’ [FADEC] system changing to ‘fuel flow fixed’ mode. The fuel flow fixed mode resulted in the rotor speed varying beyond normal operating parameters. The pilot was not able to control the varying rotor speed and a forced landing ensued. 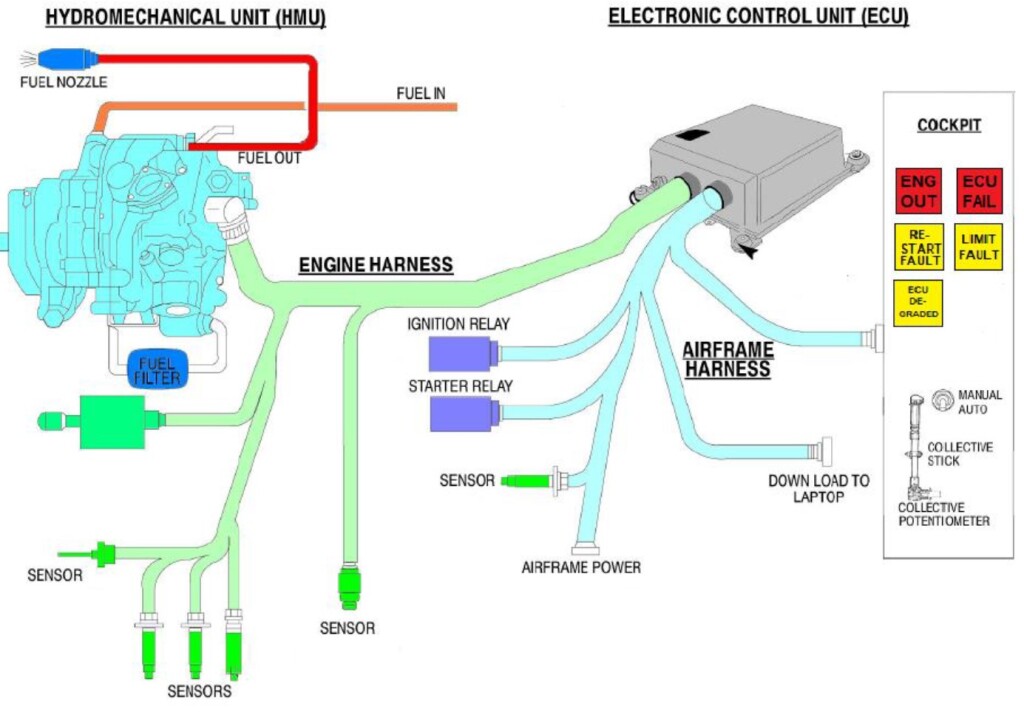 [The] automatic governing of the engine power failed due to an undetermined intermittent fault. The intermittent fault had occurred on previous occasions. It was likely that it had not been rectified due to its intermittent nature and the difficulty in performing fault diagnosis using the flashing light method.

That method was used as the licenced engineer “did not have access to a computerised maintenance tool”.  Consequently, they were required to observe a sequence of flashing caution lights and compare them to a list of faults in the maintenance manual.

The FADEC system was not switched to manual mode, which would have allowed the pilot to control the engine power. This was likely influenced by the pilot’s misunderstanding of manual mode and emergency procedures.

The pilot of the accident helicopter and the two other MD600N pilots interviewed expressed some concern regarding the use of, and training in, manual mode. This concern was predominantly associated with the risk of over-speeding the engine and rotor32 when transitioning from automatic to manual mode.

The limited local training provided regarding the MD600N FADEC system likely contributed to the pilot’s misunderstanding of aspects of the FADEC system and emergency procedures. The instructor used discretion when electing not to conduct a practice of switching to manual mode in flight.

It was likely that the reluctance of the instructor to practise the use of manual mode in the MD600N during training was perpetuated by a lack of information and guidance [in the Flight Manual or other manufacturere’s data], resulting in a perceived high level of risk.

The helicopter manufacturer advised the Commission that a procedure existed for training pilots in the use of manual mode. However, this procedure was proprietary information and not available outside the manufacturer’s own training organisation.

To assist in training, some other helicopter types are equipped with a throttle position indicator. This assists the pilot to more accurately select the required throttle setting when conducting emergency procedures training. [On the MD600N] there was no means for pilots to match throttle position and engine speed when transitioning to the FADEC system’s manual mode. This likely contributed to the pilot’s stated reluctance to select the FADEC system’s manual mode in flight.

TAIC conclude that a ‘key lesson’ is:

A pilot’s technical knowledge and understanding of aircraft systems is essential to their interpretation of and response to malfunctions.

They go on to state:

We would observe though that a manufacture is doing a great disservice to its customers and pilots of its aircraft types if essential knowledge of aircraft systems is treated as proprietary and only provided in in-house training.