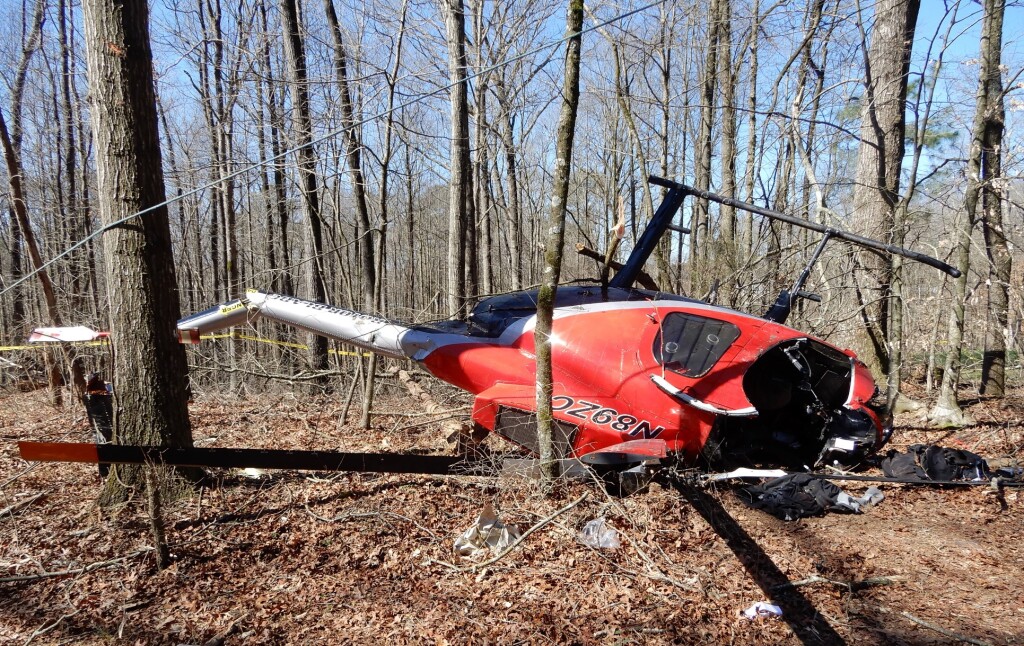 The Accident and NTSB Safety Investigation

The US National Transportation Safety Board (NTSB) explain in their safety investigation report that three passes were planned (upper, middle, and lower):

A witness reported that the pilot performed the upper pass, then returned for the middle pass when the helicopter began to rotate counterclockwise around the main motor mast. It completed one full rotation, and during the second rotation, the helicopter impacted trees and then the ground. 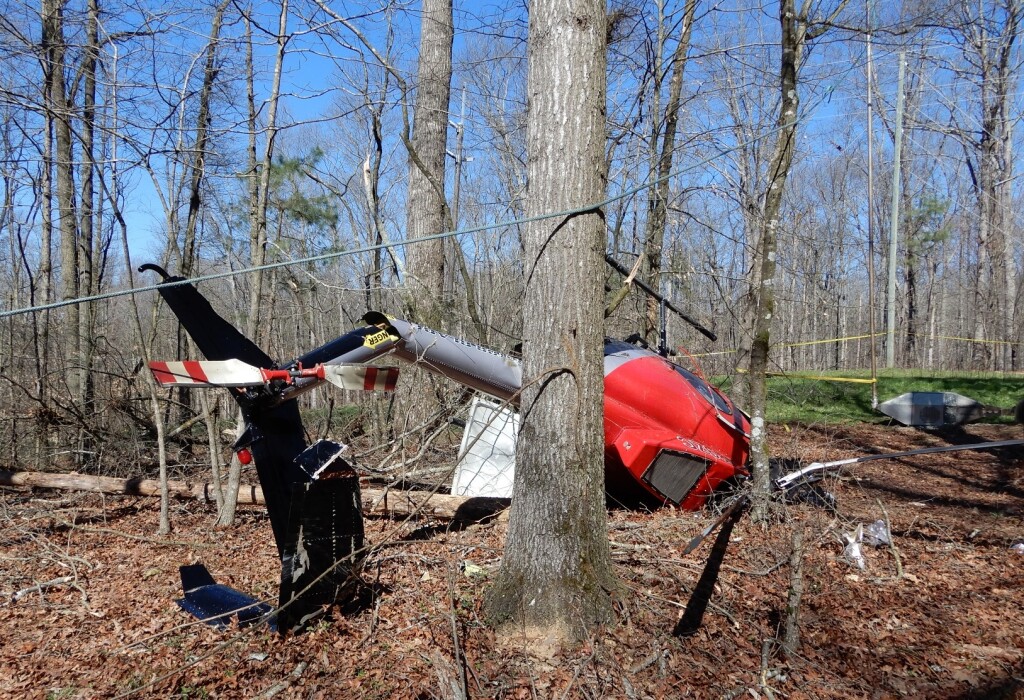 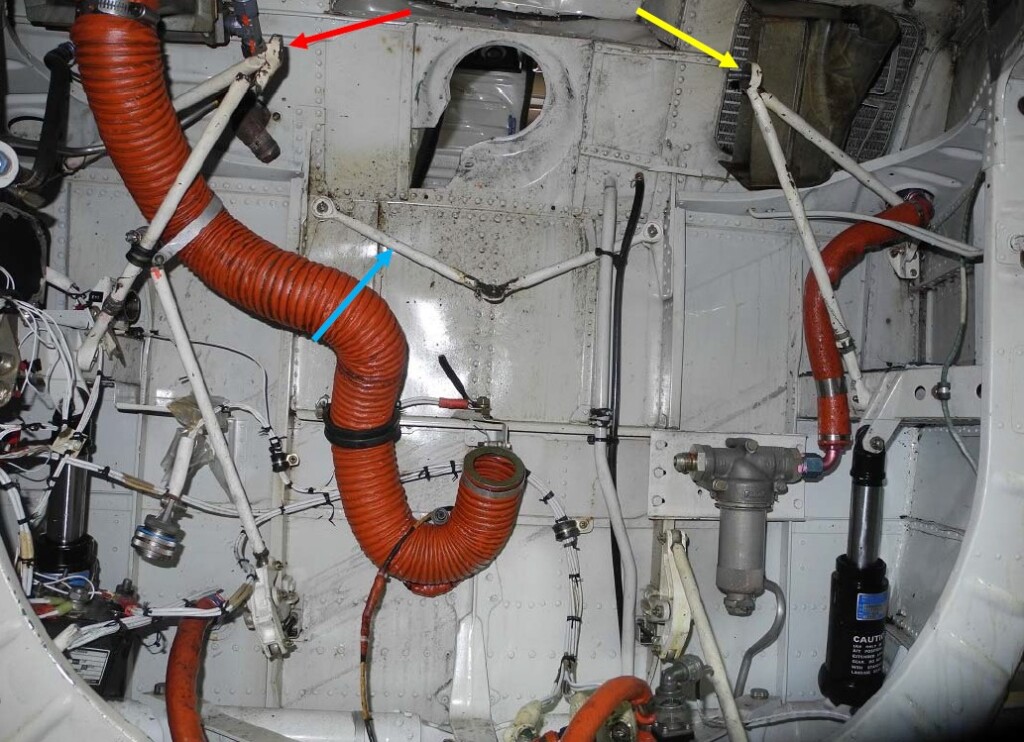 The failure of the overrunning clutch subassembly outer race resulted in a loss of power to the main rotor system. 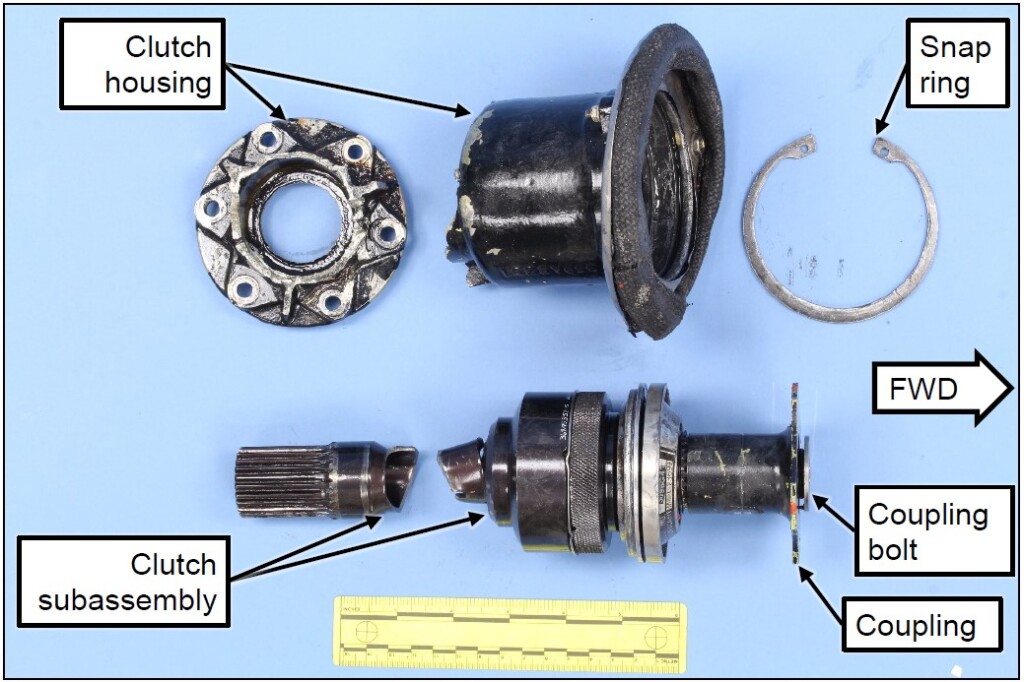 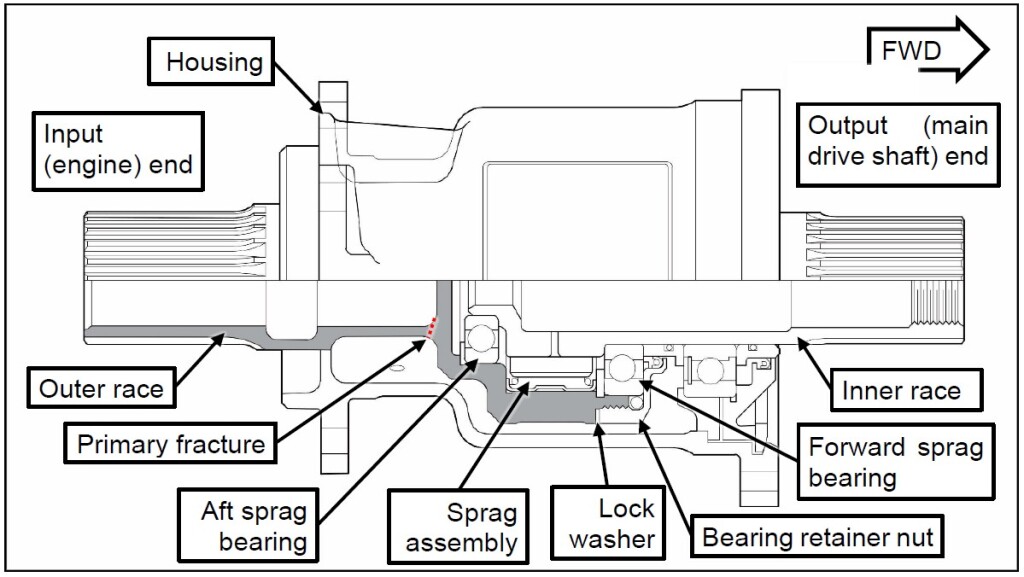 Given the helicopter’s low altitude and airspeed at the time of the loss of power, the pilot was likely unable to successfully initiate and perform an autorotative landing.

The investigation identified that:

Before its installation…the overrunning clutch subassembly had been repaired, which included the installation of a new outer race.  The accident helicopter operated with the overrunning clutch subassembly for about 33 flight hours until the accident occurred. Examination of the fracture surfaces revealed signatures consistent with fatigue and subsequent overload. The orientation of the crack in the circumferential plane was consistent with an anomalous bending load, such as an angular misalignment of the drivetrain, that drove fatigue crack initiation.

The investigation went on to determine that…

…it is likely that the damaged center engine mount was the source of the anomalous bending loads… The 100-hour/annual inspection of the engine mounts could be performed with the engine installed on the airframe, and the operator had done so; however, the presence of the engine could present difficulties for a mechanic in performing a visual inspection, particularly of the forward side of the center engine mount, where the cracks were located. Maintenance records indicated that, in the 9 months preceding the accident, the engine mounts were inspected six times with no anomalies observed. However, when the engine mount cracks may have developed and whether they would have been visible during any of the previous inspections could not be determined based on the available information.

A fatigue failure of the overrunning clutch subassembly due to abnormal bending loads due to cracks on the center engine mount, which resulted in an inflight loss of power. Contributing to the accident was the helicopter’s low altitude and airspeed when the loss of power occurred, which precluded the pilot from successfully performing an autorotation.

Not discussed in this accident report but the 1981 built helicopter had suffered three previous accidents. On 6 November 2009, while operated by Extreme Helicopters, the helicopter lost engine power less than a minute after takeoff in Baxley, Georgia.  It rolled over onto its left side during the subsequent autorotation and suffered substantial damage. The pilot told the NTSB this was “main fuel valve was pulled causing fuel starvation to the engine.” On 29 July 2014 while undertaking an aerial saw task for Rotor Blade LLC in West Liberty, Ohio alongside a railroad track, the engine lost power due to fuel exhaustion and the helicopter descended into the trees, again receiving substantial damage.

The helicopter was topped off with fuel before the accident flight, and it had been flown 1 hour 50 minutes before the accident. The operator stated that the fuel tank holds 62.4 gallons, and the pilot reported that the helicopter consumes about 30 gallons per hour. It is likely that the pilot did not adequately monitor the fuel quantity during the flight, which resulted in a total loss of engine power due to fuel exhaustion. 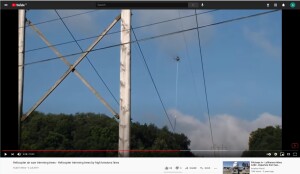 Video of an Aerial Saw In Action

Additionally, on 22 August 2018, during a powerline inspection for Rotor Blade LLC, the helicopter suffered a wire strike on a crossing 230 kV cable in Ridgeway, Pennsylvania.

…the passenger [from First Energy] spotted a previously unseen power line in their flightpath, so the pilot “pulled hard aft cyclic with right pedal,” but the main rotor blades struck the power line. The helicopter’s main rotor system began vibrating, but the pilot was able to land without further incident. 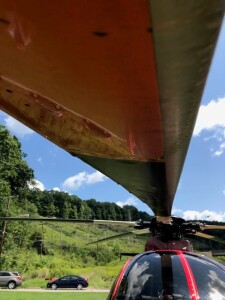 The helicopter sustained substantial damage to the main rotor blades.

Curiously, these previous accidents, and the aircraft’s return to service after each one, are not examined by the NTSB.