On 26 September 2019 Airbus Helicopters AS350B2 3A-MLC, owned by Monaco Heli-Loc, suffered an engine failure and was damaged during an emergency landing in the French Alps. 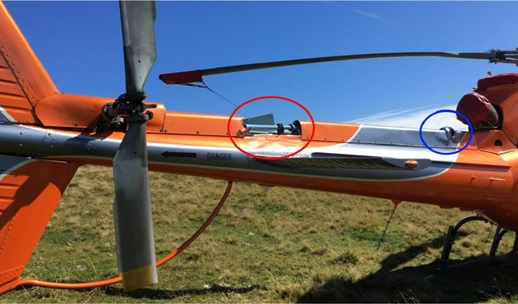 The French Bureau d’Enquêtes et d’Analyses pour la Sécurité de l’Aviation Civile (the BEA) explain in their safety investigation report (issued in French on 24 June 2021) that the helicopter was in cruise with the pilot and three passengers onboard. The pilot, a PPL(H) holder with 600 hours total time, noticed the engine chip warning light illuminate and decided to divert to Megève altiport. 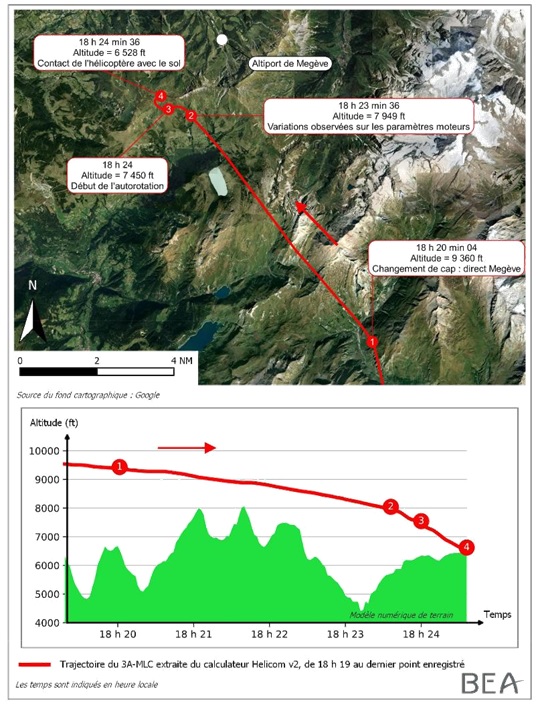 Shortly after starting the descent, the pilot heard ‘a suspicious noise’, after which he retarded the engine to idle and started an autorotation. A witness saw the helicopter descending, heard a ‘detonation’ and saw smoke coming from the engine. During the final approach to Col de Véry (2,000 m), the pilot attempted to increase power. However, during the flare, the main rotor struck the tailboom and the tail rotor drive shaft was severed.   The helicopter came to a rest upright on its skids having touched down at low vertical speed.

The helicopter was equipped with a Helisafe monitoring system.  The data was downloaded and analysed by the BEA. 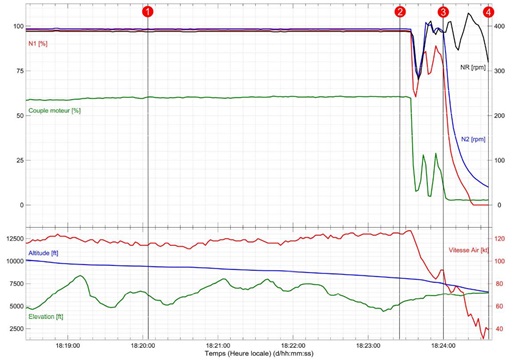 The investigators concluded the engine chip light came joint before Point 1 9marked in red above), when the helicopter turned towards the Megève.  Until Point 2, four minutes later, the engine parameters are normal.  However, between Points 2 and 3 fluctuations in the recorded engine parameters indicate rapid engine deterioration.  From Point 3 free turbine speed (N2) and gas generator speed (N1) rapidly diminish and engine torque drops to zero. The main rotor speed (NR) is also no longer synchronised with N2, indicating entry to autorotation.  The investigators determined that the drop in NR in the 9 seconds preceding contact with the ground likely corresponds to the flare performed by the pilot. 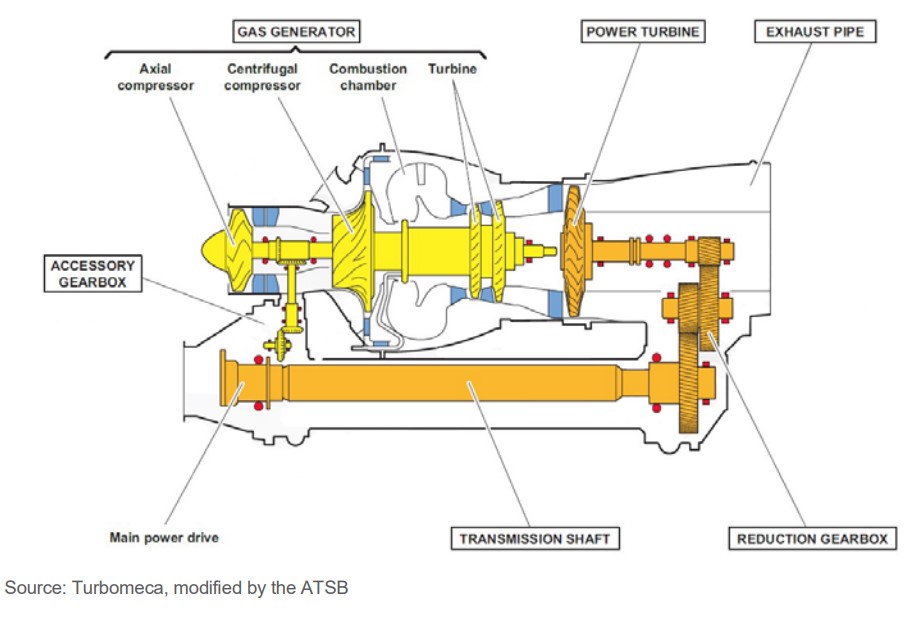 Safran Arriel 1B from Airbus AS350B2 3A-MLC After Forced Landing: Note Presence of laterite in the hollow shaft (left) and the injection wheel (right) mating to the hollow shaft
(Credit: BEA)

Laterite is both a soil and a rock type that is rich in iron and aluminium.  It commonly occurs in hot and wet tropical areas.

The BEA determined that:

Damage to the rear bearing of the gas generator is characteristic of degradation under the phenomenon of unbalance. The origin of the unbalance very probably comes from the partial detachment of the laterite present in the hollow shaft. The unbalance caused damage to the rotating parts of the engine, including the bearings, with the generation of metalic debris which found its way into the engine oil circuit and led to the warning light coming on during the flight.

The BEA examined the history of this engine:

Laterite covers about 40% of the surface of Madagascar. Therefore, the engine had therefore spent considerable time in dusty laterite environment.  Alert Service Bulletin (ASB) A292 72 0230 (original issued in 1998 and last updated in 2001) introduced inspections on PRE TU 360 mod state engines which have been used in such an environment. This ASB was made mandatory by a DGAC Airworthiness Directive (AD).

By monitoring the wear of the blades of the axial compressor of the module 2 in accordance with this ASB it is possible to define if cleaning of the gas generator is necessary to combat the build-up of laterite in the hollow shaft .  Such a build up can create an unbalance, the deterioration of the rear bearing, and ultimately an uncommanded shutdown.  This SB was further enhanced in 2012 and made mandatory by EASA AD 2012-0071.

The investigators looked at the engine maintenance history.  In September 2010, at 2,859 operating hours, the ASB inspection was conducted during the installation of a new module 3.  Erosion of the axial compressor blades (module 2) was noted but was within limits and did not require further action.  Until the time of the accident no further shop visits were required in which the hollow shaft was accessible.  The accumulation of laterite was therefore not visually detected.

There was a change in subcontracted Continuing Airworthiness Management Organisation (CAMO) in 2015.  While aware of the ASB, the new CAMO was unaware that the engine had been previously operated in a dusty environment.  Therefore, they did not call for the ASB and the monitoring of wear on the compressor was not conducted, eliminating the remaining means of early detection of bearing deterioration due to laterite accumulation.  There is an implication the previous CAMO had also not called for the application of that ASB either.

The incorrect assessment…as to the environment in which the engine operated did not allow [as per the ASB] a periodic cleaning of the hollow shaft of module 3.

The determination of the cleaning periodicity of the hollow shaft of the module 3 depends on the conditions of use of the helicopter. The initiation of the ASB and associated operations although being the responsibility of the CAMO…requires that pilots and operators be aware the importance of notifying the CAMO of dust exposure times, changes in missions and encountered flight conditions.

It is very likely that this communication between the different actors was faulty or incomplete and led the successive CAMOs to underestimate the conditions in which the helicopter was operating during these years.