A pilot made an excellent forced landing in rising mountainous terrain, on 27 June 2017 in Airbus Helicopters EC130B4 N151GC following a loss of engine power near Boulder City, Nevada.  The helicopter was being operated by Papillon Grand Canyon Helicopters on an air tour flight. 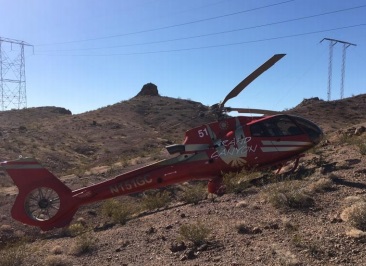 The pilot and 4 passengers were uninjured.  Two other passengers sustained minor injuries.  The aircraft was damaged.

The pilot reported that, as he executed an “S-turn” about 3,000 ft mean sea level, the helicopter made a subtle yaw to the right, which was accompanied by an audible “gong.” The pilot lowered the collective and simultaneously noted a yellow engine parameter failure indication on the instrument display. Moments later, the main rotor rpm warning horn activated and was followed by warning lights on the caution warning display. The helicopter began to descend immediately.

The pilot elected to perform an autorotation to a nearby helicopter pad. In the attempt to steer away from power lines, the pilot made a left cyclic input; however, the retreating main rotor blade contacted a power line. The pilot continued to maneuver the helicopter and subsequently made an up-slope emergency landing on rising mountainous terrain.

The helicopter was powered by a Safran Arriel 2B1 turboshaft engine.

Postaccident on-site engine examination revealed that both the gas generator and power turbine were seized and could not be rotated by hand and that there was a significant amount of heat damage to the turbine blades and thermocouples. The vehicle and engine multifunction display recorded multiple engine temperature exceedances during the accident flight. Metal particles were found on the accessory gearbox [AGB] magnetic plug. Further, no oil filter was found installed in the airplane [sic].

The last maintenance performed on the engine was 109.6 hours prior to the accident at the Safran HE USA facility, Grand Prairie, Texas. On June 30, 2016, the facility received the accessory gearbox for an overhaul. The oil filter was removed and discarded as part of the normal process for arrival inspection.

During the document review, it was determined that the overhaul was not due, and the operator agreed to have the accessory gearbox sent back as is.

The maintenance organisation correctly shipped the AGB with a log card entry “Equipment returned repairable, not repaired, not airworthy as is” and without a serviceable tag.  They reportedly did not inform the operator that they had commenced maintenance on the AGB and removed the engine oil filter.

That log card entry was subsequently voided, on the instruction of the maintenance organisation Quality Manager, “after being questioned by the operator thus reverting the airworthiness back to the previous entry”.

Although not discussed by the NTSB the implication is there was an incomplete shared-understanding of what work had been performed before the overhaul was cancelled.

The engine was rebuilt and operated for 109.6 hours without the oil filter installed this…

…led to coke pollution that obstructed the oil jet and resulted in the subsequent oil starvation of the axial compressor rear bearing oil and its subsequent failure.