The US National Transportation Safety Board (NTSB) have concluded the Virginia State Police (VSP) Aviation Unit Bell 407 helicopter, N31VA, that crashed during surveillance of a violent ‘white nationalist‘ rally in Charlottesville, Virginia on 12 August 2017 had entered a Vortex Ring State (VRS).  The helicopter impacted the ground, there was a post-crash fire.  The pilot and the observer were fatally injured. 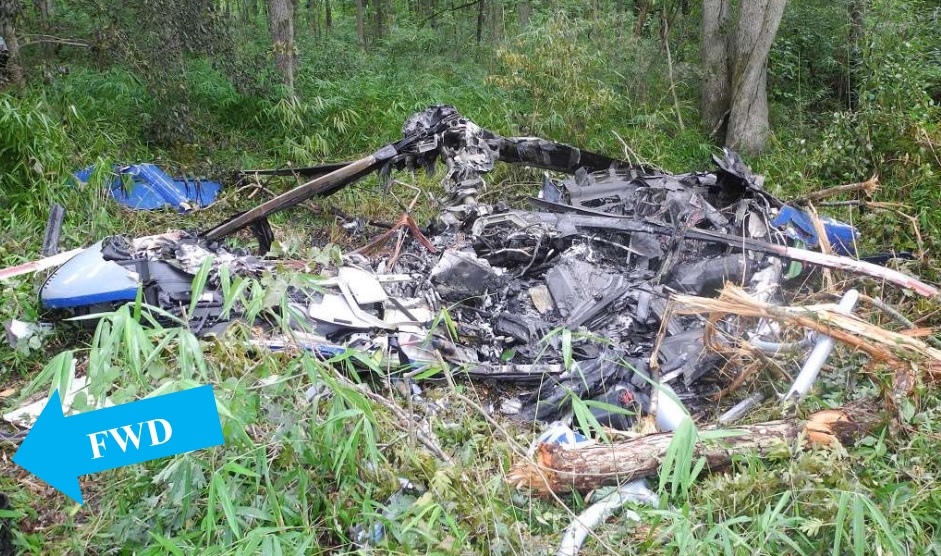 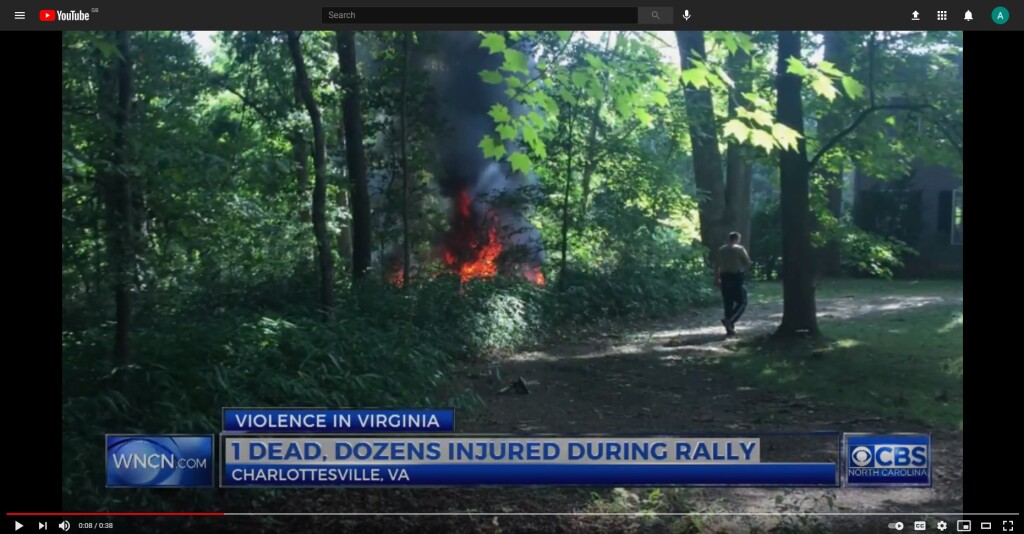 The NTSB explain in their safety investigation report (issued 13 July 2020) that:

…the purpose of the flight was to provide the VSP command center with a continuous video downlink of the public demonstrations that were occurring in Charlottesville. The helicopter departed Charlottesville Albemarle Airport (CHO) about 1600. The helicopter arrived over the area of the demonstrations at 1604 and remained there until 1642 when the flight crew was tasked to provide overwatch for the Governor of Virginia’s motorcade. At 1643, the flight crew advised the VSP command center that the helicopter was heading directly to the motorcade and was about 30 seconds away. 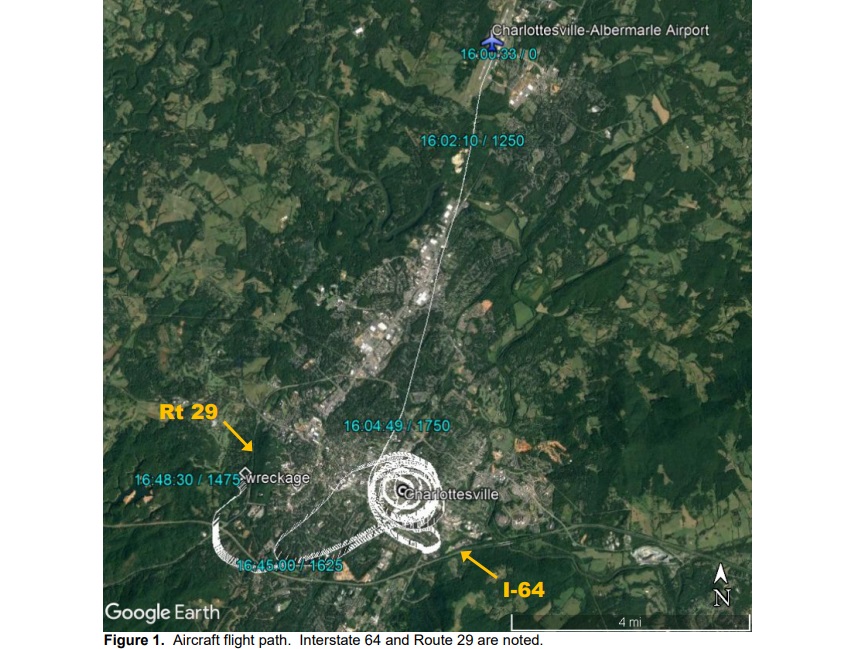 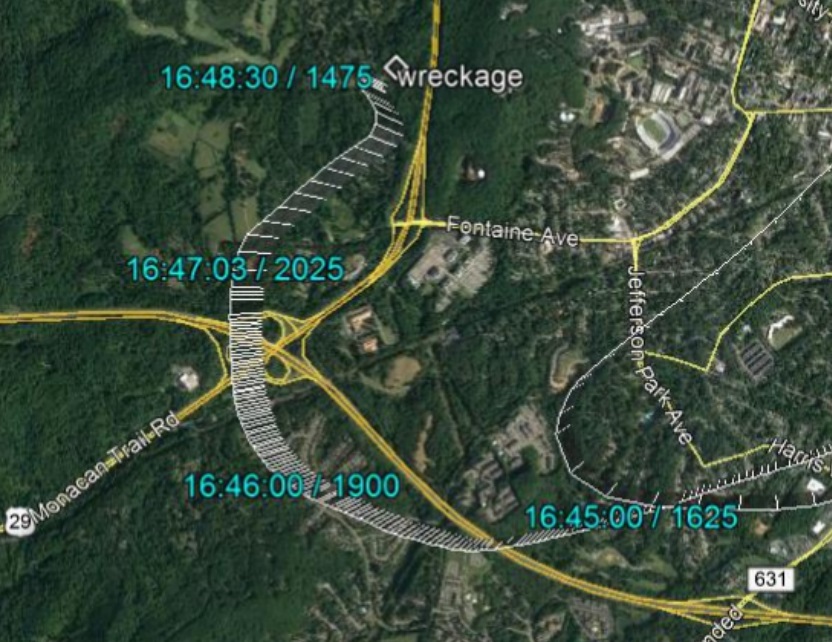 Shortly afterward, the helicopter descended below the area of radar coverage, and radar contact was lost. 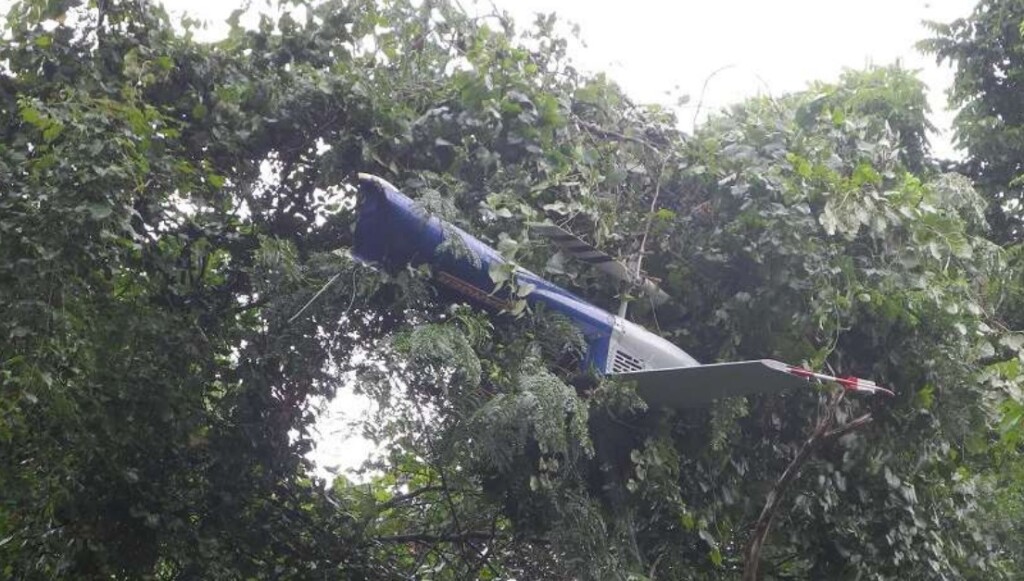 Video from a security camera…captured the helicopter…descending vertically at a constant acceleration and with increasing negative vertical speed until ground impact. 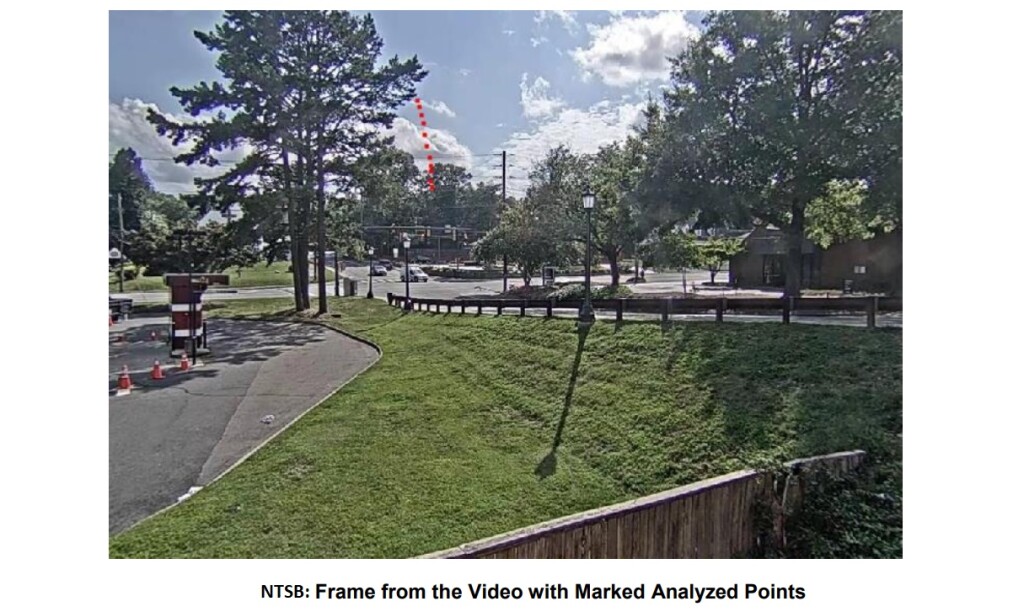 Photographs of the accident helicopter that were taken by a ground witness revealed that, about the time that the helicopter began its vertical descent, the helicopter was yawing to the right at a rate between 87° and 97° per second.

Toward the end of the flight, the helicopter’s low forward airspeed while descending was consistent with the helicopter entering Vortex Ring State (VRS). 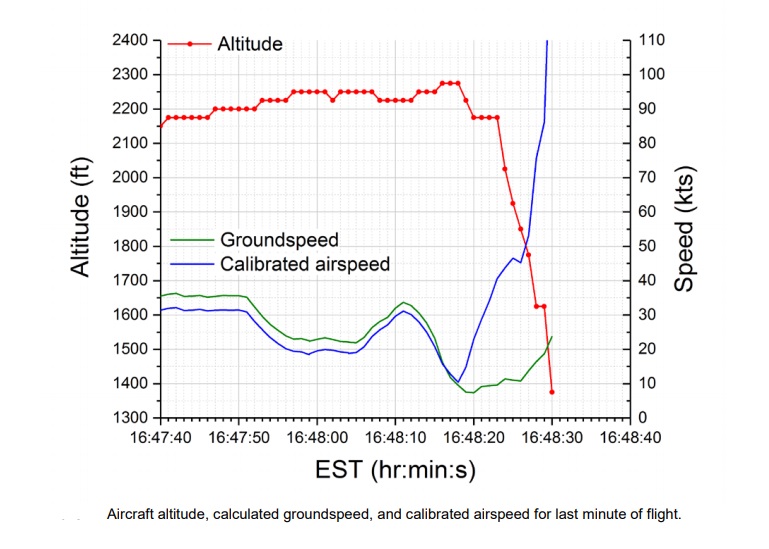 Examination of data from the Rolls-Royce 250 engine control unit…

…revealed a sharp increase in torque, from 54% to 104% immediately before the helicopter’s descent.

Insufficient left pedal input with increasing torque can result in a right yaw that can develop into a spin. 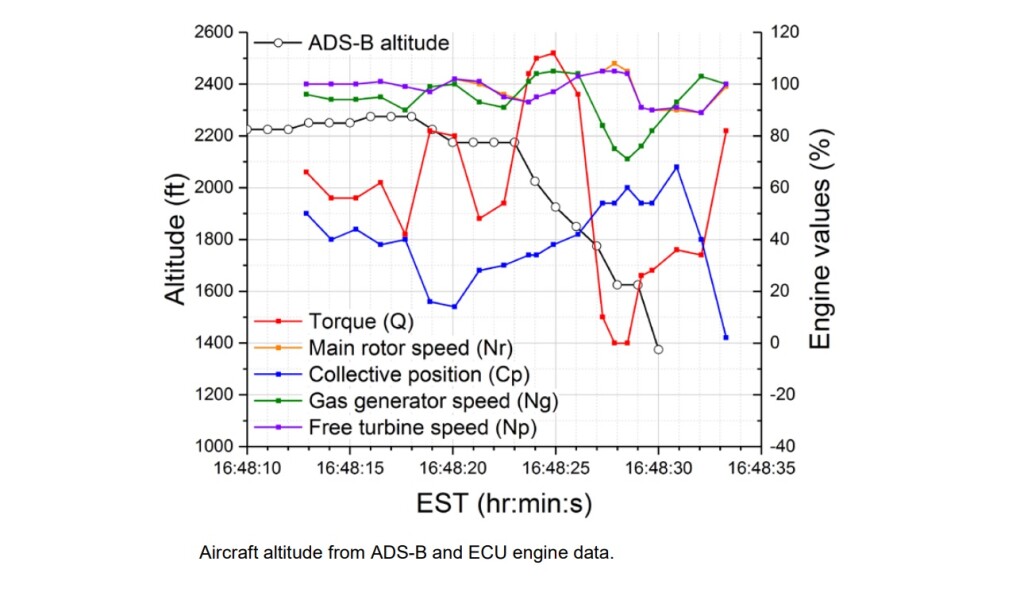 Bell Helicopter provided the NTSB with the area of predicted vortex ring state for a Bell 407 with a gross weight of 4,633 lbs at sea level. [The graphic below] shows this predicted area with the aircraft’s forward speed and average vertical speed overlaid. 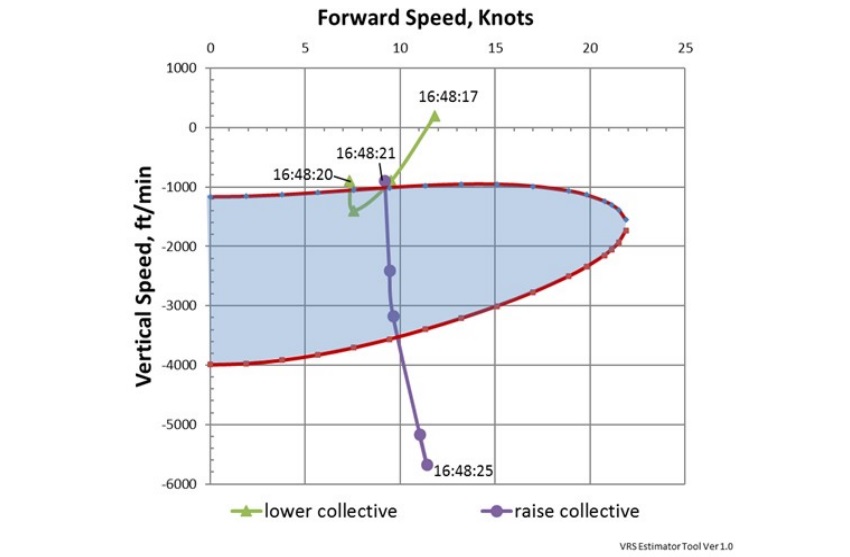 The blue shaded area represents combinations of forward speed and vertical speed when vortex ring state is predicted to develop.

The aircraft’s forward speed dropped below 20 kts at about 16:48:16, before the initial lowering of the collective (see below). 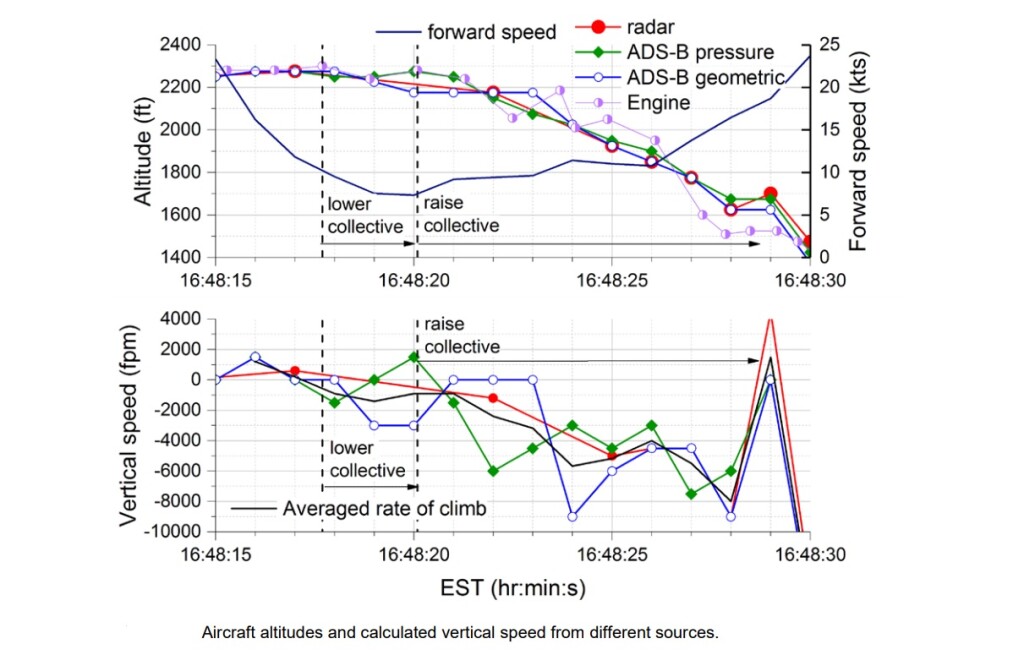 …even though power was applied, the helicopter was unable to reduce the descent rate, and it continued descending with an estimated vertical acceleration between 10.5 and 13.5 ft/s².

Anecdotal information indicated that the pilot had knowledge of vortex ring state, but review of the pilot’s training records indicated that he had not received any formal recurrent vortex ring state recognition and recovery training during his 16 years with the VSP aviation unit. Also, the VSP aviation unit training manual did not include vortex ring state recognition and recovery in any of the sample lesson plans for initial or recurrent training, and the associated maneuvers were considered to be optional.

Data from the FLIR system recorder could not be recovered.  The helicopter was neither equipped with, nor required by regulation to be equipped with, a crash-resistant Flight Data Recorder (FDR).  As common in many helicopter and smaller aeroplane accidents this hampered the investigation understanding why the accident occurred as this…

…precluded an evaluation of the pilot’s actions before the overtorque and the right yaw [and] precluded a determination of the pilot’s actions during the helicopter’s entry into vortex ring state, including any attempt to recover. Last, the available data were insufficient to determine if the right yaw began immediately before or after the helicopter’s encounter with the vortex ring state. This accident demonstrates the benefit of crash-resistant flight recorders aboard…aircraft that are not currently required to be so equipped.

Although the pedal restrictor control system (PRCS) cam was found in the engaged position, examination of the PRCS found no anomalies consistent with a system malfunction. Therefore, the PRCS cam could have activated during the vertical descent and have limited left pedal forward travel, particularly if the helicopter’s nose was lowered during the descent and the resulting airspeed was more than 55 knots (the airspeed at which left pedal travel would be restricted). Regardless, even if the PRCS were engaged, sufficient pedal travel would have been present to maintain heading in a hover out of ground effect.

The pilot’s loss of helicopter control after entry into vortex ring state, leading to a high rate of descent to the ground with a right spin.

Contributing to the accident was the pilot’s lack of recent and recurrent training in vortex ring state recognition and recovery.

Aerossurance library of safety resources include these articles: