During a patient transfer in Australia, an Emergency Medical Service Airbus Helicopters BK 117 dropped 4,000 ft after a loss of control in the cruise.  The recently issued Australian Transport Safety Bureau (ATSB) investigation report highlights the phenomena of retreating blade stall.

On 15 February 2013, BK117B2 VH-VSA, operated by Australian Helicopters, was conducting a trauma patient recovery flight from Port Pirie to Adelaide Hospitals in South Australia.  On board were the pilot, a crewman, two medical personnel and one patient.  On reaching the cruise altitude of 5,000 ft, light to moderate turbulence and a tailwind of about 15 kts were noted, while at a cruise speed of 115 kts (5 kts below the never exceed speed).  Shortly after, the helicopter suffered a violent, uncommand, nose-up pitch and rolled left before descending.  ATSB report:

The pilot instinctively applied full forward cyclic control, but using both hands given the severity of the pitch-up, in an attempt to regain control but was unable to arrest the continuing nose-up pitch. At about 70° nose-up the helicopter rolled left through approximately 120° and commenced a steep descent. On seeing the ground through the windscreen, the pilot applied full rearward cyclic, which resulted in the helicopter pulling out of its now near vertical nose-down attitude and levelling off at about 1,000 ft (about 800 ft above ground level).

No injuries were reported and the helicopter sustained minor damage the horizontal stabiliser end plates.  These were struck by the main rotor blades, which themselves were undamaged.  The ATSB found no mechanical or system faults that would explain the incident.

The helicopter was close to the maximum take-off weight and its centre of gravity close to the rear limit of the allowable envelope at the time of the occurrence. The helicopter’s cabin configuration and the number of people on board increased the zero fuel weight so that the maximum fuel load for the flight was limited to 390 kg. In consideration of the available fuel, the pilot selected an initial cruise altitude of 5,000 ft and remained below the cloud base in visual flight conditions. The selected cruise speed of 115 kt was close to the calculated never exceed speed (VNE) for the conditions of 120 kt. In combination, the high all-up weight and speed required greater collective pitch, or main rotor blade angle. This placed the blades closer to their stalling angle of attack. 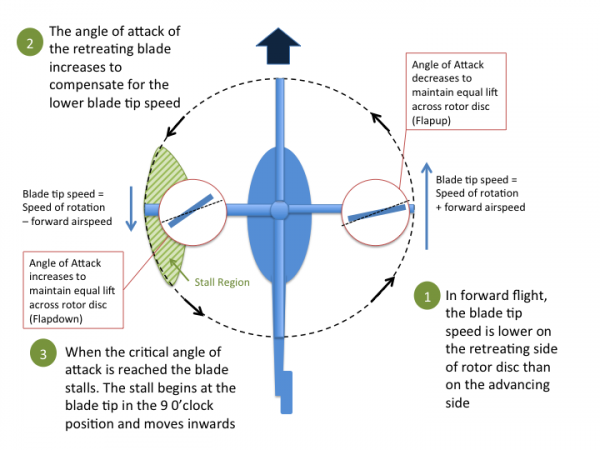 The pilot’s instinctive attempt to lower the nose with cyclic, rather than the correct action of lowering the collective to reduce the blade angles and therefore angle of attack, would have worsened the stall and delayed recovery. The subsequent ability to recover from the left roll and descent by applying rear cyclic, which also increases the angle of attack, indicated that the helicopter was no longer experiencing retreating blade stall. In the event, the recovery was facilitated by the available height and visual cues.

This incident highlights the importance of pilot awareness of the factors conducive to retreating blade stall, including high all-up weight, high density altitude, high airspeed, manoeuvres that increase flight loads and flight in turbulence. Similarly, the importance of initially reducing collective pitch to optimise recovery is emphasised as incorrect recovery actions can result in loss of control of the helicopter.

Aerossurance provides helicopter safety support to regulators, operators and their customers.  For aviation advice you can trust, contact us at: enquiries@aerossurance.com