On 4 September 2019, Airbus Helicopters AS350B3 D-HAUE operated in Portugal by Helibravo – Aviação for fire-fighting rolled over on take off at Pampilhosa da Serra.  One of the 6 persons on board received a minor injury. 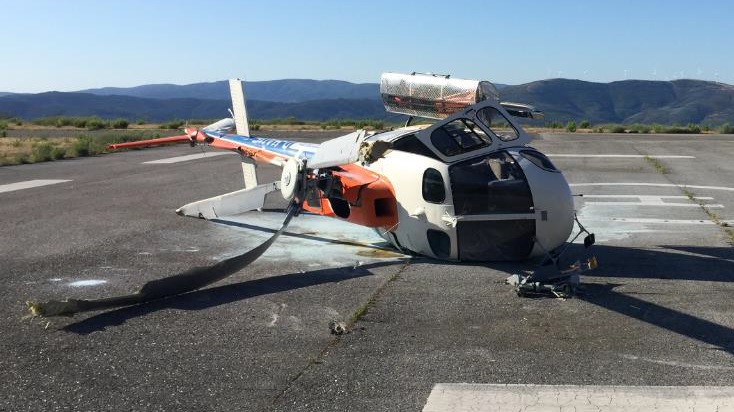 According to the pilot’s statements, the engine start-up and flight preparation procedures were normal with no relevant issues to record until the time the Flight Mode was selected, and a sudden increase in engine power was noticed. Immediately soon after, the aircraft begins a vertical movement with some oscillations.

The aircraft rotated 90º clockwise, rose from the ground to a height of about one meter and the pilot could not counteract the low tail attitude and the descent aircraft movement.

The aircraft touched hard on the back right of the skid and a tail rotor strike on the ground occurred.

The aircraft returned to the air and rotated around its longitudinal axis until the main rotor also touched the ground.

The aircraft fell on its right side, about 3 meters ahead of the initial contact point. 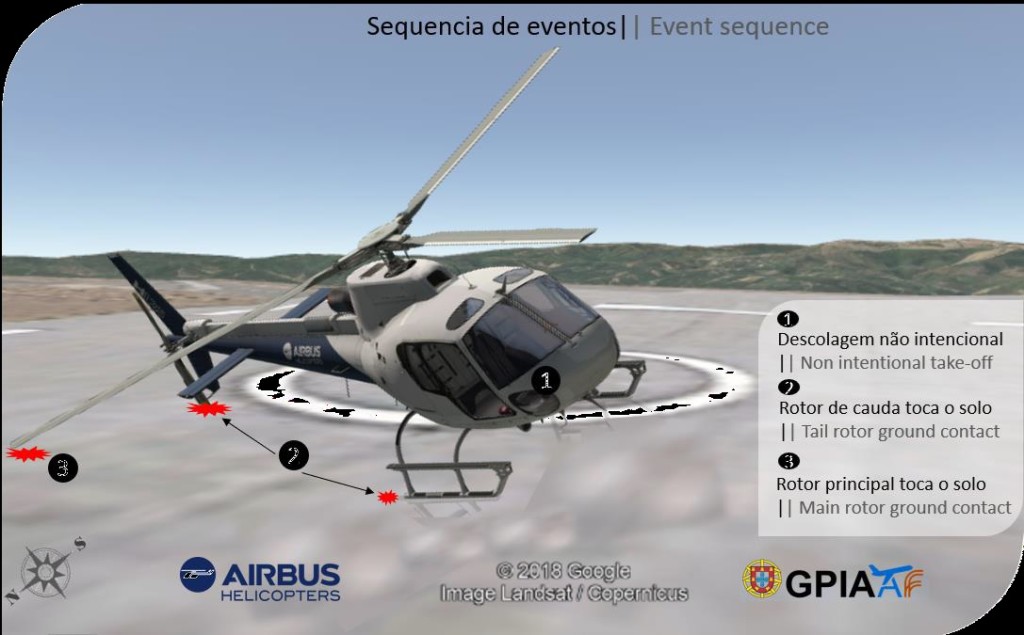 From the readings taken from the engine data (VEMD [(Vehicle and Engine Monitoring Display]), it was possible to confirm two main rotor rotational speed peaks above the 448 rpm that is the maximum value recorded by the unit. (note: certification limit for AS350B3 ([Arriel] 2B) main rotor rpm is 390 +4/-5 rpm)

The operator uses, mainly during the firefighting season, a mixed fleet of AS350 B3 helicopters equipped either with Arriel 2B and Arriel 2B1 engines (MOD 073254), that have different procedures for initiating the flight mode.

The crashed aircraft was equipped with an Arriel 2B engine (pre-mod 073254) in which engine control is performed via a Digital Engine Control Unit (DECU) with single channel governor and mechanical redundant system.

One of the main differences between aircraft versions (2B and 2B1), and relevant to the event, are the pre-engine start-up procedures and takeoff power selection for the FLIGHT mode.

The AS350B3 helicopter equipped with an Arriel 2B engine has a single-channel engine governor and DECU back-up MANUALLY controlled using the mechanical system of the twist grip. As stated on the flight manual section 4.1, the twist grip must be in the “FLIGHT” detent before carrying out the starting procedure. The flight mode selection is done using the three-position selector (OFF-IDLE-FLT/AR-RAL-VOL).

…the AS350B3 helicopter equipped with an Arriel 2B1 engine has a dual-channel engine governor and an automatic backup control (EBCAU [Engine Back-Up Control Ancillary Unit]); the simplified twist grip must be in the “IDLE” detent before carrying out the starting procedure (section 4.3 of flight manual). The flight mode selection is done using the two-position selector (OFF-ON) And then rotate the twist grip to the FLIGHT/VOL position.

On the accident aircraft with the older model (2B) the pilot needs to select the three position start-selector in the ceiling ([marked  on the illustration below] 1) to Off/Idle/Flight, to properly select idle for engine start, then select the flight position (FLT/VOL) to initiate the flight phase with no action on the collective twist grip (2), maintaining the flight (VOL) on the twist grip mode during normal operations. 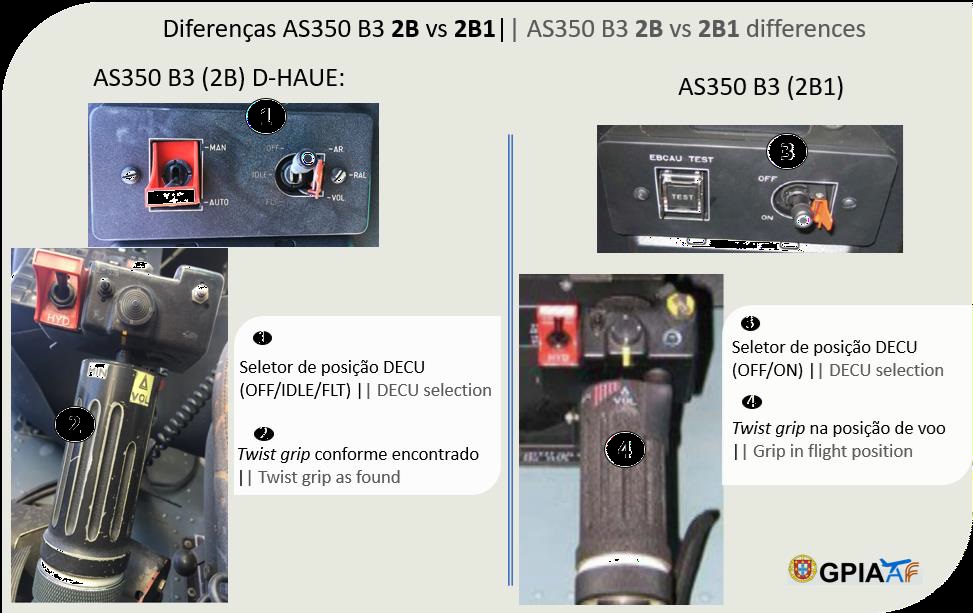 Differences Between Airbus AS350BN3 Controls for Safran Arriel 2B and 2B1 Engines (Credit: GPIAAF)

For the 2B1 model with dual channel control, a simple ON/OFF switch (3) (also in the ceiling) needs to be selected for engine start up to idle, and then select Gnd/Flight (VOL) with the grip (4) to FLT/VOL mode.

The aircraft was equipped with the mechanical stop (red pushbutton on the grip), however the modifications 073084 and 073222 were not incorporated (automatic release of the emergency range in case of governor failure). In this case the emergency range may have been inadvertently activated if the mechanic stop was not correctly engaged or accidentally disengaged.

Eurocopter Lettre-Service LS 1702-71-05 summarizes the various types of twist grip and their use on an actual failure or training for the AS350B3 helicopters equipped with Arriel 2B or Arriel 2B1 engines.

Eurocopter, in the Information Notice 2169-I-67, rev.0 from June 2010, recommended operator adopt applicable modifications to make the operation of the twist grip more reliable and to standardize the AS350 B3 helicopters with Arriel 2B engine.

Although the accident investigators don’t comment on it, as the helicopter was German registered it is highly likely to have been on charter for the fire-season.  This would make fleet standardisation harder unless that was an aircraft selection criteria.

The pilot rotated the twist grip, engaging the manual engine control mode and commanded the engine to MAX rpm leading the main rotor to reach 448 rpm and with sufficient generated lift, the aircraft started a “bounce”, even without a collective pilot input. It is likely that the collective control was not properly locked.

They say contributions were:

Noting this was a firefighting operation, additionally GPIAAF comment on human factors:

The readiness factor and focus on meeting contractual milestones in preparation and departure for the aerial mission, with a new team and environment for the pilot, may have contributed to diverting attention from the aircraft’s essential piloting actions.  …in pressure situations, where there is an excessive demand for cognitive resources, the human being reverts to an automatic mode of operation using the knowledge that is more prominent in his memory by experience that, in this case, led him to take an action based on the mental model of another aircraft configuration.

Helibravo, Aviação Lda, implemented at all operational bases a specific procedure to make sure that the ground staff, when assisting the aircraft, always maintain visual contact with the pilot, until both (pilot and ground staff) signalising the ready to flight (thumbs-up). The ground staff will always keep the aircraft in sight until it leaves the manoeuvring area.

The specific relevance of this action to the accident is not articulated.

No PT.SIA 2019-008: Helibravo, Aviação Lda, should ensure that all pilots are properly trained and knowledgeable about the equipment they operate, their differences and particularities, especially on the fleet reinforcement status aircraft. The operator should also take the necessary actions to standardize its AS350B3 fleet.