On 31 May 2020, Airbus Helicopters AS350B3 D-HAUO, operated in Portugal by Helibravo – Aviação (leased from Meravo), crashed shortly after uplifting water during a fire-fighting training flight.  One of the two occupants received minor injuries and the other was unharmed.  Investigators uncovered a latent maintenance error that had inexplicably remained undetected for 16 years, despite numerous opportunities to detect it. 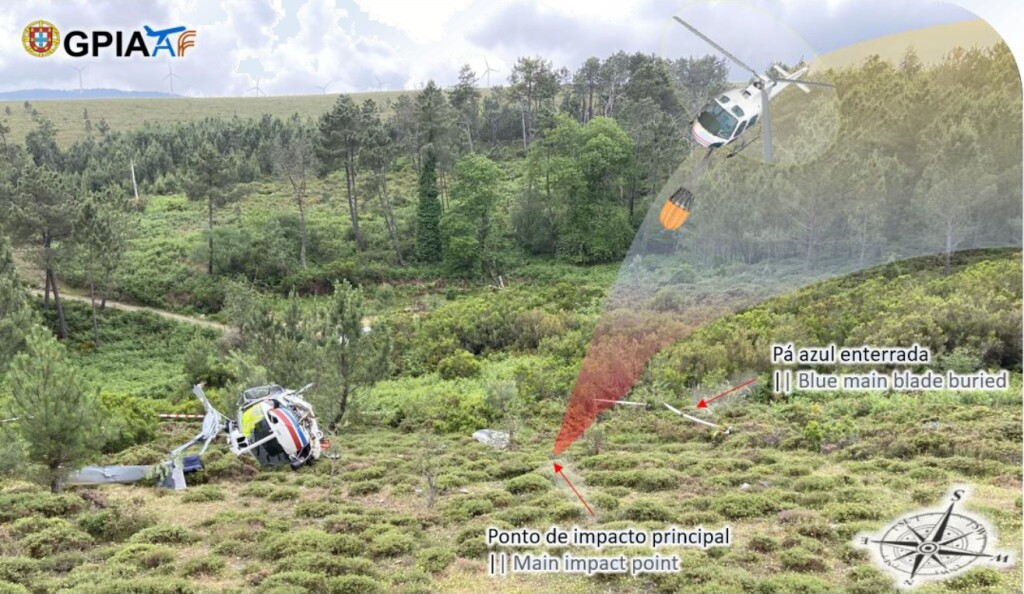 The Portuguese accident investigation agency, GPIAAF, say in their safety investigation report (issued on 23 December 2020) that the training session was the day before the local fire season commenced.  The aircraft had recently arrived from Germany (where base maintenance was conducted).  Dual controls were temporarily fitted for the instructor seated in the left-hand seat.

The removable flight controls allows full aircraft control on its three axis and the engine control as well, however it is not equipped with additional control systems for bucket opening or releasing, hydraulic system cut-off or other specific mission functions, designed only to be controlled by the pilot sitting on the right.

The standardisation training was to include several water collections and releases in a mountain training area that the instructor had used twice before that day.  This was the first flight together of these two pilots.  They only had headsets “as the intercom system of their helmets was not compatible with the aircraft” (for reasons that are not elaborated).

The instructor pilot and the pilot had, respectively, a total of 2992 and 2984 hours of flight experience, of which 1451 and 1701 were performed on the type.

After 4 successful drops the instructor “decided to take over the aircraft’s controls and demonstrate to the pilot the water scooping and take-off procedure”.

With the Bambi Bucket filled with water, while starting the transition flight (from hover), the helicopter initiated a leftward rotation and the instructor pilot tried unsuccessfully to counteract immediately applying RH pedal to maintain the heading. The instructor pilot mentioned that he needed to apply unusual force in the controls and there was no appropriate response from the helicopter.

After having made a circular descent of approximately 360º, the bucket was dragged through the vegetation, forcing the helicopter into a deeper nose down attitude and crashed. 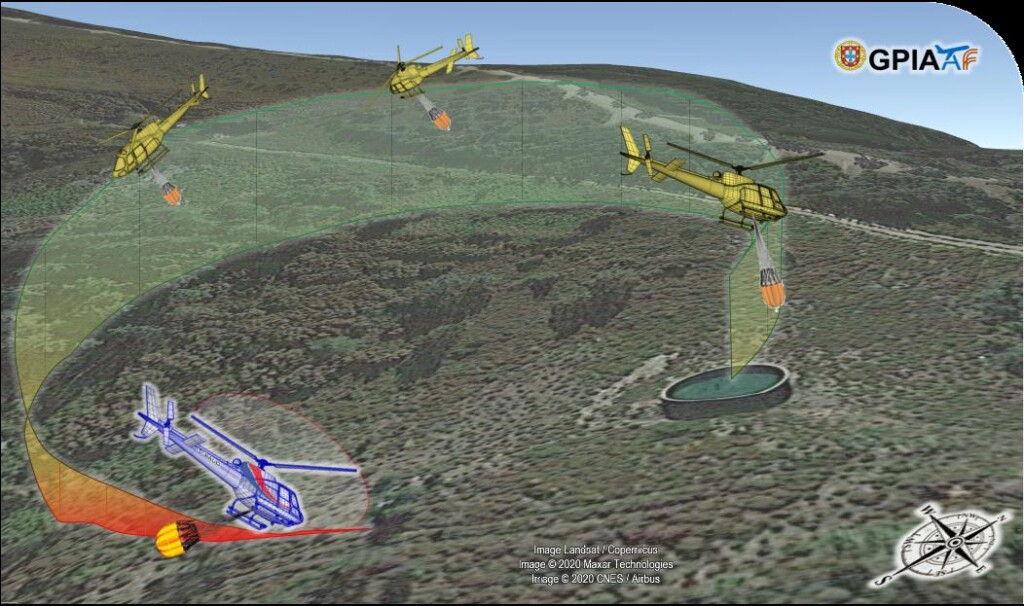 The underslung bucket was not jettisoned by the right-hand pilot before impact.

The helicopter was destroyed by the ground impact that occurred with a significant nose down attitude and on its left side, breaking the front skid cross support, deforming the lower cabin area and cockpit top, injuring the instructor pilot in the head.  The main rotor blades were destroyed when touching the ground with high energy…

The helicopter came to rest on its side and both crew egressed successfully.

The flight control [is] assisted by a hydraulic system using an engine-driven pump using a flexible drive belt from the engine-to-main rotor gearbox power drive shaf…and three main and one tail rotor hydraulic servo actuators with associated electrically operated warning and emergency systems.  Hydraulic accumulators are fitted on each of the three main rotor servo actuators.

There is a load compensator accumulator on the tail rotor hydraulic actuator. 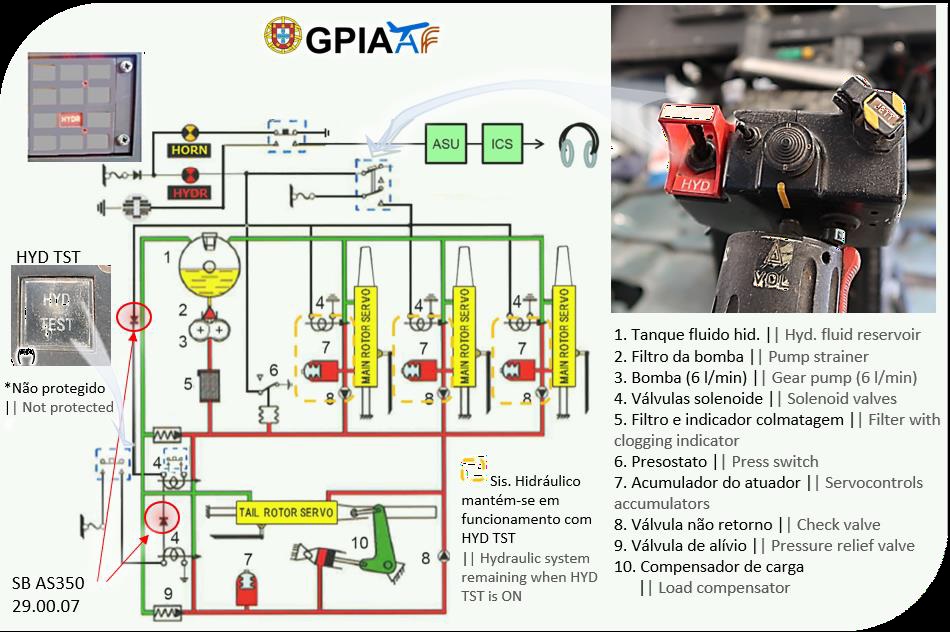 Eurocopter [as Airbus Helicopters was then known] issued the SB 29.00.07 (dated April 08th 2004) that improved the functionality of the “HYD” cut-off switch. The SB was mandated by the French Aviation Authority (DGAC) in June 2004 with AD F-2004-089. The intent of the SB/AD action was to “… eliminate the possibility of a load imbalance of the flight controls due to residual pressure in the system after cutting off the hydraulic assistance.” This was achieved by modifying the existing electrical circuit to permit the simultaneous opening of the four electro-valves for the three main rotor servos and the regulating unit.

The system is designed in such a way that when the “HYD” cut-off switch on the collective pitch grip is set to on, the main servo-controls solenoid and the regulator solenoid are energized allowing the hydraulic pressure immediately drops in the hydraulic circuit. The solenoid valve of the load compensator is not energized, the hydraulic pressure remains inside the load compensator system. The “HYDR” red light is set to on with the pressure drop and the servo-controls operate in “mechanical”.

The investigators checked the pressure in the servo-controls accumulators, expecting a nominal 15 bar and found:

During the extensive system testing, it was found that the operation of the…“HYD” cut-off switch activation, resulted in the yaw load compensator solenoid valve energisation [too], which was not expected by design (loss of the complete hydraulic assistance on the yaw control).

No anomaly was found with the “HYD” cut-off switch itself.

The related wiring configuration was checked and a discrepancy was detected on “23DELTA-1” connector misconfigured on wires DH2F and DH50E connected to “10D” connector resulting the rear servo valve being energized in both conditions, with HYD TEST pressed and “HYD” cut-off switch activation.  The wire misconfiguration was traced and found to be related with the diode’s installation as per SB AS350 29.00.07. 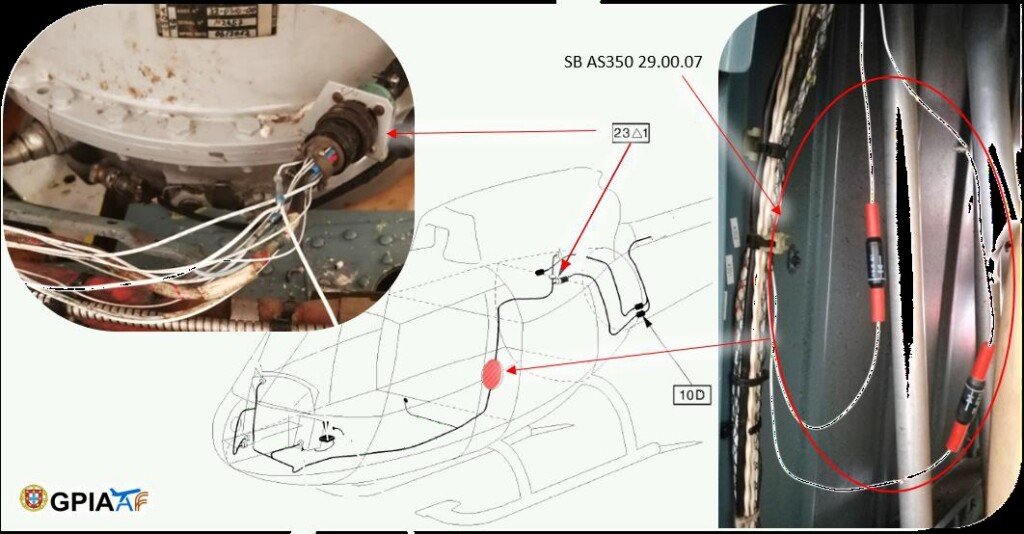 The non-compliance in the SB 29.00.07 application with “23DELTA-1” connector found in pre-mod configuration with the wires DH2F and DH50E still connected to “10D” connector, explains why the “HYD” cut-off didn’t behave as expected.

The SB 29.00.07 requires functional tests to be performed after its application to verify proper system operation.

Additionally, the maintenance program of the AS350B3 requests that every 2 years or 600FH a test to the load compensator operation (AMM 67-34-00,5-1) and integrity of the system (AMM 67-34-00,6-1) is performed. These maintenance tasks are designed to check and detect possible issues with the operation of the “HYD” cut-off switch.

…SB 29.00.07 was accomplished by the owner’s maintenance service provider, and responsible for the aircraft’s airworthiness on 06-DEC-2004. Since then, the helicopter underwent several maintenance activities that should have detected the 16 years old misconfiguration modification.  The latest records exhibited the following:

The last phase of the emergency procedure or training requires the “HYD” cut-off switch activation to depressurize the three servo-control accumulators to avoid any asymmetrical loads in flight. With the wiring misconfiguration on the accidented aircraft, the “HYD” switch activation will also depressurize the yaw load compensator, an important item to control the tail rotor during the running landing.

Airbus Helicopters performed the calculation of the load to be applied on the pedal to maintain the stationary/hover in case of the complete loss of the tail rotor hydraulic assistance. The data used for the calculations were: assumed mass: 2400 kg, OAT: 22°C, altitude: 850 m, no wind and out of ground effect.

In these conditions the pedal position should be 75% (0% is full left pedal and 100% is full right pedal) without the assistance of the tail rotor servo-control and the yaw load compensator, the pilot “effort” load to be applied on the right pedal to maintain the heading in stationary is about 58 daN.  Note: With the yaw load compensator working properly and charged with only 5 bar of nitrogen (recorded pressure), the load was estimated at 7 daN. The near 60 kgf represent eight times the value that the pilot would expect. 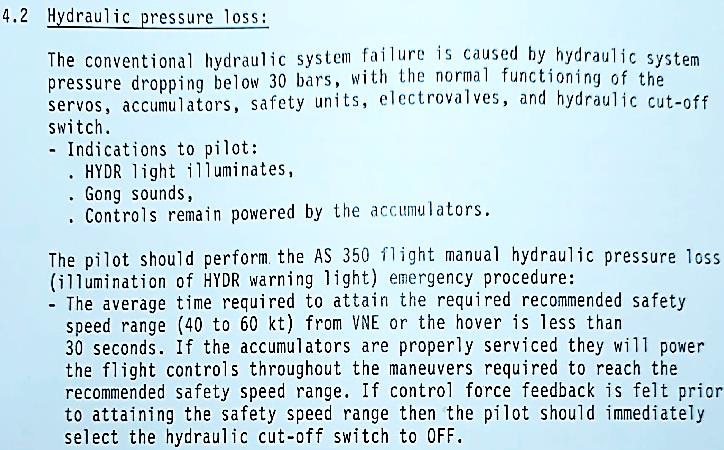 GPIAAF say that their investigation points to the inability of the pilots to effectively control the helicopter without hydraulic system assistance as a most probable cause for the loss of control in flight, with the following potential contributory factors:

The operator and owner of the helicopter both conducted fleet checks without further findings.

The operator, following the event internal assessment, developed a set of actions and improvement in its training procedures with emphasis on training mission’s communication and preparation, trying to strengthen its CRM, both in training and in single pilot operations.

Not directly related to the accident causes, it was found that the hydraulic test (HYD TEST) switch is vulnerable to inadvertent operation.

Service Bulletin (SB 67.00.32) recommending installing the modification 073304 introducing a protective guard device over the HYD TEST switch to prevent inadvertent operation. Without the cover, the risk of unintentional use is always present.

GPIAFF Lessons Learnt from this Accident