The Swedish Accident Investigation Authority (SHK) has issued their report (in Swedish but with an English summary) on a serious incident that occurred when a party of special force troops were being deployed on a trial underslung beneath Sikorsky UH-60M Black Hawk (known in Sweden as Helicopter 16), 16238. 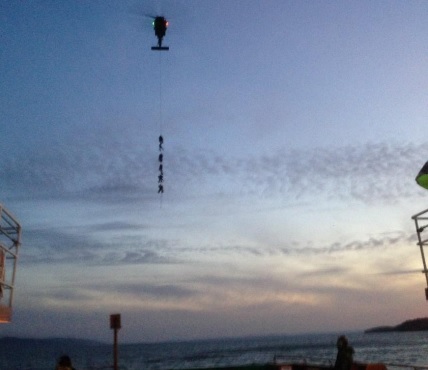 On 15 October 2015 the Swedish Armed Forces were conducting an Operational Evaluation (OPEVAL) trial of a new capability, called SPIE (Special Patrol Insertion and Extraction), to deliver a party of 11 troops by a 40m longline under a helicopter to the local ro-ro ferry Christina Brahe in Lake Vättern. 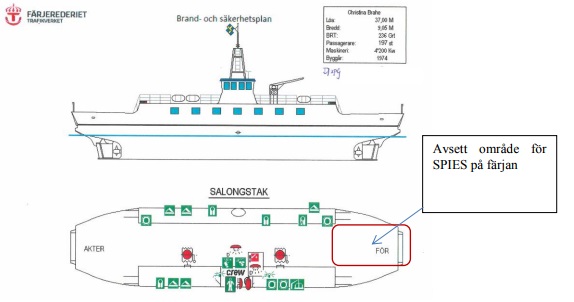 The helicopter lost station momentarily and:

The rope became caught in the vessel temporarily and the people on the rope were dragged towards the vessel’s gunwale, resulting in minor injuries. 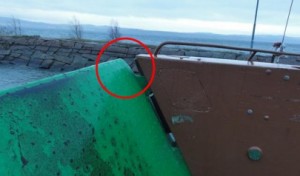 The Rope Snagged on the Ferry’s Vehicle Ramp (credit: SHK)

The SHK say they were…

…able to establish that there have been major shortcomings in both the production of the OPEVAL plan for SPIE and the implementation of OPEVAL SPIE.

These shortcomings can primarily be traced back to limitations in terms of knowledge and relevant experience of similar mission profiles involving vessels.

These shortcomings have been present throughout the chain of command, from the crew up to those with decision-making responsibility for the implementation.

The lack of such expertise has resulted in no one at any level having understood what risks have been taken and the commander and his crew not having been given the requisite support in advance of and during the implementation of the operation.

Splitting up the planning and implementation of OPEVAL SPIE between the Air Combat Training School’s Tactical Development Training Unit Helicopter (LSS UTV LUFT TU HKP) and the 23rd division of the Helicopter Wing has resulted in the areas of responsibility becoming unclear, which risks leading to essential actions not being taken.

The SHK note that SPIE lacked an airworthiness approval so they concluded its use “was therefore not permitted”.  They note…

…there was a difference of opinion between the Swedish Defence Materiel Administration (FMV) and the Armed Forces concerning which requirements applied and how these were to be interpreted. This resulted in the Armed Forces believing it had more opportunities than before to approve new material for use in a simpler manner.

They go on to say there were strong time pressures “as a result of a desire to develop new capabilities quickly”.

Combined with the limited knowledge and experience of similar mission profiles involving vessels, this resulted in the work not taking place in a sufficiently structured and safe manner, which in turn led to risks not being identified and managed in an appropriate manner. A “can-do culture” exists.

At the time of the occurrence, there was a lack of sufficient oversight from senior Flight Operations officers with respect to Flight Operations within the 23rd division. Without such oversight, operations cannot be led and controlled safely and in accordance with the Armed Forces’ regulations.

The SHK note that the Supreme Commander’s 2010 direction to create a safety management system (SMS), based on international civilian standards, has not been implemented.  they say:

Parts of an SMS are described in the governance documents, but not in full and there are shortcomings in the application of those parts that do exist.

The SHK conclued that this incident was caused by “shortcomings in terms of the prerequisites necessary in order to implement OPEVAL SPIE in a safe manner”.  Namely:

Contributory factors have been weaknesses in the safety culture within the helicopter operations investigated and a lack of oversight in operations within the 23rd division from senior Flight Operations officers.

Underlying factors, in terms of how this has been able to arise, have been the lack of an implemented and functional SMS in the Armed Forces’ Air Operator.

To the Swedish Armed Forces:

To the Flight Safety Inspector:

UPDATE 26 November 2017: Swedish NH90 CFIT: Pilot Experience and Skating on Frozen Lake A Swedish NH90 crew with low experience on type had a lucky escape when they inadvertently descended and struck a frozen lake during an exercise in Norway.

UPDATE 21 November 2018: A 360-degree video from the US Army’s 25th Combat Aviation Brigade, shows a UH-60 Black Hawk helicopter  snatching a team of soldiers with the 25th Infantry Division out of the water during  SPIE training.