The Swedish Accident Investigation Authority (SHK) has issued their report (in Swedish but with an English summary) on a serious incident at Lake Gilten, south of Namsos, Norway on 27 February 2016. 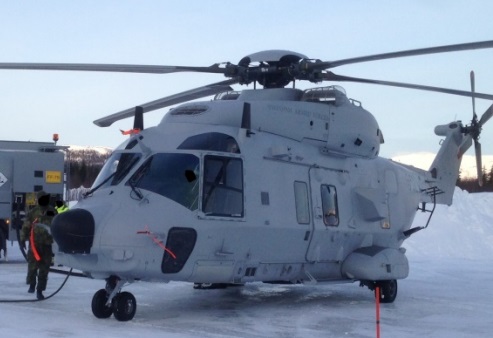 A Swedish Air Force NH90 helicopter (designated HKP14D), serial number 1080 (052), came in contact with the ground when low flying, during the preparations for an international exercise in Norway.

The helicopter was number two in a two-ship formation consisting of two NH90s. They had transported Swedish soldiers from Vaernes (Trondheim) to an exercise location and were headed back toward their temporary base at Namsskogan.

The impact left a 20 m long, 50 cm deep track in the snow and ice on the frozen lake, without injury or serious damage to the helicopter. 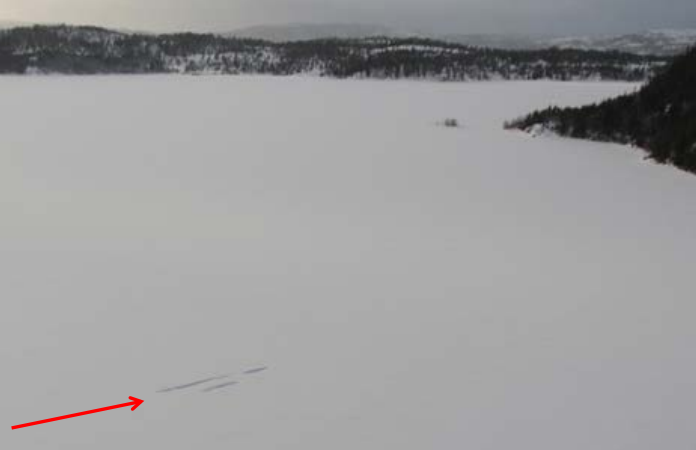 The location of the NH90 CFIT incident with the tracks in the snow. The arrow shows the direction of flight. The picture also gives an idea up on the prevailing ground conditions and the opportunities to be able to land near the place where the incident occurred (Credit: Swedish Armed Forces via SHK)

…visibility was estimated about 800-1,000 meters.  The crews followed the sloping terrain down to the lake. At the same time they reduced the height and the speed was reduced. The lake was snowy which one caused few external references, which in turn made it difficult distance estimate in relation to the snow surface. Distance to others side of the lake was about 500 meters. The view was sufficiently sufficient for the crews to see the forest there. 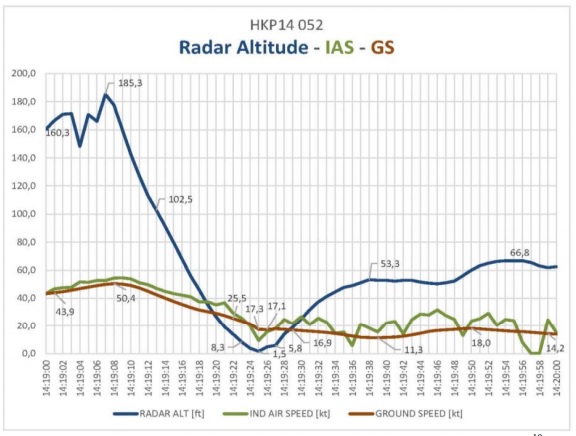 Approaching lake high rate of descent developed say the SHK, from an initial altitude of around 730ft. Radar altitude reduced from 185 feet to 0 feet in 18 seconds while airspeed fell from 48 to 17 knots.  The crew were not monitoring radar altitude.

The radalt was bugged to warn at just 30 ft and was also subject to a delay before activation.  One audio warning came in the form of a two-tone signal two seconds before ground contact. 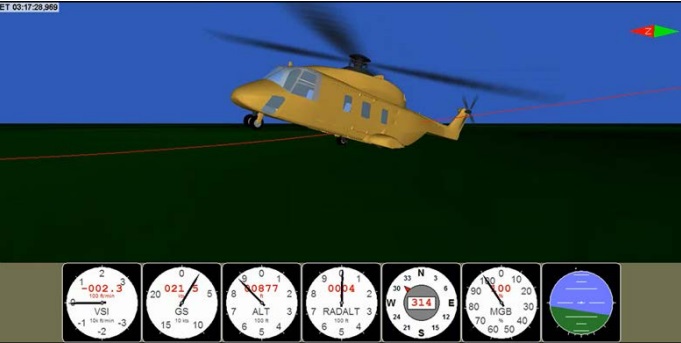 Image from an animation of FDR data. The figure illustrates the position of the helicopter  immediately prior to the moment of ground collision with instruments showing from left to right: sink rate, ground speed, barometric altitude, radar altitude, course, main rotor speed and attitude indication. (Credit: Airbus Helicopters via SHK)

The SHK comment that the crew “could not fly to the extent that they would have needed and also had planned to do before the exercise” their time on type was low and they had not “fully educated themselves on the current helicopter type”. The Commander had 347 hours on type but just 15 in the last 90 days.  The co-pilot had just 93 hours on type, 17 in the last 90 days.

The SHK opine that:

They base this view on the following references:

The low experience levels were identified by a prior risk assessment:

The analysis apprehended a number of risks and contained several measures and limitations to mitigate the risks. However, the measures decided were not fully taken. Furthermore, according to SHK, the measures would only have been sufficient to reduce the risks to an acceptable level, if the crews [were suitably experienced on type]. Though, it is possible that the incident could have been avoided if the measures had been taken according to the plan.

The fact that no one reacted upon this within the organization and more actively followed up the preparation and education status of the participating helicopter unit in relation to the demanding environment they were expected to perform in, indicates that there are deficiencies in the routines regarding monitoring and follow-up of the operations with HKP 14 at the central level.

The SHK also opined that crews “should possess instrument flying skills” and that in relation to automation, the upper modes in the AFCS “should be determined [sic] before use”.

The SHK also note as an aside that four different terms for radar altimeter output can be found in the aircraft’s manuals: radar height, radio height, radar altitude and the radio altitude.

According to SHK the incident was caused by:

…a too high ambition level for the mission in relation to the crew’s level of education, helicopter type experience and flight time.

The Armed Forces were recommended to:

UPDATE 13 February 2019:  Responses to the safety recommendations are published.