On 2 November 2018 private Bell 206B3 N417WT crashed in a Controlled Flight Into Terrain (CFIT) at night just c100 ft below the top of a 1,500-ft hill in the Chalk Bluff Resort and Park, c5 miles east of their departure point at a private ranch, NW of Uvalde, Texas.  The pilot and two passengers, who were leaving their wedding reception for their honeymoon, all died. 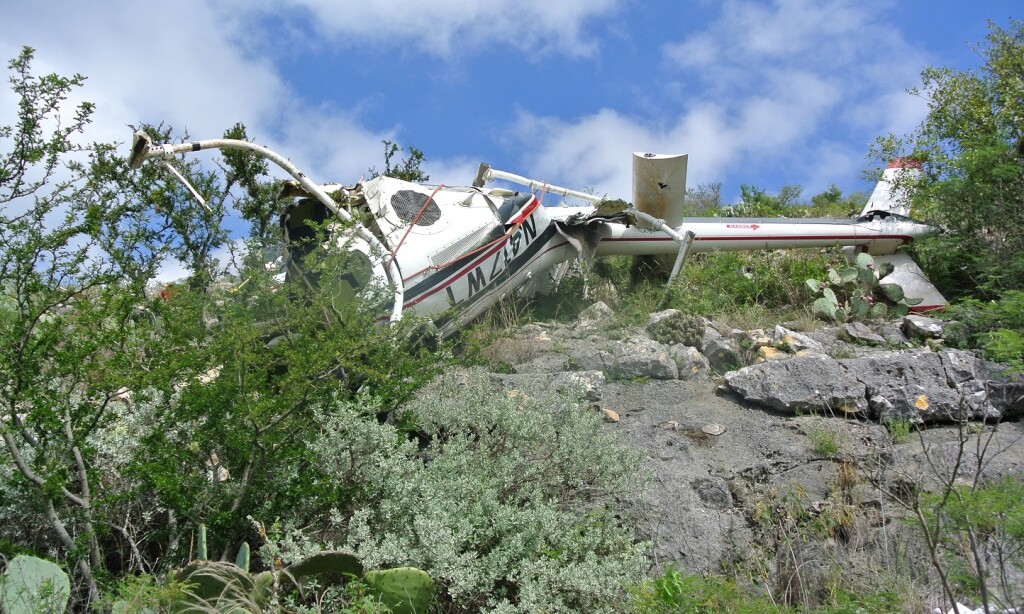 The US National Transportation Safety Board (NTSB) explain in their safety investigation report (issued in June 2020) that the aircraft had departed the ranch 6 mins earlier at 23:41 en route for San Antonio, Texas on a Part 91 ‘personal flight’.  The pilot was apparently a family friend and the helicopter was owned by a company that was, in turn, owned by family members. So called night visual meteorological conditions prevailed.  However, the moon was below the horizon and the remote rural area would also have had very little cultural lighting on the ground.

The pilot was 76, held a Class 2 Medical with certain unspecified waivers/limitations (last examination: 26 March 2018) and had a total of 23,400 flying hours, 400 on type (estimated).  It is stated he was Instrument Rated (“Airplane & Helicopter”) and Instructor Rated (“Helicopter & Instrument Helicopter”) though there is no detail on any instrument or night recency.

A review of data from the helicopter’s [Chelton] primary and multifunction display units revealed that…the helicopter reached an altitude of 1,900 ft before beginning a gradual descent, until the final barometric altitude of 1,538 ft (indicated altitude on the display) and 74 knots airspeed. The altimeter was set for a barometric pressure of 30.05 inHg. The data did not reveal any extreme changes in pitch, bank, or airspeed. The flight display also retained the last GPS altitude, which was 1,422 ft. 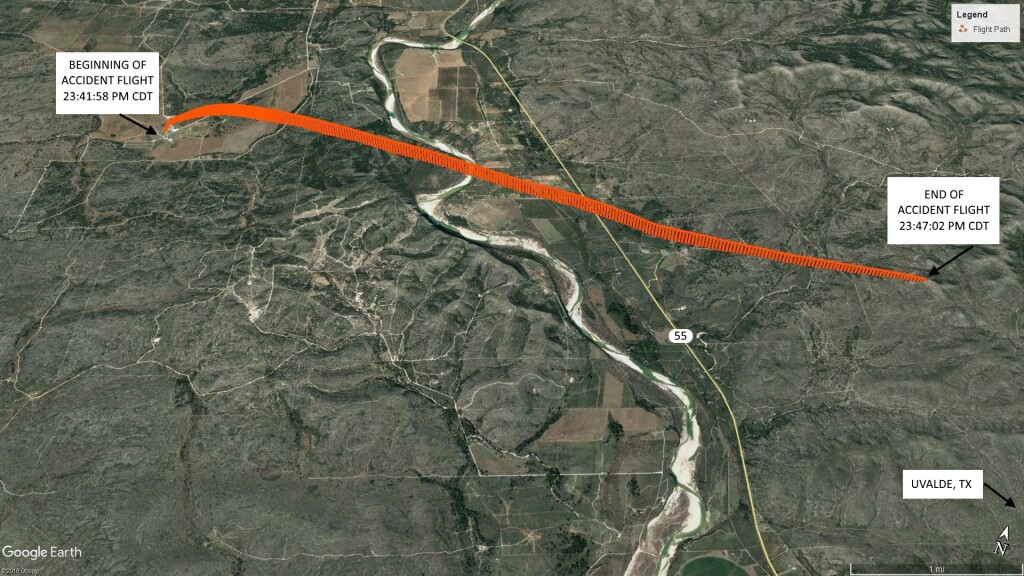 Additionally, the terrain awareness warning system (TAWS) and helicopter TAWS low altitude alerts were set for 140 ft above ground level; however, terrain alerts were set to “inhibit”…therefore, the pilot would not have received a terrain warning message. Flight information from the displays did not record any evasive maneuvering, and it is likely that the pilot did not see the terrain before impact…about 71 miles west of San Antonio International Airport. 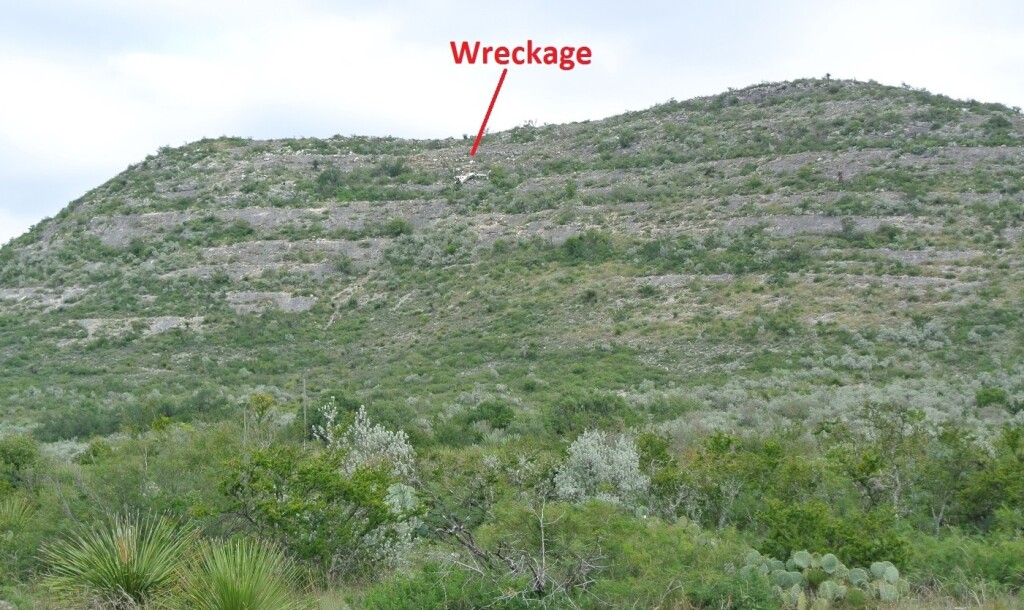 A wreckage path about 75 to 100 yards long was distributed along the hillside leading to the main wreckage. There was no post-crash fire. A search…found the wreckage about daybreak the following morning. 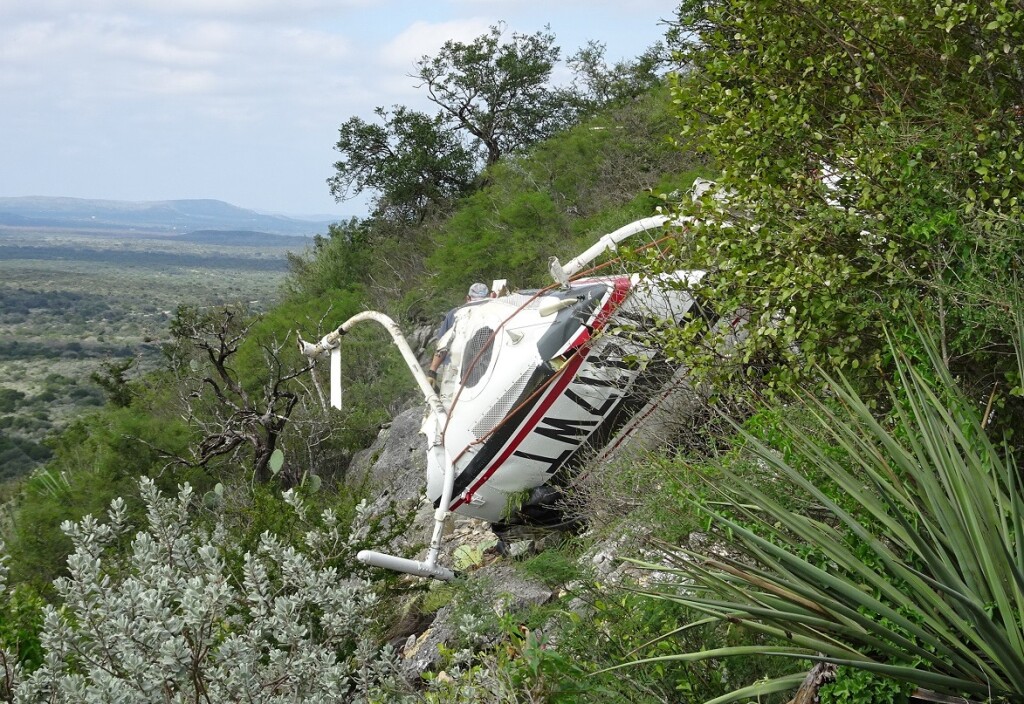 No pre-impact aircraft abnormalities were identified by NTSB when the wreckage was examined.  Autopsy and toxicology testing did not reveal evidence of pilot incapacitation and there were no traces of alcohol.  Based upon the helicopter’s routing the NTSB considered it unlikely that the helicopter encountered reduced visibility or ceilings. The NTSB do note that:

A review of the pilot’s medical information indicated that he had been diagnosed with early cataracts; the pilot first reported cataracts to the FAA in 2005, and it is possible that they could have increased in severity enough to have compromised his night vision and contributed to his difficulty avoiding the hill.

Video evidence from witnesses who observed the departure showed that bright flood lights were shown [sic – we assume ‘shone’] directly at the helicopter during the departure. 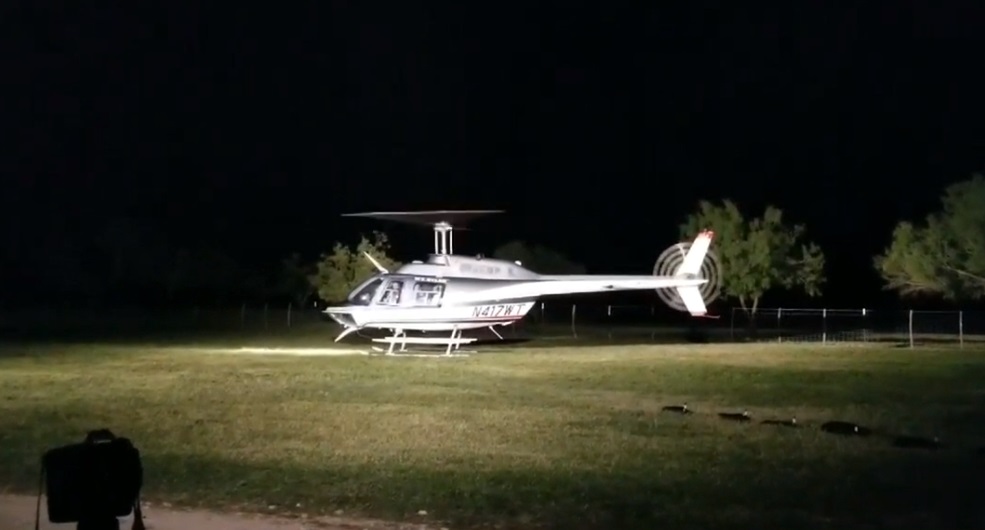 Bell 206B3 N417WT Illuminated Prior to Departure (Credit: Jason Martinez via NTSB)

[T]he pilot’s eyesight may not have adjusted to the night conditions after being exposed to [the] bright lights during departure.

However, the severity of his cataracts at the time of the accident is unknown, and whether visual limitations from cataracts or bright lights contributed to the accident, could not be determined.

We consider that further below.

…was the pilot improper decision to inhibit the helicopter’s terrain warning systems and flight at low altitude.

Our Observations: The Hazard of Night VFR Flights and the Difficulty for Eyes Adapting to Dark Conditions

The decision to conduct a flight single pilot on a dark night with no moon and few ground lights for reference increased the risk substantially.  The Australian Transport Safety Bureau (ATSB) has previously noted that:

Although there is no effective difference between IMC and VMC on a dark night in areas with no ground lighting, there was a substantial difference in the minimum requirements for IFR operations compared to night VFR operations.  The ATSB has been concerned about the safety of VFR flights in dark night conditions for many years…

…strongly supports such guidance, and also advises all operators and pilots considering night flights under the VFR to systematically assess the potential for the flight to encounter dark night conditions by considering weather conditions, celestial illumination and available terrain lighting. If there is a likelihood of dark night conditions, the flight should be conducted as an IFR operation, or conducted by a pilot who has an IFR-equivalent level of instrument flying proficiency and with an aircraft that is equipped to a similar standard to that required by the IFR.

It is certainly a consideration in the EHEST Safety Leaflet HE13 Weather Threat For VMC Flights. The difficulty adapting to the low light conditions is also not to be underestimated.  As explained by Dr Christopher Baird of West Texas A&M University:

There are several factors that contribute to our eyes adapting to darkness. As described in the textbook Optometry: Science Techniques and Clinical Management, edited by Mark Rosenfield and Nicola Logan, the three main players in dark adaptation are the pupil, the cone cells, and the rod cells. The pupil…lets the light into your eye so that the light can form an image on the back (the retina). When confronted with low light conditions, the iris expands the pupil as wide as possible. This dilation lets as much light as possible into the eye so that sensitivity is enhanced. The pupil’s contribution to dark adaptation takes only a few seconds to a minute to be completed. The cones cells along the retina are responsible for color vision [but] can adapt to partial darkness. Cone cells contain rhodopsin, which is…very sensitive to light and is the primary chemical used by the cones when seeing in low light conditions. The problem is that rhodopsin is so sensitive to light that under normal light levels…the rhodopsin in our eyes is deactivated. Upon exposure to darkness, the rhodopsin is able to regenerate and reactivate…improving our night vision. But this regeneration process takes…about 10 minutes… Lastly, the rod cells in our eyes are responsible for black and white vision. They are the heavy-hitters when it comes to vision in low light conditions.  Cone cells take several hours to become completely dark adapted.

In summary, upon exposure to darkness, our pupils dilate in a matter of seconds, our cones adapt in 10 minutes, and our rods adapt completely after several hours.

…as we grow older two things happen to the lens: it clouds up and it becomes less pliable. The clouding of the lens–or cataract–forces an image to travel through a distorted medium, resulting in diminished vision. Similarly, when the lens loses its pliability it also loses its ability to focus over a wide range of distances. A hardened lens becomes more fixed on distant objects and cannot focus as well on nearby objects or vice versa.

This all suggests the pilot’s eyes would have been poorly adapted to very low light conditions. In addition:

The DGAC in France has published a guide (in French) to night VFR helicopter operations. From Aerossurance: