On 11 March 2019 Airbus Helicopters AS350B3 HB-ZCZ of Air-Glaciers struck a with a power line near the Tseuzier dam in Crans-Montana near Sion, Switzerland.  The helicopter survived the wire strike with only damage to the leading edge of one main rotor blade.

The Swiss Safety Investigation Board (SUST) explain in their safety investigation report, issued in French on 21 January 2021, that the helicopter was conveying three workers to a dam, to conduct a monthly inspection.  The helicopter was equipped with a cable cutter / Wire Strike Protection System (WSPS) as well as a FLARM, a glider/GA traffic warning system that also warns of obstacles programmed in its database.

The pilot said he landed at the Tseuzier dam about 50 times in total, once in the past 90 days.

Air-Glaciers Airbus AS350B3 HB-ZCZ Wire Strike: Tseuzier Dam in a NW direction with the two pylons on the left and right side (red circles); the route of the power line is not marked and therefore almost invisible to the naked eye (Credit: Via SUST)

Without performing a reconnaissance flight prior to the approach, the pilot intended to fly over the power line he was aware of, then perform the final approach along the dam wall.

SUST note that obstacles over 25 m are required to be notified and are available via the obstacle collection system and a Web-GIS Obstacle Map (WeGOM) is updated twice per week.  At the time the cable was in the database, but its position was offset by 20-50 metres as show below (since corrected but not a factor in this wire strike). 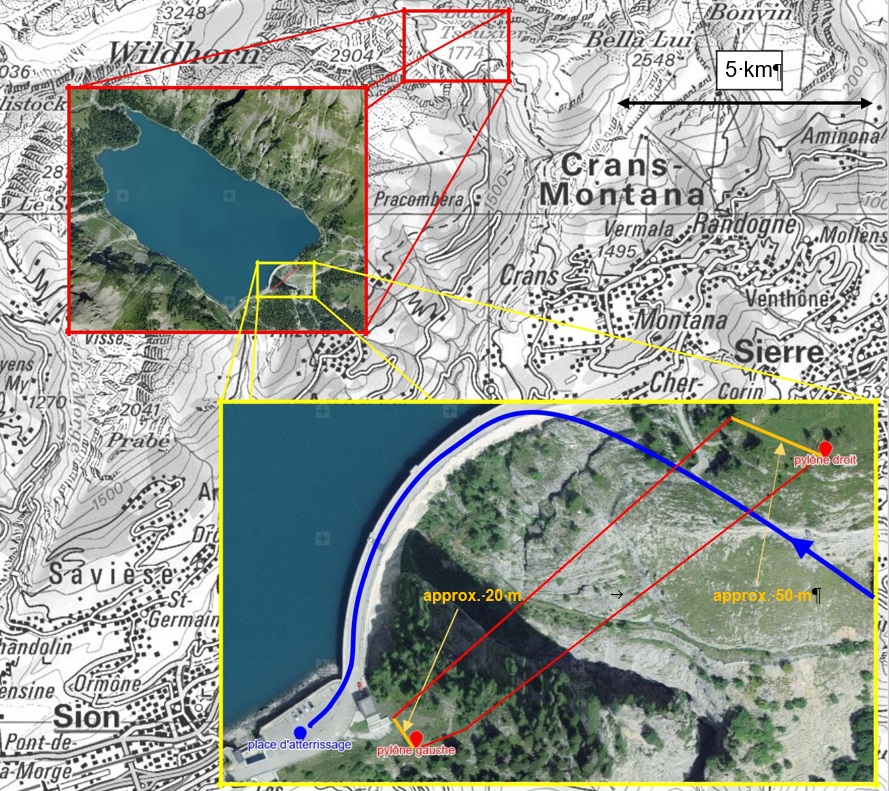 Air-Glaciers Airbus AS350B3 HB-ZCZ Wire Strike: The approximate course of the helicopter in the final approach phase from the SE side (dotted blue line) shown on the Web-GIS online obstacle chart (WeGOM) database. The route of the power line shown in the database (lower red line) with a length of 227 m to the south of the dam is offset by approximately 20 respectively 50 meters from the actual routing  (upper red line) (Source: Federal Office for Topography via SUST)

The [operator’s] Operations Manual (OM) A, states that …“A direct approach is permissible provided that the surroundings are reasonably clear and or familiar and that the airspeed is adjusted to a slow enough ground speed.” According to the pilot’s statement, these conditions were met.

As the pilot later stated, he was familiar with the line, but he estimated its position a little further north [consitent with the obstacle database] and at a lower altitude in the valley.

The FLARM obstacle alert was not integrated into the intercom system and headset audio, so was not heard by the pilot, although it was audible in the cabin.  During the approach the wire strike occurred.

The pilot did not notice any vibration or engine parameters being exceeded; he continued his approach and landed the helicopter without problem on the planned landing zone. As the weather conditions deteriorated, the pilot does not stop the machine completely but only idled the engine.

After a 5-minute flight back to base, damage to the leading edge of a main rotor blade was observed. No other part of the helicopter was hit. 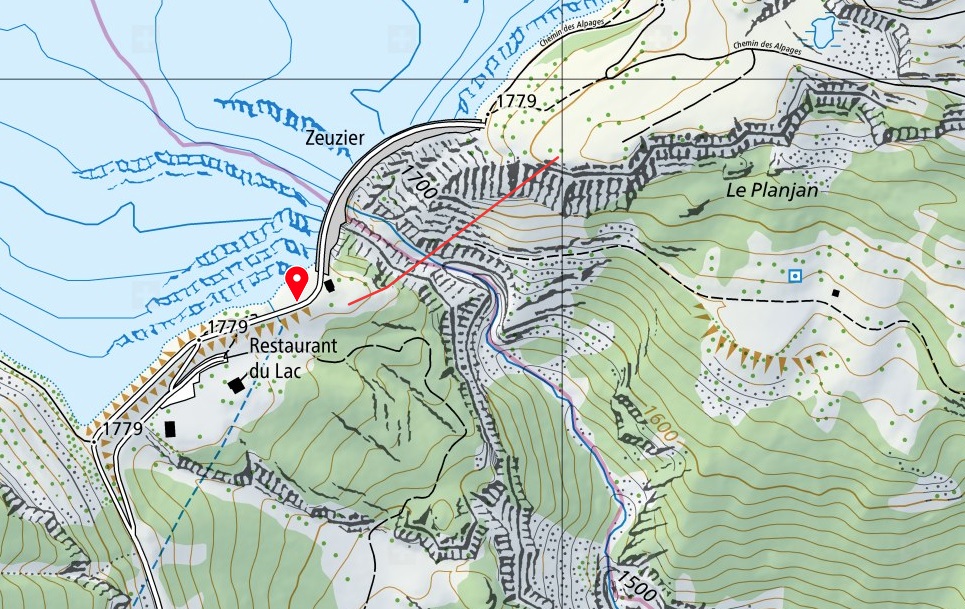 The investigators concluded the pilot was familiar with the area.

Although the OM A’s straight-in approach requirements were probably met, the pilot deprived himself of the ability to visually determine the exact position and height of the obstacle using a preliminary reconnaissance flight.

Assuming he was familiar with the position and height of the obstacle, the pilot took an increased risk, even in good visibility conditions.

The FLARM obstacle alert was on but only audible in the helicopter cabin. Consequently, the pilot did not hear the aural alert when the helicopter approached the power line. This highlights that such an installation as a last safety net is not useful if there is too much noise in the cabin. In this case, it can only be attributed to fortunate circumstances that this approach did not end with the crash of the helicopter and the death of the six people on board.

Although Switzerland has an impressive and regularly updated obstacle database, the investigators comment that:

During previous investigations, the SUST has found that helicopter pilots are not sufficiently aware that the obstacle situation recorded in the obstacle charts may be incomplete or incorrect. On the one hand, there may actually be obstacles that go unrecorded due to lack of notification or the fact that they do not reach the required minimum level of 25m above the ground for the ‘notification obligation. On the other hand, the actual obstacles may be different from those shown on the map as in the present case. For example, obstacles whose height is not continuously greater than 25 m above the ground appear as individual sections on the online obstacle map (WeGOM).

On the return flight after the wire strike SUST advises:

This decision is understandable in the context of deteriorating weather conditions, but involves risks. Despite the absence of vibrations or exceeding engine parameters, only an inspection can guarantee the airworthiness of the helicopter after contact with the main rotor.

We discussed another case where a flight back to base post blade strike occurred here: Sécurité Civile EC145 Mountain Rescue Blade Strike

The European Safety Promotion Network Rotorcraft (ESPN-R) has a helicopter safety discussion group on LinkedIn.  You may also find these Aerossurance articles on wire strikes of interest:

The European Safety Promotion Network – Rotorcraft (ESPN-R) has published this video and guidance in cooperation with EASA: