On 5 March 2017 Bell 412EP JA97NA of the Nagano Fire and Disaster Prevention Aviation Center took off from Matsumoto Airport to conduct rescue training.  Visibility was good and the helicopters was flown single pilot, with a mechanic / hoist operator in the left hand seat and 7 rescue personnel in the cabin.  At around 13:41 local time, it was destroyed when it collided with trees and crashed onto the slopes of Mt. Hachibuse, Matsumoto City, Nagano Prefecture. All on board were fatally injured. 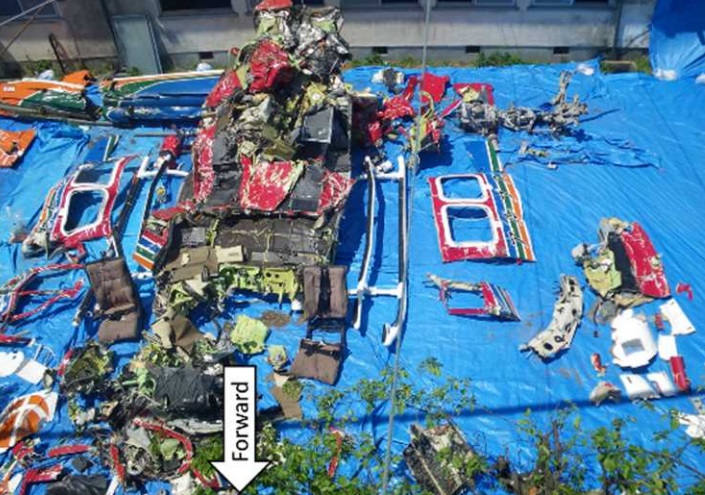 The investigators of the Japan Transport Safety Board (JTSB) had the benefit of footage from a helmet camera worn by one of the rescue team.  However, the aircraft had neither a Flight Data Recorder (FDR) nor a Cockpit Voice Recorder (CVR). In their investigation report the JTSB explain the the helicopter’s route was estimated as follows: 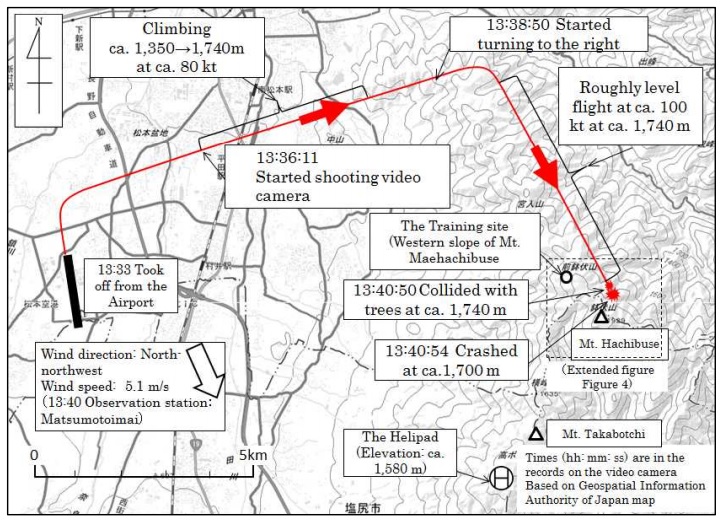 After taking off from the Airport, the helicopter climbed at a speed of approximately 80 kt while heading northeast from the area above the city to over the mountains located about 9 km northeast of the Airport.

The helicopter leveled off at about 1,740 m (5,700 ft)… It is somewhat likely that this was because the helicopter was trying to ensure the safety altitude of 150 m or higher from the destination, the Helipad, with an elevation of about 1,580 m. [It] then turned right over the mountains and headed toward Mt. Hachibuse, continuing roughly level flight at a speed of about 100 kt and at an altitude of about 1,740 m.  It is probable that the helicopter should have gone directly to the Helipad after turning right… 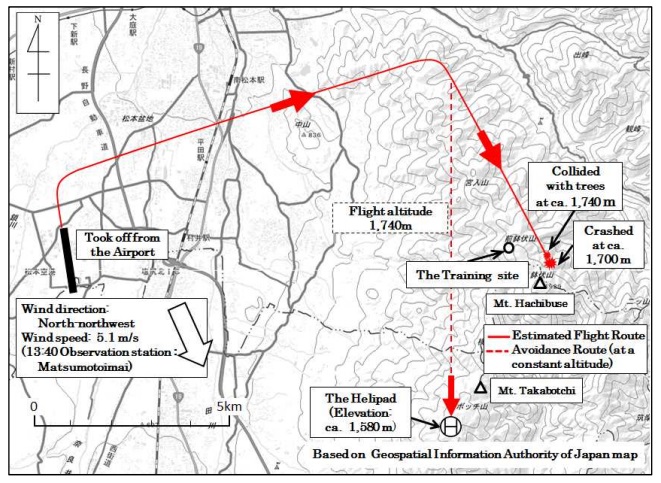 …it is probable that this circuitous route was taken in order to make time to conduct engine data checks en route.

The mechanic was mostly likely occupied with recording engine data.  The pilot’s right arm was observed to move briefly in the recorded video.  The investigators confirmed that the pilot had taken photos during the flight, something he had been warned against previously.

The higher the mountains’ elevation got, the lower the helicopter’s altitude above ground level (AGL) became, despite the tree-covered mountainside that was looming ahead…

…the helicopter collided with trees while maintaining attitude and speed. Branches and leaves scattered throughout the interior and about four seconds later, recording the video images stopped. The crash site was an approximately 40-degree north-facing slope covered with snow at an elevation of approximately 1,700 m, approximately 700 m north-northeast from the summit of Mt. Hachibuse (elevation: 1,928.8 m). 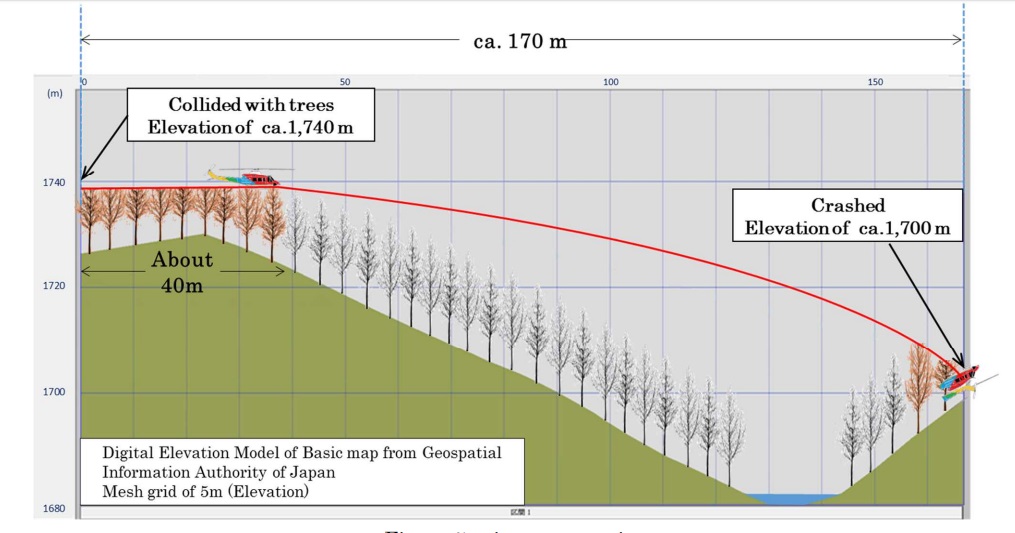 The helicopter was turned upside-down with the nose pointing southwest. Much of the cabin was damaged by the force of impact from the front and above. Most of the aft fuselage was severely damaged with the engine attached to the engine deck. 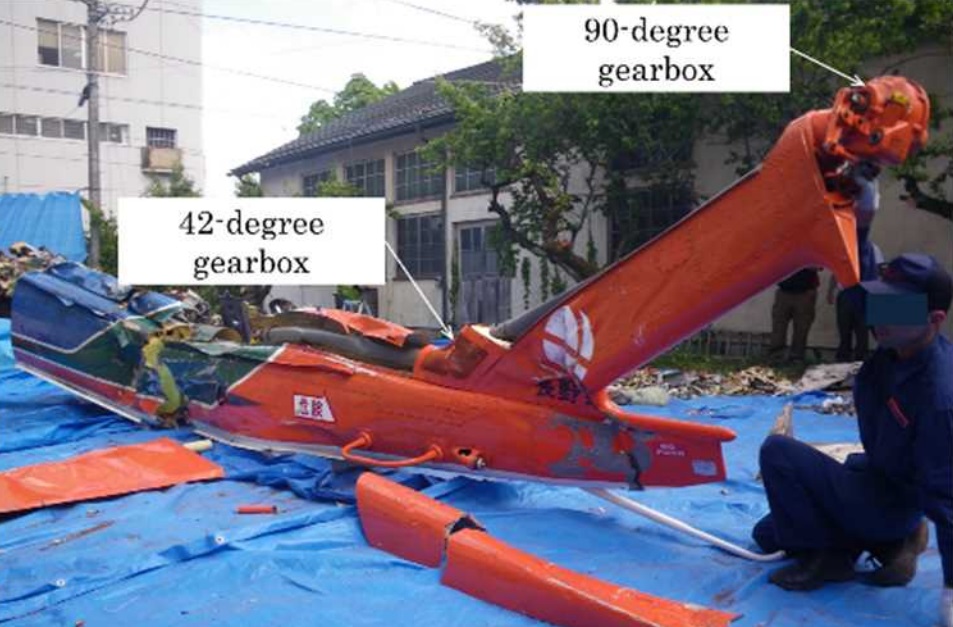 The Emergency Locator Transmitter (ELT) did not activate. Autopsy conclusions were that:

The [56 year old] captain died from cardiac and aortic injury and the cause of death for the mechanic and seven rescuers were multiple trauma, all of which were caused by extremely strong blunt blows on the whole body.

The pilot had a past medical history, discussed in detail by the JTSB, that they concluded should have been declared. Intriguingly they do not directly link the pilot’s recorded cause of death with pre-impact pilot incapacitation.  However, the pilot had recently returned from a vacation in Finland and…

…it is somewhat likely that the captain…was in a state where the arousal level was lowered with microsleep, and so on, due to the effects of fatigue and time difference. However, it was not possible to clarify whether he actually fell into such a state.

The TSB state that:

It is highly probable that this accident occurred because while flying over the mountains, [an] avoidance maneuver was not taken even though the helicopter was getting close to the ground, resulting in the collision with trees and the crash. It is somewhat likely that any avoidance maneuver was not taken…because the captain’s arousal level was reduced and could not recognize the dangerous situation, however it was not possible to clarify whether he actually fell into such a state.