Helideck safety alerts have recently been released by the Helideck Certification Agency (HCA) and the US Bureau of Safety and Environmental Enforcement (BSEE).

Refuelling Hoses Left Out on the Helideck

The HCA say in a safety alert, further distributed by Step Change in Safety:

The hose winding mechanism on fuel cabinets can breakdown which makes it difficult to rewind the hose back into the cabinet after a refuelling operation. Consequently helideck teams are leaving the hose laying out around the perimeter of the helideck.

This practise MAY be acceptable for a short term pending rectification of the system, PROVIDING an adequate & robust risk assessment is in place and the hose is PROPERLY MANAGED for EVERY helicopter movement.

The safety concerns stated by the HCA are:

Because of this near miss and the increasing tendency for installations to leave the hose out on deck; HCA are minded to take a much harder line on instances where the duty holder does not have a satisfactory risk assessment or a suitable rectification plan in place to bring the system back in to compliance promptly, say within 6-months.

Upon notification that the system is not operating correctly, HCA will register the system as ‘Non-Compliant’ and issue a Temporary Limitation Notice (TLN) to helicopter Operators advising them of the situation and requiring them not to land with the hose laid downwind. Pilots will be asked to report all such occurrences.

Where a suitable rectification plan is not available, refuelling operations will be suspended until the system is returned to full serviceability.

In 4 months over the summer there were “at least 5 near misses involving helideck hazards” on US oil and gas installations according to BSEE:

UPDATE 17 April 2017: An example of a tail rotor strike on structure adjacent to a helideck and a subsequent heavy landing was recorded on 15 April 2017 when Sikorsky S-92A PR-CHR, operated by CHC affiliate BHS, on a floating installation off Macae, Brazil: Video 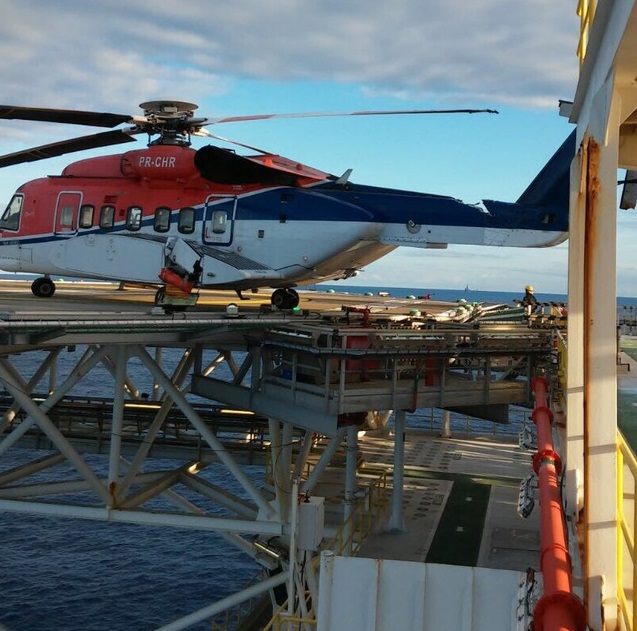 UPDATE 20 February 2018:  BSEE, the US offshore regulator, publishes Safety Bulletin 010 “Complacency in Aviation is Everyone’s Challenge” that discusses a flight requested to wrong offshore location, take off with tie downs still installed and walking past a tail rotor.