The US National Transportation Safety Board (NTSB) has recently reported on two cases in October 2015 were helicopters offshore suffered accidents after the tie-downs were not fully removed:

On 21 October 2015 Bell 206B N1060C was being prepared for take-off from the 74m Fishing Vessel Majestic Sun off Christmas Island, Kiribati in the Pacific for a fish spotting flight.  The NTSB say: 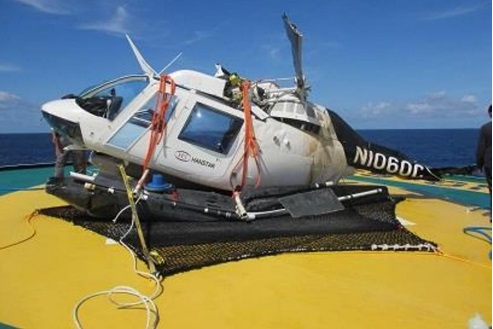 Wreckage of B206B N1060C on the Deck of a Fishing Vessel in the Pacific (Credit: Operator via NTSB)

In this case it appears that the tie downs were applied to the floats and were removed after the pilot boarded the helicopter (not unreasonable for operation on a small moving deck).

The operator reported that:

…the pilot and aircraft began the operational day at High Island A 264, an offshore platform located in
the Gulf of Mexico. The pilot began his duty day at 06:25 CST. At 08:07 the aircraft departed the platform with the pilot and one passenger onboard destined for another offshore location, West Cameron 149 arriving at 08:41.

The pilot dropped off his passenger and flew the aircraft with no passengers to another offshore location; West Cameron 167 arriving at 08:51 . The pilot shut down the aircraft and secured the main rotor system by attaching a rope to the forward left main rotor blade and tying the rope end to the left front skid cross tube. He then went inside the platform facility for slightly over 3 hours while waiting for a call to return to West Cameron 149 to pick  up the passenger. 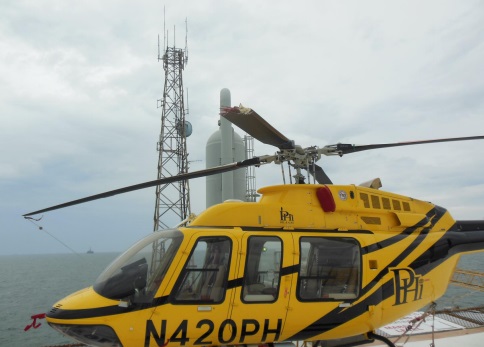 There is also a warning in this section that states, “Failure to remove rotor tiedowns before engine starting may result in severe damage and possible injury.”

While in both these cases it became evident rapidly, and dramatically, that a tiedown remained attached, that is not always the case.   On 9 April 2010 the NTSB report that a fatigued pilot of a US HEMS Bell 222 N222UT left a tail rotor tiedown attached (having ‘assumed’ that the flight nurse had removed it). This resulted in damage to a tail rotor blade and all of the pitch change links.  Also noteworthy (and perhaps a further indication of fatigue) is that while the damage was spotted when picking up the patient, the return flight was still made.

At least 10 years ago there was a deck tie-down occurrence involving a Enstrom 480B, reportedly on a Greenpeace vessel off Ireland:

Deck nets are normally not used with skid equipped helicopters because of the snagging hazard.

UPDATE 20 February 2018:  BSEE, the US offshore regulator, publishes Safety Bulletin 010 “Complacency in Aviation is Everyone’s Challenge” that discusses a flight requested to wrong offshore location, take off with tie downs still installed and  walking past a tail rotor. 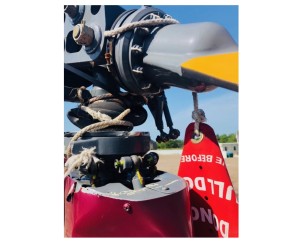 Aerossurance has extensive air safety, offshore helicopter operations, helideck and accident analysis experience.  For aviation advice you can trust, contact us at: enquiries@aerossurance.com