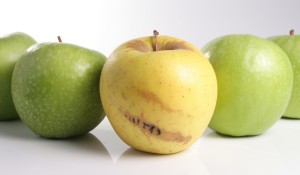 During an on-line discussion about an Aerossurance post to mark the 20th anniversary of a CFIT accident in Guam, there was criticism that the NTSB ‘Probable Cause‘ was:

The captain’s failure to adequately brief and execute the nonprecision approach and the first officer’s and flight engineer’s failure to effectively monitor and cross-check the captain’s execution of the approach.

Some contributors rightly felt this simplistically blamed the crew (i.e. taking a ‘bad apple’ ‘old view’ of human error) rather than explained the accident. Others pointed out the accident was 20 years ago and investigators take a more sophisticated approach today. So we decided to look at the full NTSB air accident reports issued since the start of 2016:

That’s a 5.5 out of 8 bad apple index (69%) as far as we are concerned! In the NTSB Board debate over the one case (AAR1701) where the Probable Cause was not crew actions (or inactions), Board member Robert Sumwalt, who has recently been sworn in as NTSB Chairman, objected to the original draft Probable Cause saying:

This pilot did not do what he was supposed to do. But if we dig deeper — and that’s what really bothers me about the original probable cause is that it is saying that the pilot screwed up… To put the pilot as the primary factor of the probable cause is just wrong, because it points to the last person who made the last mistake. I think we need to dig deeper to get to the root cause of this.

So while the concept of Probable Cause is enshrined in US law, perhaps we will see a change of interpretation in future.  Certainly the Contributory Factors identified by the NTSB are often better indications of what caused an accident than the official Probable Causes.

UPDATE 7 March 2019:  AAR1901: The Probable Cause was: “the jammed condition of the airplane’s right elevator…” However “Contributing to the survivability of the accident was the captain’s timely and appropriate decision to reject the takeoff, the check airman’s disciplined adherence to standard operating procedures….”.

If we score this as -1 ‘bad apples’, because of the mention of positive crew performance, this takes our bad apple index to 4.5 out of 9 (50%). UPDATE 19 June 2019: Discussed by NTSB further here: Why we care when things go right

UPDATE 30 March 2019:  AAR1902:  The Probable Cause was: “the pilot-in-command’s attempt to salvage an unstabilized visual approach, which resulted in an aerodynamic stall at low altitude”.

UPDATE 24 January 2020: AAR1904 The Probable Cause was:  “Liberty Helicopters Inc.’s use of a NYONair-provided passenger harness/tether system, which caught on and activated the floor-mounted engine fuel shutoff lever…”.

UPDATE 6 June 2020: AAR2001 The Probable Cause was: “Survival Flight’s inadequate management of safety, which normalized pilots’ and operations control specialists’ noncompliance with risk analysis procedures and resulted in the initiation of the flight without a comprehensive preflight weather evaluation, leading to the pilot’s inadvertent encounter with instrument meteorological conditions, failure to maintain altitude, and subsequent collision with terrain.

UPDATE 5 August 2020: AAR2002 The Probable Cause was: “…the inappropriate response by the first officer... Contributing to the accident was the captain’s failure to adequately monitor the airplane’s flightpath and assume positive control of the airplane to effectively intervene. Also contributing were systemic deficiencies in the aviation industry’s selection and performance measurement practice…. Also contributing to the accident was the Federal Aviation Administration’s failure to implement the pilot records database in a sufficiently robust and timely manner.

UPDATE 9 February 2021: AAR2101 The Probable Cause was: “…the pilot’s decision to continue flight under visual flight rules into instrument meteorological conditions, which resulted in the pilot’s spatial disorientation and loss of control. Contributing to the accident was the pilot’s likely self-induced pressure and the pilot’s plan continuation bias, which adversely affected his decision-making, and Island Express Helicopters Inc.’s inadequate review and oversight of its safety management processes.

UPDATE 15 May 2021: AAR2104 Probable Cause was: “…the inherent limitations of the see-and-avoid concept, which prevented the two pilots from seeing the other airplane before the collision, and the absence of visual and aural alerts from both airplanes’ traffic display systems…”.

James Reason, Professor Emeritus, University of Manchester wrote in his classic 1997 classic Managing the Risks of Organizational Accidents that among some of the problems with managing human errors are:

Causes are those events which alone, or in combination with others, resulted in injuries or damage.  Causes are defined as actions, omissions, events, conditions, or a combination thereof, which led to the accident or
incident.

The determination of causes and/or contributing factors should be based on a thorough, impartial and objective analysis of all the available evidence. Any condition, act or circumstance that was a causal factor in the
accident should be clearly identified. Seen together, the causes should present a picture of all the reasons why the accident occurred. The list of causes should include both the immediate causes and the deeper or  systemic causes.

Even though the purpose of ICAO Annex 13 accident investigation reports is not to assign blame or liability:

The causes/contributing factors should be formulated in a way which, as much as practicable, minimizes the implication of blame or liability.

The Manual gives these examples of formulating causes and contributor factors, with the right had column being preferable: 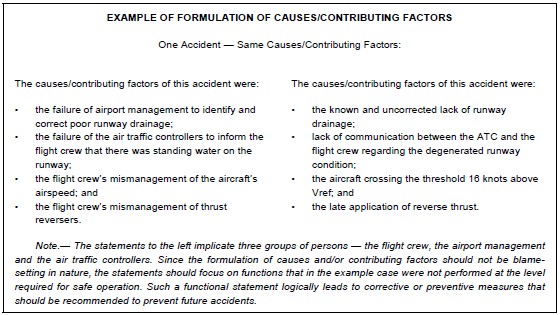