The US National Transportation Safety Board (NTSB) have meet to discuss the accident to Delta Airlines Flight 1086, MD-88 N909DL, that suffered a runway excursion on a snow covered runway at New York La Guardia on 5 March 2015 (Final Report).  The use of excessive reverse thrust resulted in loss of direction control, but noticeably there was a significant delay to the evacuation (which took 17 minutes to complete). 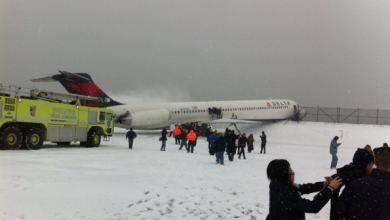 Delta MD88 N909DL at Rest on an Embankment at LGA (Credit: NTSB)

The aircraft broke the perimeter fence and came to rest on an embankment adjacent to Flushing Bay.  The left wing was damaged by the fence, causing a fuel leak.  The fuselage and interior were also damaged as were the main batteries.

The 2 pilots, 3 cabin crew and 98 of the 127 passengers were uninjured.  The remaining 29 passengers received only minor injuries.

The flight crew was well prepared for the approach and established landing requirements that were consistent with company policies.

The flight crew was concerned about the available landing distance on runway 13 and, while en route to LGA, spent considerable time analyzing the airplane’s stopping performance.  The flight crew also requested braking action reports about 45 and 35 minutes before landing, but none were available at those times because of runway snow clearing operations. The unavailability of braking actions reports and the uncertainty about the runway’s condition created some situational stress for the captain, the Pilot Flying.

…the flight crews of two preceding airplanes (which landed on the runway about 16 and 8 minutes before the accident landing) reported good braking action on the runway, so the flight crew expected to see at least some of the runway’s surface after the airplane broke out of the clouds.

Even though…observations of snow on the runway were inconsistent with the expectations…their decision to continue the approach was appropriate because the landing criteria had been met.

…postaccident simulations showed that the braking action at the time that the accident airplane touched down was consistent with medium (or better) braking action.

Although the runway was contaminated with snow, runway friction when the accident airplane landed was sufficient for stopping on the available runway length. 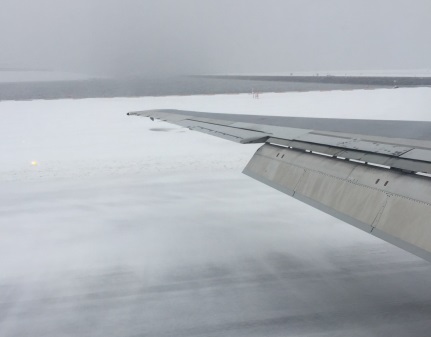 Passenger Photo Taken During Landing of Delta Flight 1086 at LGA on 5 March 2015 (Credit: via NTSB)

…the snowier-than-expected runway, short runway length, and body of water off the departure end of the runway, likely exacerbated the captain’s situational stress and prompted him to make an aggressive input on the thrust reversers.

When in reverse thrust, buckets deploy behind the rear-mounted engines of the MD-88 to deflect thrust forward. 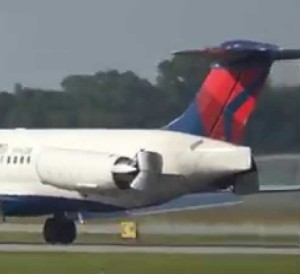 This reduces the airflow over the vertical stabilizer and rudder and reduces aerodynamic directional control, a phenomenon known as ‘rudder blanking’. 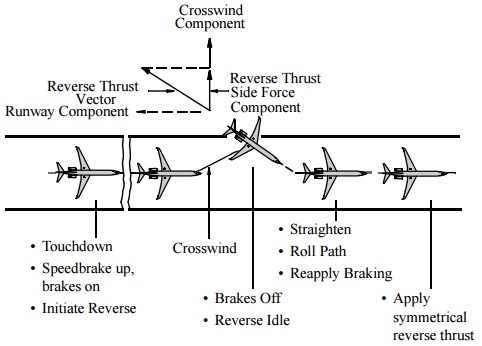 Directional Control when Landing on a Slippery Runway (Credit: Delta via NTSB)

Consequently, Boeing recommend limiting the Engine Pressure Ratio (EPR), a measure of engine thrust, to a maximum of 1.3 on contaminated runways, where direction control from nose steering is least effective. Delta’s Flight Crew Training Manual and MD-88/90 fleet bulletins issued in November 2014 and February 2015 however referred to this as a target. 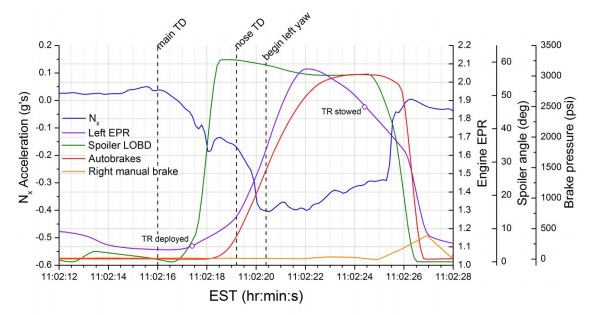 The NTSB sampled data from 80 Delta MD-88 landings.  Boeing’s recommended maximum of 1.6 EPR on dry runways was exceeded 44% of the time. In a sample of 14 landings on potentially contaminated runways, all had exceeded 1.3 EPR and 57% exceeded 1.6 EPR.

The captain was unable to maintain directional control of the airplane due to rudder blanking, which resulted from his application of excessive reverse thrust….the first officer promptly identified rudder blanking as a concern and the captain stowed the thrust reversers in response

…departure from the left side of the runway could not be avoided because directional control was regained too late to be effective.

The thrust reversers were stowed nine seconds after main gear touchdown when the engines were both at about 1.6 EPR.  The aircraft departed the left side of the runway approximately 14 seconds after touchdown. 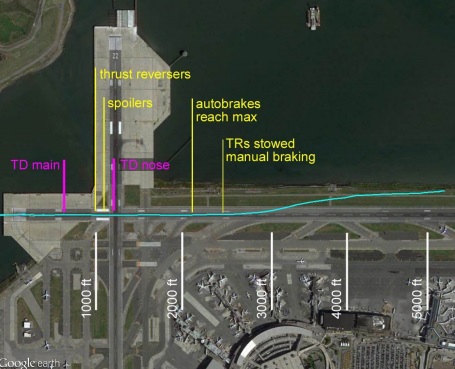 The Landing and Runway Excursion of MD88 N909DL at LGA (Credit: NTSB)

A callout when reverse thrust exceeds 1.3 engine pressure ratio during landings on contaminated runways could help avoid rudder blanking and a subsequent loss of directional control.

An automated alert could help minimize the possibility of reverse thrust engine pressure ratio exceedances during the landing rollout.

This accident demonstrates the continuing need for objective, real-time, airplane-derived data about runway braking ability for flight crews preparing to land with runway surface conditions that are worse than bare and dry.

By not using its continuous friction measuring equipment during winter operations, LaGuardia Airport did not take advantage of a tool that would allow the airport to objectively assess the effectiveness of snow removal operations on contaminated runways.

The Federal Aviation Administration’s airport winter operations safety guidance is not sufficiently clear about the timing and need for updated runway condition reports, which could result in flight crew uncertainty about possible runway contamination.

The flight and cabin crews did not conduct a timely or an effective evacuation because of the flight crew’s lack of assertiveness, prompt decision-making, and communication and the flight attendants’ failure to follow standard procedures once the captain commanded the evacuation.

The flight attendants were not adequately trained for an emergency or unusual event that involved a loss of communications after landing, and the flight attendants’ decision to leave their assigned exits unattended after the airplane came to a stop resulted in reduced readiness for an evacuation.

This and other accidents demonstrate the need for improved decision-making and performance by flight and cabin crews when faced with an unplanned evacuation.

Aircraft rescue and firefighting personnel would likely have arrived at the accident scene sooner if they had received more timely and precise information about the accident and its location.

Even though the initial uncertainty regarding the total number of passengers aboard the flight, including [two] lap-held children [that were not included in the manifest total but listed separately], did not lead to any adverse outcomes, such uncertainty could be detrimental under other accident circumstances, especially if search and rescue efforts are needed.

UPDATE 18 October 2016: The NTSB release a passenger video that illustrates the relaxed approach to the evacuation:

The National Transportation Safety Board determined that the probable cause of this accident was:

…the captain’s inability to maintain directional control of the airplane due to his application of excessive reverse thrust, which degraded the effectiveness of the rudder in controlling the airplane’s heading.

…the captain’s (1) situational stress resulting from his concern about stopping performance and (2) attentional limitations due to the high workload during the landing, which prevented him from immediately recognizing the use of excessive reverse thrust.

The NTSB made 10 new recommendations, directed to the Federal Aviation Administration, two to Boeing, one to the U.S. operators of MD-80 series airplanes to have a mandatory callout by the Pilot Monitoring when the Pilot Flying exceeds 1.3 EPR on a contaminated runway, and one to the Port Authority of New York and New Jersey to clarify their policies and procedures.

The recommendations include studying reverse-thrust operations and training, researching best practices to reduce EPR exceedances on contaminated runways, strengthening procedures for cabin crew when communication systems have failed, along with general communication, coordination and decision-making and ensuring accurate passenger counts for rescue personnel.

The passengers and crew of Delta flight 1086 were fortunate to have survived this crash with no loss of life or serious injuries.  Proper use, in real time, of precise, accurate, and timely information about the condition of the runway can help make winter operations safer, as well as the study and use of large quantities of data to inform best practices. If today’s recommendations are acted upon, future landings on contaminated runways will be safer because of actions to enable the timely communication and use of information to eliminate potentially life-threatening unknowns.

The Air Line Pilots Association (ALPA) is critical of the report, and the single probable cause in particular.  In a statement they say they are:

The NTSB’s single probable cause failed to fully and directly acknowledge the multiple factors that contributed to the accident.

The NTSB’s Performance Study...concluded that a combination of factors including asymmetric thrust, crosswind, and runway friction caused the aircraft to deviate from the runway heading. As a result of the NTSB’s focus on a single probable cause, the airline industry has missed a valuable opportunity to address the multiple factors involved in the event with the goal of advancing aviation safety.

While they are undoubtedly correct that the probable cause is simplistic, the range of NTSB recommendations is not.

UPDATE 10 June 2020: B767 Fire and Uncommanded Evacuation After Lockwire Omitted

Aerossurance has extensive air safety, airworthiness, operations and accident analysis experience.  For practical aviation advice you can trust, contact us at: enquiries@aerossurance.com