The aircraft was on a certification test flight with a mixed MD / FAA flight crew.  The aim was to determine the distance to land and bring the aircraft to a full stop (as per 14 CFR 25.125).

In their investigation report US National Transportation Safety Board (NTSB) explains the aircraft touched down about 2,298 feet beyond the threshold on the 15,000ft runway 22 at Edwards AFB at 125 KIAS with a vertical velocity of 16.5 ft/s (990 ft/m). 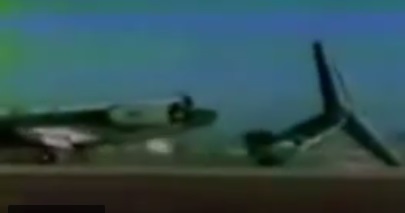 The descent rate at touchdown exceeded the aircraft’s structural capability and the empennage, aft of station 1429, separated from the aircraft and the fuselage buckled in several places. 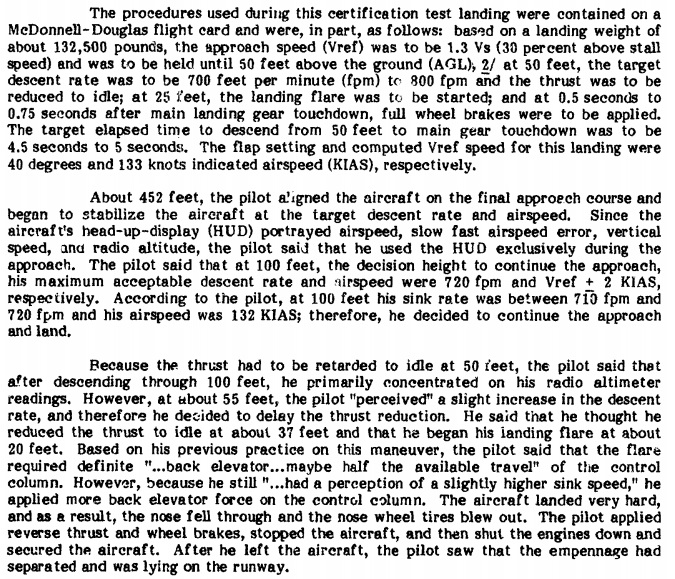 The aircraft came to rest about 5,634 feet beyond the threshold.  An FAA Flight Test Engineer who was standing behind the observer’s seat in the cockpit to record data broke an ankle. 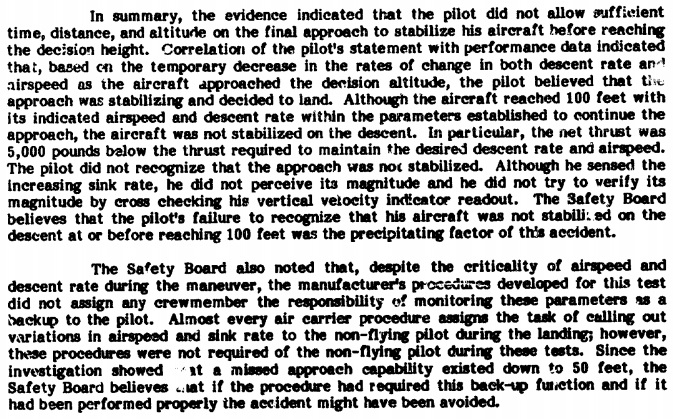 The NTSB’s probable cause was the rather unhelpful statement:

The pilot’s failure to stabilize the approach as prescribed by the manufacturer’s flight test procedures.

More helpfully they go on:

Contributing to the cause of the accident was the lack of a requirement in the flight test procedures for other flight crewmembers to monitor and call out the critical flight parameters.

Also contributing to this accident were the flight test procedures prescribed by the manufacturer for demonstrating the aircraft’s landing performance which involved vertical descent rates approaching the design load limits of the aircraft.

THE NTSB RECOMMENDS THAT THE FEDERAL AVIATION ADMINISTRATION: REVISE THE PROCEDURES WHICH ARE CURRENTLY BEING USED TO DEMONSTRATE MINIMUM LANDING DISTANCES FOR COMPLIANCE WITH 14 CFR 25.125 FOR CERTIFICATION OF TRANSPORT CATEGORY AIRPLANES TO: (A) PROVIDE A HIGHER MARGIN OF SAFETY DURING CERTIFICATION AND (B) ESTABLISH LANDING DISTANCES WHICH ARE MORE REPRESENTATIVE OF THOSE ENCOUNTERED WHEN AN AIRPLANE IS OPERATED DURING AIR CARRIER SERVICE.

The FAA proposed closure based on a revision to the Engineering Flight Test Guide for Transport Category Airplanes.  The NTSB responded that:

The revised procedures, however, do not satisfy the intent of part (b) of Safety Recommendation A-82-24 which addresses the unrealistic nature of landing distance data which results from the disparity between certification procedures and safe operational practices.

They classified this action as: Closed – Unacceptable Action

The FAA response and the NTSB assessment were similar to the previous recommendation: Closed – Unacceptable Action

Just over 6 weeks later, on 19 June 1980 N1002G, the second DC-9-80 series prototype was making a certification test flight with an FAA test pilot in command to demonstrate that the aircraft could be landed safely with a complete hydraulic system failure.  As the NTSB describe:

Inadequate procedures established for certification test flight, and the pilot’s mismanagement of thrust following the initial loss of directional control

A number of safety recommendations were raised.

But the bad news continued as when two 50-ton cranes tried to lift the wreckage, one collapsed and fell on top of the fuselage.