On 11 May 1996 a ValuJet DC-9-32 N904VJ crashed in flames into the Florida Everglades while trying to return to Miami, killing all 110 occupants.  ValuJet was an Atlanta, Georgia based low cost carrier which started operations 26 October 1993.

ValuJet Flight 592 was a scheduled flight from Miami (MIA) to Atlanta (ATL).  The DC-9 was also carrying a small amount of cargo, including mail and ‘company-owned material’ (COMAT).  The COMAT was items being returned to the airline in Atlanta by SabreTech, a sub-contracted maintenance organisation in Miami.  It consisted of three tyres and wheels, and five boxes of cabin emergency oxygen generators, labeled as “Oxy Cannisters – ‘Empty’”, stored in the forward Class D Cargo Compartment.

Seven minutes after take-off the crew identified there was an aircraft fire, but although they attempted to return to MIA, just over 2 minutes later the aircraft impacted the ground. 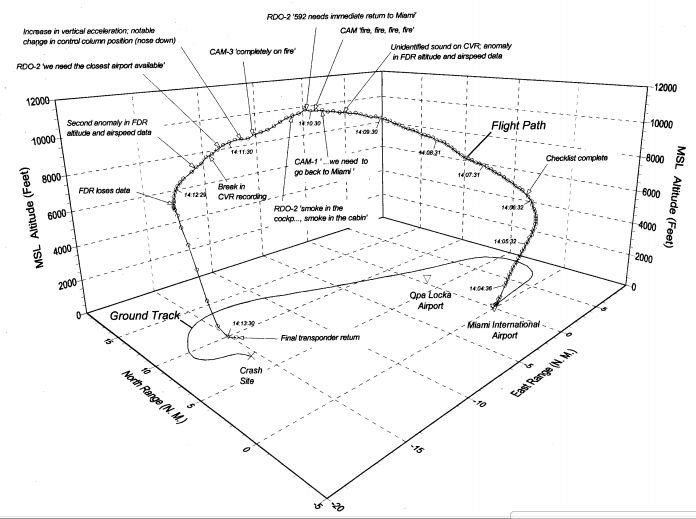 During wreckage recovery from the swamp it became evident that there had been an intense fire in the forward cargo compartment.  During the investigation the NTSB discovered that the 5 boxes of chemical oxygen generators contained more than 100 time expired, but still active, oxygen generators. They say:

The expired oxygen generators had been removed from three ValuJet MD-80 aircraft undergoing maintenance at SabreTech. The Board’s investigation revealed that, although many of the SabreTech mechanics who removed the generators understood the danger they could pose, the generators were nevertheless delivered to SabreTech’s shipping and receiving department without communicating what the items were, or that they were hazardous. Rather than dispose of the generators properly or at least fit them with safety caps designed to prevent their accidental activation, they were boxed up and sent to ValuJet in order to clean up the maintenance area in preparation for a visit by a prospective customer. In addition, they were incorrectly labelled…

The NTSB determined that one or more of the oxygen generators activated. 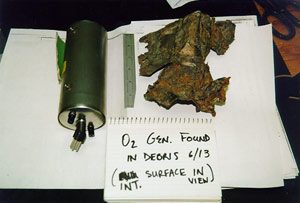 Example Oxygen Generator and one recovered from the Accident Site (Credit: Unknown)

This created both the heat (as a by-product of the chemical reaction) and the oxygen to initiating a fire (fuelled by the tyres) that eventually brought the aircraft down.

…the lack of a formal system in SabreTech’s shipping and receiving department, including procedures for tracking the handling and disposition of hazardous materials, contributed to the improper transportation of the generators aboard flight 592.

ValuJet did not adequately oversee SabreTech:

Had it ensured that SabreTech’s employees were trained on the company’s lack of authority to transport hazardous materials and had received hazardous materials recognition training, SabreTech might not have mishandled the packaging and shipment of the oxygen generators.

In their investigation report the US National Transportation Safety Board (NTSB) determined that:

…the probable causes of the accident, which resulted from a fire in the airplane’s class D cargo compartment that was initiated by the actuation of one or more oxygen generators being improperly carried as cargo, were:

(1) the failure of SabreTech to properly prepare, package, and identify unexpected chemical oxygen generators before presenting them to ValuJet for carriage;

(2) the failure of ValuJet to properly oversee its contract maintenance program to ensure compliance with maintenance, maintenance training, and hazardous materials requirements and practices; and

Contributing to the accident was the failure of the FAA to adequately monitor ValuJet’s heavy maintenance programs and responsibilities, including ValuJet’s oversight of its contractors, and SabreTech’s repair station certificate; the failure of the FAA to adequately respond to prior chemical oxygen generator fires with programs to address the potential hazards; and ValuJet’s failure to ensure that both ValuJet and contract maintenance facility employees were aware of the carrier’s “no-carry” hazardous materials policy and had received appropriate hazardous materials training.

ValuJet has grown from 2 to 52 aircraft in less than 3 years.  In a congressional hearing in June 1996, the Administrator of the Federal Aviation Administration (FAA) David Hinson conceded they had reacted too slowly to safety problems it had discovered at ValuJet:

We did learn some lessons.  It is apparent now that the extraordinarily rapid growth of this airline created problems that should have been more clearly recognized and dealt with sooner and more aggressively.

One concern was that the FAA had a conflicting ‘dual mandate’ to regulate and promote the growth of the industry.  The week before that hearing Transportation Secretary Federico Pena announced he would ask Congress to change mandate to focus only on safety, a change that was subsequently enacted.  Pena had been publicly embarrassed after rashly stating his confidence in the airline the day after the accident.

SabreTech were criminally prosecuted but after a series of trial and appeals, finally only paid a civil penalty.     The company went out of business.

ValuJet had to cease operations during the summer of 1996 and was only allowed to resume operations with a much reduced fleet.  The company bought AirTran the following year and rebranded under that name to distance itself from the stigma of Flight 592.

UPDATE 6 April 2018: FBI offers $10,000 for info on fugitive charged in 1996 ValuJet crash.  Mauro Ociel Valenzuela-Reyes, fled while facing federal criminal charges in 1999. Two other SabreTech employees were subsequently acquitted. The company was found guilty on charges of failing to properly train its employees and reckless transportation of hazardous materials, though a federal court threw out the materials charges on appeal.

The accident is the subject of an on-line FAA ‘lessons learnt’ case study.

One classic journalist account of ValuJet 592 is William Langweische’s Atlantic Magazine article in 1998: The Lessons of ValuJet 592

Aerossurance has extensive air safety, airworthiness, operations and accident analysis experience.  For aviation advice you can trust, contact us at: enquiries@aerossurance.com