A320 Unstabilised Approaches: A Descent Below Minimum Safe Altitude (MSA) and a Runway Excursion at Lyon

An airline introducing a new type suffers a serious incident while training a new captain, highlighting the importance of Management of Change, Risk Assessment and good Training.  UPDATE: Then within a year they have a runway excursion after an unstabilised approach at the same airfield.

The French accident investigation agency, the Bureau d’Enquêtes et d’Analyses (BEA), has recently issued an English translation of a report into a Serious Incident involving a Greek Airbus A320 SX-BHV of Hermes Airlines, operated on behalf of charter carrier Air Mediterranee, on a night approach into Lyon on 11 April 2012.

The flight had departed from Ajaccio, with the Captain as Pilot Non Flying (PNF) and instructor in the right-hand-side seat and a pilot-in-command under supervision as Pilot Flying (PF) in the left seat.

The failure to carry out checks of the RADIO NAV page on the FMGS [Flight Management Guidance System], which are normally carried out when passing FL100 in a climb and during approach preparation, did not allow the crew to detect that the FMGS had not automatically selected the ILS for runway 36L at Lyons Saint-Exupéry and that the Ajaccio AC ILS was still active on arrival.

The BEA go on:

About one minute after the beginning of radar vectoring, the controller, who realized that the aeroplane was high on the glide, asked “…forty nautical […] is that OK for you, four zero?”. The crew, while programming the FMGS for an ILS approach to runway 36L, answered “Actually we… we’ll need to make a thirty six”. The controller, who interpreted the response of the crew as a confirmation of a landing on runway 36, did not understand that the crew wanted to make a late turn onto heading 360. He provided a heading of 315° to the localiser axis for runway 36L. As the Ajaccio AC ILS had not been deselected, the FMGS did not automatically select the ILS for runway 36L at Lyons.

About three minutes later (at the point marked 1 on the graphic below), the controller gave a heading of 270°  to extend the flight path conscious the aircraft was high.  The crew tuned 30 seconds later.  They were distracted by solving the inconsistency in the ILS frequency display (actually a symptom that the FMGS was set to the wrong frequency and was picking up a DME at Marseille, which shared the same frequency as Ajaccio) and by another crew’s read back error. 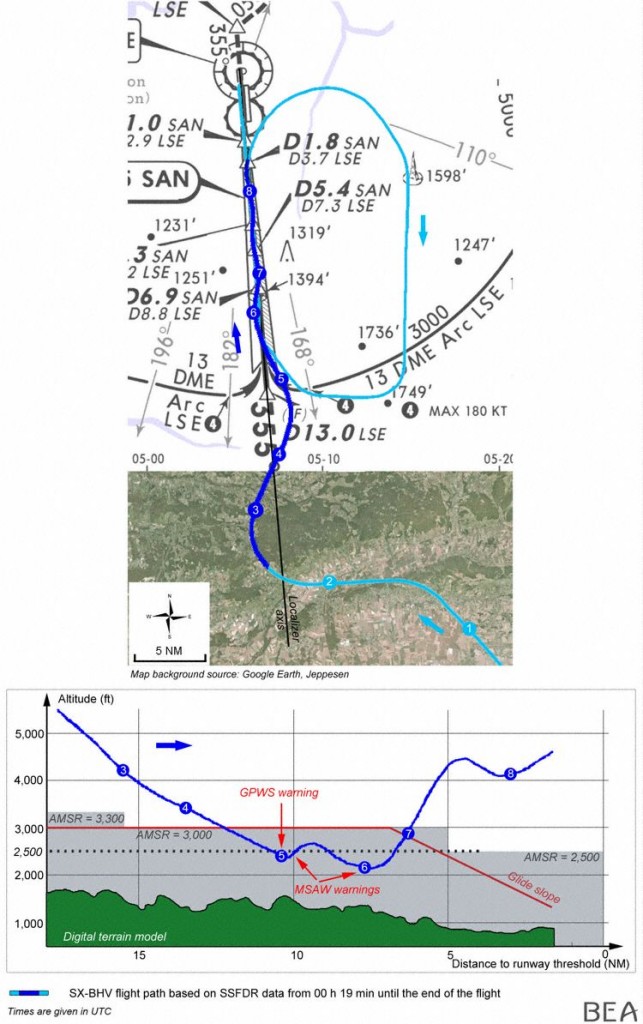 The aircraft crossed the ILS axis twice (between points 2 and 4)  with the ILS frequency being correctly set at point 3 on the graphic.

While the Capture mode engaged for a selected altitude of 3,000 ft at a speed of 240 kt, the crew decided to select an altitude of 400 ft on the control panel (FCU), which caused a mode reversion of the autopilot from ALT* to VS 1200 ft/min, the current vertical speed of the aeroplane at that time. They set the approach mode and engaged the AP 2 autopilot. The crew turned left to intercept the localiser axis, and then the aeroplane descended below the radar minimum safe altitude of 3,000 ft.

While the aeroplane was in clean configuration at a speed of 230 kt and an altitude of 2,460 ft (height of 950 ft), the GPWS “TERRAIN TERRAIN PULL UP PULL UP” alarm sounded (point 5). The instructor took over sole control of the inputs, pushed the thrust levers to the TOGA detent and selected a maximum pitch attitude of 9.5°, without calling out that he was taking over control. Autopilots AP 1 and 2 disengaged. The airplane being in clean configuration, the SRS mode did not engage and did not give the crew the expected nose-up instructions corresponding to the avoidance manoeuvre in progress. The vertical and horizontal guidance modes VS -1200 and HDG were still activated. When the pitch attitude of the aeroplane reached 9°, the instructor applied nose-down inputs.

The air traffic controller’s Minimum Safe Altitude Warning (MSAW) had meanwhile sounded (it was set for 2,500 ft) so:

…the controller called out: “you maintain 2,500 ft, you are too low, you are below the glide” and requested to be called back once the aeroplane was established on the glide path.

The BEA believe instructor now tried to stabilise the aeroplane at an altitude of 2,500 ft, however note:

The nose-down inputs were maintained for about twenty seconds. The thrust lever was positioned in the CLIMB detent. At this moment the crew was waiting for the controller’s instruction to climb. The calibrated airspeed increased sharply and the aeroplane started to descend again to an altitude of 2,150 ft. At 320 kt and a height of 900 ft (Point 6), the thrust levers were positioned in the IDLE detent. At this time, a second MSAW alert was triggered. The controller intervened again: “…check your altitude immediately, you are too low”.

At this point the student in the left seat applied nose-up inputs for about ten seconds while the instructor was applying nose-down inputs. Consequently the aural and visual DUAL INPUT warnings were triggered. Simultaneously the PNF was communicating with ATC and requested radar vectoring to abort the approach. BEA comment that:

Communications, probably referring to taking over control, were confused “PF: “[leave it, leave it]”, PNF “[you take it]”, PF “[I have the controls, 5,000 ft, leave it, 5,000…. ;]”. The controller asked the crew to climb to 5,000 ft (Point 7). As the instructor applied nose-up inputs the student applied nose-down inputs. During this period the aeroplane climbed. The crew placed the thrust levers in the CLIMB detent.

The DUAL INPUT warning stopped. The instructor in the right seat then took over the controls. The AP2 autopilot was connected.

The aeroplane parameters stabilised. A second approach was performed and the crew landed on runway 36L.

The BEA note that when a Terrain Avoidance and Warning System (TAWS) “TERRAIN TERRAIN PULL UP PULL UP” warning is triggered, the Flight Crew Operations Manual (FCOM) stares:

..”at night or in IMC, the emergency procedures must be applied immediately: the PF must disconnect the autopilot and simultaneously apply and maintain a full nose-up input on the sidestick, set the thrust levers to TOGA, check that the speedbrakes are retracted and keep the wings level until a safe flight path is recovered”.

When the first MSAW warning occurred, the controller should have asked the crew to climb immediately to an altitude greater than or equal to 3,000 ft QNH (radar safety altitude). The phraseology used “you maintain 2,500 ft you are too low you are below the glide” probably prompted the crew, who had initiated a climb following the GPWS PULL UP warning, to stop this manoeuvre to maintain an altitude of 2,500 ft.

In relation to the dual inputs:

During the flight, when applying the PULL UP emergency procedure after the GPWS warning, the Captain, PNF, made inputs on the sidestick without making any callout or pressing the sidestick priority button.

On an Airbus A 320, when both sidesticks are used simultaneously, the orders are algebraically added. When dual input is detected, the two lights “SIDE STICK PRIORITY” light up green on the glare shield and the “DUAL INPUT” voice message is generated and repeated during the dual input situation. Each pilot can take priority by pressing the autopilot disconnection pushbutton on the sidestick. Priority will be retained as long as the pushbutton is being pressed. Pressing the pushbutton for more than 40 seconds deactivates the other sidestick.

No activation of the sidestick priority button was recorded during the flight. During the dual input phase, the inputs made by the two pilots were often in opposite directions. The altitude of the aeroplane evolved from 2,200 ft to 4,460 ft and then 4,130 ft, and the aeroplane attitude varied between -1° and 15°.

Significantly, an organisational change was underway at Hermes.  At that time the airline had received 4 A320 to supplement a fleet of Boeing 737 already in service.  The BEA noted that:

Given the urgent need for flight crew and regulatory documentation, the operations manual was drafted hastily and contained inconsistencies in the criteria for appointments to various positions.

The BEA determined this Serious Incident was due to:

Aerossurance observes that properly applied Management of Change and Risk Assessment processes within an operator’s Safety Management System should help identify critical actions to mitigate the risks associated with introducing aircraft with different design philosophies.  However, this incident involved other basic short comings in training and performance.

The BEA have issued their report on a runway excursion after another unstabilised approach by A321 SX-BHS of the same airline in Lyon on 29 March 2013. 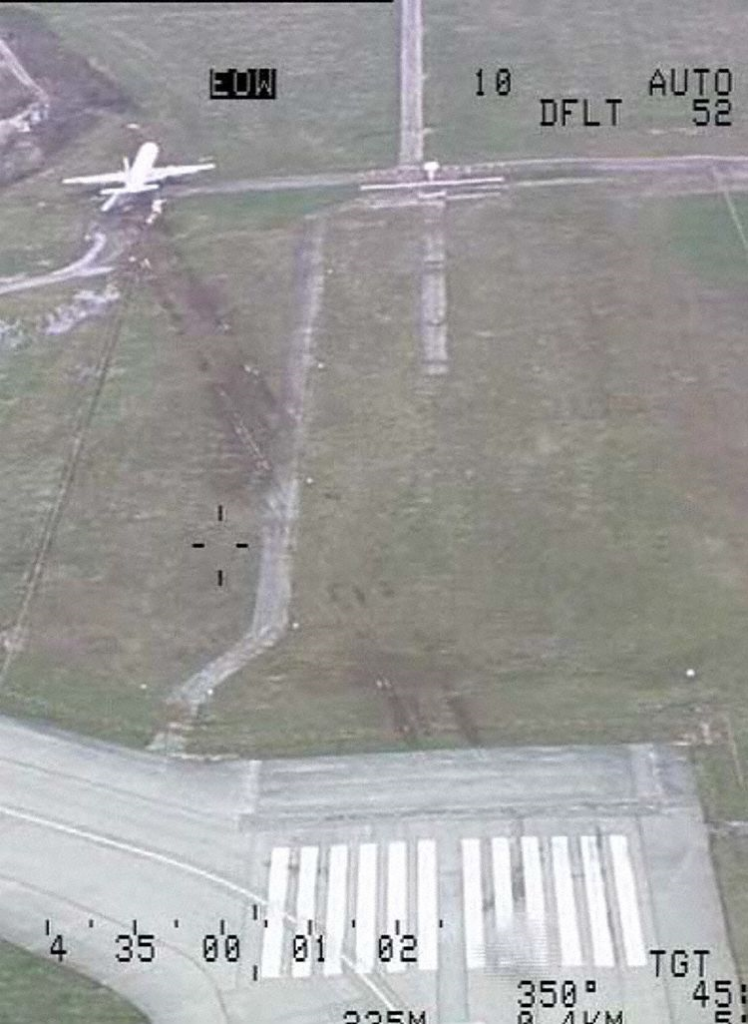 The BEA state the causes of this accident were:

Continuing an approach below the stabilisation height with a speed significantly higher than the approach speed shows that the crew were not adequately aware of the situation, even though they mentioned several times their doubts on the marginal meteorological conditions and on the difficulties in reducing the aeroplane’s speed.

Continuing this unstabilised approach at an excessive approach speed triggered, below 150 ft, an uncommanded increase in engine thrust. The crew’s delayed A/THR reduction below 20 ft made it impossible for the aeroplane to slow down sufficiently for about 15 seconds after passing the threshold.

After descending through 20 ft, the copilot’s inappropriate flare technique and the dual input phenomenon caused by the Captain significantly lengthened the flare phase. The remaining runway distance after the touchdown made it impossible for the aeroplane to stop before the end of the runway.

The BEA say following factors contributed to continuing the unstabilised approach and the long flare:

The BEA say the following organisational factors contributed to the crew’s poor performance:

Aerossurance has recently written about other fixed wing serious incidents and accidents that you might find of interest:

Plus these relevant general articles: