Aborted Take Off with Brakes Partially On Results in Runway Excursion

The crew of a Cessna 550 (Citation Bravo) VH-FGK did not detect anything abnormal during the take-off roll until they attempted to rotate.  After trying full back-pressure without a change in pitch the captain rejected the take-off.  The crew applied full braking and reverse thrust, but the aircraft overran the runway.

The nose landing gear collapsed and the aircraft sustained substantial damage.  The crew, the only occupants, uninjured.

In their investigation report into the accident, which occurred on 25 September 2015, the Australian Transport Safety Bureau (ATSB) say:

The aircraft did not accelerate normally as the acceleration was retarded by drag associated with rolling friction. This was indicative of partial brake pressure remaining during the take-off run.

The partial brake pressure was possibly due to the parking brake being selected on at the holding point with enough pressure to retard aircraft acceleration during the take-off, but not sufficient to prevent the aircraft reaching rotate speed.

Heat in the brakes due to partial pressure during the take-off run may have reduced their effectiveness when the captain rejected the take-off, contributing to the runway overrun.

The ATSB go on to explain:

The parking brake was set by either pilot applying and holding footbrake pressure and [in addition] the pilot in the left (captain’s) seat pulling out the parking brake lever underneath the left instrument panel.

The lever could be selected OFF or fully ON. There was no partial release position of the lever. When the lever was pushed forward from the ON position, pressure in the lever would continue to release the lever until it was [fully] in the OFF position.

In 2010, a Cessna Citation CJ1, registered N646VP, overran the runway at Leeds Bradford Airport, West Yorkshire, UK. During the take-off run, the pilot assessed that the aircraft would not accelerate to V1 and rejected the take-off. As the pilot braked, both brakes failed, the right brake caught fire and the aircraft overran the end of the runway. The accident investigation by the UK Air Accident Investigation Branch (AAIB), and reported in AAIB Bulletin 3/2011, concluded that the brakes were probably on, at least partially, during the take-off run.

The US National Aeronautics and Space Administration (NASA) provided the ATSB with a report of Cessna Citation parking brake engaged or partially engaged during takeoff roll incidents from the Aviation Safety Reporting System (ASRS). This included the following two reports:

A Cessna 525 [Citation CJ1] owner/pilot reports hiring a professional pilot to fly him to an airport due to a strong gusty wind forecast. The professional pilot forgets to release the parking brake prior to take-off and this omission is not detected until airborne. Upon landing the right brake is locked and the right tire fails causing directional control problems.

On landing, a Cessna 550 blew both main tires which was caused by a partially engaged parking brake. There is no warning system or light that indicates the parking brake is still engaged.

A Senior Investigator from Textron Aviation (Cessna) indicated that there have been similar events where pilots have attempted to take off with the parking brake set and enough pressure to keep the aircraft rolling at idle thrust, resulting in similar incidents.

This led to the publication of an article in Cessna’s Direct Approach magazine issued in December 2008, which reminded operators to make sure to disengage the parking brake.

Other factors that increased risk:

The ATSB issued a safety recommendation that Textron Aviation (Cessna) to:

For pilots, this incident highlights the importance of attention to the configuration of the aircraft and cockpit settings at all stages of flight, but particularly during take-off.

For manufacturers, this incident highlights the importance of systems that bring an irregular or abnormal configuration or cockpit setting to the attention of the crew, especially when that configuration has the potential to adversely affect aircraft performance or control.

From a human factors perspective, the design of a system using a lever that can only be seen by one member of the crew, can be ON even when partially moved, may need to be used on an ad hoc basis (e.g. while stopped on a taxiway), has no status indication, which is out of the normal scan pattern and does not feature in the key check-list, is a design where errors will occur (as evidenced by the occurrences the ATSB have highlighted).

We have commented on the importance of timely reactions here: NASA ASRS at 40 and the Continued Challenge of Timeliness and of continued airworthiness reactions here: Anniversary of Newfoundland S-92A Accident

However, this accident also highlights the insanity of over-reliance on in-service feedback (e.g. safety reporting) within organisational safety management systems instead of identifying the potential for error and addressing it during design (be design of a product, process or procedure).

After that, the airplane impacted the ground then a building and was destroyed, and the two pilots and two passengers were fatally injured. One occupant of the building that was impacted sustained serious injury and three occupants sustained minor injuries.

NTSB go on to say another dramatic accident had also not prompted action:

A similar accident occurred on August 21, 2019, near Oroville, California. The pilots reported that after the Cessna 560XL airplane, N91GY, reached Vr during the take off roll, the airplane did not respond to the pilot flying pulling the yoke aft for take off. 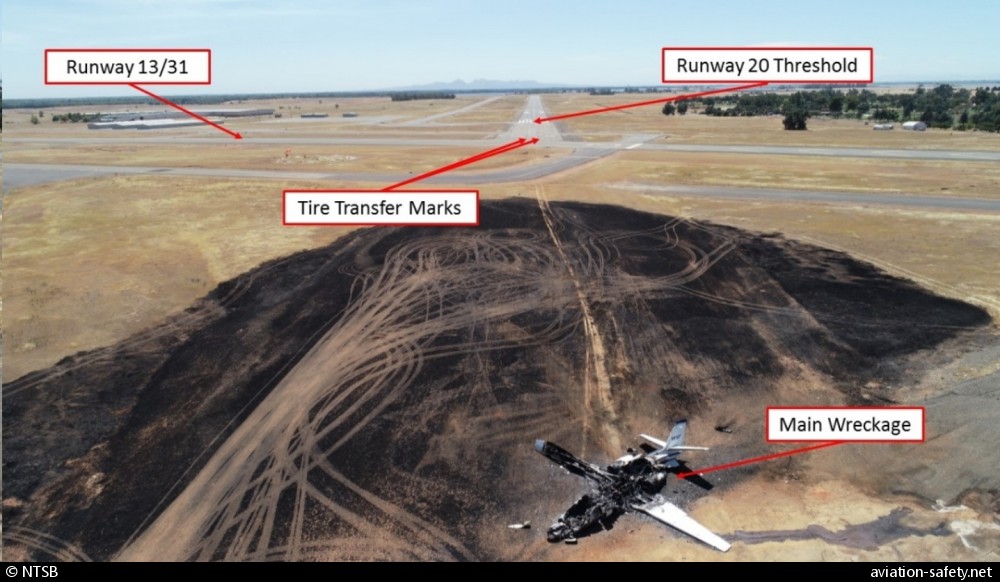 …Textron stated that the recommended actions were not needed because it was “simple airmanship” to remember to release the parking brake before the take-off run; Textron neither updated its pre-take off checklists nor added a parking brake annunciation.

However, in order to certify the aircraft in Europe a modification was certified which includes a “no take off” annunciation for a parking brake that is not fully released.  This however remained an option elsewhere despite this steady serious of accidents (which ultimately costs 4 lives).

You may also be interested in this article: Cessna Citation Excel Controls Freeze