We examine three incidents where fasteners were forgotten during maintenance.  It two cases these maintenance errors resulted in parts falling from the aircraft.  In a third, a massive fuel leak occurred.

The aircraft was in Ireland for the low-level Tellus survey project of the Geological Survey of Ireland:

The aircraft is equipped with three geophysical instruments which measure the magnetism, radioactivity and conductivity of the Earth below. It undertakes measurements as it flies at a speed of approximately 130 mph (approx 216km/h).

On take-off from Weston Airport, County Kildare the nose cone from the right hand mission equipment pod fell from the aircraft… 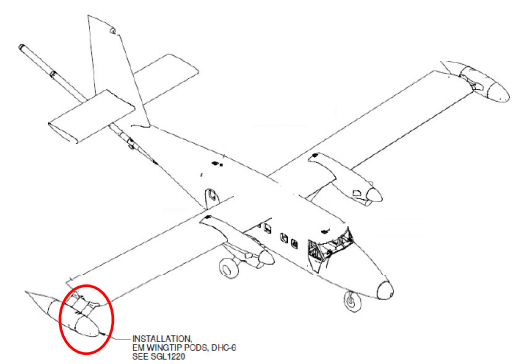 The Flight Crew experienced a significant amount of yaw to the right which they felt through the flying controls. The aircraft diverted to Dublin Airport where it subsequently landed safely. There were no injuries.

One of the three sensors in use was an Electro Magnetic (EM) system.  A signal is transmitted from the right hand wing tip pod and the signal is received in the left pod.

On 14 August 2015, the day before the event, in accordance with the maintenance instructions prescribed in the [mission modification’s Supplemental Type Certificate] STC, the aircraft underwent a 125 hour Supplementary Inspection. This inspection called, inter alia, for the removal of “the EM pod nose and tail cones” and inspection of “the pod internal frames for cracks or other damage”. …the Operator’s standard practice calls for the fitting of flagging tape when parts are removed and that the flagging tape should only be removed following re-installation of the removed part(s). On this occasion the personnel involved advised the Investigation that flagging tape was not fitted. It was reported that during the EM Pod maintenance, while the nose cone was being reinstalled, a fault was detected with its sensor system. Re-installation of the nose cone was halted pending identification of the cause of the fault and consequently only the top two nose cone retaining screws were re-installed. Troubleshooting subsequently traced the origin of the sensor problem to a location inboard of the pod and the fault was rectified. The Inspection was then completed but the 14 remaining nose cone retaining screws were not re-installed. 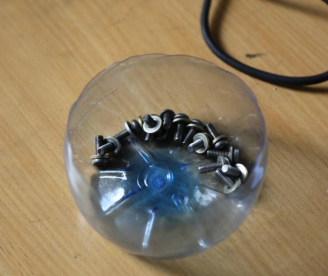 All personnel who completed walkaround inspections on the morning of the event had completed a third party, computer based Aviation Maintenance Human Factors course…

There is no mention of the use of more interactive or tailored training. The check was recorded in the Tech Log but it would not necessarily have been apparent that the nose cone had been removed to the crew.   The Flight Manual Supplement does have a requirement to “check that all visible attaching fasteners are installed and secure”. The Commander said that he “…there’s not any moving parts on the pods. I had a cursory look at the pods probably from about fifteen feet ahead of the pods and from my vantage point I didn’t notice anything unusual”.  As he then got closer he was distracted with questions about an engine run during.

In their analysis the AAIU consider human factors and note that:

Visual detection of an installation error is often accomplished by identifying and noting something which stands out from its surroundings; for example, if six bolts secure a housing and only five are installed an observer will usually notice the vacant hole which “stands out” amongst the other five, installed bolts.   In the case of the nose cone, none of the screws in the fourteen positions which are visible from the ground had been installed. Consequently, all the holes visible from the ground would have “looked the same” even though fourteen screws were missing.

“Confirmation bias” may have compromised the technical personnel’s walkaround inspection since they believed that they had correctly re-installed the nose cone on the day prior to the event.

“Habituation” may have played a role in compromising all the walkaround inspections as those involved were used to inspecting the EM pods and not finding any anomalies. Finally, the Commander’s report that as he got closer to the wing both engineers approached him for a briefing underneath the right hand pod “a third into” his walkaround, may have been an “interruption”/“distraction”.

The AAIU elaborate that:

“Confirmation Bias” is a known, subconscious behaviour whereby humans seek and “see” evidence that supports their own belief. In aircraft maintenance, personnel who believe that they have completed a task correctly may, due to confirmation bias, not notice visual cues which would suggest otherwise, or which they might notice if they did not have confidence that the task had been completed correctly.

“Habituation” is the response of a human to a stimulus which they experience repeatedly and whose effect on them is unremarkable either in a good or bad way. Habituation is a natural way for our brains to separate (filter) the matters which demand our attention (because they are of critical significance), from those which don’t (because they are not critically significant). In aviation maintenance, where certain checks e.g. a daily walkaround inspection, are repeated frequently without any findings of significance, it is possible for the individual carrying out the checks to become habituated and this may compromise their ability to detect an anomalous condition. Habituation can lead to items of significance which the eye “detects” not being “perceived” by the brain as something warranting further action.

The Operator informed the Investigation that at the time of the event the use of flagging tape was a ‘standard practice’ [sic] but was not in the Operator’s Policy Manual. Since the event the Operator’s Policy Manual has been updated to include a documented policy mandating the use of flagging tape and also of cloth bags to hold hardware that are attached to the parent component to aid as a visual cue. The Operator issued a maintenance memorandum requiring all attaching hardware to be painted the same colour as its background. The Operator believes that this will provide an enhanced visual cue in the event of required hardware not being installed. The Operator also informed the Investigation that it is in the process of building its own Human Factors (HF) course with details and content tailored to the Operator’s specific roles and aircraft. Further they stated that this internal course will include more case studies of actual Operator events and scenarios likely to be encountered by its pilots and maintenance personnel.

Despite the planned internally developed HF training, the AAIU determined it was appropriate to make a specific recommendation that:

Sander Geophysics should ensure that Human Factors training includes a case study on this event and specific information on confirmation bias, habituation, interruptions and distractions.

The AAIU were minded to recommend the preparation of an emergency checklist to cover such failures but having reflected on feedback from Transport Canada and the operator decided not to do so.

In Issue 4/2015 of TP 6980 – Canadian Aviation Service Difficulty Reports – Feedback an incident were a Beechcraft B1900D landed after a left-hand upper aft cowling was lost is discussed. 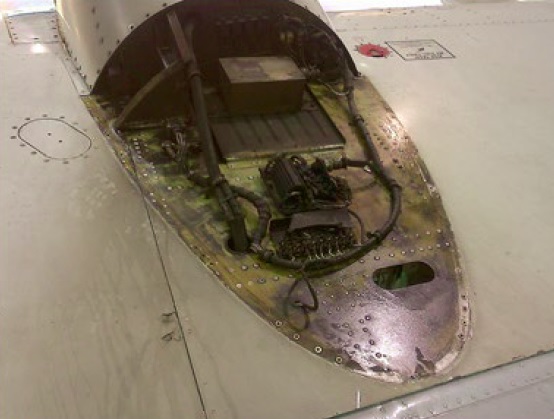 It was determined that the cowling was only put in place by hand and had not been secured with any of the required hardware prior to aeroplane departing for its first flight of the day.

Distractions can cause work to be left uncompleted. If work is to be left uncompleted, it should be flagged so that the aircraft won’t be dispatched in an un-airworthy condition. There have been a number of events on various Beech model aeroplanes with PT6 engines where the forward upper cowl was lost in flight due to an  incorrect installation.

Although this occurrence has not been subject to the same level of investigation, you will note similarities in possible cause and suggested controls.

After takeoff from London Heathrow Airport a vapour trail was seen streaming aft of the aircraft.

The flight crew diagnosed that the aircraft was probably leaking fuel from the centre wing fuel tank. They declared an emergency and ….after landing, the aircraft was met by the Airfield Fire and Rescue Service who reported some vapour emanating from the left landing gear but no apparent fuel leaks. The fuel leak was caused by fuel escaping through an open purge door inside the left main landing gear bay, on the rear spar of the centre wing tank. 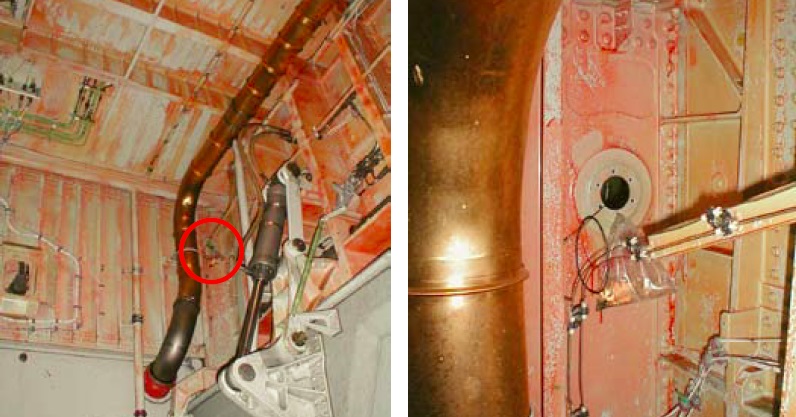 The purge door had been removed during base maintenance at the operator’s maintenance organisation in Cardiff, between 2 May and 10 May 2004, and had not been refitted prior to the aircraft’s return to service. The investigation identified the following causal factors:

Following the incident, significant safety action was taken by both the maintenance organisation and the aircraft manufacturer to address issues discovered during the investigation. The AAIB made five Safety Recommendations.

You may also find these earlier Aerossurance articles of interest:

UPDATE 27 May 2017: The US National Transportation Safety Board (NTSB) have reported on the case of an Air Methods Corp HEMS BK117 helicopter where the failure to secure the left vertical fin cowling Dzus fasteners resulted in its separation and subsequent contact with the tail rotor system during flight. 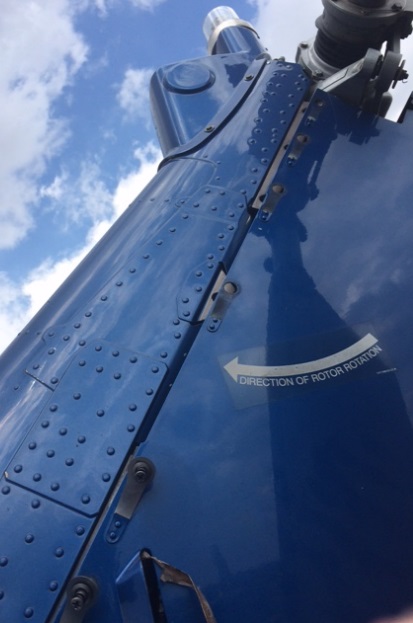 After landing from a patient transfer flight the pilot noticed that the left vertical fin cowling had partially separated and came in contact with a tail rotor blade. 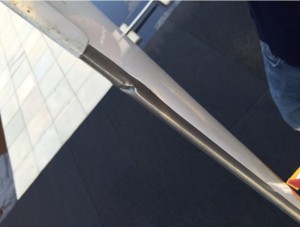