The US National Transportation Safety Board (NTSB) has determined that a National Airlines Boeing 747 Freighter N949CA that crashed on take-off on 29 April 2013 did so because the five armoured military vehicles (2x12t and 3x18t) on-board were inadequately restrained. 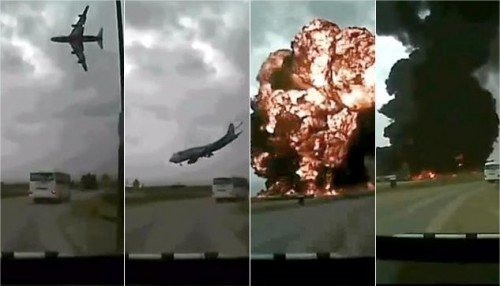 As the NTSB explain:

These vehicles were considered a special cargo load because they could not be placed in unit load devices (ULDs) and restrained…using the…main deck cargo handling system. Instead, the vehicles were secured to centerline-loaded floating pallets and restrained to the airplane’s main deck using tie-down straps. 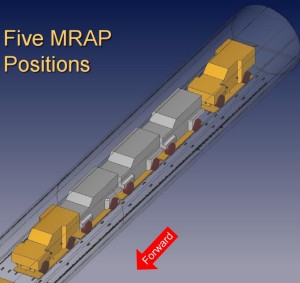 How the Five Vehicles Were Located in the B747F – Note the Close Spacing (Credit: NTSB)

The rearmost vehicle moved rearward into the rear pressure bulkhead, crippling two hydraulic systems and damaging horizontal stabilizer components.  This rendered the airplane uncontrollable. All seven crewmembers were killed in the accident on 29 April 2013 at Bagram, Kabul, Afghanistan.  The aircraft was on charter to the US Air Mobility Command.

As they describe in their press release, NTSB Finds Damage From Inadequately Secured Cargo Caused Boeing 747 Crash in Bagram, Afghanistan:

Contributing to the accident was the Federal Aviation Administration’s inadequate oversight of National Airlines’ (NAL’s) handling of special cargo loads, such as that being carried on the accident flight. The Boeing 747-400 freighter was carrying five mine-resistant ambush-protected (MRAP) vehicles. There was no evidence found to suggest that the airplane was brought down by an explosive device or hostile acts.

The investigation found that National Airlines’ cargo operations manual not only omitted critical information from Boeing and from the cargo handling system manufacturer about properly securing cargo, but it also contained incorrect restraining methods for special cargo loads.

The Board recommended that the FAA create a certification process for personnel responsible for the loading, restraint, and documentation of special cargo loads on transport-category airplanes. Other recommendations call on the FAA to improve its ability to inspect cargo aircraft operations, specifically those involving special cargo loads.

Three points that we thought noticeable during the Board Meeting and the staff presentations were: 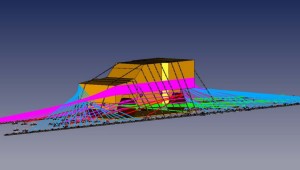 How Boeing Would Have Secured One Vehicle (Credit: via NTSB)

To view the findings, and recommendations, click on the following link: http://go.usa.gov/3fHTS or by looking in the public docket.

The National Transportation Safety Board determines that the probable cause of this accident was National Airlines’ inadequate procedures for restraining special cargo loads, which resulted in the loadmaster’s improper restraint of the cargo, which moved aft and damaged hydraulic systems Nos. 1 and 2 and horizontal stabilizer drive mechanism components, rendering the airplane uncontrollable. Contributing to the accident was the Federal Aviation Administration’s inadequate oversight of National Airlines’ handling of special cargo loads.

The NTSB have now made the presentations and opening / closing remarks available:

In response to an open National Transportation Safety Board (NTSB) recommendation (2016; A-15-014) and at the request of the Federal Aviation Administration’s (FAA’s) Aircraft Maintenance Division (ASF-300), a study was conducted to document the current rest and fatigue status of cargo load supervisors as well as collect information regarding the perceived responsibilities of load supervisors while performing regular duties.

A total of four organizations agreed to have researchers observe daily cargo operations and recruit participants for each of the three studies: (a) a general fatigue survey, (b) a 14-day field study, and (c) a twohour interview.

Among the CFT findings are that:

Other issues of concern identified…included a lack of documentation of the aircraft’s current cargo loading system (CLS). Due to the installation and removal of multiple STCs over time, the cargo configuration of some aircraft could not be determined. In some isolated cases, air carriers have developed procedures for aircraft loading that exceeds the structural design capability of the aircraft. Exceeding this capability can lead to catastrophic failure of the aircraft.

Recommended Action: Air carriers should review their WBM and cargo loading documents to validate adherence to the manufacturer’s FAA-approved WBM or STC WBM supplement for each aircraft on their Operations Specifications. The air carrier may contact the design approval holder to obtain the WBM.

UPDATE 13 July 2017:  A has returned a verdict in favor of the families of three of seven crew members.

The plaintiffs sued National Air Cargo, Inc., an affiliated company of National Airlines, which through the employees of its regional office in the Middle East, planned, loaded and restrained five Mine Resistant Armor Protected (“MRAP”) vehicles…

Trials in the cases for the remaining four crew members are expected to be set shortly.

A previous NTSB investigation into the loss of Fine Air Douglas DC-8-61 cargo aircraft N27UA on 7 August 1997 at Miami is also worth examination.  Safety issues discussed subsequently by the NTSB include the effects of improper cargo loading on aircraft performance and handling, operator oversight of cargo loading and training of cargo loading personnel, the loss of critical flight data recorder information, and FAA surveillance of cargo carrier operations.

​The National Transportation Safety Board determines that the probable cause of the accident, which resulted from the airplane being misloaded to produce a more aft center of gravity and a correspondingly incorrect stabilizer trim setting that precipitated an extreme pitch-up at rotation, was (1) the failure of Fine Air to exercise operational control over the cargo loading process; and (2) the failure of Aeromar to load the airplane as specified by Fine Air. Contributing to the accident was the failure of the Federal Aviation Administration (FAA) to adequately monitor Fine Air’s operational control responsibilities for cargo loading and the failure of the FAA to ensure that known cargo-related deficiencies were corrected at Fine Air.

Aerossurance has extensive aviation safety, operations, aviation contracting, assurance and accident analysis experience.  For aviation advice you can trust, contact us at: enquiries@aerossurance.com