The US National Transportation Safety Board (NTSB) investigation into a fatal accident to Rediske Air de Havilland DHC-3T Otter N93PC in Soldotna, Alaska on 7 July 2013, has determined it was caused by misloading. A passenger iPhone video of the aircraft’s take-off was recovered from the wreckage and analysed.  The full report can be found here. Shortly after take-off:

…the airplane’s angle of attack continually increased as the airplane’s airspeed decreased from about 68 mph to about 44 mph over a period of about 8.5 seconds. About 11 seconds after takeoff, airspeed and angle of attack reached values consistent with an aerodynamic stall. The airplane rolled right-wing-down and impacted the ground several seconds later.

The cabin was destroyed by the impact and a post-crash fire.  The pilot and nine passengers aboard the 16 seat aircraft were fatally injured. 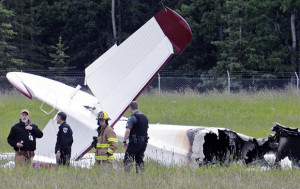 Before picking up the nine passengers, the pilot loaded the accident airplane at the operator’s base in Nikiski with cargo (food and supplies for the lodge). The operator of the lodge where the passengers were headed estimated the cargo weighed about 300 pounds (lbs) and that the passengers’ baggage weighed about 80 lbs. Estimates of the passengers’ weights were provided to the lodge operator in preparation for the trip, which totalled 1,350 lbs. The load manifest listed each of these weight estimates for a total weight of 1,730 lbs and did not contain any balance data. The cargo was not weighed, and the pilot did not document any weight and balance calculations nor was he required to do so. The weight of the cargo recovered from the crash site, and determination of the weight of cargo destroyed in the impact and post-crash fire, showed the cargo weight was about 418 pounds higher than the cargo weight stated on the load manifest, resulting in a center of gravity aft of the limits for the airplane.

Neither 14 CFR Part 135 (as 14 CFR 135.63(c) does not apply to single engined aircraft) nor the operator’s operations specifications required that aircraft weight and balance actually be documented. The NTSB determined the probable cause to be:

The operator’s failure to determine the actual cargo weight, leading to the loading and operation of the airplane outside of the weight and center of gravity limits contained in the airplane flight manual, which resulted in an aerodynamic stall. Contributing to the accident was the Federal Aviation Administration’s failure to require weight and balance documentation for each flight in 14 Code of Federal Regulations Part 135 single-engine operations.

This accident again demonstrated the investigative value of video footage and that small consumer devices can survive impacts and fires.

It also demonstrates the vital importance of correct loading and weight & balance.  Aerossurance has previously written about a misloaded Pilatus PC-12 were pitch control lost on take off resulting in a series of pitch oscillations and stall warnings, but fortuitously only damage to one wheel: Wait to Weight & Balance – Lessons from a Loss of Control. Loading issues also featured in this Canadian accident: Culture + Non Compliance + Mechanical Failures = DC3 Accident and this US accident Inadequately Secured Cargo Caused B747F Crash at Bagram, Afghanistan. Australian Transport Safety Bureau (ATSB) report Aircraft loading occurrences July 2003 to June 2010

UPDATE 11 August 2017: Deadly Combination of Misloading and a Somatogravic Illusion: Alaskan Otter  A night departure of a Otter in Alaska into a ‘back hole’ when outside of the weight and CG limits resulted in spatial disorientation, a stall and LOC-I.

UPDATE 9 February 2018: The Irish AAIU explain how during preparations for departure from Dublin of ATR72-212 EI-FAV on 23 July 2015 the passenger baggage was placed in the aft aircraft baggage hold instead of the forward baggage hold. “The aircraft departed with the Centre of Gravity outside approved loading limits. The aircraft subsequently landed at its destination where the loading error was discovered”.

UPDATE 21 March 2020: Alaskan AS350 CFIT With Unrestrained Cargo in Cabin

UPDATE 25 April 2020: Fatal R44 Loss of Control Accident: Overweight and Out of Balance

Aerossurance was pleased to sponsor the Chartered Institute of Ergonomics & Human Factors’ (CIEHF) Human Factors in Aviation Safety Conference that takes place at the Radison Blu Hotel, East Midlands Airport, 9-10 November 2015 and to then present and support the 2016 event.

Aerossurance has extensive air safety, operations, assurance, human factors and accident analysis experience.  For practical advice you can trust, contact us at: enquiries@aerossurance.com