The Transportation Safety Board of Canada (TSB) recently issued a report on the forced landing of a 1942 Douglas DC-3 C-GWIR after an engine failure on 19 August 2013. The Buffalo Airways aircraft was operating a scheduled passenger flight between Yellowknife and Hay River within the Northwest Territories. Buffalo Airways has been the subject of the TV series Ice Pilots NWT.

Moments after take-off a fire developed in the right engine.  The crew turned back to the airfield but the aircraft struck a stand of trees and made a wheels up landing south of the airfield 5 minutes later. Fortuitously the 3 crew and 21 passengers were uninjured. 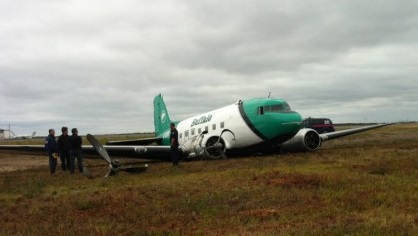 The TSB were not able to identify the source of the cylinder fatigue crack due to post failure damage and do not comment on adequacy of the maintenance programme.

Aerossurance has recently reported on another Canadian accident where a propulsion system malfunction resulted in an accident after, in that case, an inappropriate crew response. The difference in this accident was that inappropriate actions had occurred before the engine failure, in relation to aircraft loading and performance calculations (and the lack thereof). The TSB report that:

The company procedure for maintaining accurate weight and balance data on its fleet by using calculations was ineffective. Inconsistencies between the weight and balance report at the last weighing in 1990 with subsequent amendments did not reflect actual aircraft configuration… …a complete and accurate weight and balance report was not calculated prior to takeoff.  As such, the crew would not be able to determine accurately the aircraft’s performance capabilities during a normal takeoff. Additionally, the company did not have the capability to demonstrate how its aircraft could meet the CARs net take-off flight path (NTOFP) performance requirements, despite stating this requirement within its operations manual. This put the safety of flights at risk.

Using the applicable standard passenger weights as prescribed by the Company Operations Manual (COM), the data from the OFP and the actual cargo weight, the operational take-off weight for the occurrence flight was determined to have been 27 435 pounds, 1235 pounds over the [maximum certified take-off weight] MCTOW.

Not surprisingly, as demonstrated by an 1994 Australian DC-3 accident, in this overloaded condition, with powerplant malfunctions, climb performance was seriously degraded. Three months ago Aerossurance wrote about another loading related accident, involving a Pilatus PC-12: Wait to Weight & Balance – Lessons from a Loss of Control

Buffalo Airways had been required by Canadian regulations to have a Safety Management System since 2005, however the regulator, Transport Canada (TC), is reported to have only conducted their first SMS assessment at the operator in 2009. The TSB comment that:

SMSs are intended to promote the proactive management of risk by operators. While regulations identify the components and processes required of an SMS, the degree to which these will be effective depends on the safety culture of the organization into which they are introduced. As the collection of values and beliefs that drive individual behaviour, organizational safety culture will determine the extent to which the mandated processes and components are used. In particular, a safety culture that does not support a thriving SMS is unlikely to have effective processes for reporting hazards.

The term ‘safety culture’ was initially used in the report on the 1986 Chernobyl nuclear accident.  In many ways the TSB comment supports the assertion on the difference between SMS and safety culture in this article: Beyond SMS by Evans and Parker from May 2008. Unfortunately, according to the TSB, there were:

…indications that the organizational culture at Buffalo Airways was not supportive of a system that required the organization to take a proactive role in identifying hazards and reducing risks. The company’s response to deficiencies identified during TC surveillance activities demonstrated an adversarial relationship between the company and the regulator. The company refuted the regulatory basis of findings, questioned the competence of TC inspectors, and initially did not take responsibility for the issues identified. The overall picture that emerged from this investigation is of an organization that met the basic requirements of regulations and then only when pushed by the regulator.

In particular at when submitting corrective action plans (CAPs) for a 2011 audit:

…the operator took exception to multiple findings, requesting clarification as to the regulatory basis for the deficiencies identified by TC, and explicitly questioning the competence and motivation of TC inspectors.  TC rejected these initial CAPs noting that the CAP process was not the appropriate venue for “repeated diatribes against Transport Canada.”  Buffalo Airways revised the CAPs and they were accepted by TC. The picture presented by the TSB review was one of an operator at odds with the regulator.

No reasons are apparent to explain why this, of four audits in the three years prior to the accident, was fractious.  Nor is there any examination of the validity of the complaints.  Only limited details of this 2011 audit are included, but findings are described as relating to:

While a move towards SMS has great potential to enhance safety by encouraging operators to put in place a systemic approach to proactively manage safety, the regulator must also have assurances of compliance with existing regulations, particularly for operators that have demonstrated a reluctance to exceed minimum regulatory compliance. In order to assess regulatory compliance, and hence whether risks are sufficiently mitigated, inspectors must have appropriate processes and carry out detailed inspections of actual operating procedures and practices. The current approach to regulatory oversight, which focuses on an operator’s SMS processes almost to the exclusion of verifying compliance with the regulations, is at risk of failing to address unsafe practices and conditions. If TC does not adopt a balanced approach that combines inspections for compliance with audits of safety management processes, unsafe operating practices may not be identified, thereby increasing the risk of accidents.

At a time when performance based regulation is a major topic, this accident perhaps suggests that care must be taken to identify organisations whose culture and systems are not sufficiently mature. However, it is equally apparent that with hindsight bias it could be far too easy to reactively label a culture as weak after an accident based on limited evidence.  In the same way it is also very easy to identify non-compliances with the aid of insight from an accident.  In practice of course the real challenge is to identify and act on weak cultures and systems prior to accidents. Despite making an issue of regulation and culture, disappointingly no actions are reported to have been taken in these areas and no recommendations are made by the TSB. UPDATE 9 September 2015: This accident was used as an SMS case study at a European Aviation Safety Agency (EASA) Workshop in Cologne.  It was stated that EASA would address the lessons from this accident by:

UPDATE 25 September 2015: The airline had a further accident with a Curtis C-46 after another powerplant malfunction.

UPDATE 4 December 2015: In the case of Buffalo, it is reported that an October 2015 TC inspection turned up “deficiencies” in the airline’s operational and maintenance control systems.  Buffalo are currently chartering replacement aircraft and have until 30 December 2015 to appeal the suspension.

UPDATE 25 December 2015: Rather oddly a consultant employed by Buffalo has been interviewed by the media: Buffalo Airways owner agrees to step away as airline remains grounded and Inside Buffalo Airways Suspension: What’s happening?

UPDATE 4 January 2016: It is now claimed that the company is in the process of submitting “its final correction action plan” to TC: Buffalo Airways could resume commercial flights this week

UPDATE 31 December 2016: Having reinstated Buffalo’s AOC, during the year TC has imposed C$25k of fines on the company, one for a “maintenance violation’, 6% of all TC civil penalties.

We have also discussed other examples of possibly lax regulatory oversight in Canada and US:

Prof Sidney Dekker comments on the danger that a Safety Management System can become a “self-referential system”: a system that just exists for itself and is a sponge for data but one from which intelligence never emerges.  VIDEO UPDATE 13 November 2018: Inadequate Maintenance, An Engine Failure and Mishandling: Crash of a USAF WC-130H: investigators discuss a strong cultural overtone in this accident that killed 9. UPDATE 13 January 2019: Pathological to Generative. Moving up the Regulation Culture Ladder with Bruce.

Aerossurance has extensive experience in safety culture development, safety assurance, propulsion system reliability and accident analysis.  For aviation advice you can trust, contact us at: enquiries@aerossurance.com