King Air 100 Stalls on Take Off After Exposed to 14 Minutes of Snowfall: No De-Icing Applied (Island Air Express, C-GIAE)

On 23 February 2018, an Island Express Air, Beechcraft King Air B100, C-GIAE, departed Abbotsford, British Columbia on a day Instrument Flight Rules (IFR) flight to San Bernardino, California with a single pilot (the owner of the operator) and 9 passengers. According to the Transportation Safety Board of Canada (TSB) safety investigation report (issued 14 August 2019) snow had been falling during the flight planning and the aircraft had been kept within a hangar to protect it from the snow.  TSB explain that:

The pilot and passengers boarded the aircraft and, at 1150, the hangar door was opened and the aircraft was towed outside. At 1154, both engines were running. No de‑icing or anti-icing fluid was applied to the aircraft.

…the amount of snow estimated to have fallen on the aircraft from the time it exited the hangar until it entered the runway was about 4 to 5 mm.

At 1203, the aircraft taxied onto the snow-covered Runway 07 and continued with an immediate takeoff.

Approximately 4 to 5 seconds after takeoff, the pilot selected the landing gear control to the up position. As the gear retracted, the aircraft rolled approximately 30° to the left. To correct the uncommanded left bank, the pilot applied right aileron, and the aircraft returned to a near wings-level attitude. In order to make an immediate off-field emergency landing, the pilot retarded the power levers and then applied forward pressure on the control column to land the aircraft. The aircraft struck terrain between Runway 07 and Taxiway C. The aircraft slid across the snow-covered ground for approximately 760 feet before coming to rest in a raspberry patch located on the airport property. 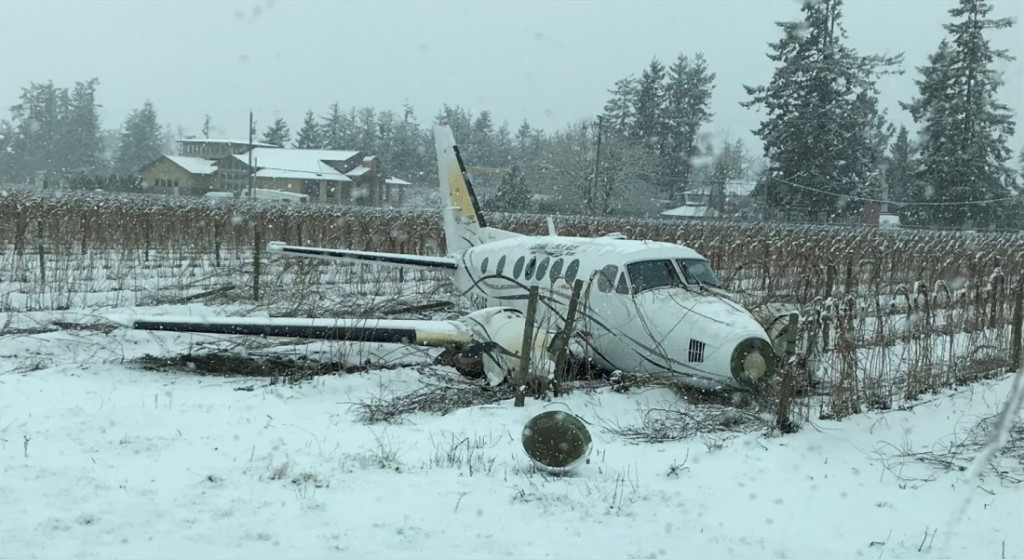 Five passengers and the pilot were seriously injured. The other 4 passengers received minor injuries.

Both occupants of the crew seats received serious head injuries (i.e., facial fractures and lacerations) and compression injuries (i.e., spinal fractures). The passenger seated in the right-hand crew seat was rendered unconscious and had to be carried out of the aircraft.

The flight path was reconstructed as follows: It is likely the aircraft stalled during the initial climb after the aircraft lost the benefit ground effect.

The aircraft was equipped with an ice protection systems and it had been activated.  Type I de-icing fluid was available but not used.  Type I fluids do not however offer any significant anti-icing holdover protection and so are  commonly used as part of a two-step de/anti-icing procedure when the final application of a Type II or Type IV fluid provides the required hold-over time.

According to the aviation weather report current at the time of the occurrence, the aircraft departed in moderate snowfall. However, according to internationally recognized de-icing and anti-icing fluid holdover guidelines, which were developed based on a more comprehensive understanding of the risks associated with ground icing, the snowfall intensity would be considered heavy snow.

The aircraft flight manual states that a plane that has been stored in a hangar should be treated with anti-icing solution, because snow falling on a relatively warm surface in ambient temperatures that are below freezing will tend to melt and then refreeze

The aircraft’s exterior surface is primarily aluminum, which has a high thermal conductivity and therefore cools quickly. Some aircraft surfaces will quickly cool to 0 °C when exiting warm hangars into sub-zero air, generally within a few minutes. Although the fuel tanks in the wings may have contained warm fuel, it has been established that warm fuel in the wings will not prevent all aircraft surfaces from reaching freezing levels.  In addition, several locations on the aircraft (e.g., leading edges, wingtips, ailerons, flaps, empennage) do not contain fuel and, therefore, would cool at different rates than parts of the aircraft that contain fuel.

Cooling tests were conducted at the TSB Engineering Laboratory with an exemplar aircraft component of typical lightweight aluminum, taken from indoor temperatures at 20 °C to outdoors at −5 °C. The initial cooling was rapid, as much as 10 °C per minute. As the temperature of the component dropped, the cooling rate slowed, and the component reached a temperature of 0 °C after about 7 minutes of exposure.

In the cooling tests, the first snowflakes that fell on the warm component melted into small water drops about 1 to 2 mm in size. As the surface quickly cooled, the melt rate decreased, and a mixture of water drops and partially melted flakes was observed.

As the surface reached 0 °C, ice crystals began to grow from the water drops. As snowfall continued, the falling flakes bonded with the partially melted and re-frozen precipitation layer, creating a very rough surface that protruded up to 3 mm and was difficult to see on the white paint. The contamination layer was resistant to attempts to disturb it with airflow or rapid acceleration, suggesting that it would remain bonded to the surface during a takeoff. Some of the contamination seen on the wreckage after the crash demonstrated this melt/refreeze process, and likely existed to some extent before the crash. Although icing will increase drag, the increase in drag will not be significant during the initial stages of the takeoff roll. As a result, the effects of ground icing may not be noticeable on the aircraft’s initial acceleration, unless the accumulation of ice has significantly increased the aircraft’s weight. However, as the aircraft accelerates, even virtually imperceptible amounts of ice on a wing’s upper surface can significantly reduce performance and make it difficult to rotate and climb away safely.

The investigation identified a number of errors on the OFP [operational flight plan] relating to weight and balance. Most notably, although the aircraft had 549 lbs of fuel in the auxiliary tanks, 0 was entered on the OFP. There were no scales in the Island Express hangar and several of the occupant weights, including those of the pilot and the passenger in the right-hand crew seat, were incorrect. In addition, the distribution of these passenger weights on the OFP did not reflect the actual seats occupied during the occurrence flight.

While the OFP indicated that the aircraft was at 11,200 lbs it was actually at 12,000 lbs (200 lbs over the maximum allowable gross take-off mass).  The aircraft’s CG was near the aft limit.

The TSB comment that the maximum allowable bagged weight is 410 lbs but 480 lbs had been loaded.  Passengers, family members of the pilot, had loaded baggage without supervision. The TSB were also unable to establish if the cargo net was an approved restraint system:

While several passenger seats detached  as impact forces experienced by each passenger ranged from 8.5g to 14.3g, the seats, designed to meet the 7g requirement of FAA Technical Standard Order (TSO) 39a, performed as expected.

On the morning of the occurrence, [a] telephone conversations with Abbotsford air traffic control indicated that the pilot was concerned about the heavy snow and the potential implications of any delays getting airborne. Having recognized these issues, the pilot did not alter the plan even though the aircraft had spent 14 minutes in heavy snow at temperatures that presented a significant risk of ground icing. The pilot’s decision making was affected by continuation bias, which resulted in the pilot attempting a takeoff with an aircraft contaminated with ice and snow adhering to its critical surfaces.

Continuation bias is best described as “the unconscious cognitive bias to continue with the original plan in spite of changing conditions”or “a deep-rooted tendency of individuals to continue their original plan of action even when changing circumstances require a new plan.”Once a plan is made and committed to, it becomes increasingly difficult for stimuli or conditions in the environment to be recognized as necessitating a change to the plan. Often, as workload increases, the stimuli or conditions will appear obvious to people external to the situation; however, it can be very difficult for a pilot caught up in the plan to recognize the saliency of the cues and the need to alter the plan.

When continuation bias interferes with the pilot’s ability to detect important cues, or if the pilot fails to recognize the implications of those cues, breakdowns in situational awareness (SA) occur.  These breakdowns in SA can result in non-optimal decisions being made, which could compromise safety.

As a result of the difference in meaning of snowfall intensity between aviation weather reports and holdover time guidelines, it is highly likely that pilots will continue to underestimate the significance of the ground icing risk. If pilots rely only on the snowfall intensity reported in aviation routine weather reports or automated terminal information service broadcasts, they will not correctly determine de-icing and anti-icing holdover times, increasing the risk of aircraft accidents.

Island Express Air operated a fleet of 10 (from Piper PA-28s to the KA100) aircraft under Canadian Aviation Regulation (CAR) Subpart 703 (Air Taxi) and Subpart 702 (Aerial Work).  The company did not have a Safety Management System (SMS), nor was it one required by regulation in Canada for such operations.

Transport Canada (TC) had audited the company is December 2017 but only communicated their findings on 7 February 2018, a few weeks before the accident.  According to the letter, TC’s audit “revealed wide-ranging deficiencies in Island Express’s equipment, personnel training, and operational processes, which have resulted in significant non-compliant activity.”

Island Express was given an opportunity to respond however, on 21 February 2018, two days before the accident, Island Express was issued a Notice of Suspension, but only effective 28 March 2018.  TSB explain that:

There has been a change of ownership at Island Express since the accident, along with a new accountable executive, a new operations manager, and a new person responsible for maintenance.  On 26 June 2018, Island Express’s operating certificate was reinstated after the company underwent a recertification process by TC.

Aerossurance has previously written the following (many of which involve accidents in Canada):