The Transport Safety Board of Canada (TSB) has finally issued their report into a fuel exhaustion accident involving Beechcraft King Air 100 (BE10)  C-GJSU, operated by Aviation Flycie Inc in Quebec on 10 June 2013.  This accident highlights important human factors, competence and regulatory oversight issues.

The aircraft was extensively damaged, and the 4 occupants sustained minor injuries. The flight was to check the rudder trim indicator and investigate a potential synchronisation problem between autopilot and the GPS.  The aircraft …

…took off from the Montréal/St-Hubert Airport, Quebec, on a local flight under visual flight rules with 1 pilot and 3 passengers on board. The aircraft struck the ground 30 feet short of the selected field and slid on its belly 120 feet before coming to a stop perpendicular to the approach path. At the time of the accident, Aviation Flycie Inc. was a recently formed company. Its owners filed a statement of intent with TC in August 2012 to operate a commercial air service.

On 26 March 2013 [less than 3 months before the accident], Aviation Flycie Inc. commenced business under CARs Subpart 703 using a single BE10 aircraft. The chief pilot was the company’s only pilot-in-command, and had trained the PRM [person responsible for maintenance] as co-pilot before the company began flight operations. Therefore, when commercial flights were first conducted, the company had 3 employees in operations and a co-founder in sales and administration. A second co-pilot was hired approximately 2 weeks later.

They explain that at departure…

…the wing tanks were empty, and each of the nacelle tanks contained approximately 130 pounds of fuel. Although the gauge indicator needles were showing slightly more than ¼ tank of fuel in each nacelle tank, the needles were positioned at the midpoint of the dial because of the non-linear graduation scale of the gauges.

Seeing the needle at the midpoint of the dial could have led the pilot to conclude that the tanks were half full.

Based on these gauge characteristics, it was hypothesized that the pilot might have established a false equivalence between the visual position of the needle and the total quantity of fuel in the tanks. However, given that the sum of 2 half-full nacelle tanks would have been about 382 pounds of fuel and the pilot estimated that 580 pounds remained, that hypothesis was ruled out.

A second hypothesis examined whether a combination of work habit rules and errors might have led to the pilot’s misreading of the fuel gauges.

Effectively in this second hypothesis, which the TSB believe most likely, the pilot read the nacelle tank gauges positions but applied those to the wing tank quantity.  We note that the unusual circumstances of a check flight with the wing tanks empty may have increased the potential for error.

The TSB go on:

During the flight, the pilot did not monitor the fuel gauges and, when returning to the airport, decided to extend the flight to practise a simulated instrument landing approach, without noticing there was insufficient fuel to complete it.

Later, after the first engine flamed out:

The pilot continued flying toward Montréal/St-Hubert Airport (CYHU), Quebec, despite having advised air traffic control of the intention to divert to the St-Mathieu-de-Beloeil Airport (CSB3), Quebec, and without communicating the emergency. The pilot’s decision to lower the landing gear while the aircraft was still at 1600 feet above sea level further increased the drag, reducing the aircraft’s gliding range. As a result, the aircraft was not able to reach the runway at St-Mathieu-de-Beloeil Airport (CSB3), Quebec.

In not declaring the aircraft’s emergency situation to ATC, the pilot was deprived of assistance that could have lightened the workload in the cockpit.

The investigation found the pilot had a history of performance that did not meet expected standards to act as pilot-in-command for that aircraft type. Despite a marginal performance during the check flight, the pilot had successfully passed a pilot proficiency check, and TC had approved the individual’s appointment to the position of chief pilot.

…performance for former employers had been below the standards set by those employers in the vast majority of cases, for reasons that included: non-compliance with company policies, laxity in carrying out established procedures, and general weakness in carrying out tasks required while in flight.

Neither the operator nor Transport Canada (when reviewing the Chief Pilot application) had contacted the individual’s past employers.  The pilot had logged a total of 4200 flying hours, but on examination TSB queried whether some was valid flying time.

A review of the company’s records revealed that 26 of the 41 commercial flights it had carried out (63%) had been non-compliant with the COM [Company Operations Manual]. Irregularities were noted in areas involving training of co-pilots and their assignment to commercial flights, weight-and-balance calculations, and planning and management of fuel on board.

In addition, the investigation revealed that the person responsible for maintenance (PRM), a new co-pilot on the company’s BE10, had no previous experience in maintenance or in air taxi flight operations. TC had also approved the appointment of the PRM.

The TSB determined that TC’s appointment approval process was not effective and that, once the appointments had been approved, the management team’s inability to perform the duties and responsibilities was not grounds for TC to revoke them.

TC had recognised weaknesses with the operator and planned regular oversight visits.  The first was due 18 June 2013.

We have commented previously on TSB reports that have raised some similar issues:

This accident yet again demonstrates that for organisation’s planning to place contracts for aviation services, intelligent contracting and appropriate, effective assurance both before and after contract award is essential.  This is especially important when considering using new and or small operators with limited organisational capabilities and immature (or non existent) safety management systems.  Of course the best option is to always to select competent and mature suppliers!

It also shows that an expectation of thorough regulation and a cautious and prudent regulator may not be the case.

Earlier in the year the US National Transportation Safety Board (NTSB) has reported on an serious incident that involved Embraer EMB-110P1 Bandeirante, N116WA, operated by Wiggins Airways on a cargo flight on 21 May 2014 from Manchester International Airport, NH to Burlington International Airport, VT.  In that case, which we have examined in detail previously, the aircraft made an emergency landing on a small GA airstrip.  The pilot, who had been allocated that flight at late notice, was potentially was mislead by confirmation bias and saw what he expected to see (i.e. that the aircraft had been left fuelled).  There was however no mention of checking the aircraft technical log and associated the fuel uplift entries, another defence.

In 2000, the Bureau d’Enquêtes et d’Analyses pour la sécurité de l’aviation civile (BEA) (Bureau of Investigation and Analysis for Civil Aviation Safety) of France carried out a study of occurrences involving fuel exhaustion between 1991 and 2000 in general aviation.

The BEA produced a fault tree: 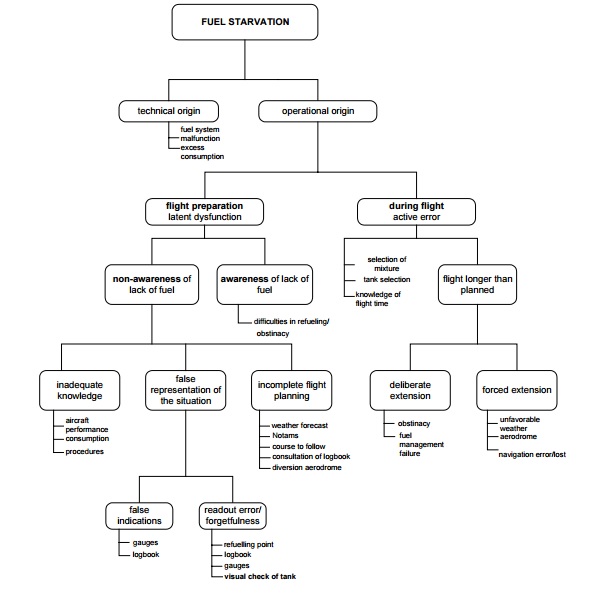 The TSB comment that the BEA study found that the contributing factors included:

UPDATE 24 June 2017: the US National Transportation Safety Board (NTSB) has reported on an landing accident that occurred after an unstabalised approach that followed a diversion due to a fuel shortage of Cessna Citation 500 N332SE on 4 December 2016: 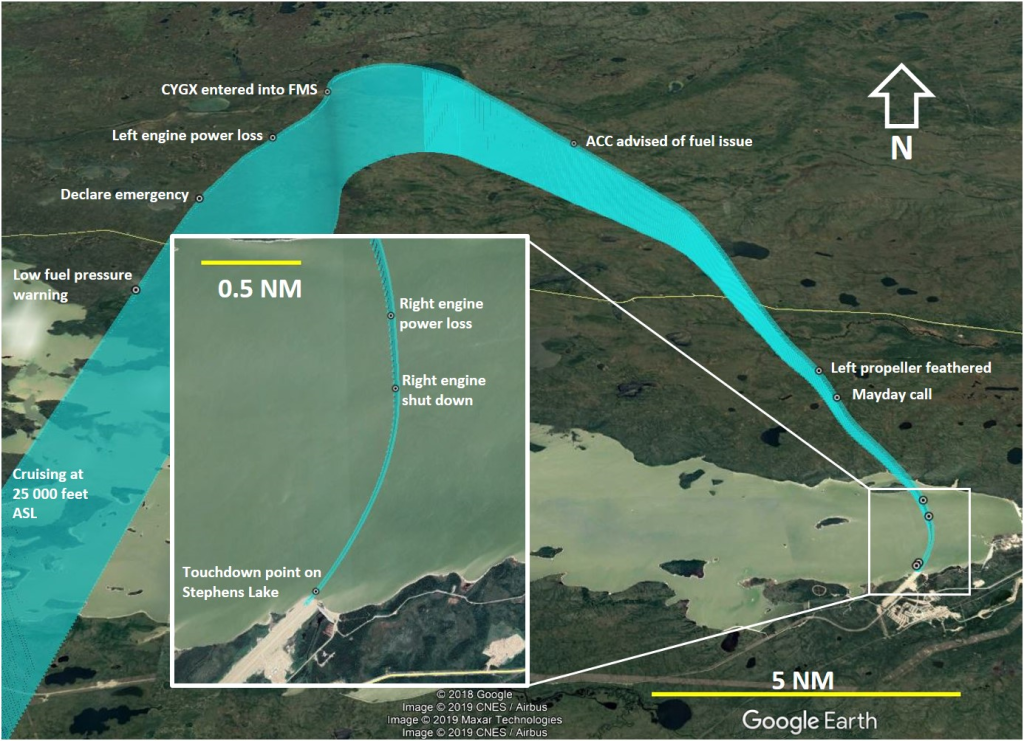