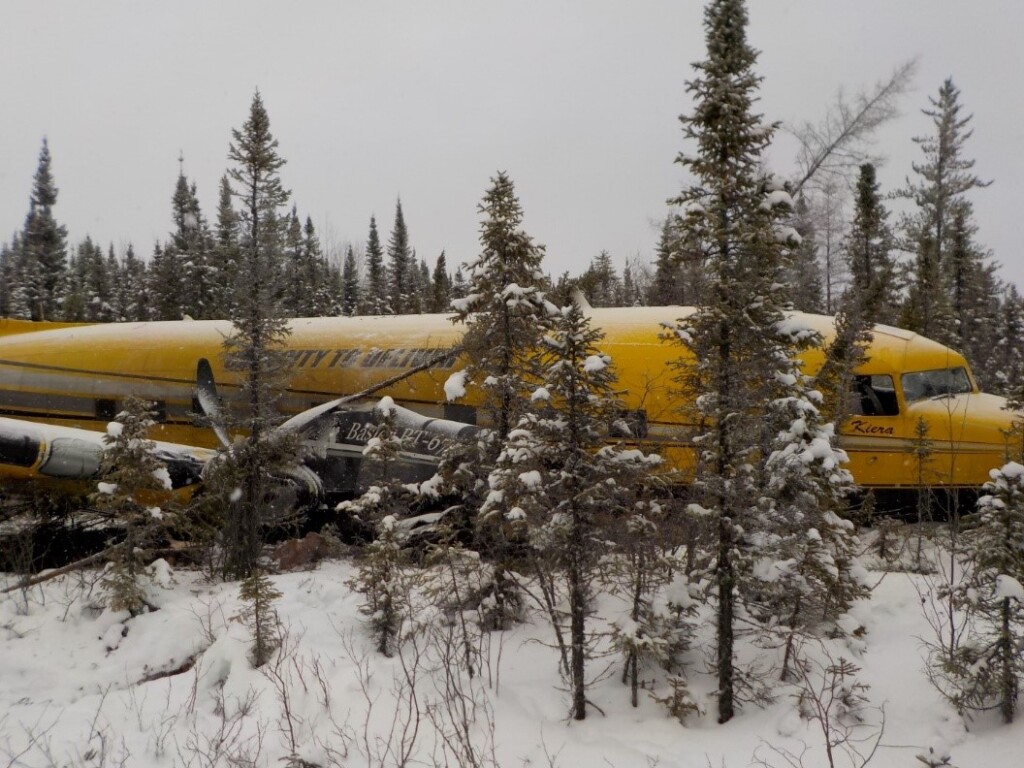 The Transportation Safety Board of Canada (TSB) explain in their safety investigation report, issued on 4 August 2022, that when the aircraft commander checked the weather at 0700 Local Time and instrument meteorological conditions (IMC) were reported.

The flight departed CYRL under visual flight rules (VFR) at 0800 The reported weather at the time was broken ceiling at 1200 feet AGL and an overcast layer based at 2000 feet AGL.

Shortly after takeoff, the aircraft entered, and climbed above, the cloud layers before reaching the planned cruising altitude, which was not in accordance with the applicable regulations for VFR flights.

At the Top of Decent the crew obtained the 0800 weather report for CZMD.  This “remained generally unchanged” from the 0700 report.  The crew…

…elected to carry out a visual approach to Runway 10. The captain initiated a descent through the cloud layers by reference to the flight instruments.

Once the aircraft broke out of cloud at very low level, the aircraft was not in a position to continue with the planned visual approach.

Rather than a go-around:

The captain made low-level manoeuvres in an attempt to land, flying a large 360° turn, as low as 100 feet AGL (i.e. about 400 feet below the required minimum altitude), and then flew a manoeuvre similar to a left-hand circuit, which brought the aircraft within close proximity to a significant obstacle (a 150-foot tall tower), in meteorological conditions below the VFR minimum requirements. 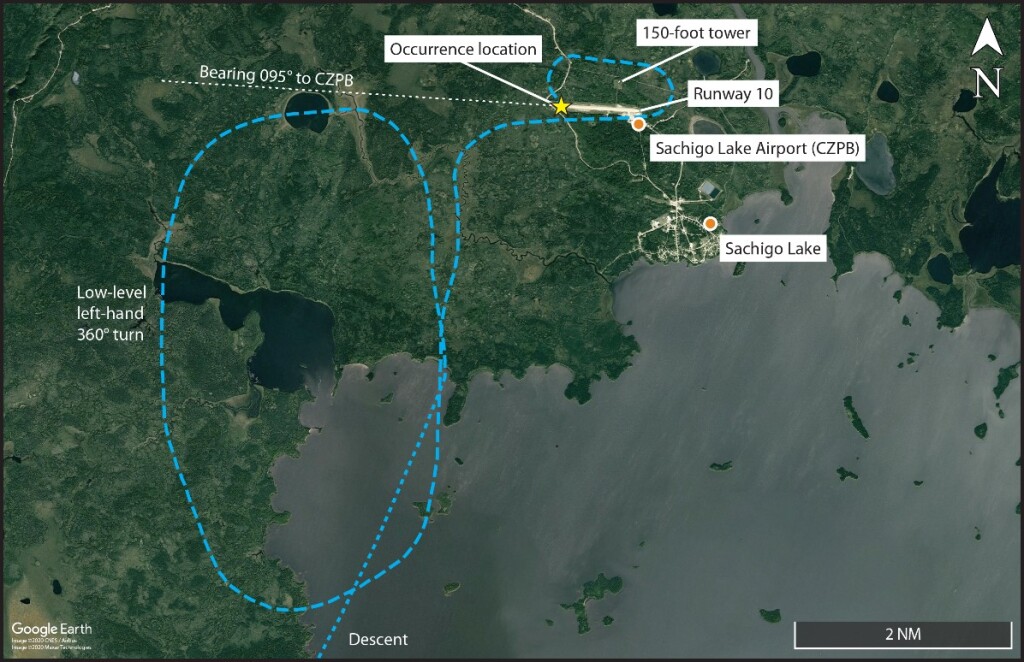 Given that the captain had not briefed the first officer, the latter was unaware of the captain’s intentions and began calling out airspeed and altitudes.

The aircraft slid 350 feet southward along the ground before it came to a rest on a southwesterly heading.

The ELT activated but as the antenna broke off the signal was not detected.

The investigators noted that…

…during the 2 months before the occurrence, all the flights conducted by the captain had been in accordance with VFR. However, for more than 10% of the flights, the weather at destination was reported to be conducive to IMC. Additionally, approximately 35% of the flights were conducted in weather where the pilots would have lost visual reference to the ground at some point during the flight.

It was also determined that the FO had previously conducted VFR flights in IMC with other captains at North Star Air and that the FO was comfortable with the occurrence flight operating under VFR, believing that it was acceptable under the regulations.

Both pilots were actually IFR-rated and the flight could have been conducted under IFR.  The investigators note that…

…from the time the captain decided to conduct the large 360° turn until shortly before landing, the FO was unaware of the aircraft’s position or the captain’s plan. At no time did the FO attempt, nor feel the need, to assert himself even though he was unaware of the plan and the aircraft was being visually manoeuvred at very low altitudes in IMC. Instead of seeking additional information (rebuilding situational awareness) from the more experienced captain, or proposing a different course of action, the FO began calling altitudes and airspeeds.

When the captain initiated the 360° turn, he did not brief his intended course of action nor actively seek out the FO’s opinion to ensure that they had a shared mental model of the situation.

…the captain, who had extensive experience on the aircraft and in that role, adopted a single-pilot mindset for the rest of the flight.

The captain likely experienced attentional narrowing while carrying out a high-workload visual approach at very low altitude in IMC. This most likely resulted in an inadvertent but controlled descent that was not detected until the aircraft collided with terrain.

The investigation revealed that the result-oriented subculture of some North Star Air’s DC3-TP67 pilots, which emphasized mission completion over regulatory compliance, resulted in VFR flights, such as the occurrence flight, being conducted in IMC.

…had a history of conducting VFR flights in IMC.

The decision to depart on, and continue, a VFR flight in IMC was influenced by a distorted perception of risk resulting from successful past experience in similar situations.

…the company structure was such that there was no operational management presence and no day-to-day direct pilot supervision of DC3-TP67 flight operations and flights crews at the company’s remote bases, nor is it required by regulation.

The absence of direct supervision meant that company pilots had considerable latitude when it came to making operational weather-related decisions.

Over time, a culture had developed of operating below weather minima that went unknown to the airline management. However:

In December 2017, TC informed North Star Air that it had received allegations related to company DC3-TP67 aircraft operated on multiple occasions under VFR in IMC. TC provided the information about the allegations to the company for its internal investigation.

In response, the operations manager only communicated reminders to their DC3-TP67 aircraft commanders verbally that they should abide by the regulations.

An SMS hazard report was created and entered into North Star Air’s SMS database. However, the SMS did not identify the underlying factors that led to the reported instances of company aircraft operating VFR flights into IMC and the company did not take any additional measures to monitor its DC3-TP67 operation…

TC also failed to follow up the issue.  Additionally…

…TC’s approach to surveillance resulted in North Star Air’s SMS being approved even though several elements were not fully implemented.

With an apparent focus on generating SMS ‘shelfware’:

The consulting firm’s report indicated that North Star Air needed to review its SMS policies against the established regulatory expectations and that all procedures should be moved into a separate manual, making 2 manuals: 1 manual for SMS policies and 1 for SMS procedures.

While the airline did recruit more safety personnel (though no detail is included by TSB) the task of re-writing the manual….went to the consultants who suggested it…  In other words: self-licking shelfware development.

Not surprisingly the consultant’s shelfware did not seem to improved the effectiveness of the SMS. Looking at SMS records from 2019, TSB investigations revealed:

TSB don’t comment on why their report on the prior June 2019 accident did not discuss the North Star Air SMS.

The company also excluded first officers (FOs) from some safety discussions, like the expectations communicated following the 2017 allegations of VFR flights in IMC.

As a result, the FOs had not received a clear message from company management that operating under those conditions was prohibited, and what actions to follow if those conditions were encountered during a flight.