The German accident investigation agency, the BFU, have recent published their report into the fatal Controlled Flight Into Terrain (CFIT) of Cessna 501 Citation I/SP N452TS on 12 January 2014.  During the flight from Shoreham, UK, to Trier-Fohren, the privately owned, US registered business jet collided in fog with a trees and an electricity pylon during a VFR approach.  It impacted the ground about 2 NM from the threshold of runway 22 at Trier-Fohren.  The four occupants were all killed. 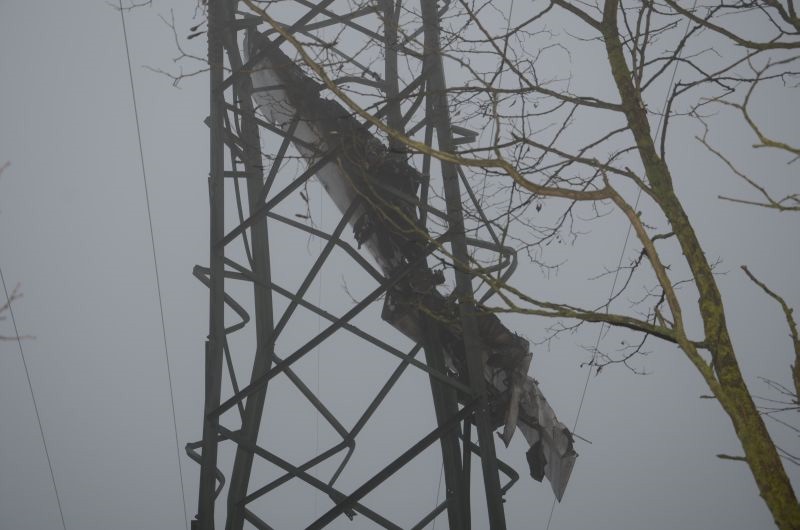 The crew had chosen to press on under Visual Flight Rules (VFR) in poor visibility, is believed to made a VNAV selection error and there are reported to have been ‘tensions’ amongst the crew, as the Pilot in Command (PIC) allegedly wanted to terminate the co-pilot on return to Germany.

The take-off from Shoreham had been brought forward by about 4 hours, for reasons the BFU were unable to determine. The Commander did have a discussion with the Flugleiter (the person required under German regulation to provide aerodrome information service to pilots at uncontrolled aerodromes) at the Trier-Fohren airfield on the morning of the accident at c1010 hrs.

During the call the arrival of the airplane had been announced for 1230 hrs. The Flugleiter had informed the PIC about the severe fog prevailing at the airfield. He had also told him that, if at all, he expected visibility would increase after 1330 or 1400 hrs. After the phone conversation the Flugleiter assumed, that the airplane would fly to another airport.

Weather was adequate at other local airports and family members of the occupants expected them to fly to an alternate airfield. While contracted flight planning information had been accessed the day before:

…on the day of the accident, prior to departure, neither of the pilots accessed the flight plan data with the prevailing weather information on the server of the service provider. The reasons could not be determined. The statements of the handling agent and the video recordings at the aerodrome of departure did not indicate that either of the pilots had accessed any weather data prior to take-off.

The recordings of the radio communications show that at the beginning of the flight the co-pilot conducted them, including the initial contact with Langen Radar approximately 14 minutes prior to the accident.

The PIC then acknowledged the clearance the controller issued about five minutes later to fly to the destination airport and descent to 5,000 ft AMSL. He requested the controller to issue the change of flight rules clearance with the words: “… standing by for cancelling IFR”. It could not be determined at what point the decision was made to fly to Trier-Fohren Airfield after all. The BFU is of the opinion, that at the time of the PIC’s request the decision had already been made because for an approach to Luxembourg Airport or FrankfurtHahn Airport a change of flight rules from IFR to VFR would not have been necessary.

… a CVR or FDR the options of the investigation were limited. Thus motivation, decision making process, and cooperation of the two pilots cannot be clearly understood.

They also say that:

…not at any time did the crew enquire about the prevailing weather conditions in TrierFohren, Frankfurt-Hahn or Luxembourg. The BFU does not understand why the pilots never established radio contact with Trier-Fohren Airfield. Therefore, they did not have any information regarding the prevailing weather conditions, the runway in use, or the status of the runway lights.

The BFU go on that:

Beginning the descent 6.7 NM (in 2,800 ft AMSL, i.e. 2,134 ft above the threshold) prior to the runway threshold corresponds with the correct distance for a 3° approach. The BFU is of the opinion that, due to their IFR experience, both pilots were familiar with the vertical profile of a 3° approach and its commensurate flight parameters since they had often applied it, especially during IFR approaches. …the crew had probably selected the descent profile with the VNAV function of the GPS. The pilot then piloted manually towards the selected altitude. Due to the great experience of the PIC with aircraft types, which are similar in approach speed to the Cessna 501 – the same is true for the co-pilot he knew that at a ground speed of 140 kt the airplane was to be flown with a rate of descent of 700 ft/min.

The analysis of the radar data shows..that …at the beginning of the final approach the rate of descent had an average of 1,400 ft/min and therefore more than twice as much as for a 3° approach. The BFU is of the opinion that the pilot had intentionally engaged and maintained a rate of descent of approximately 1,400 ft/min. It is highly likely that an erroneous selection of the target altitude with 0 ft (sea level) instead of the real aerodrome elevation (666 ft AMSL) was the reason. At the time of the accident, at Trier-Fohren Airfield the weather conditions made a VFR approach impossible. The Flugleiter stated that at the time of the accident the PAPI for landing direction 04 had been in operation. The wind came from 050°. The pilots approached the airfield from the direction to runway 22.

Witnesses confirm that “in the area of the accident site low clouds and fog prevailed” and “the aircraft flew very low in south-western direction and then pulled up shortly before reaching the slope by increasing power”. 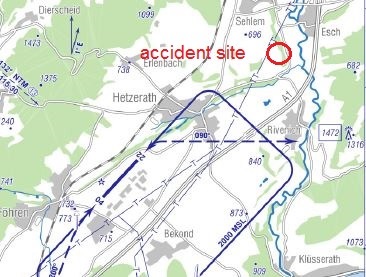 The BFU found that the initial contact was with trees.

Based on the height differences of the subsequent points of contact, the aircraft had a steep climb attitude and a left bank angle when it [subsequently] collided with the [electricity] power pole. 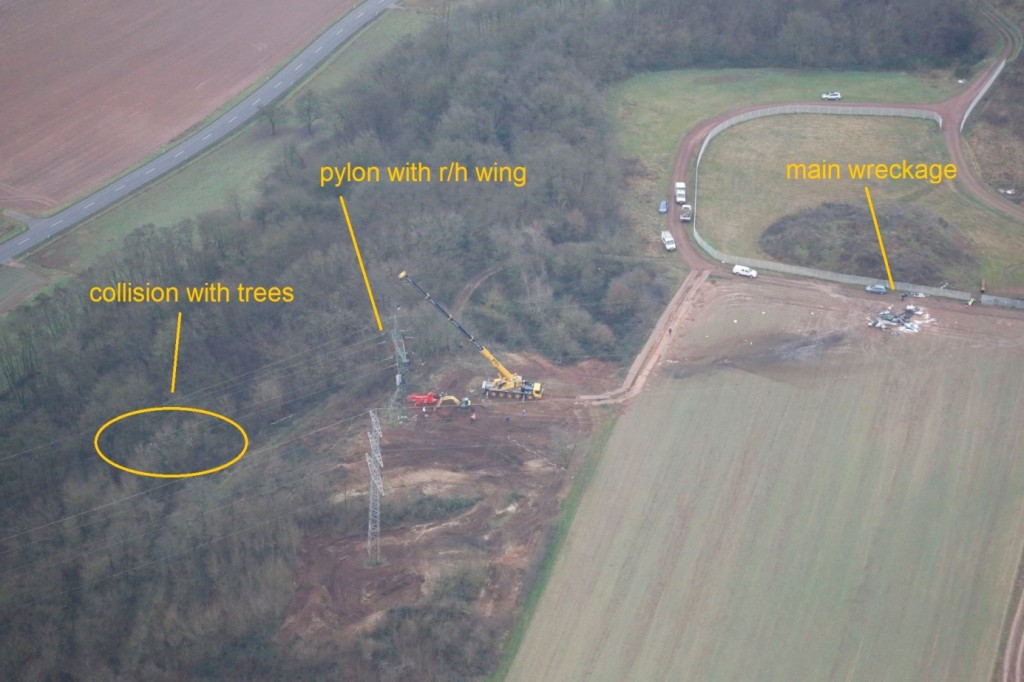 The right wing hanging in the pole clearly documents the bank angle of approximately 60°. The positions of the landing gear and the flaps show that the aircraft had been configured for landing. 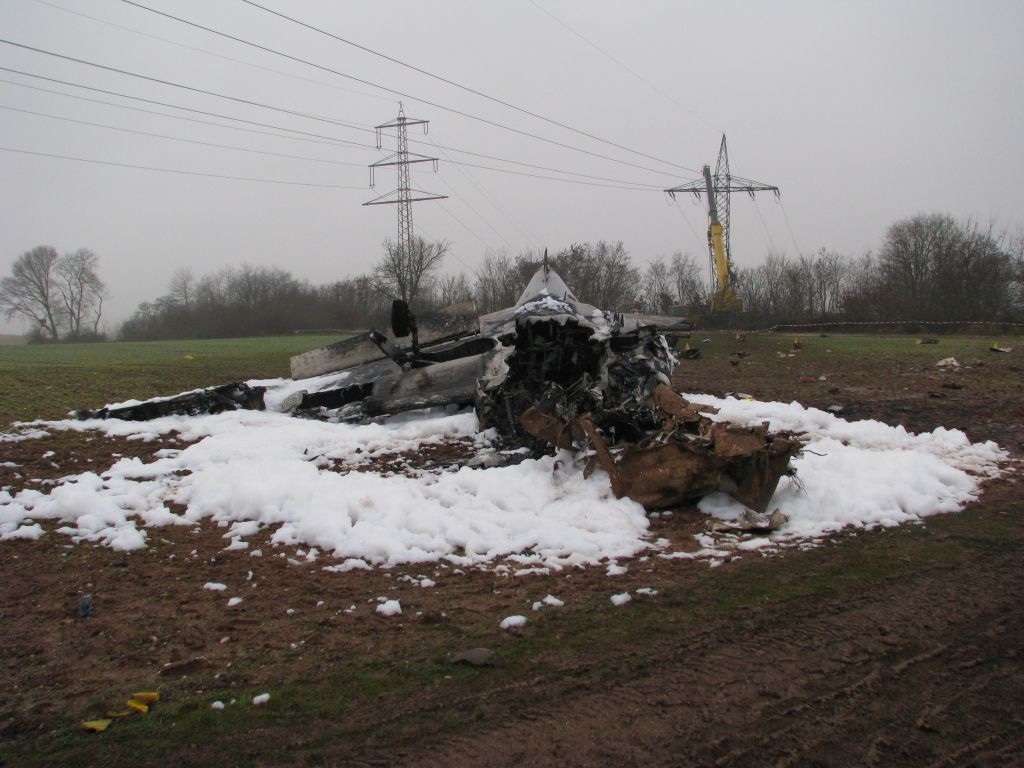 During the collision with the power pole the airplane caught fire and then crashed upside-down.

Therefore it can be assumed that the crew suddenly had the ground in sight, realised the steep slope right in front of them, and then initiated the avoidance manoeuvre in form of a steep climb with large bank angle.

In the past the company had chartered airplanes for their non-public company flights. Then they decided to buy a Cessna 501 and establish their own non-public company flight operations. Since mid-February 2013 they had been operating the aircraft. Witnesses stated that the airplane had been used for non-public company flights as well as for trips of the family of the company owner. At the time of the accident six pilots were either deployed as PICs or co-pilots; one only as co-pilot. The flight operations had been conducted for about one year and not yet been ruled by binding Standard Operating Procedures (SOP). Therefore, the respective PIC was left with the estimation of risks.  Flight operations post holders had not been designated. A high degree of safety should be reached with the conceptual fundamental decision of the airplane owner to have the non-public company flight operations be conducted with two pilots even though the airplane was certified for single-pilot operation. The BFU is of the opinion, that this decision was correct in terms of flight safety, but implementation of the concept was inconsistent. An example was the co-pilot who did not receive the funding for acquisition of the commensurate licence and type rating due to reasons of costs. On 25 August 2016 Part NCC of Commission Regulation (EC) No 965/2012 (Air Ops) for non-commercial flights with technically complicated powered aircraft comes into force. These stipulations will also apply for non-public company flights and include requirements for the organisation, risk management, and procedures. Therefore, the BFU refrains from issuing safety recommendations regarding this matter.

The BFU also say that:

…interviews of other pilots working for the company and the statements of relatives of the passenger and company owner did not determine [any] clear indications that would prove he pressured the pilots.

Crew Relationship: The PIC Wished to ‘Terminate’ the Co-Pilot’s Employment

According to the BFU:

The pilots interviewed by the BFU described the personality of the PIC as dominant and rather assured of himself; the co-pilot as reticent, level-headed, and cooperative. The witnesses’ statements indicate a distinct authority gradient between PIC and copilot, as well as a very charged relationship between the two. This is especially indicated by the statements, that he wanted to have the working relationship with the co-pilot terminated after they had had some arguments and his low opinion of the copilot. Another pilot, who was also working for the same company, told the BFU that the PIC and the co-pilot had known each other from their mutual time working for another operator. [However] during the weekend there had been a dispute between the two pilots. The PIC had voiced his intention that after their return from Great Britain he would have the working relationship with the co-pilot terminated. A statement of the PIC’s wife gives similar information. She said that her husband had been displeased with the work of the co-pilot and had assessed his skills and proficiency as low.

Good Crew Resource Management (CRM) is a safety mechanism. One requirement for CRM is the skill of a PIC to motivate a crew member to be a good team player. In order for this to work, a good atmosphere of mutual appreciation between pilots is necessary which would, for example, encourage a co-pilot to share his/her observations and possible concerns. In addition, good teamwork in the cockpit also includes: the other person should be involved in the decision making process, the tasks should be distributed reasonably, and mutual support and supervision, e. g. monitoring or cross checks, should prevail. The BFU is of the opinion, that the course of events shows the application of crew resource management principles was insufficient. The BFU is of the opinion that the different personality traits of the two pilots and particularly the PIC’s low appreciation of the co-pilot probably negatively influenced the working relationship in regards to CRM principles. The fact that the copilot helped during re-fuelling, loading, and take-off, conducted radio communications during take-off, and established radio contact with Langen Radar shows that a minimum of cooperation occurred between the pilots. The BFU is convinced that the cooperation during the accident flight, especially during the approach, could not have been good in regard to CRM. It is questionable whether the co-pilot had been involved in the decision making process and planning of the approach.

The airplane was equipped with TAWS. If functioning properly, the TAWS would have issued an acoustic warning “Five Hundred” in an altitude of 500 ft AGL and later a caution “Terrain” and a warning “Pull Up”. Due to the degree of destruction of the unit and the fact, that the airplane was not equipped with a CVR, a precise analysis was not possible.

The accident was due to the following: