On 9 July 2018 Royal Air Maroc Express ATR 72-600 CN-COH struck the surface of the Mediterranean during an approach to Al Hoceima, Morocco.  The aircraft was able to climb away and made a safe landing at Nador. 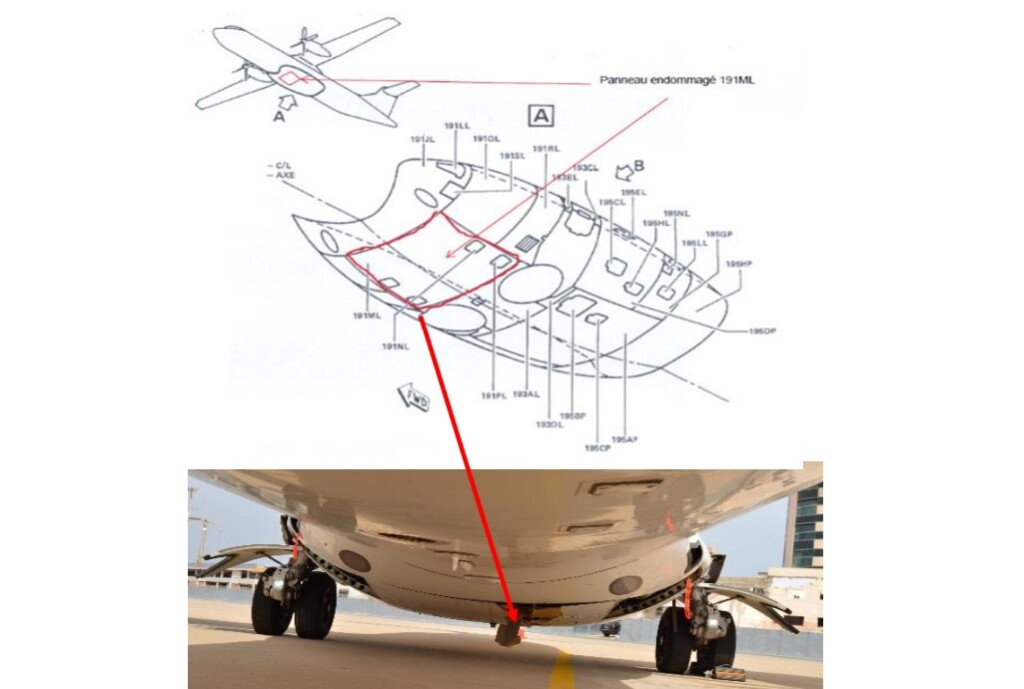 The Morocco BEA issued their safety investigation report (in French only) on 12 July 2020.  They explain that the aircraft had been operating Casablanca-Al Hoceima-Tangier-Al Hoceima-Casablanca.  The 61 year old Aircraft Commander had recently converted to the ATR72 from the Boeing 737NG.  He had around 194 hours on type and 13488 in total.  The 25 year old Co-Pilot was a relatively new First Officer with 816 hours on type and 1063 in total.

The crew had agreed the Aircraft Commander would fly the first sector and the Co-Pilot would be Pilot Flying for the next three.  During the first sector the crew received a Terrain Avoidance and Warning System (TAWS) TERRAIN warning while at FL160 and a TERRAIN FAULT caution light. These disappeared after just over 6 minutes and were probably due to a GPS signal anomaly.

During the subsequent (first) approach to Al Hoceima the crew conducted an RNAV approach to runway 17 over the sea. The Aircraft Commander, who was Pilot Flying, was unable to see the runway at the 1030 ft Minimum Descent Altitude (MDA) but continued below this height at descent rate of 1000 ft/min.  The aircraft descended to just 60 ft, 1760 m from the threshold at a point it should have been at c 300ft.  The ACSS TAWS activated with TERRAIN AHEAD PULL UP and AVOID TERRAIN messages at the aircraft descended to just 45 ft.  The aircraft climbed to c 108 ft, which the crew maintained as they approached the airport and then landed.

On their return to Al Hoceima later in the day the Co-Pilot was Pilot Flying.  The crew decided on a VOR/DME approach, with a lower MDA (760 ft).  the Aircraft Commander briefed however that if the runway was not in view at the MDA they would descend to 400ft, maintain that until the runway was visible, and if not, go around at 2 nm distance.  The Co-Pilot suggested the TAWS should be turned off and after consulting the Dispatch Deviation Manual, the Aircraft Commander agreed.

The rate of descent was reduced to 1,000 ft/min at 445 ft and the Aircraft Commander declared they would “continue”. The rate of descent was increased to 1800 ft/min as the aircraft passed through 310ft before being reduced to 1400 ft/min at 135 ft.  The Co-Pilot determined the situation was “not normal…[and]…I’ll take it manual”, disengaging the autopilot at just 80 ft / 130 knots. While the Co-Pilot (the Pilot Flying) applied a nose up input, the Aircraft Commander (the Pilot Monitoring) applied a stronger nose down input.  This continued for 9 seconds and 2 seconds later the Co-Pilot advanced the throttles. 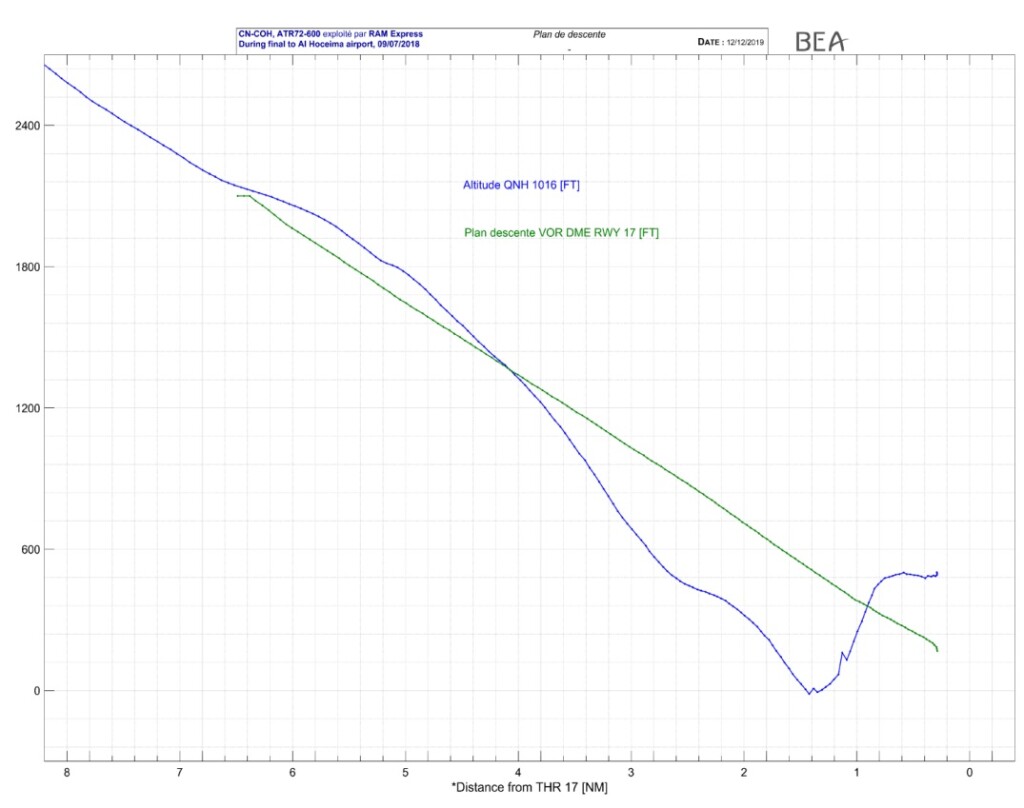 However, 1.4 nm from the threshold, the aircraft landing gear contacted the sea twice with 3.2 g and 3.9 g vertical decelerations. 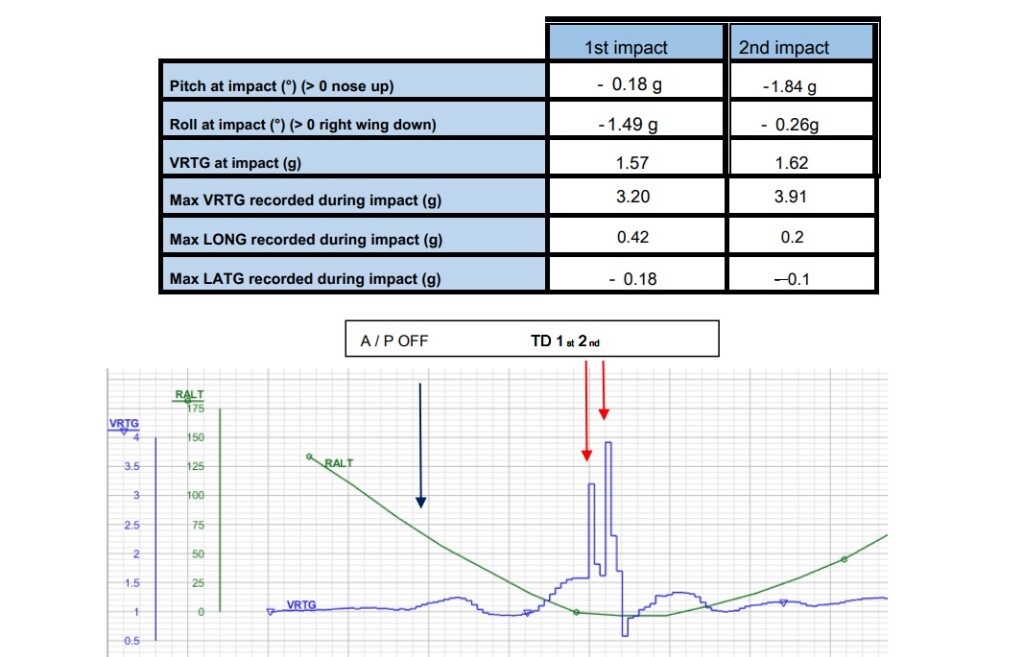 On landing fuselage panels were found to be broken with stringers deformed. 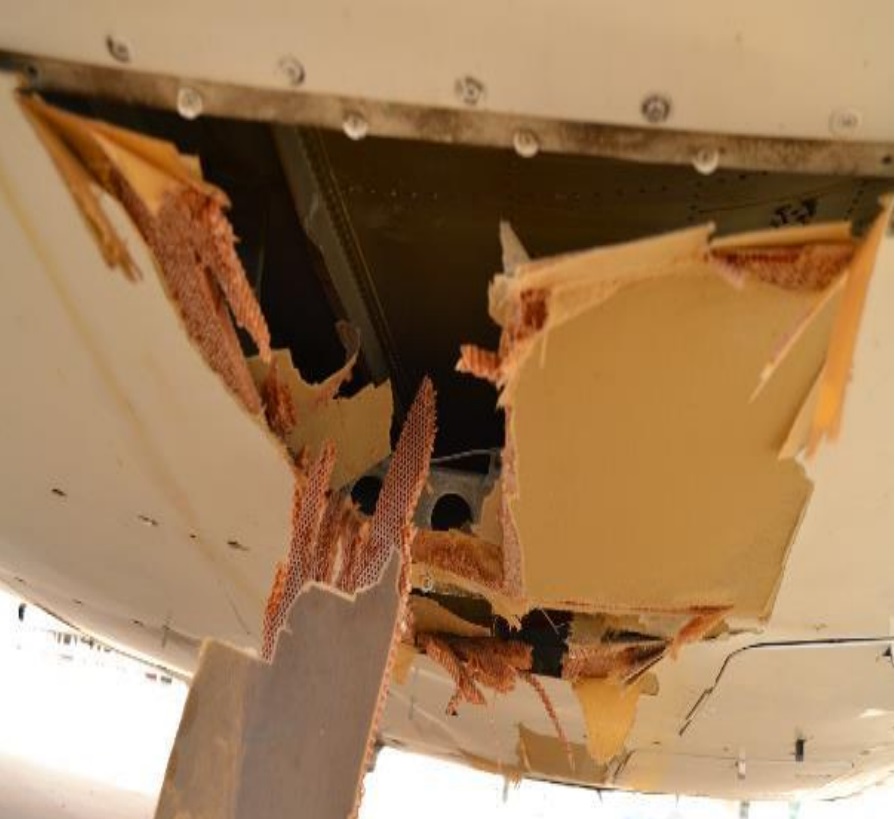 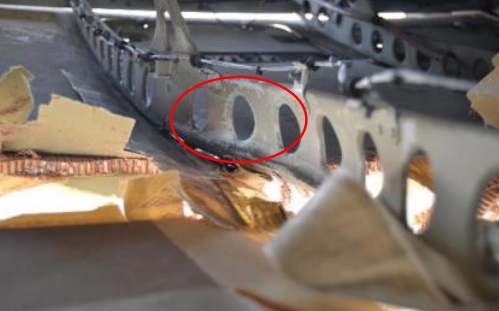 Water had been ingested through air inlets, leaving salt deposits. 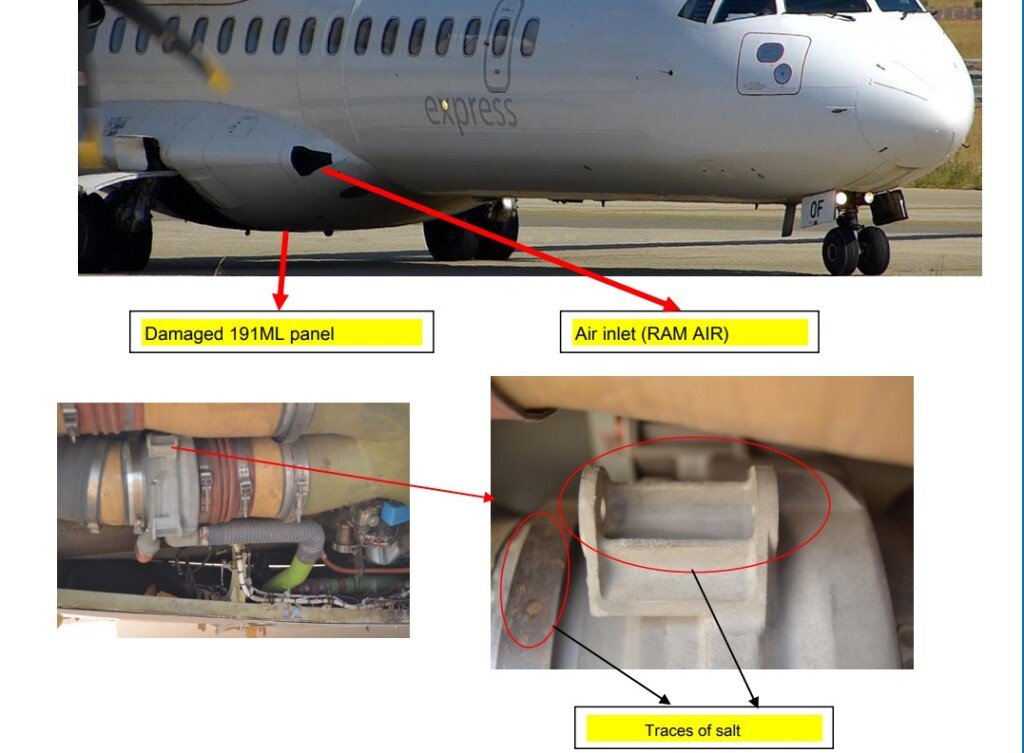 The landing gear had to be replaced due to being overloaded.  The 58 occupants were all uninjured however.

Within Royal Air Maroc Express non-stabilised approaches featured in just 0.62% of the approached analysed in July 2018 (98.89% all flights were downloaded successfully).

The event…was due to non-compliance with operational procedures, in particular; deliberate stopping of TAWS, continuing the approach unstable below the stabilization floor and the continuation of the approach beyond the minimum descent altitude (MDA) in the absence of visual references.

By the improper deactivation of the TAWS and the absence of “Advisory Calls” announcements during the approach, the crew deprived themselves of all possibility of becoming aware of and managing the undesirable situation of Flight directed towards the ground Flight Toward Terrain “in which the aircraft was located until touchdown.

The deficiency in CRM within the flight crew, in particular in terms of communication, coordination, cockpit authority gradient and the level of self-assertion of the Co-Pilot, made the latter slow to react against the Aircraft Commanders directives, which were incompatible with stabilisation and approach minima.

The Copilot’s reaction, even though it late, did limit the damage suffered by the aircraft.

Three safety recommendations are made to the airline in relation to:

This accident occurred before the 2020 COVID-19 pandemic.  However, IATA has warned that aggregated that FDM shows the rate of unstable approaches has been increasing during the period of reduced operations. 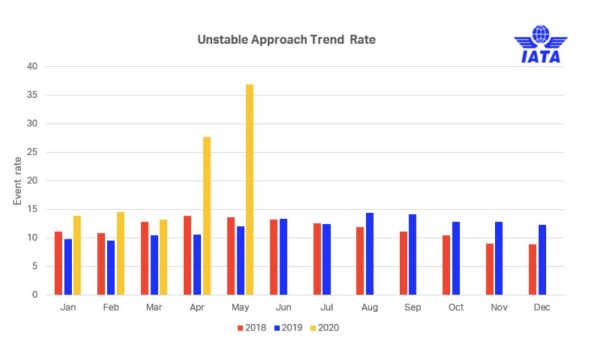 High Airspeed and Low Engine Thrust events were key to the increase. 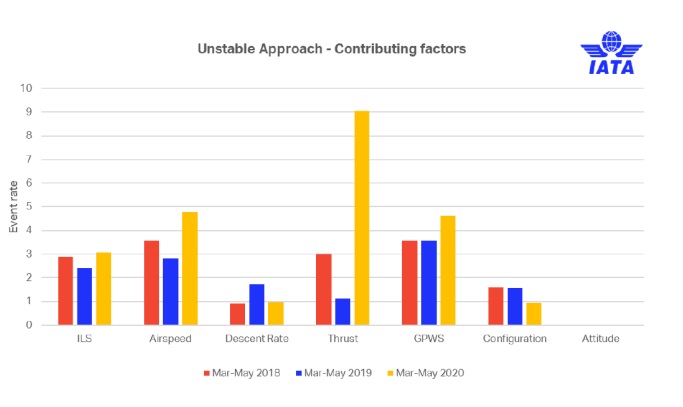 Any significant deviation from planned flight path should be announced and promptly corrected. In order to ensure the safety of the flight, a go-around is required if the approach cannot be continued within stabilized approach parameters. It is important to highlight that the decision to execute a go-around is not, in any way, an indication of poor flight crew performance but rather prudent decision-making. There should be a clear non-punitive go-around policy.