The French accident investigation agency, the Bureau d’Enquêtes et d’Analyses (BEA), has issued their report (warning 12Mb) on the 13 July 2012 accident to Gulfstream G-IV business jet N823GA.  The US registered aircraft was operated by Universal Jet Aviation (UJT) under 14 CFR Part 135.  It suffered a runway excursion while landing during a short ferry flight from Nice, France to Le Castellet Airport. All three occupants were killed. 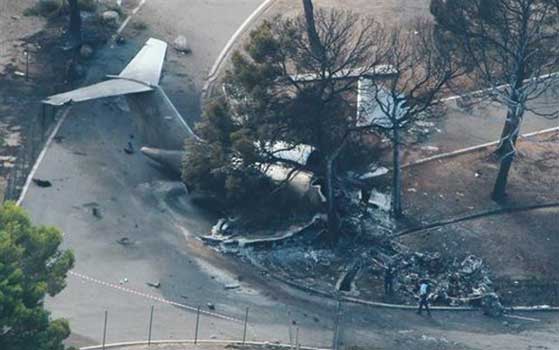 Between Nice airport and Le Castellet aerodrome which was not familiar to the crew, the flight was short. The cruise, which lasted only five minutes, left the crew little time to prepare for their arrival. The flight was the last of the day and it was made without any passengers, with the co-pilot in the right seat as PF. This context may have been conducive to lax pre-flight planning and management of the flight by the crew with a heavy workload during the cruise and the approach. Despite having been warned the day before of the need to park the aeroplane at Le Castellet, the copilot learnt the characteristics of the aerodrome during the flight. Few checklists and briefings were heard throughout the flight. During the flight, the crew referred to the proximity of the terrain, the need to reduce speed and anticipate the configuration, and the short runway length. The crew nevertheless understated the impact of a short flight on the preparation of the arrival.

The BEA say that:

During a visual approach to land on runway 13 at Le Castellet aerodrome, the crew omitted to arm the ground spoilers. During touchdown, the latter did not deploy. The crew applied a nose-down input which resulted, for a short period of less than one second, in unusually heavy loading of the nose gear. The aeroplane exited the runway to the left, hit some trees and caught fire.

The runway excursion was the result of an orientation to the left of the nose gear and the inability of the crew to recover from a situation for which it had not been trained. The investigation revealed inadequate pre-flight preparation, checklists that were not carried out fully and in an appropriate manner. A possible link between the high load on the nose gear and its orientation to the left was not demonstrated.

In particular they explain:

Forgetting to arm the ground spoilers delayed the deployment of the thrust reversers despite their selection. Several MASTER WARNING alarms were triggered and the deceleration was low. The crew then responded by applying a strong nose-down input in order to make sure that the aeroplane stayed in contact with the ground, resulting in unusually high load for a brief moment on the nose gear. After that, the nose gear wheels deviated to the left as a result of a left input on the tiller or a failure in the steering system. It was not possible to establish a formal link between the high load on the nose gear and this possible failure. The crew was then unable to avoid the runway excursion at high speed and the collision with trees. 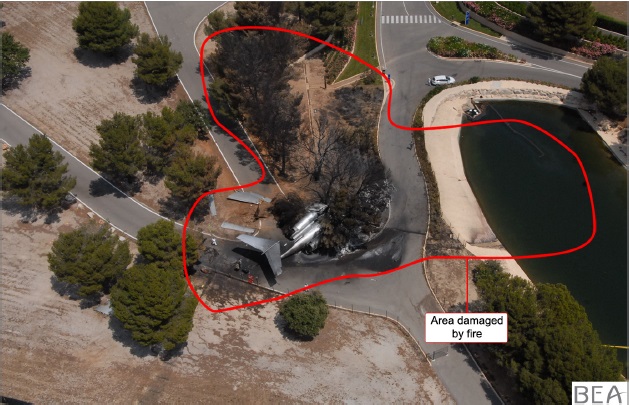 The aerodrome fire-fighter, alone at the time of the intervention, was unable to bring the fire under control after the impact. Although located outside of the runway safety area on either side of the runway centre line, as provided for by the regulations, the presence of rocks and trees near the runway contributed to the consequences of the accident.

The BEA concluded the accident was caused by the combination of the following factors:

The BEA observe on the use of checklists:

During the flight, the ‘‘before landing’’ checklist, which was not fully verbalized or carried out in ‘‘challenge and response’’ mode, i.e. without any check or confirmation by the other pilot, did not provide the crew with a check step. As a result, they did not detect the failure to arm the ground spoilers during the approach.

The analysis of the accident flight [and] the video recordings of flights by UJT pilots and interviews, shows that carrying out the checklists in ‘‘challenge and response’’ mode was not systematic within the operator’s personnel. This had not been identified as a problem during in-flight audits by the FAA.

Using a checklist as a list of actions to carry out does not provide a step for cross-checking items and makes the flight more susceptible to errors and omissions.

The BEA also note that:

UJT had not sent any application for an operating permit for non-scheduled air services for the flights on 13 and 15 July 2012 made or planned to be made in French airspace.

The operator did have a Safety Management System and a confidential reporting system, even though neither were required by US regulations. The BEA however concluded that at the time of the accident neither has:

…a sufficient degree of maturity to enable effective feedback in terms of improving safety: feedback to the crews did not contain information on flight safety as such, and the feedback system was not yet used by crews.

The report contains a number of safety recommendations regarding:

We have previously written an article about a G-IV take-off accident in the US: Gulfstream G-IV Take Off Accident & Human Factors.  That accident also featured poor use of checklists and resulted in a runway excursion and a catastrophic fire.

We have also looked at an accident to an ad hoc chartered CASA C212: Catastrophe in the Congo – The Company That Lost its Board of Directors

In other organisations it has been apparent after accidents that the documented SMS was not an effective, living system but in practice was just ‘shelfware’ (as we discussed recently in the cases of Metro-North and a Mid Air Collision between a Typhoon & target Learjet 35).

Although this accident happened on a positioning flight, after delivering their client, it again highlights the importance of understanding the true capabilities of any operator you plan to charter from and seeking specialist aviation advice.