While manoeuvring over the River Thames, an AgustaWestland A109E helicopter, G-CRST, operated by charter company Rotormotion, collided at 700ft amsl with a crane in Vauxhall, Central London.  The crane was atop the 50 storey St George Wharf Tower.  The helicopter pilot and a passer-by died.  The UK Air Accident Investigation Branch (AAIB) have now issued their report into the accident, which occurred in poor visibility on 16 January 2013. 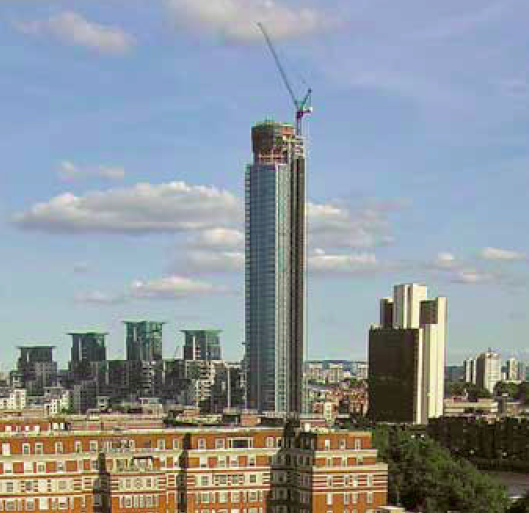 Circumstances of the Accident 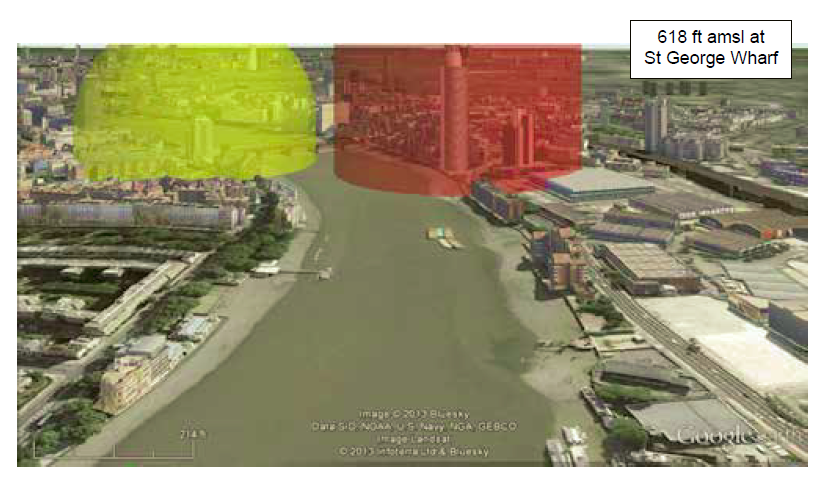 The approach to Vauxhall Bridge from the west at 618 ft amsl with the exclusion areas in yellow and, for St George Wharf, red.  Helicopter Route H4 follows the river. (Credit: AAIB)

AAIB have made 10 safety recommendations.  Six relate to obstacles.  Julian Firth, a principal inspector from the AAIB, told the BBC:

The AAIB has recommended improvements in the way obstacles are notified to the regulator so that their effect on aviation factors can be considered and before the planning permission is granted on the case of new developments.

Two more relate to pre-flight risk assessment processes and the last two to Helicopter TAWS.  These are matched pairs to the European Aviation Safety Agency (EASA) and the Civil Aviation Authority (CAA).  The CAA currently are responsible for rule-making for civil ‘state’ aircraft operations, perhaps an acknowledgement of the regulatory differences no doubt to feature in the awaited Glasgow Clutha Vaults police helicopter accident report.

AAIB highlight the European Helicopter Safety Team (EHEST) Pre-flight Planning Checklist as one potential tool to increase awareness of risk and improve decision making pre-flight.  However it is still vital to appreciate how changes in-flight affect risk.  In many ways this accident neatly highlights how circumstances and changes once a flight is underway can magnify risk in a matter of minutes.  In-flight texting, while it may not have distracted the pilot during the final manoeuvre, was a mechanism that could increase stress and introduce rapid changes of plan.  Texting in-flight was a factor in a US 2011 Helicopter Emergency Medical Service (HEMS) fatal accident.  CAA issued a safety notice on crew distraction days after the Vauxhall accident. There is however surprisingly little on the operator, its organisation, training, crew supervision and procedures in the AAIB report.  Apart from brief mentions of obstacle database updates and NOTAM policy, the main detail is in just the three sentences of para 1.17.7.  There is also no detail on the contractual arrangement with the customer. Even though the Garmin 430 was fitted as a ‘customer option’ it should have been included helicopter’s Maintenance Programme and database updates could have scheduled more regularly.  The prioritisation of non-mandatory systems introduced for safety and other reasons, in that case HUMS, is a theme of a Norwegian AS332L accident from 2007 (LN-OPG). Clearly there are systemic issues on how planning permission is given for large buildings, particularly near published heli-routes:

UPDATE 20 November 2014: The CAA issued a safety notice on 20 November 2014 on the issue of flight planning, citing this accident, which highlights the EHEST material mentioned above.

UPDATE 25 November 2015: A coroners inquest is underway.  The AAIB have also updated the progress on their recommendations.  Oddly some CAA responses are dated ‘December 2015’.  This is potentially a typo.  The CAA witness statements were discussed at the CAA Board in July.

UPDATE 8 December 2015: The inquest jury retires to consider their verdict.

UPDATE 11 December 2015: The inquest jury conclude that an “inappropriate decision” to fly was made due to “commercial pressure”.

UPDATE 10 May 2017: EASA made the following response during 2016 (catalogued in their Annual Safety Recommendations Review 2016 issued today) on TAWS:

The Agency understands that, based on the type of operation performed during the accident, this safety recommendation is related to Commercial Air Transport (CAT) operations. Whilst it is acknowledged that the aircraft involved in the subject accident was operating under national legislation at the time, it should be noted that, since 28 October 2014 at the latest, CAT operations are required to be conducted in accordance with Commission Regulation (EU) No 965/2012 on air operations.  Helicopters used in offshore Commercial Air Transport (CAT) operations, with a Maximum Certificated Take-Off Mass (MCTOM) of more than 3175 kg or a Maximum Operational Passenger Seating Capacity (MOPSC) of more than 9, and first issued with an individual Certificate of Airworthiness (CofA) after 31 December 2018, are required to be equipped with a Helicopter Terrain Awareness Warning System (HTAWS) (see SPA.HOFO.160 (c) of Commission Regulation (EU) 2016/1199 amending Regulation No 965/2012 on air operations). EASA has conducted a Preliminary Impact Assessment (PIA) to determine and prioritise any actions that the Agency should take to address the related safety issues.

One of the candidate actions is Controlled Flight into Terrain (CFIT) prevention with HTAWS. In response to the September 2016 PIA findings, the Agency intends to introduce a new Rulemaking Task (RMT) into its Rulemaking Programme (RMP) for 2017-2021, in order to: – consider extending the existing HTAWS requirements for offshore helicopter operations to include those helicopters first issued with an individual Certificate of Airworthiness (CofA) on or before 31 December 2018 (ie retrofit). – consider mandating HTAWS on board helicopters used for CAT other than offshore helicopter operations, including Helicopter Emergency Medical Service (HEMS) operations.

The helicopter size threshold will be determined during the task, and may be expressed in MCTOM, MOPSC, Instrument Flight Rules (IFR) or Visual Flight Rules (VFR), or a combination of these criteria. For VFR operations, the PIA results foresee the MCTOM threshold to be between 2 500 kg and 3 175 kg. It should be noted that research programmes have been taking place to improve HTAWS software in order to increase the time between the first caution or warning and impact without generating more false warnings. Further research may still be needed, and an improved European Technical Standard Order (ETSO) be published, before mandating retrofit for the existing helicopter fleet. The Agency’s Rulemaking Programme for 2017-2021 is expected to be published in the fourth quarter of 2016, after consultation with the EASA Member States’ Advisory Body (MAB) and the Stakeholders Advisory Body (SAB).

In the meantime, safety promotion material produced by the European Helicopter Safety Team (EHEST) already addresses some of the root causes of CFIT accidents. For example, ‘HE9 Automation and flight path management’ for IFR flights (published in September 2015) and ‘Helicopter Flight Instructor Manual’ for unplanned flying in Instrument Meteorological Conditions (IMC) during VFR flights (published in June 2015). 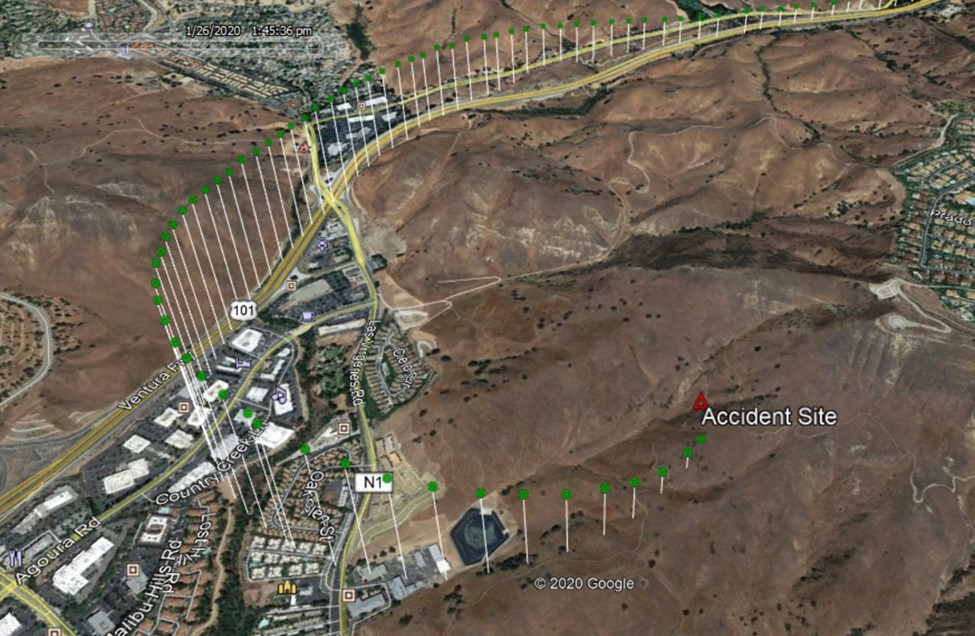 For aviation advice you can trust on helicopter safety matters and the safe contracting of air services, contact Aberdeen based aviation consultancy, Aerossurance at enquiries@aerossurance.com