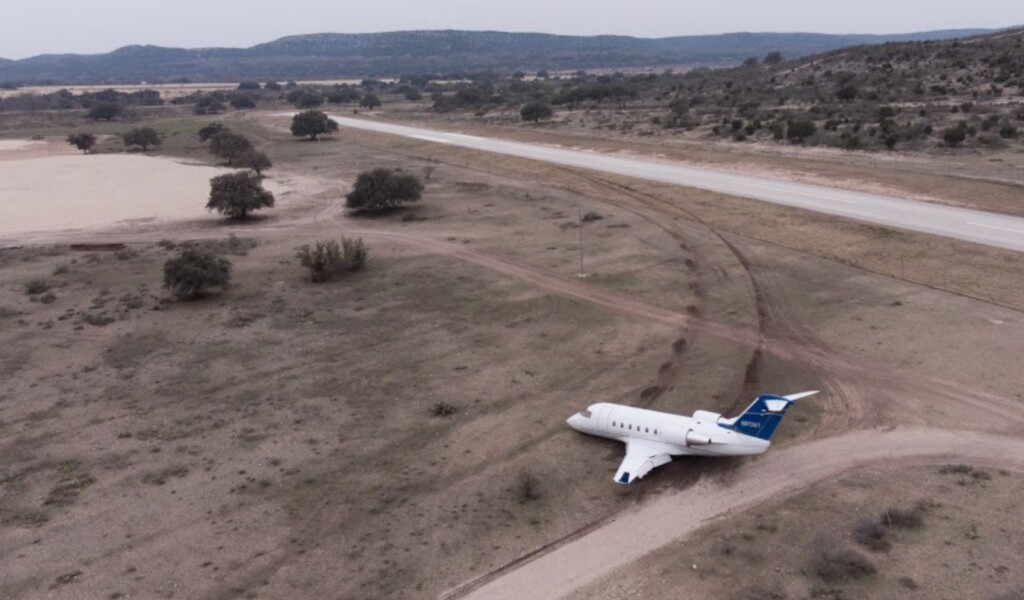 The US National Transportation Safety Board (NTSB) explain in their safety investigation report (issued 29 June 2020) that the business jet had Fort Worth Meacham International Airport (FTW), Fort Worth, Texas to take the 6 passengers for a day of “actvities”* at the Ox Ranch.

…after leveling off at flight level 280, the flight crew checked the weather conditions at nearby airports. There are no automated weather reporting stations on or near the airport.  Based on the weather information that they had [Uvalde (UVA) and Laughlin (DLF)], the pilot planned for a visual approach…

The flight crew called their downwind and base legs over the airport’s common frequency. On base leg, the pilot had the copilot set the flaps to 30°. As the pilot turned the airplane onto the final approach for landing, the copilot lowered the landing gear. The airplane was 4.5 miles from the end of the runway at 2,500 ft agl and an airspeed of 170 kts. The copilot completed the “Before Landing” checklist. The pilot confirmed the thrust reversers were armed and called for the flaps to be set to 45°. At 2 miles from the end of the runway, the pilot checked his approach speed and confirmed the landing gear was down.

The pilot reported there was turbulence and wind gusts from the hills below and to the west of them. As they passed 50 ft. and coming over the runway, the pilot reduced engine power to idle. The pilot reported they then encountered a windshear. Their airspeed dropped rapidly and the airplane “was forced down” to the runway. The pilot unlocked the thrust reversers, applied brakes, and reached to deploy the ground spoilers. As he deployed the thrust reversers, the pilot said it felt like the right landing gear collapsed. He applied full nose-left rudder and left-wing-down aileron, but the airplane continued to veer to the right. The pilot tried using the tiller to steer to the left with no response.

A representative for the airport reported that the airplane on landing hit hard.  About two-thirds of the way down runway 35, the airplane slid off the right side of the runway. 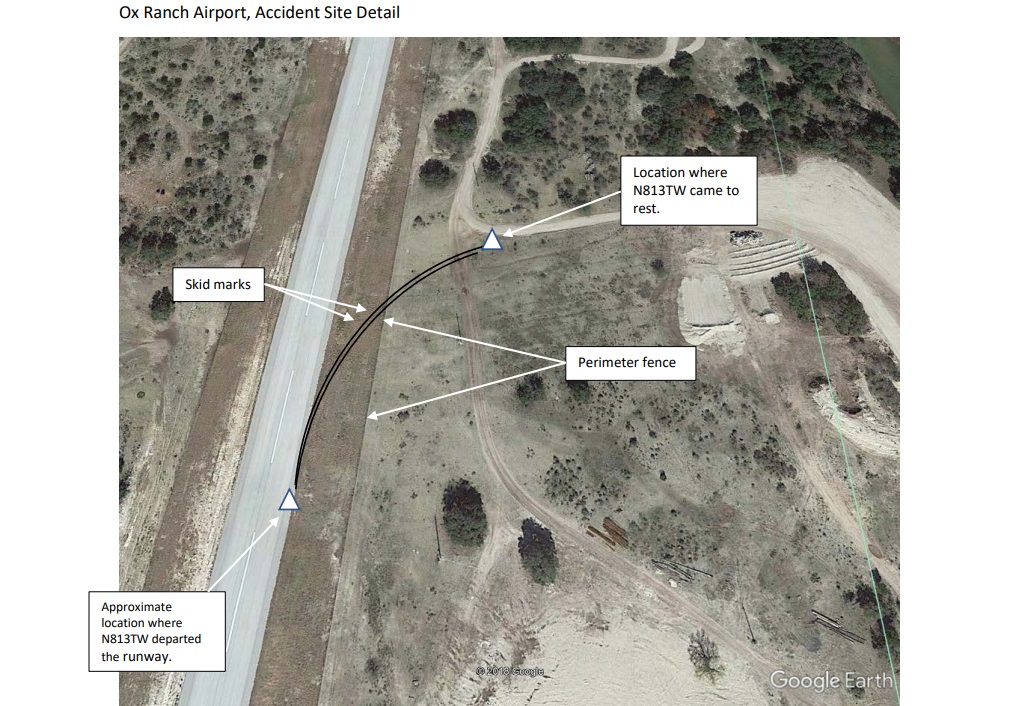 The airplane proceeded through a ditch and struck a perimeter fence before coming to a stop. 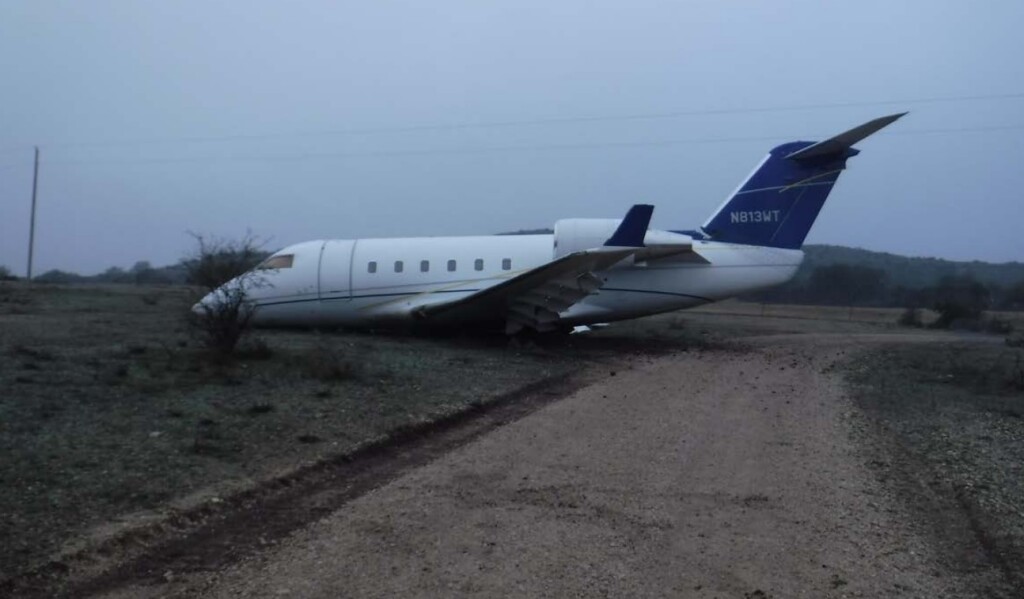 The airplane left the side of the runway and went into the grass, which resulted in substantial damage; the right main landing gear was broken aft and collapsed under the right wing. 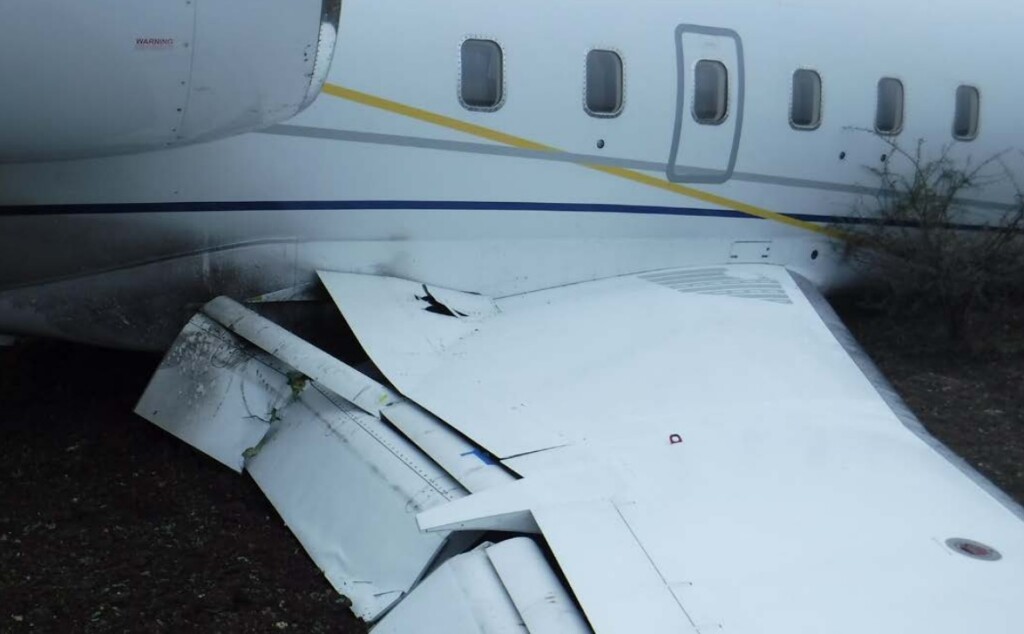 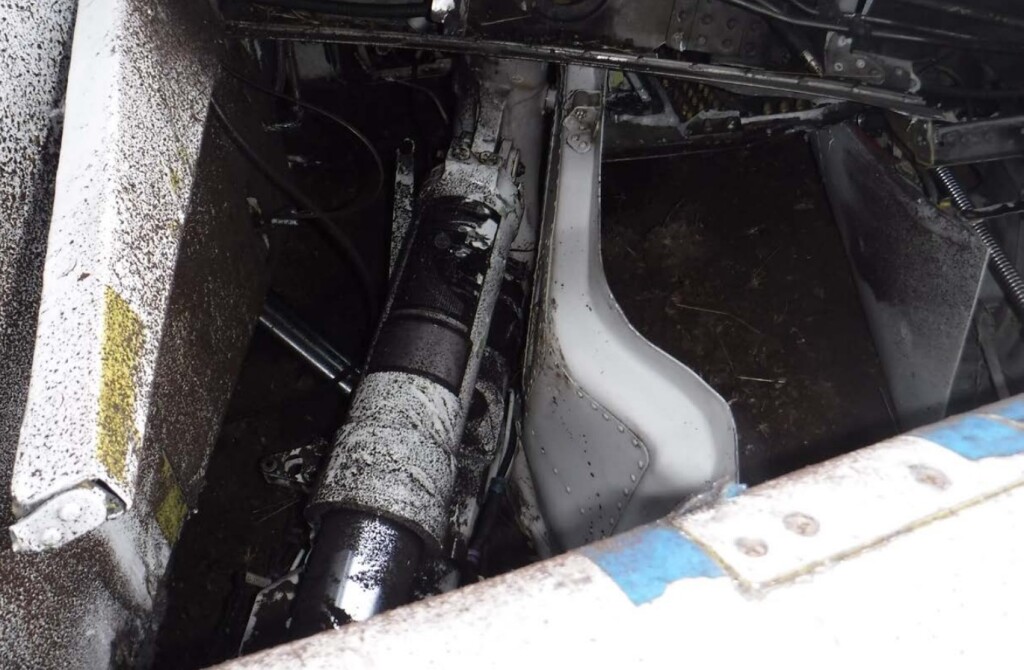 The tail was damaged by the perimeter fence. 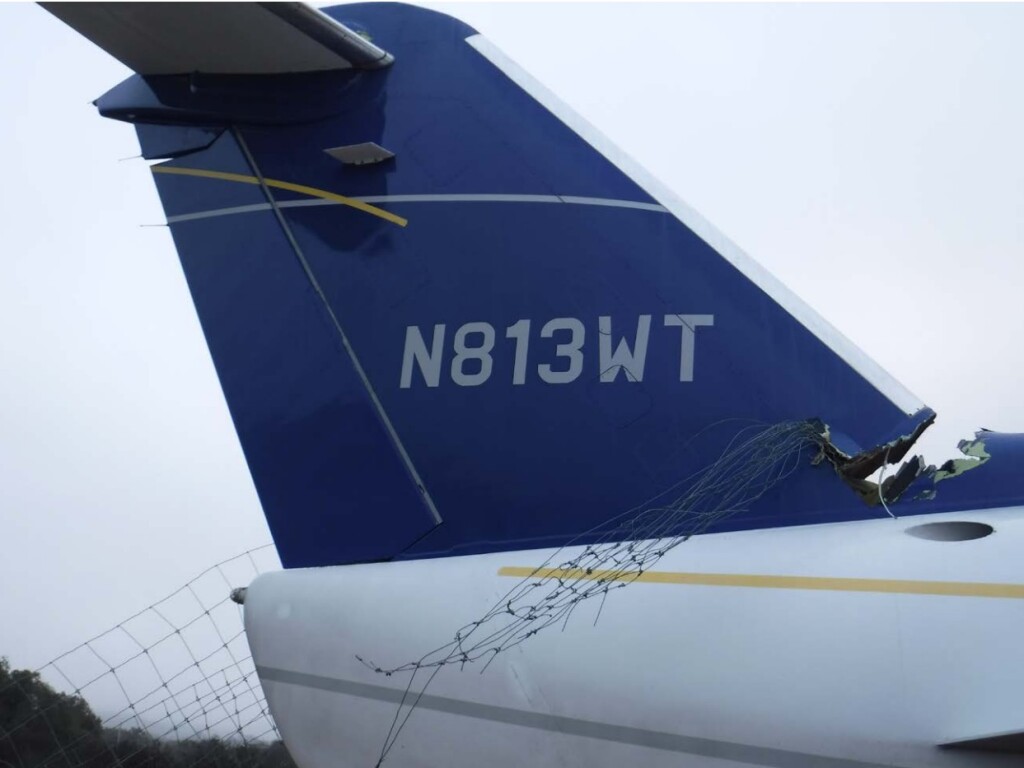 The 1983 aircraft appears to have been assessed as beyond economic repair.

* The 18000 acre Ox Ranch offers over 60 varieties of animals to hunt, firing 0.5″ machine guns ($5 per round), T-34 and Sherman tank driving ($950 extra per 76mm shell fired), spelunking for the whole family and for the true hard core: bird watching and yoga.

When the aircraft was examined no pre-accident defects were found that could have contributed to the accident.  When the Fairchild GA-100 CVR was examined the tape inside was found broken so no data could be retrieved.

A review of weather conditions showed surface winds out of the north to northwest at 15 kts, with some gusts up to 20 kts. There was potential for turbulence and wind shear below 5,000 ft, but there were no direct observations. The area forecast about 30 minutes after the accident called for northwesterly winds at 10 to 17 kts with a few higher gusts in the afternoon for the general area.

Given the pilot’s account, the weather information for the area, and the data from the airplane’s EGPWS, it is likely that the airplane encountered wind shear while transitioning from approach to landing.

The airplane’s encounter with wind shear on short final approach to the runway, which resulted in a hard landing and fracture of the right main landing gear.