G200 Leaves Runway in Abuja, Nigeria Due to “Improper” Handling

On 25 January 2018 Nestoil Gulfstream 200 (G200) 5N-BTF suffered a loss of control and runway excursion during the landing roll at Azikiwe International Airport, Abuja.  The aircraft came to a stop at the right shoulder of runway 22 with the right main landing gear broken off.  Investigators report this was due to the premature use of nose wheel steering, exaggerated by both crew making inputs. 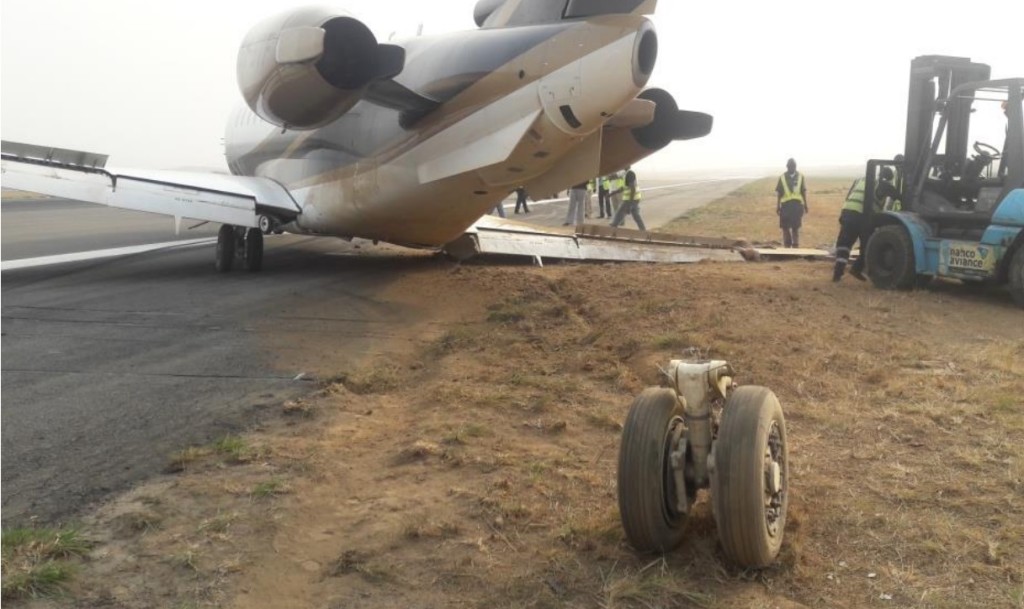 The aircraft was operating a charter flight, on an Instrument Flight Rules (IFR) flight plan, with four passengers and three flight crew members onboard.  The Captain was the Pilot Flying (PF) and the Co-pilot was the Pilot Monitoring (PM).  [A third pilot, described as an observer, was also in the cockpit].  The aircraft was vectored for an ILS approach runway 22.

The AIB confirm the approach was stabilised:

The aircraft fuselage was in one piece, but the [right main] landing gear assembly was detached. The nose landing gear tyres were abraded crosswise and the right inboard main wheel tyre was found deflated. 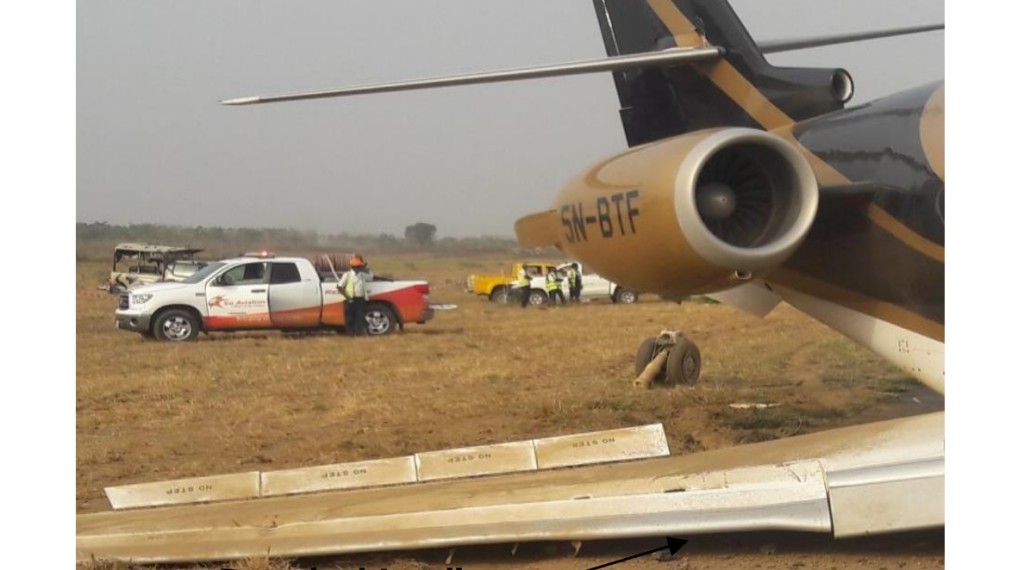 The ATC immediately notified the Aircraft Rescue and Fire Fighting Services (ARFFS), Approach Radar Control and other relevant agencies about the occurrence. All persons on board disembarked normally with no injuries.

…the skid marks on the runway indicated that the aircraft steered in an S-pattern continuously with increasing amplitude, down the runway.

On examining the main wheel tires, no flat spots were found, therefore the effects of locked wheels, either before landing or during the landing roll, on this incident, can be ruled out.

The PM reported taking over control at the latter part of the landing roll when he saw that the aircraft was out of control. The PM did not announce taking over control, so both pilots were probably having inputs on the rudder pedal and brakes at the same time, counteracting each other and making the situation worse. FDR and CVR data were not available to determine when the PM took over control and to differentiate which pilot was doing what.

The PM also cautioned the PF not to use the Nose Wheel Steering (NWS). During the post incident interview, the PF reported using the NWS during the landing roll but could not recall at what speed. The NWS angle and control wheel position are not recorded on the FDR, and in addition, the speed at which it was used is not verifiable, therefore its effect on the controllability of the aircraft cannot be analysed.

A NWS toggle switch on the left console in the cockpit allows the pilot to activate the NWS system or to switch it off and place the nose landing gear in a free swivel mode for shimmy damping. 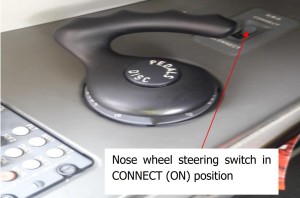 The switch was found to be in the CONNECT (ON) position after the incident.  On examination of the nose wheel tires, transverse abrasions were found indicating that the NWS was being controlled and not in the free swivel mode.

For the landing, the nose wheel was firmly on the ground, ground airbrakes were extended, Rudder/Rudder pedal nose wheel steering was used, light to medium braking (with differential braking) was used; all controls were available for controlling the aircraft on the landing roll. The investigation did not find any adverse conditions that might have affected the steering/directional controllability of the aircraft during the landing roll.

The AIB conclude that:

The handling techniques used, in attempting to bring the aircraft to the centre line and to recover from the resulting oscillations, were inadequate or inappropriate. These can be categorized as proficiency errors leading to additional errors during recovery.

Furthermore, during the latter part of the landing roll, both pilots were probably having inputs on the rudder pedal and brakes at the same time, counteracting each other and making the situation worse; the procedure to take over controls is covered in the SOPs, so this can be categorized as a non-compliance error.

The use of improper directional control techniques to maintain the aircraft on the runway.

Improper coordination in taking over control of the aircraft by the PM which was inconsistent with the SOP.

Four Safety Recommendations were made.  Nestoil were recommended to “ensure that the crew involved in the accident undergo Crew Resource Management training” and “review the crew training on handling techniques and characteristics of the aircraft during landing roll.”  A third was to the Nigerian CAA that they should verify compliance with the first two recommendations.  A fourth, to airport operator FAAN, was in relation to their moving of the wreckage from a temporary location without permission.

An unrelated G200 accident occurred in Moscow on 26 Feb 2019 to Silk Way Business Aviation‘s 4K-AZ88.  According to the MAK preliminary report, the number 2 engine thrust reverser was stowed while the number 1 engines was at maximum reverse.  The aircraft suffered a similar MLG failure. 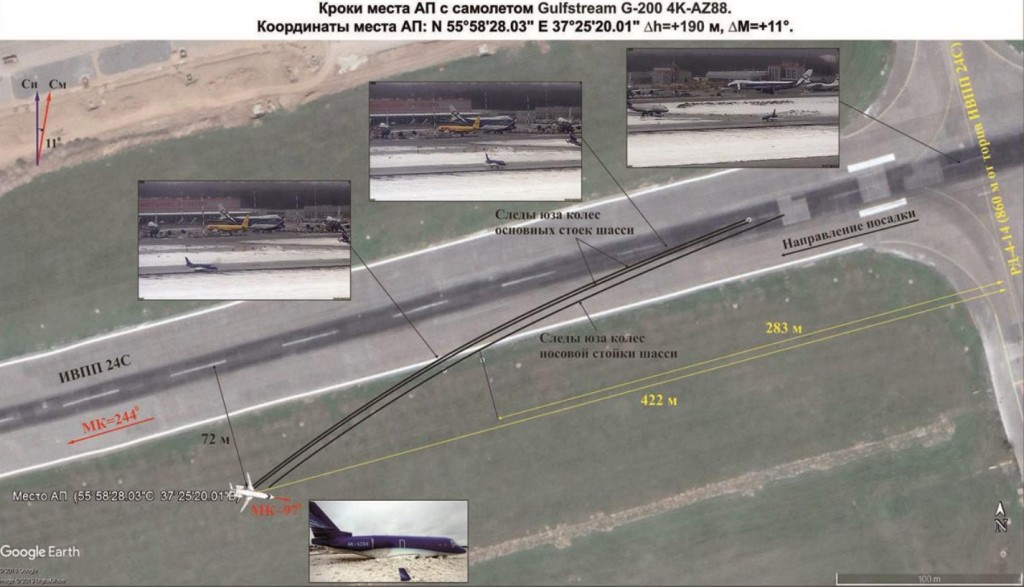 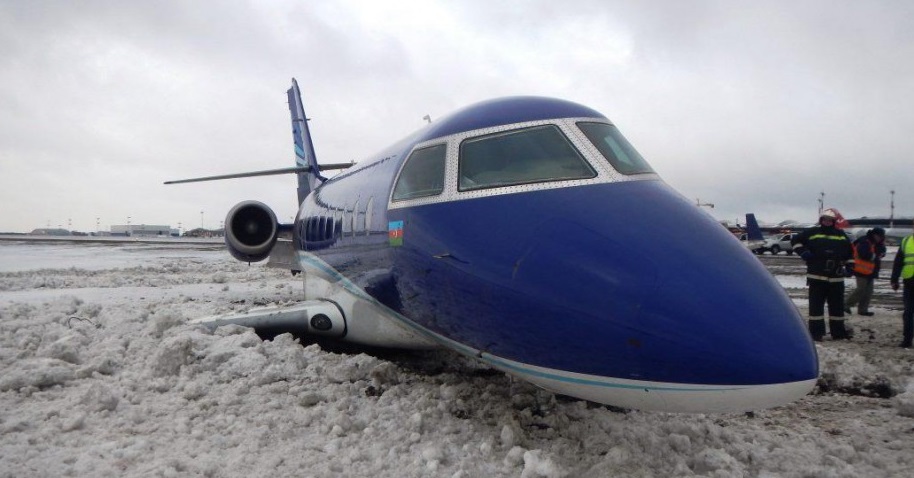 The reason for the accident…was the stowing of the right-engine reverser by the pilot from maximum thrust reversal while maintaining maximum thrust reversal on the left engine, which led to the appearance of a significant turning moment to the left.
The aircraft turning to the left in the presence of a cross wind to the right, as well as turbulence of the airflow near the rudder due to the open thrust reversal mechanism of the left engine and possible ice deposition on the outer surfaces of the aircraft, which led to the development of a significant swing moment on the rudder.
The development of a significant articulated moment on the rudder, in the absence of power steering in the rudder control system, led to its deviation to the leftmost position despite significant (up to 82 kg or 180 pounds) forces exerted by the crew on the pedals. The deviation of the rudder (pedals) to the left also led to the deviation of the nose wheel to the left.
The total moment from the running reverse of the left engine, from the right engine in direct draft mode, and from the rudder and nose wheel deflection to the left, led to the aircraft rolling out of the runway and its damage. Separate braking applied by the crew could not prevent the aircraft from rolling out.

The contributing factors could have been:
– the crew did not take into account the provisions of the AFM about the possible “destabilizing” effect of the thrust reverse when landing with a cross wind on the runway with a reduced braking coefficient;
– increased psycho-emotional tension of the crew members due to long dissatisfaction and emotional discussion of instructions and actions of ATC controllers. At the same time, the instructions and actions of the ATC service controllers were in line with established procedures.