The Icelandic Transportation Safety Board (ITSB), the RNF, issued their report on a dramatic Beechcraft King Air 200 accident that occurred on 5 August 2013.  The air ambulance, TF-MYX, operated by Mýflug Air, was heading back to its home base at Akureyri (BIAR) Airport, after completing an earlier ambulance flight, with two flight crew and a paramedic on board. 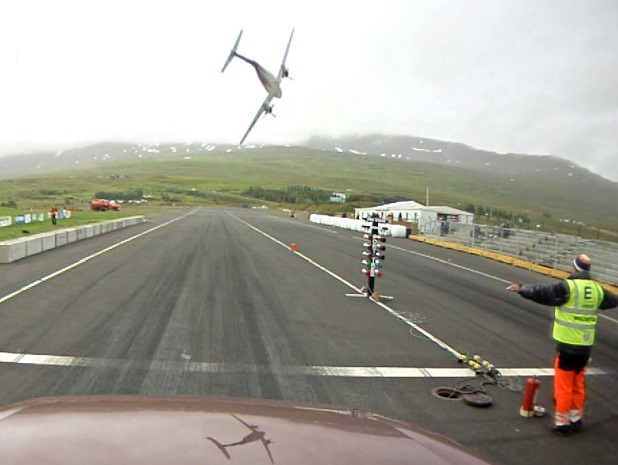 During cruise, the flight crew discussed the commander’s wish to deviate from the planned route to BIAR, in order to fly over a racetrack area near the airport. At the racetrack, a race was about to start at that time. The commander had planned to visit the racetrack area after landing. The aircraft approached BIAR from the south and…made a request to BIAR tower to overfly the town of Akureyri, before landing. The request was approved by the tower and the flight crew was informed that a Fokker 50 was ready for departure on RWY 01. The flight crew of TF-MYX responded and informed that they would keep west of the airfield. After passing KN, the altitude was approximately 800 ft according to the co-pilot’s statement. The co-pilot mentioned to the commander that they were a bit low and recommended a higher altitude. The altitude was then momentarily increased to 1000 ft. When approaching the racetrack area, the aircraft entered a steep left turn. During the turn, the altitude dropped until the aircraft hit the racetrack.

The accident occurred 2.5 nm NW of Akureyri airport at an elevation of 468 ft.  The racetrack is located in the foothills of a mountain, where the land slopes down against the flight path, i.e. after the left turn.

The impact was captured on CCTV at the race track:

Due to the fact that this was a high energy impact with an immediate fire explosion, the possibilities of survival were considered at a minimum. The paramedic was seated in the cabin section close to where the cabin broke from the cockpit. The cockpit and the cabin rolled down the racetrack and impacted a grass ridge at the end of the racetrack and came to rest on top of the ridge.

The cockpit section around the co-pilot, sitting in the right side of the cockpit, was found to have incurred significantly less deformation than the left side. The commander and the paramedic were fatally injured and the co-pilot was seriously injured. The aircraft was destroyed.

The Transportation Safety Board of Canada (TSB) assisted with the video analysis.

Based on the information from the investigation, as well as the results from the photogrammetric analysis, the flight from the point of deviation was simulated in a King Air flight simulator located in Farnborough (UK).

The operator was established in 1984, as a sightseeing operator with one Cessna206 aircraft. In 2006, the operator started air ambulance flights as its core operation, based on a governmental contract.

In 2014 the company exceeded 500 air ambulance flights per annum for the first time.

At this time [2006], the operator emphasised on a safety culture within its operation and, in the following years, implemented a Safety Management System (SMS). Approximately three months prior to the accident, at a crew training course, the operator emphasized that deviations from Standard Operating Procedures (SOP) were not acceptable.

The investigation revealed that some flight crews occasionally cancelled their IFR flight plan and proceeded visually for sightseeing, while not transporting a patient, especially in good weather conditions and when there was no time pressure on the flight. This practice is within the scope of the operator’s manuals. …the commander was known for good airmanship while flying, as well as good preparation before each flight. This was stated by his colleagues as well as the operator’s management. [T]he commander had made a flyby over the racetrack area once before, but from the opposite direction, i.e. approaching from the southwest. This was without steep turns and with a minor deviation from the approach to the airfield. The racetrack is similar in shape to a runway. However with the racetrack being narrower, shorter and sloping upwards, it might have provided the pilot with the visual illusion of the aircraft being at a greater altitude and distance from the racetrack. 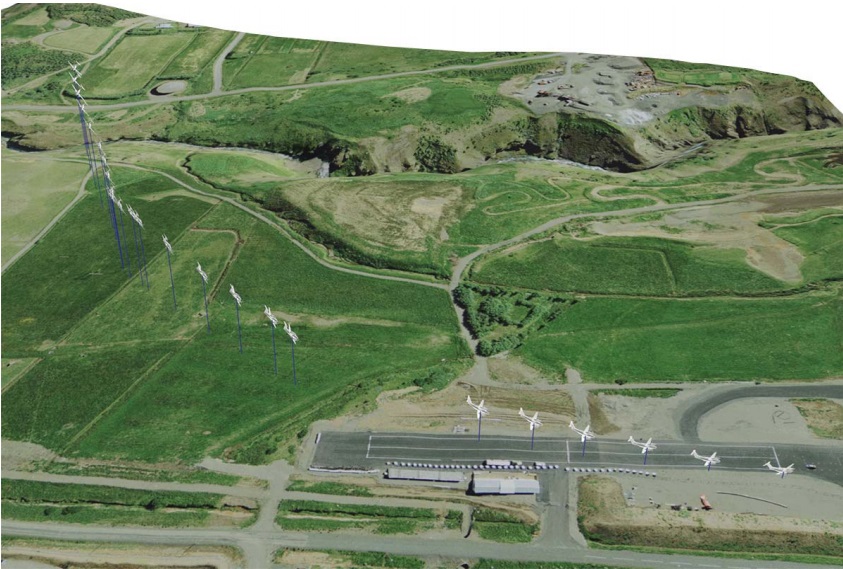 Using the analysis performed by TSB Canada…revealed that the bank angle in the turn was found to range from 60.4° to 72.9°. When the aircraft is flown at a steeper bank angle than 60°, it is considered to be an acrobatic manoeuvre by the manufacturer [and prohibited by the Pilot Operating Handbook (POH)].

According to the co-pilot’s statement, the aircraft was flown at approximately 200-220 knots IAS when approaching the racetrack area. By calculating the speed from the photogrammetric analysis, the first calculated aircraft speed was 217 knots (Ground Speed), increased to 240-260 knots during the turn and was close to 275 knots at the time of impact. 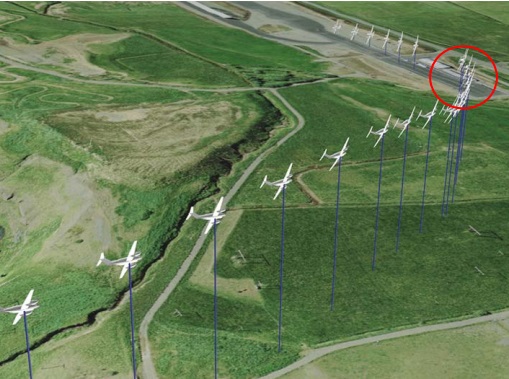 At approximately 150’ above the race track elevation, the bank angle increases from 54.2° and up to 72.9° [red circle on the image above] resulting in the aircraft losing altitude. To stop an aircraft from losing altitude in such attitude the correct action is to level the wings and then pull back on the controls. Otherwise, the harder the pilot pulls, the faster the aircraft loses altitude. The investigation revealed that prior to impact, the bank angle was decreasing from the maximum bank angle (72.9°) to 57.6° and the commander was most probably trying to correct the high sink rate and the steep bank, but given the low altitude the correction was initiated too late. Assuming that the turn was coordinated, the highest calculated G-load to the aircraft would be 3.4 G [in excess of the POH limit of 3.17 g]. This however shall be seen only as an estimate due to the fact that it is not known if the turn was coordinated.

On the Commander’s motivation the ITSB observe that he:

…had a personal connection with the race club, was familiar with club members on the ground and also intended to volunteer at the event after landing. The commander had been active in the race club for number of years and had an active role in planning and organizing the race event. The ITSB believes that [this] was a key motivator for the commander‘s decision to fly over the race track. If not for this personal connection to the activities and persons on the racetrack, the reason to execute the flyby would not have existed to the same extent.

They consider this association to be a distraction.  On Crew Resource Management (CRM) the ITSB comment:

There are indications that communication, planning and teamwork of the flight crew was not effective and that decision errors were made. According to the co-pilot’s statements, the communication between the commander and the co-pilot regarding the flyover was limited to a brief discussion that included the co-pilot mentioning at one time to the commander that they were a bit low and recommended a higher altitude. The commander increased the altitude momentarily to 1000 ft. Based on the final heading of the aircraft, before it collided with the racetrack, the ITSB believes that the commander intended to fly over and along the racetrack instead of flying a semi perpendicular track over the racetrack. The decision to bring their flight path further west of the airport, in response to the departing traffic from BIAR, placed the commander in a situation that in order to line up with the racetrack an excessive bank angle would be required that exceeded the manufacturer’s limitations.

The fact that the aircraft was in a descent, during the turn, while under high G-load, indicates that the commander’s attention was likely primarily focused out the cockpit’s windows and not on the aircraft’s instruments. If a pilot only relies on his senses, the risks of  increases, especially if the visual cues from ground, water, horizon and cloud formations are not clear. A high G-load may also contribute to spatial disorientation. A disoriented pilot with little or no acrobatic experience [like the aircraft Commander] would have tendencies to pull back on the controls as the aircraft starts to lose altitude during a steep turn. That leads to the aircraft pitching down and further increase in bank angle as well as the sink rate. Prior to the steep turn, the aircraft was flown in an area where the landscape slopes downhill along the flightpath. The focus of the commander was most probably on the racetrack area where the racetrack itself has a similar shape to an airport runway, but is smaller in size. After the steep turn the mountain area slopes against the flight path. This could lead to spatial disorientation for the commander such as giving the impression of being at a higher altitude than the actual altitude of the aircraft.

They go onto say the G-load would have hindered the response by a pilot with minimal aerobatic experience. On organisational culture, although the operator was explicit on compliance to procedures:

Flight crews often begin their careers with the operator by flying sightseeing tours and then making a transition to flying ambulance flights.

They imply that resulted in a more ‘flexible’ approach when flying without patients.

The commander was familiar with the racetrack where a race event was going on and he wanted to perform a flyby over the area. The flyby was made at a low altitude. When approaching the racetrack area, the aircraft’s calculated track indicated that the commander’s intention of the flyby was to line up with the racetrack. In order to do that, the commander turned the aircraft to such a bank angle that it was not possible for the aircraft to maintain altitude. The ITSB believes that during the turn, the commander most probably pulled back on the controls instead of levelling the wings. This caused the aircraft to enter a spiral down and increased the loss of altitude. The investigation revealed that the manoeuvre was insufficiently planned and outside the scope of the operator manuals and handbooks. The low-pass was made at such a low altitude and steep bank that a correction was not possible in due time and the aircraft collided with the racetrack. The ITSB believes that human factors played a major role in this accident. Inadequate collaboration and planning of the flyover amongst the flight crew indicates a failure of CRM. This made the flight crew less able to make timely corrections. The commander’s focus was most likely on lining up with the racetrack, resulting in misjudging the approach for the low pass and performing an overly steep turn. The overly steep turn caused the aircraft to lose altitude and collide with the ground. The co-pilot was unable to effectively monitor the flyover/low-pass and react because of failure in CRM i.e. insufficient planning and communication. A contributing factor is considered to be that the flight path of the aircraft was made further west of the airfield, due to traffic, resulting in a steeper turn. The investigation revealed that flight crews were known to deviate occasionally from flight plans.

Safety Actions by the Air Operator

Following the accident, the operator conducted an internal investigation and took the following steps:

Safety culture depend on more that just exhortations and procedures.  We discuss the topic further here: How To Develop Your Organisation’s Safety Culture Aerossurance has previously written about several accidents were culture played a part including:

Aerossurance is pleased to support for the third year running the Chartered Institute of Ergonomics & Human Factors’ (CIEHF) Human Factors in Aviation Safety Conference that takes place 13 to 14 November 2017 at the Hilton London Gatwick Airport, UK.

It will feature presentations and discussion on the latest research and practice in this ‘ultra-safe’ sector. The question we will look to answer is: How do we improve human performance in today’s aviation business?