As the list increased in excess of 40º, the ship lost steerage and propulsion, and subsequently drifted aground on Bramble Bank. A cargo shift as the ship listed resulted in a breach of the hull [caused by the tracks of a JCB excavator] and consequent flooding. MV Hoegh Osaka aground on the Bramble Bank in The Solent (Credit: MAIB)

One crewman broke an arm and a leg after falling more than 18m as the vessel healed over. The MAIB explain that:

All crew were safely evacuated from the ship and surrounding waters. There was no resulting pollution, and the ship was later successfully salvaged [by Svitzer Salvage under a Lloyd’s Open Form]. 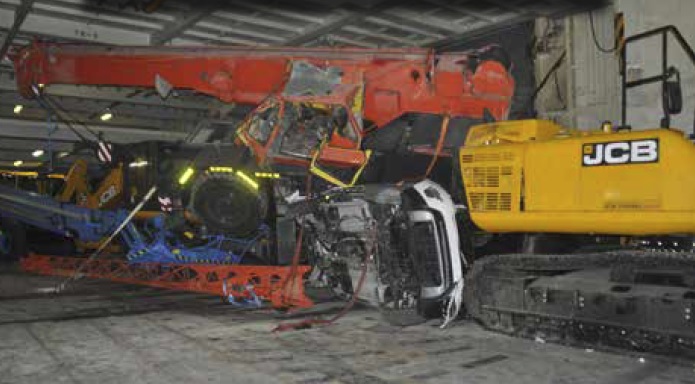 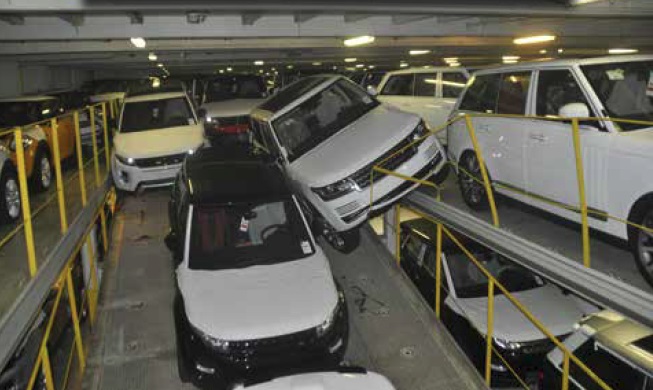 Stability modelling and analysis following the accident show that Hoegh Osaka listed heavily to starboard while turning around Bramble Bank as a result of having inadequate stability, which had not been identified prior to departure.

The MAIB however have identified “that the practice of not calculating a departure stability condition on completion of cargo operations and before a ship sails extends…to the [pure car carrier] PCC/PCTC sector in general”.

Why the Ship Listed

In a statement to the media, Steve Clinch, the UK’s Chief Inspector of Marine Accidents stated:

The MAIB’s investigation found that Hoegh Osaka’s stability did not meet the minimum international requirements for ships proceeding to sea. The cargo loading plan had not been adjusted for a change to the ship’s usual journey pattern and the number of vehicles due to be loaded according to the pre stowage plan was significantly different from than that of the final tally. The estimated weight of cargo was also less than the actual weight. 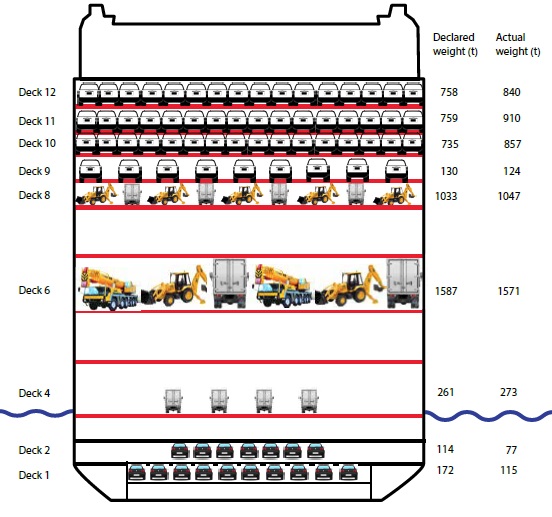 Crucially, the assumed distribution of ballast on board, bore no resemblance to reality, which resulted in the ship leaving Southampton with a higher centre of gravity than normal.

As is often the case in accidents, a late change in plan (due to New Year holidays) was critical in this accident. Southampton was originally to be the last of three port calls in NW Europe and stowage plans had been prepared on that basis.  When the itinerary changed, the loading plans were not (though the ship was not bunkered with fuel, further reducing stability) .

The cargo loaded in Southampton was loaded in the same location as it would have been had Southampton been the final loading port, not the first.

In fact the MAIB state in their report:

Although the chief officer advised the master that Hoegh Osaka’s GM [Metacentric Height] for departure was 1.46m and met the requirements of the loading and stability information manual, this advice was based on preliminary and, as it transpires, inaccurate figures. Given that the chief officer was re-entering the cargo figures into the loading computer as Hoegh Osaka was proceeding along Southampton Water, a thorough assessment of the ship’s stability had not been conducted prior to leaving the berth. Witness and anecdotal evidence suggests that this was a common practice and that final cargo figures were sometimes not received on board until after the ship had sailed.

Assessing a ship has adequate stability to sail and complete its intended voyage safely should be a fundamental element of ship operation that professional seafarers fully understand and implement. To enable this to be done properly and ensure the master is able to discharge his ultimate responsibility for the safety of his/her vessel, accurate updated cargo figures must be supplied to the ship with sufficient time made available for the ship’s crew to finalise a departure stability calculation before the ship sails.

As well as the loading, the ballasting was also critical, however all but the fore peak tank ballast gauges were unserviceable.

Wallem shore-based managers were aware that the ballast gauges were defective but had made no arrangements to have them repaired as manual soundings could still be taken and recorded.

In a telling indication of how an organisations can influence the behaviour of individuals:

Given the low priority given by Wallem to repairing the gauges, a similar level of priority was assumed by the chief officer. With no readily available means for monitoring the transfer of ballast during cargo operations, the chief officer resorted to estimating the amount of ballast transferred using a ‘time elapsed’ pumping rate calculation. He had done so with no adverse consequences since joining Hoegh Osaka 5 months previously, and therefore believed he knew with sufficient accuracy the quantity of ballast water in each tank.

To comply with requirement to record ballast sounding daily, the chief officer simply recorded his estimates, however the MAIB viewed these as having “no resemblance to reality”.  This is a classic sign of ‘drift’, adopting local practices and odds with published procedures and justifying them because ‘nothing went wrong last time’. The chief officer held a Certificate of Competence that had required him to demonstrate “a knowledge, understanding and proficiency in using stability, trim and stress tables, diagrams and stress-calculating equipment”.  However the MAIB say the value the chief officer placed on these skills had eroded over time.

Since 2009, he had served exclusively as an officer on car carriers, and this was both his second contract as chief officer and his second contract with Wallem, having joined Hoegh Osaka 5 months prior to the accident. During that period, he had become familiar with car carrier operations and, given that stability had not previously given him cause for concern, he was content to follow what had become a routine practice for a ship to sail before its departure stability condition had been accurately calculated.

So strong was the drift on Hoegh Osaka that despite indications of poor stability, notably the chief officer’s calculated GM being lower than he had expected, the list caused by raising the stern ramp being well in excess of that normally experienced [7º rather than the usual 2-3º], and the master’s interpretation that the ship did ‘not feel right’, no action was taken to delay Hoegh Osaka’s departure until an accurate stability condition had been calculated.

The chief officer had not been instructed in the use of the ship’s loading computer upon his familiarisation on joining the ship.  While he had (unlike the ship’s master) done the Wallem 2-day training course for senior officers appointed to vehicle carriers, “the need to accurately calculate a ship’s stability condition for departure and the forthcoming voyage did not feature in the topics covered”.

Procedures and guidance manuals were “comprehensive” but were in need of “reinforcement, particularly with regard to cargo reception and securing, ballast management, stability assessment, and communications between the port captain and ship’s staff”.  Wallem also had 5 checklists with a total 213 items for completion by the chief officer before departure:

Important checklist items, such as ensuring cargo was properly secured and that stability was properly assessed, were lost among a large number of minor tasks. Consequently, the value of the checklists as important safety tools was diminished.

These were not laid out in any intelligent task based process flow but appear to have become simply record sheets to ‘pencil whip’ afterwards. 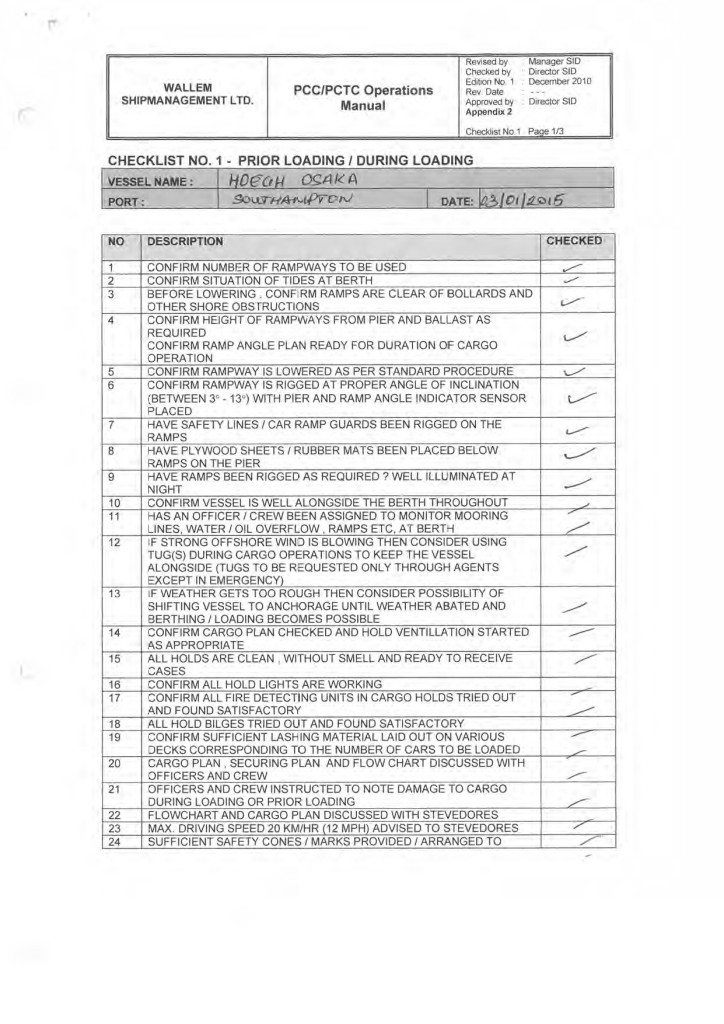 We have previously commented on procedural drift:

The MAIB also discuss a series of other accidents, including:

The MAIB has made recommendations to the Maritime and Coastguard Agency (2016/110), the Association of European Vehicle Logistics (2016/111) and the International Chamber of Shipping (2016/112) which seek to improve safety in this sector of the shipping industry.

This accident is a stark reminder of what can happen when shortcuts are taken in the interest of expediency. It is therefore imperative that working practices adopted by the car carrier industry ensure that there is always sufficient time and that accurate data is available on completion of cargo operations to enable the stability of such vessels to be properly calculated before departure. 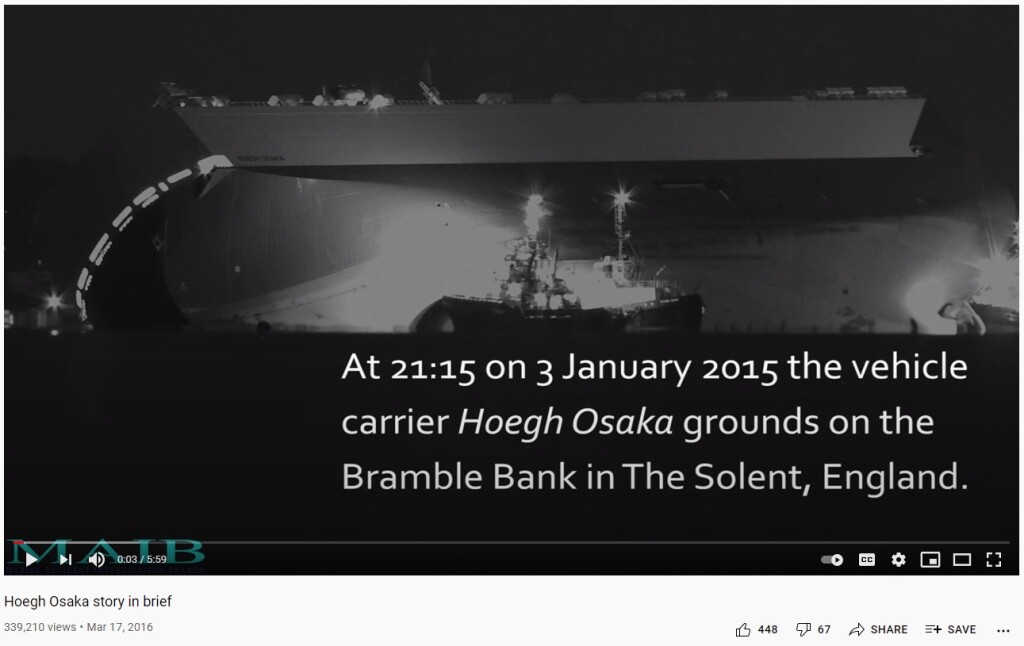 A safety flyer has also been produced by the MAIB summarising the accident and detailing the safety lessons learned.

In 2010 the UK Maritime and Coastguard Agency (MCA), supported by BP Shipping, Teekay Marine Services, and the Standard P&I Club, produced The Human Element:  a guide to human behaviour in the shipping industry  The MCA has also published: Leading for Safety

You may also be interested in this thoughtful piece that touches on the cultural effect of overly-compliance focused audits: Boxing and dancing – The challenges of enforcement in global shipping or our earlier article: Culpable Culture of Compliance?

According to the NTSB, the 656-foot-long Golden Ray began to heel rapidly to port during a 68 degree turn to starboard less than 40 minutes after leaving port. Despite attempts by the pilot and crew to counter the heel, the rate of turn to starboard increased, and the vessel reached a heel of 60 degrees to port in under a minute before it grounded outside of the channel. 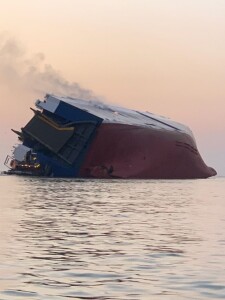 The NTSB determined the probable cause of the capsizing to be the chief officer’s error entering ballast quantities into the stability calculation program, which led to his incorrect determination of the vessel’s stability and resulted in the Golden Ray having an insufficient righting arm to counteract the forces developed during a turn while transiting outbound from the Port of Brunswick through St. Simons Sound.

Contributing to the accident was the vessel operator’s lack of effective procedures in their safety management system for verifying stability calculations.  The NTSB also concluded the Golden Ray did not meet international stability standards at departure and possessed less stability than the chief officer calculated.

According to the NTSB, after the vessel capsized, open watertight doors allowed flooding into the vessel, which blocked the primary egress from the engine room, where four crewmembers were trapped. Two watertight doors had been left open for almost two hours before the accident. No one on the bridge ensured that the doors were closed before departing the port.

Aerossurance has extensive safety management, safety leadership and safety analysis experience.  For safety advice you can trust, contact us at: enquiries@aerossurance.com