Technology has great potential to reduce aviation risk.  The European Helicopter Safety Team (EHEST) issued a study in October 2014 on the safety value of technology.

On 20 February 2014, the Federal Aviation Administration (FAA) issued an extensive package of changes to Parts 91, 120 and 135 to improve Helicopter Emergency Medical Service (HEMS) safety that includes a requirement for Helicopter TAWS (HTAWS). While the adoption of  HTAWS offers great potential safety benefit, its introduction, like any new technology, needs to be carefully considered.

It may be tempting to simply see the introduction of such equipment as an incremental improvement in safety and simply base introductory training, for example, on the avionic manufactures’ technical publications for the equipment.  However, there are wider potential impacts that need to be addressed when risk assessing the unintended consequences of introducing new technology.  For example reducing the risk of one accident type may heighten the risk of another unless additional mitigations are in place.

One example of this phenomena has been the introduction of flight deck automation, the subject of a July 2014 the Royal Aeronautical Society Rotorcraft Group conference, Technology: Friend or Foe? which we discussed in a previous article.  A US HEMS accident in 2013 highlights an unintended consequence of HTAWS introduction.

On 22 October 2013, Airbus Helicopters AS350B3e helicopter N353HW, operated by the Memphis Medical Center Air Ambulance Service (doing business as Hospital Wing) was 18 minutes into positioning flight to collect a patient for an inter-hospital transfer, when it crashed near Somerville, Tennessee at 06:05 local time.  There was a post crash fire (a subject Aerossurance has discussed recently).  All three persons on board died.

Two calls had been turned down during the night due to poor weather.  At an airport about 2 miles from the accident site, a few clouds were observed at 800 feet agl, and a broken ceiling existed at 1,200 feet agl.  As well as Garmin GNS530W TAWS the helicopter was equipped with Night Vision Goggles (NVGs) but was not equipped for operation under Instrument Flight Rules (IFR). In there final report the US National Transportation Safety Board (NTSB) state:

…the helicopter was observed in a climb and in a right turn away from the observed course. The last data point indicated that the helicopter was on a course of 146 degrees and at 98 knots ground speed and at an altitude of 1,560 feet above mean sea level (msl) or about 1,116 feet above ground level (agl). A review of the helicopter’s ground track revealed two obstacles in the immediate vicinity, an unlit, nonoperational cellular tower, 140-feet tall, and a water tower, about 115-feet tall. Although recorded HTAWS data was not available, research and flight testing revealed that the pilot may have received an in-flight obstacle alert, prompting a climb. Considering the low clouds and night conditions that probably existed along the last segment of the flight’s track, it is likely that the pilot initiated a climb and inadvertently entered instrument meteorological conditions, where a loss of helicopter control occurred.

The pilot’s inadvertent encounter with night, instrument meteorological conditions while responding to an obstacle alert, resulting in an in-flight loss of helicopter control.

The pilot was described by colleagues as “good pilot”, “well-liked” and “conscientious”. He flew “by the book,” did not “press” the weather and used the operators risk assessment tools.  The operator did commendably include inadvertent entry to IMC simulator training.  It is not however clear if the operator had recognised that while TAWS and NVG (for example) would reduce the risk on many flights, they would allow more marginal high risk flights to be attempted.

A Prior Hospital Wing Accident

The same operator had a prior accident in 2010.  AS350B3 N855HW crashed in bad weather killing the three persons on board on a return positioning flight.  There was a post crash fire. That aircraft was also equipped with TAWS (a Honeywell EGPWS) although the NTSB were not able to examine its performance as it was destroyed in the fire. 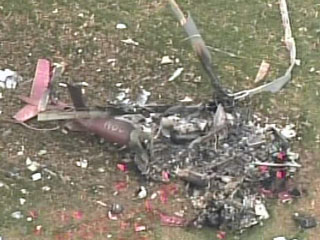 That aircraft was fitted with an Avidyne FlightMax EX500 multifunction moving map display that could be configured to depict weather information. The unit could receive satellite broadcast XM WX Satellite Weather information, including Next Generation Radar (NEXRAD) Doppler weather radar and lighting strike data.  Its not clear how the pilot used that capability, if at all. However the NTSB did note that fatigue was likely to have affected the pilot’s decision making.

We have previously written a number of articles on US HEMS safety including:

UPDATE 13 April 2017: The Irish Air Accident Investigation Unit (AAIU) has issued its preliminary report into the loss of Sikorsky S-92A EI-ICR operated by CHC, for the Irish Coast Guard as Rescue 116 at Black Rock off the coast of County Mayo on 14 March 2017.  The SAR helicopter impacted the 300ft high Black Rock island , close to a lighthouse, on a night approach to a refuelling site on the mainland.  The helicopter was fitted with a Honeywell MK XXII Enhanced Ground Proximity Warning System (EGPWS) with modified software for SAR profiles.  However, the AAIU reveal that:

Aerossurance has extensive helicopter safety, operations, airworthiness and accident analysis experience.  For aviation advice you can trust, contact us at: enquiries@aerossurance.com