The Commander’s total flying experience was 7,457 flying hours, including 3,950 hours as a copilot and 1,173 hours as a commander on the B777.  The Copilot’s total flying experience was 7,957 flying hours, including 1,292 as a copilot on the B777.  Both pilots had performed go-around and missed approach exercises during their training and had performed one normal go-around as pilot flying on the B777 each within 4 months prior to this flight.

AAIS explain that on arrival at Dubai the Aircraft Commander attempted to perform a within-limits tailwind manual landing during forecast moderate windshear.

During the landing on runway 12L at OMDB the Commander, who was the pilot flying, decided to fly a go-around, as he was unable to land the Aircraft within the runway touchdown zone. The go-around decision was based on the perception that the Aircraft would not land due to thermals and not due to a windshear encounter. For this reason, the Commander elected to fly a normal go-around and not the windshear escape maneuver. The flight crew initiated the flight crew operations manual (FCOM) Go-around and Missed Approach Procedure and the Commander pushed the TO/GA switch. As designed, because the Aircraft had touched down, the TO/GA switches became inhibited and had no effect on the autothrottle (A/T).

The flight crew were not aware a 6 second touch down had occurred.

After becoming airborne during the go-around attempt, the Aircraft climbed to a height of 85 ft radio altitude above the runway surface. The flight crew did not observe that both thrust levers had remained at the idle position and that the engine thrust remained at idle.

The Aircraft quickly sank towards the runway as the airspeed was insufficient to support the climb. As the Aircraft lost height and speed, the Commander initiated the windshear escape maneuver procedure and rapidly advanced both thrust levers. This action was too late to avoid the impact with runway 12L.

Eighteen seconds after the initiation of the go-around the Aircraft impacted the runway at 0837:38 UTC and slid on its lower fuselage along the runway surface for approximately 32 seconds covering a distance of approximately 800 meters before coming to rest adjacent to taxiway Mike 13. 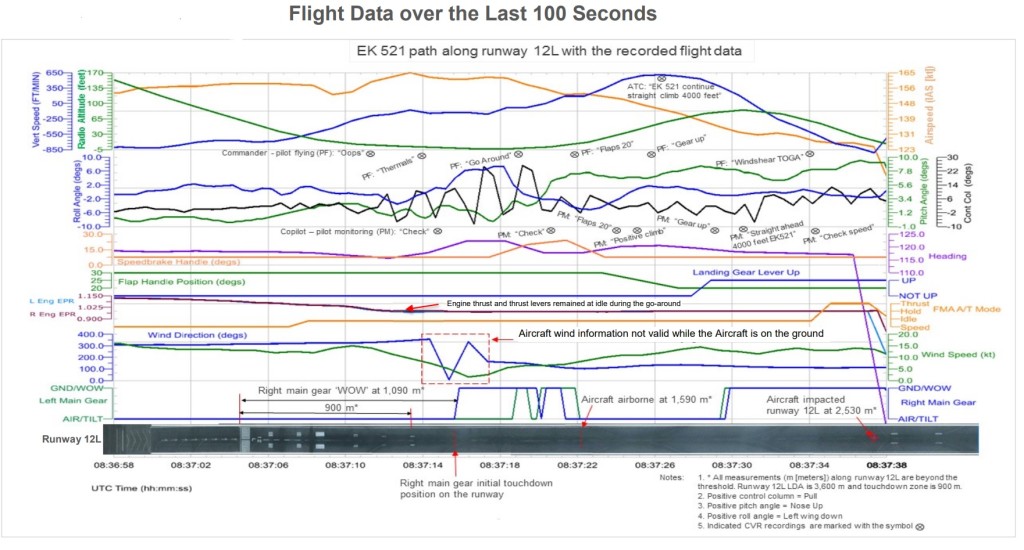 The B777 remained intact but ” several fuselage mounted components and the No.2 engine/pylon assembly separated”. 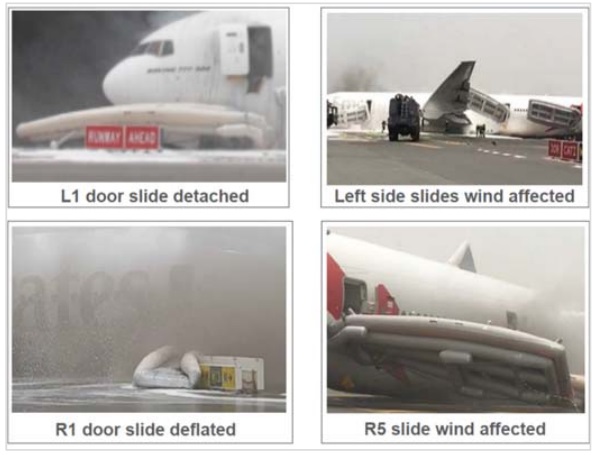 Many passengers evacuated the Aircraft taking their carry-on baggage with them. https://youtu.be/jHhmw4xy1mY

Except for the Commander and the senior cabin crewmember…all of the other occupants evacuated via the operational escape slides in approximately 6 minutes and 40 seconds.

This is considerably beyond the 90 second certification target. 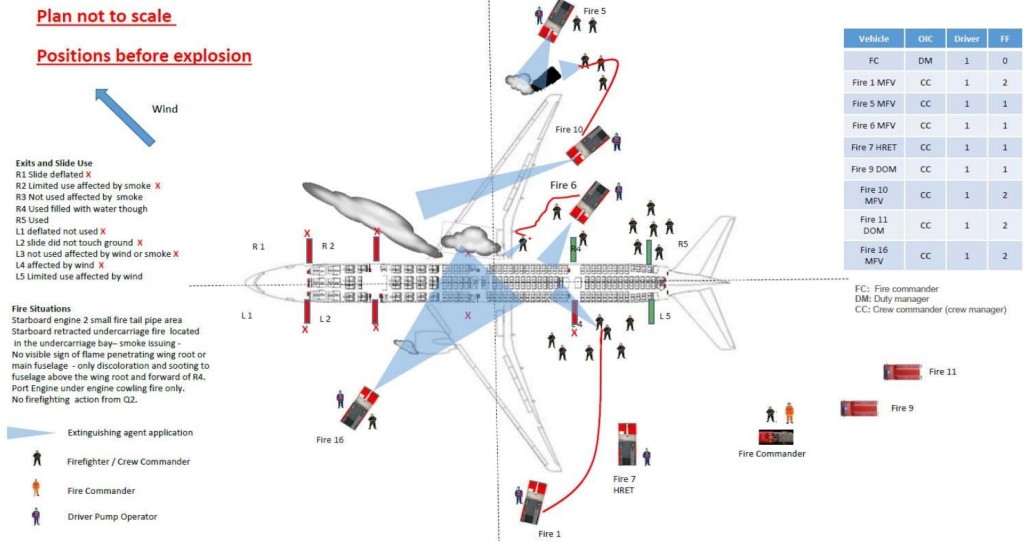 Approximately 9 minutes and 40 seconds after the Aircraft came to rest, the center wing tank exploded… 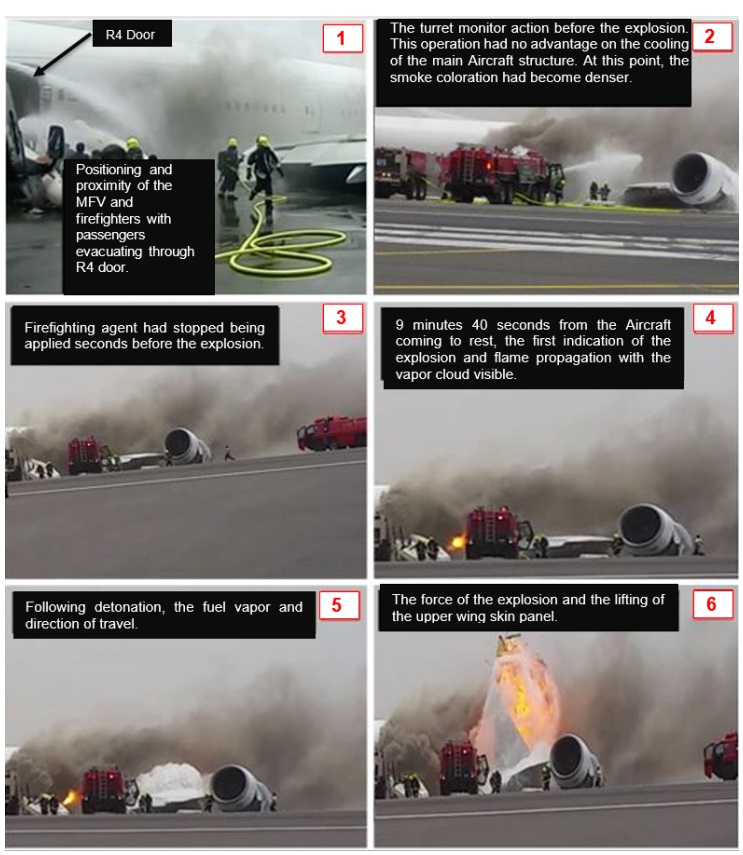 …which caused a large section of the right wing upper skin [below] to be liberated.

As the panel fell to the ground, it struck and fatally injured a firefighter.

The Aircraft was eventually destroyed due to the subsequent fire.

Emirates’ policy, in line with Boeing’s recommendations, is for pilots to use autothrottle for all phases of flight including normal go-around.   Of note is that the crew did not perceive that the main landing gear had contacted (changing AT mode) and their minimal training and experience in flying go-arounds in that specific circumstance meant they did not recognise that the thrust remained at idle.  The investigators note the airline training programme was based on Boeing’s FAA approved training scheme which “did not include” the inhibition logic.   The inhibit logic characteristics for the go-around switches were therefore “not clearly demonstrated” to pilots.

Emirates has modified its training since the accident to reinforce training for go-around after touchdown and include information on the inhibit logic.  They have also been liaised with Boeing to develop “engineered defences” to alert the crew when a go-around switch is pushed during an inhibited phase.

…based on heightened industry concerns about loss of control during high energy go-arounds, as documented by the Flight Safety Foundation and the United Kingdom Civil Aviation Authority (UK CAA), the Operator’s Group Safety Department conducted a safety review of FDM recorded go-arounds. The review revealed occasional instances of noncompliance with standard operating procedures, which included landing gear retraction prior to flap selection, and occasional instances of altitude deviations when go-arounds were flown without having the missed approach altitude pre-set, which led to the aircraft exceeding the intended altitude. The safety review results were presented and discussed by the Training Review Committee in January 2014. Following this, all engines operating go-arounds for various reasons and from various altitudes were introduced into several flight crew-training modules. Related flight crew information regarding mishandled go-arounds was also published in the Operator’s flight safety publication in May 2014. The Investigation believes that predictions of a multi-layered failure of the safety net are a challenge for a safety management system. However, some factors and recommendations pertinent to the…Accident were present within the industry but were not analyzed in context with thrust verification due to the absence of a reference event. It is therefore believed that the key to a proactive SMS is a coordinated and structured data sharing initiative within the industry, spearheaded by the aircraft manufacturers. This Accident could potentially lead to a set of identified precursors being shared within the industry, to be adopted and monitored by individual airlines’ FDM programs.

(a) During the attempted go-around, except for the last three seconds prior to impact, both engine thrust levers, and therefore engine thrust, remained at idle. Consequently, the Aircraft’s energy state was insufficient to sustain flight.

(b) The flight crew did not effectively scan and monitor the primary flight instrumentation parameters during the landing and the attempted go-around.

(c) The flight crew were unaware that the autothrottle (A/T) had not responded to move the engine thrust levers to the TO/GA position after the Commander pushed the TO/GA switch at the initiation of the FCOM ̶ Go-around and Missed Approach Procedure.

(d) The flight crew did not take corrective action to increase engine thrust because they omitted the engine thrust verification steps of the FCOM ̶ Go-around and Missed Approach Procedure.

(a) The flight crew were unable to land the Aircraft within the touchdown zone during the attempted tailwind landing because of an early flare initiation, and increased airspeed due to a shift in wind direction, which took place approximately 650 m beyond the runway threshold.

(b) When the Commander decided to fly a go-around, his perception was that the Aircraft was still airborne. In pushing the TO/GA switch, he expected that the autothrottle (A/T) would respond and automatically manage the engine thrust during the go-around.

(c) Based on the flight crew’s inaccurate situation awareness of the Aircraft state, and situational stress related to the increased workload involved in flying the go-around maneuver, they were unaware that the Aircraft’s main gear had touched down which caused the TO/GA switches to become inhibited. Additionally, the flight crew were unaware that the A/T mode had remained at ‘IDLE’ after the TO/GA switch was pushed.

(d) The flight crew reliance on automation and lack of training in flying go-arounds from close to the runway surface and with the TO/GA switches inhibited, significantly affected the flight crew performance in a critical flight situation which was different to that experienced by them during their simulated training flights.

(f) The Operator’s OM-A policy required the use of the A/T for engine thrust management for all phases of flight. This policy did not consider pilot actions that would be necessary during a go-around initiated while the A/T was armed and active and the TO/GA switches were inhibited.

(h) The Aircraft systems, as designed, did not alert the flight crew that the TO/GA switches were inhibited at the time when the Commander pushed the TO/GA switch with the A/T armed and active.

(i) The Aircraft systems, as designed, did not alert the flight crew to the inconsistency between the Aircraft configuration and the thrust setting necessary to perform a successful go-around.

(j) Air traffic control did not pass essential information about windshear reported by a preceding landing flight crew and that two flights performed go-arounds after passing over the runway threshold. The flight crew decision-making process, during the approach and landing, was deprived of this critical information.

(k) The modification of the go-around procedure by air traffic control four seconds after the Aircraft became airborne coincided with the landing gear selection to the ‘up’ position. This added to the flight crew workload as they attentively listened and the Copilot responded to the air traffic control instruction which required a change of missed approach altitude from 3,000 ft to 4,000 ft to be set. The flight crews’ concentration on their primary task of flying the Aircraft and monitoring was momentarily affected as both the FMA verification and the flight director status were missed.

Forty recommendations are made in the final report.  They include one that FAA, with Boeing, studies to enhancing the 777 autothrottle system and go-around inhibit logic and another that flight crew manuals should have the significance of the inhibit logic “appropriately” highlighted.

In addition to actions identified in the Final Report, Emirates has also proactively taken the appropriate steps to further enhance our operating procedures based on our own internal investigation, as well as on a thorough review of the Preliminary Report and Interim Report. These actions were taken in conjunction with our regulator, the UAE GCAA. It is a positive validation of our robust internal process that the majority of our own findings and recommendations are included in the final report.  …we are committed to the continuous review and improvement of our operations.

Note: All graphics are from the AAIS report.