The US National Transportation Safety Board (NTSB) has released preliminary information on a fatal accident involving Bell 206B N978RH of Republic Helicopters off the coast of Galveston Island, TX on 6 February 2017:

This was the helicopter’s third flight of the day. It departed 2TE1 at 1404 and flew to the oil tanker Eagle Vancouver and landed at 1457. The two passengers, both employees of Societe Generalde Surveillance (SGS) deplaned and commenced their work on the tanker.

Hence, the return flight was at night and also breeched industry guidance to schedule landing 30 minutes prior to sundown.

The last radio communication from the pilot to Republic Operations was at 1906, when he reported he had the lights of Galveston in sight. The helicopter was equipped with a Blue Sky Global Positioning System (GPS) tracking system. The last data point from the Blue Sky system was at 1906…about .27 miles from the Galveston Island coastline. Altitude was 494 feet and speed was 127 mph. The accident site was…in West Bay, between Galveston Island and the mainland, or 4.30 miles from the last data… 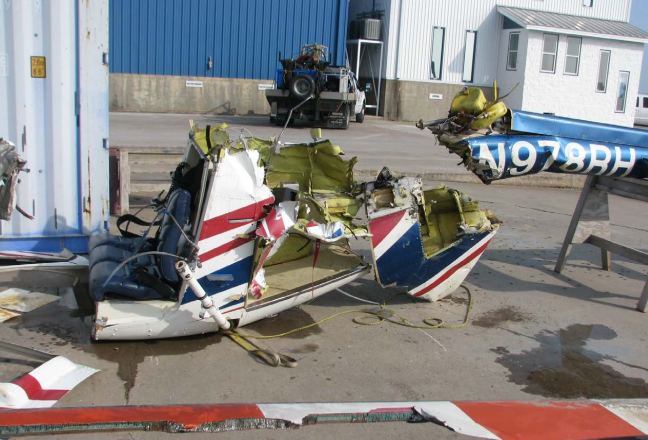 Instrument meteorological conditions (IMC) prevailed at the time of the accident.

Despite one of its Bell 230s suffering a blade strike on the deck of a vessel in 2011, Republic still boasts of an accident free record (and that their pilot maintain instrument currency) on their website (as downloaded today): 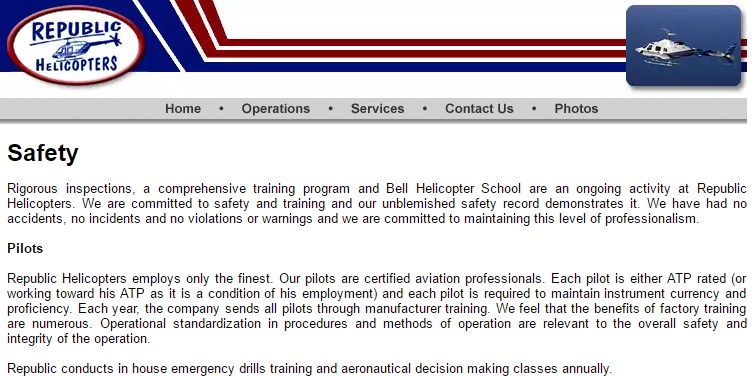 UPDATE 11 December 2017: The NTSB determined the probable cause as follows:

The pilot’s failure to recognize the flight had encountered instrument meteorological conditions at night, which resulted in an unrecognized descent and collision with water.

The helicopter was equipped with a GPS SkyRouter fast tracking system that reports the helicopter’s position every 2 minutes. The last data point received from the GPS SkyRouter system was at 1906, when the helicopter was about 0.27miles from the Galveston Island coastline at 494 feet and 127 mph. Republic Helicopters An “Inactive” signal was received from the Blue Sky GPS by Republic Helicopters Operations 10 minutes after this last contact, or 1916, and the U.S. Coast Guard was alerted. Based on time and distance from the last data point to the accident location with an approximate helicopter speed of 120 mph, the time of the accident was computed to be 1909

…the moon was “Waxing Gibbous with 78% of the Moon’s visible disk illuminated. The moonlight would have likely been visible above the cloud tops. Below 3,000 feet near the accident site at the accident time would have been instrument meteorological conditions with no moonlight visible.” [Full weather report]

The helicopter was recovered from West Bay on February 8, 2017, by T&T Marine Salvage, Inc [who] reported the water depth at the accident site was approximately 7 to 8 feet, and all recovered wreckage was found in a radius of 80 to 100 feet. 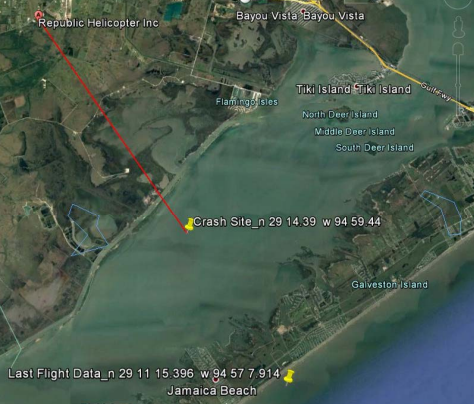 The pilot and right rear seat passenger were both seriously injured and were found by the U.S. Coast Guard approximately one hour after the accident, clinging to a section of fuselage.

The pilot had sustained stomach and intestinal trauma, several lumbar fractures, and abrasions on his shoulders, consistent with rubbing of the shoulder harness. The left front seat passenger was fatally injured and was found about 100 meters from the wreckage.

The company did express concern on “the lengthy time frame for the Coast Guard to respond once the organization had implemented the its missing aircraft procedure in accordance with their emergency response plan”.  However, recoverer 1 hour after the accident is not bad at night.

In his NTSB interview the pilot explained:

..he did not recall any anything else until he realized he was submerged in water and was attempting to release himself from his safety belt; he indicated that it took more than one attempt to release the safety belt and then he went to the surface of the water.

Eventually they noticed a searchlight on the surface of the water from an approaching boat, at which time they were rescued from the water and taken to the shore.

Historically, about two-thirds of all general aviation (GA) accidents that occur in reduced-visibility weather conditions are fatal. These accidents typically involve pilot spatial disorientation or controlled flight into terrain.

We previously wrote: So You Think The GOM is Non-Hostile?