This is a particularly topical development after the completeness of terrain databases was raised as a concern in the Irish Air Accident Investigation Unit (AAIU) preliminary report into the loss of Sikorsky S-92A EI-ICR, operated by CHC for the Irish Coast Guard as Rescue 116, at Black Rock off the coast of County Mayo on 14 March 2017.

At the 2003 FAA/JAA International Conference, it was agreed that an improved control of data held in aircraft navigational databases is essential as an enabler to support the implementation of the Performance-Based Navigation (PBN).

Through Opinion No 01/2005, EASA offered the industry, via guidance material to Part 21, a voluntary quality system leading to the issue of a Letter of Acceptance (LOA) by the Agency to the European database suppliers.  As the Opinion noted:

The letter of acceptance will not attest that the data produced by these organisations can be used by operators, but that the organisation [the LOA holder] has put in place an appropriate quality system for the control of the processing of data. This will ease the obligation on the operator to do the same control and facilitate the issuing by the national competent authorities of the approval for the operators to fly in dedicated airspace where reduced separations are implemented.

The final responsibility for the approval of operators for P-RNAV operations remains with the National authorities.

There is no obligation on operators to buy their data only from organisations holding the letter of acceptance.  Operators can either make the verifications themselves or use another competent organisation for this purpose and convince directly their responsible authority that they can be allowed to fly in P-RNAV airspace.

The decision whether or not to apply for an EASA letter of acceptance is therefore entirely up to the navigation database supplier concerned.

This introduced two types of LOA:

In 2009, EASA’s remit was extended to ATM/ANS and this included a regulatory task to further address aeronautical information and data, hence this further work.  Following the preparations started in 2009, on 1 March 2017 Commission Implementing Regulation (EU) 2017/3736 was adopted for common requirements for providers of Air Traffic Management (ATM) / Air Navigation Services and other ATM network functions and their oversight.  Note: This also repealed (EU) 2016/1377 that had been ‘accidentally’ prematurely published prior to the completion of translation into all EU languages.

On that matter of aeronautical data (EU) 2017/3736, following submission by EASA of Opinion No 02/2015 to the European Commission and Rule Making Task RMT.0593, replaces the previous voluntary LOA concept with a formal certification scheme for Data Services (‘DAT’) providers (“services consisting in the origination and processing of data and formatting and delivering data to general air traffic for the purpose of safety-critical air navigation”) from 1 January 2019.

EASA held a workshop for DAT providers on 10 November 2016 to brief the forthcoming arrangements. 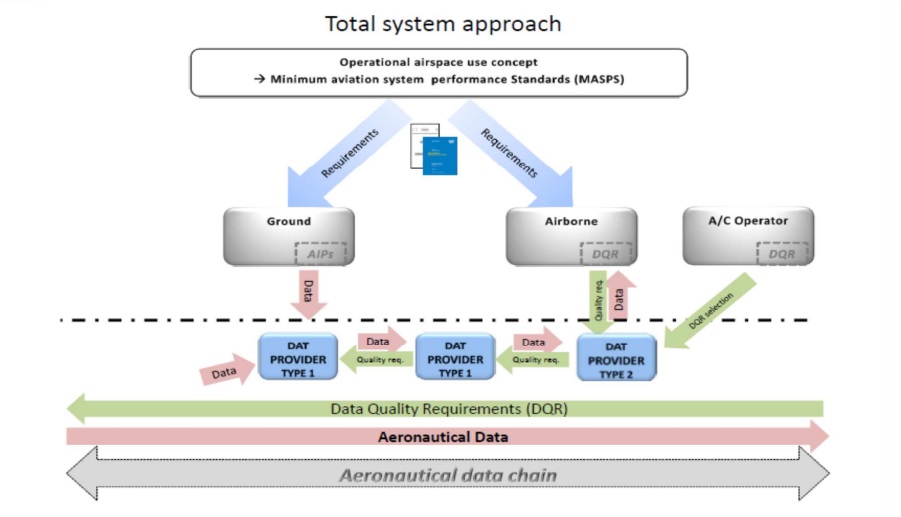 These new EDs addresses implementation issues related to the provision safety-critical air navigation data to airspace users.  They follow NPA 2014-20 (which resulted in 410 comments from ~30 parties).

EASA acknowledge “the importance of correct data and information being fed into the airborne system” and highlight “that the lack of such correct data could lead to significant safety risks for a flight”.  The specific objectives of the rule-making are to:

The changes are expected to support the implementation of performance-based navigation (PBN) throughout the European Union and provide for cost-effectiveness through the reduction of regulatory burden on aircraft operators and on the competent authorities performing their oversight at national level.

The changes will apply from 2019, and the amendments to the associated acceptable means of compliance (AMC) and guidance material (GM) to Commission Regulation (EU) No 965/2012 as regards the management of aeronautical databases (discharging aircraft operators from their data suppliers auditing obligation) will be issued through a separate Decision.

However, Commission Implementing Regulation (EU) 2017/373 laying down common requirements for providers of air traffic management (ATM)/air navigation services (ANS) and other ATM network functions and their oversight allows data services (DAT) providers, on a voluntary basis, to apply for, and be granted, the relevant certificates immediately upon the entry into force of said Regulation. Thus, this Decision is providing operators the possibility to also use certified DAT providers before the applicability date of the new provisions.

We have previously discussed defects in aeronautical data: BA Changes Briefings, Simulator Training and Chart Provider After B747 Accident

UPDATE 4 May 2017: Readers interested in the safety aspects of data may find this document of use: Data Safety Guidance written by the Data Safety Initiative Working Group

Data, as distinct from software and hardware, has been a contributing factor in many accidents and incidents. The inclusion of data as a potential cause of harm is a crucial part of a thorough system safety assessment. This book has been developed by the Safety Critical Systems Club Data Safety Initiative Working Group (DSIWG) to provide guidance on how data should be managed in a safety-related context.

UPDATE 31 May 2017: The US National Transportation Safety Board (NTSB) commented on TAWS database and software issues after the loss of de Havilland DHC-3 Otter floatplane, N270PA in a CFIT in Alaska and the loss of 9 lives: All Aboard CFIT: Alaskan Sightseeing Fatal Flight

UPDATE 29 December 2017: The final report is released on an ATR42 accident in Indonesia where the EGPWS did not warn prior to a CFIT.  Although the investigators suspect the circuit breaker of the EGPWS had been pulled to prevent false warnings, investigators note that the destination, Oksibil Airport, “was not provided with the high-resolution terrain data in the database version installed on the accident aircraft’s EGPWS”.

As the aircraft drew nearer to the runway, the flight crew received an obstacle proximity warning, since their projected approach path would bring them too close to a tower. In response, the crew conducted a missed approach and instead landed the aircraft on runway 05. No damage or injuries were sustained.

The terrain database installed on the EGPWS unit had the height of the tower as 1,325 ft, which was the height of 1,316 ft on the approach chart rounded up to the nearest 25 ft.

The correct height of the tower was subsequently found to be 1,365 ft and the chart has since been amended. The EGPWS database, however, had not been amended at the time of completion of this report. Had the EGPWS unit had the correct tower height (1,365 ft), it still would have generated the same alert and warning.

Airservices Australia advised that the height error was due to corruption of an obstacle database.

Honeywell advised that the database update is on hold pending ‘further conversations with Airservices Australia and QantasLink to verify that the amended tower height, combined with any Runway 30 approach angle changes, would not result in nuisance EGPWS obstacle alerts and warnings.’

UPDATE 14 January 2020: Mapping data was a topic discussed in the Accident Investigation Board Norway (AIBN) report into a fatal HEMS wirestrike on this day in 2013.