On 22 December 2013, BA  G-BNLL sustained substantial damage when its right wing hit a building while taxying at Johannesburg-O.R. Tambo International Airport (JNB). Four people in the building were injured by flying debris. 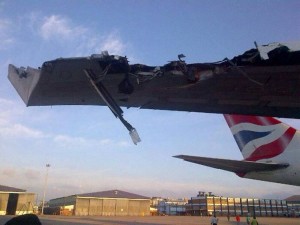 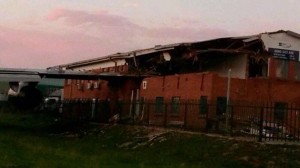 The crew had originally expected that they would be using a different route after pushback (another example of the risks of late changes in plan which we have recently written about).

The South African Civil Aviation Authority (SA CAA) summarise the Captain’s statement in their report (South Africa does not have a separate air accident investigation body but does have an separate department within the CAA): 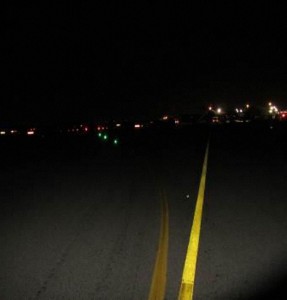 The SACAA concluded that the cause was:

The loss of situational awareness caused the crew to taxi straight ahead on the wrong path, crossing the intersection/junction of Bravo and Mike instead of following Bravo where it turns off to the right and leads to the Category 2 holding point. Following aircraft stand taxilane Mike; they collided with a building on the righthand side of Mike.

The crew did not conduct a briefing to discuss the cleared route, nor did they refer to the correct taxiway information in chart 10-6. In combination with the ground movement visual aids, this created confusion and loss of situational awareness when taxiing on taxiway Bravo.

The SA CAA raised 10 recommendations, which did include important recommendations on airport markings/lighting and their inspection by the SA CAA.  Two recommendations were directed to the UK Air Accidents Investigation Branch (AAIB).  These however were picked up by UK CAA and the subject of FACTOR F4/2015:

…AAIB enter into consultations with the operator (British Airways) about the crew’s non-adherence to applicable briefing and taxi policies, procedures and requirements. The AAIB to communicate to AIID what the appropriate corrective action shall be to prevent recurrence.

The UK CAA report that a new training package, including simulator exercises, has been designed and delivered to all BA crews.

The package, designed by the Human Factors Standards Group (HSFG) in conjunction with fleet Training Standards Captains (TSCs) from a variety of BA fleets, consists of a non type specific human factors briefing that discusses decision-making and change identification.

This is followed by Full Flight Simulator exercises to put into practice the human factors briefing. The briefing, which takes approximately 10 minutes to complete, encourages crews to associate change with new threats, but also discusses the various levels of Situational Awareness in language which crew understand and are used to, i.e., ‘Notice’, ‘Understand’ and ‘Think Ahead’.

The training advises crews to brief the most likely occurrence(s) for clarity, to re-brief when change has been identified and that they should allocate sufficient time for any re-briefing, requesting a ground or air hold if necessary.  The simulator exercise occurs “on the training day of a two day simulator recurrent check/refresher”.

…AAIB look into or address the matter of the revision status of the aeronautical data issued by the third party service provider referencing the issues raised of Navtech. It should be noted that the South African AIP [Aeronautical Information Publication] is a legal document prepared in accordance with the Standards and Recommended Practices (SARPs) of ICAO Annex 15 of which the charts contained in it are produced in accordance with ICAO Annex 4. Its purpose is to provide appropriate safety information (i.e. aeronautical data) to the aviation industry; therefore operators are to ensure that the aeronautical data they use, irrespective of the source, complies with the information published in the South African AIP.

The UK CAA report that BA implemented an audit programme “that included an in-depth assessment of the chart supplier’s quality assurance system”.  This appears to have resulted in adverse findings:

As a consequence of this, British Airways has changed their chart supplier. This [new audit] process has been incorporated into an audit schedule, which is being applied to new chart providers. As a further quality check, crews are required to report a charting discrepancy, should they notice it. In light of these measures, the UK CAA is satisfied that the aeronautical data used by BA will comply with the information published in the South African AIP.

No comment is made on any wider systemic action being taken by CAA.  However, Aerossurance notes that other operators would be well advised to review their assurance of navigation data providers and encourage reporting of any anomalies spotted by crews.  We are aware of a UK airport took the initiative to compares the UK AIP with several independent chart providers’ products after an incident and identified a number of anomalies.

UPDATE 10 December 2015: The UK Air Accidents Investigation Branch (AAIB) published their report into an EasyJet Airbus A319 that overflew a ridge at 488ft after losing awareness of their position while attempting a visual night landing at Bristol in May 2015.  The AAIB state that the crew did not update their landing brief following a runway change.  Consequently the First Officer was not fully aware of the Captain’s plan for flying the visual approach and not properly able to monitor it.  The AAIB noted that that the crew did not set the missed-approach altitude until after the go-around commenced, suggesting the landing checklist had not been satisfactorily completed.

Aerossurance has extensive air safety, audit, human performance and accident investigation experience.  For aviation advice you can trust, contact us at: enquiries@aerossurance.com