On 26 February 2019 Airbus Helicopters EC135T1 VP-CPS of the Royal Cayman Islands Police Service (RCIPS) was damaged on take off at Owen Roberts International Airport, in the Caribbean Cayman Islands. The RCIPS Air Operations Unit (AOU) was formed in March 2010 with VP-CPS, a 1999 EC135 that had previously served with the East Midlands Air Support Unit as G-EMAS.  VP-CPS was withdrawn from service after the accident.  RCIPS now have two H145s.

…the pilot lifted the helicopter to a height of approximately 4 feet…and felt the cyclic control stick shake and then a strong rearwards force, which he was unable to overcome. The pilot immediately lowered the collective lever, landing heavily, and moved both throttle twist grips to idle, switched off the engines and applied the rotor brake. A maintenance team arrived at the helicopter and found damage to the landing gear, tail boom, Fenestron shroud and the transmission deck.

The main rotor swashplate is moved in the lateral, longitudinal and collective axes by three hydraulic actuators and together they comprise the Main Rotor Actuator (MRA).  Further investigation revealed that the tie bar of the longitudinal axis actuator had broken near the fork end. 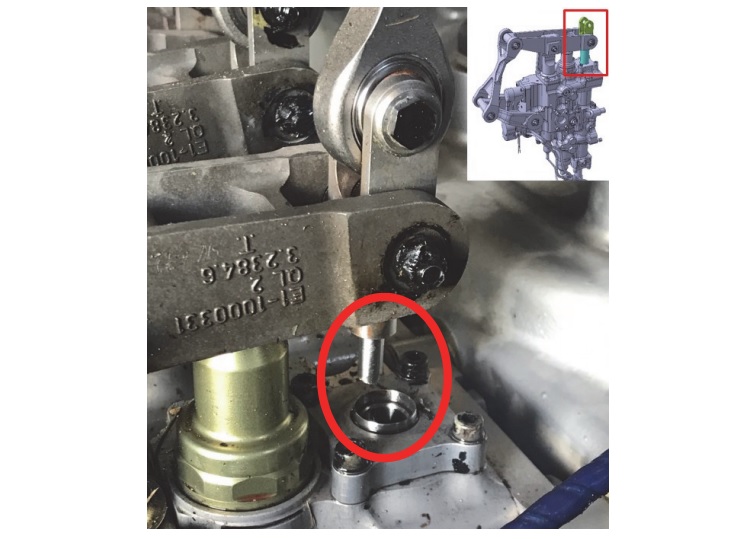 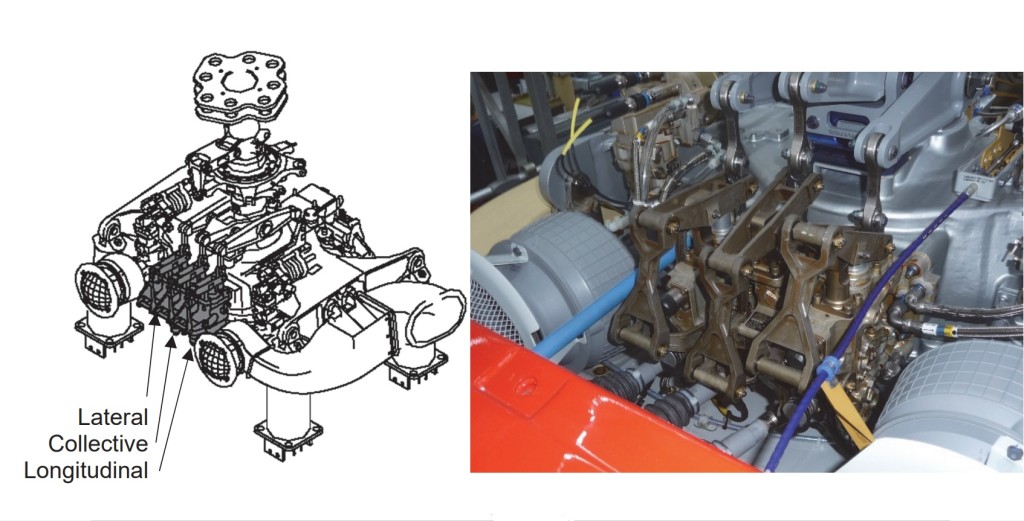 Inside each individual actuator are two axial pistons, one per hydraulic system, which are linked with a tie bar.  This bar is manufactured from passivated, high-strength, corrosion-resistant steel, and attached to a fork end which connects to the swashplate linkage.

To enable actuator replacement without swashplate linkage adjustment, the length of the actuator is controlled to +/- 0.1 mm by selection and fitment of a pair of compression ring segments with the appropriate length.

The MRA was removed from for examination.

The overall external condition was typical for the equipment, which had completed 18 years in service and 6,561 flying hours. The lateral and longitudinal axis tie bars had been replaced in 2005 after 576 flying hours, due to damaged threads. The tie bar of the longitudinal axis actuator had fractured approximately 30 mm from the end attached to the fork fitting, where the cross-section changes for an ‘O-ring’ seal.

Analysis of the material found adjacent to the fracture on the tie bar revealed a high sodium and chlorine content, amongst other chemical elements, with similar deposits found on the other actuator tie bars. 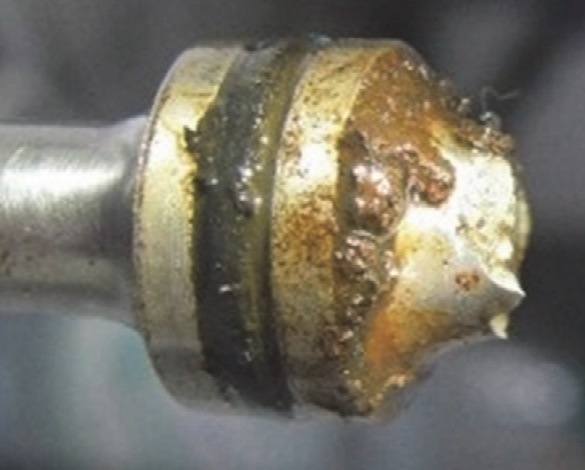 There was evidence of the same material on the part of the fork end located within the upper piston. 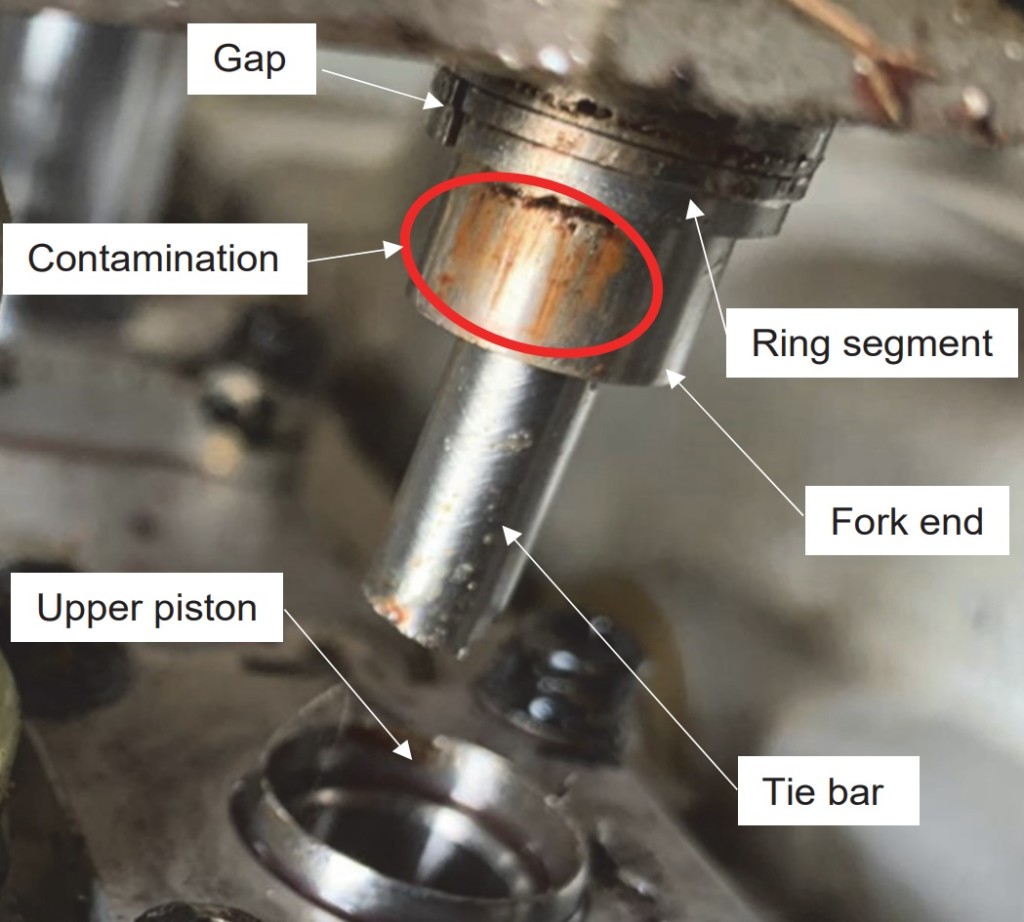 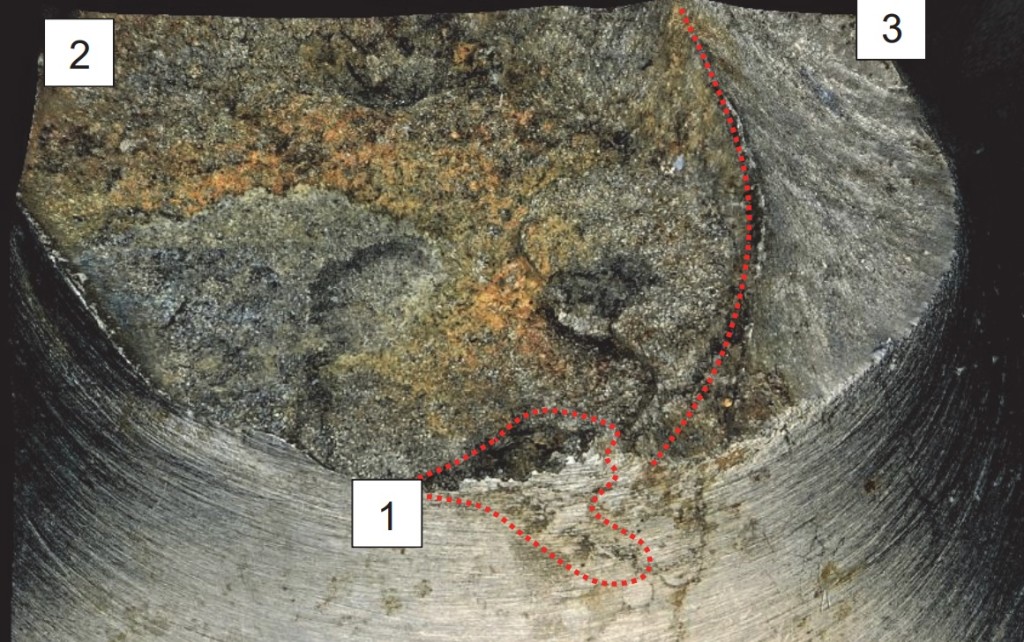 The tie bars from the lateral and collective axis actuators also showed evidence of surface pitting corrosion but to a lesser extent. Pitting corrosion was also identified on the internal bore of the upper piston coincident with the location of the failure in the tie bar.

The combination of the installation orientation of the main rotor actuator and an unsealed gap between the compression ring segments could lead to moisture penetrating into the upper piston.

This moisture would then collect by the first ‘O-ring’ seal at the end of the tie bar and, over time, cause the tie bar and piston to corrode. The helicopter’s normal operating environment over the Cayman Islands and its waters would expose it to high levels of salt. It is likely that this deposit caused the pitting corrosion found on the surface of the tie bar. The deposit would then cause further corrosion within the material along the intercrystalline boundaries. Normal operating loads on the tie bar would cause these small intercystalline corrosion cracks to coalesce, leading to a reduction in cross-sectional area. This would happen gradually over time, as evidenced from the light corrosion seen on the fracture face in VP-CPS. Finally, the remaining material would fail through overload.

[While] the H145 helicopter shares a similar MRA with the H135, in the H145 it is installed horizontally below an aerodynamic cover. Therefore the risk of moisture migrating into the upper piston and causing corrosion pitting is reduced.

Airbus issued an Emergency Alert Service Bulletins (EASBs) EC135-67A-039 and EASB EC135H-67A-011.  The EU Aviation Safety Agency (EASA) issued Emergency Airworthiness Directive (EAD) 2019-0087-E.   This required a one-time visual inspection a specific group of actuators.  The detailed inspection of the tie bar had be done in the workshop. If corrosion is detected or if the actuators have exceeded a defined period since their last overhaul they were required to be replaced. https://youtu.be/5y2NCPx4RN8