NTSB Comes Out For Gun Control

With Trump in the White House its major news when a Federal agency comes out for gun control…if only to avoid fouling flight controls rather than more innocent fatalities.

The pilot of Robinson R22 helicopter N843SH was taking a passenger up for the pilot’s third “hog hunt” flight in Wadsworth, TX on 13 February 2018.

As they reached a height of about 40 to 50 ft above ground “the passenger’s gun [butt] became lodged in the cyclic control”. According to an NTSB report, the pilot:

…instructed the passenger to move his gun multiple times, but the passenger “seized up and panicked.” The helicopter impacted the ground, and the fuselage and empennage sustained substantial [sic – see photo] damage.

The passenger received minor injuries and the pilot was unharmed. 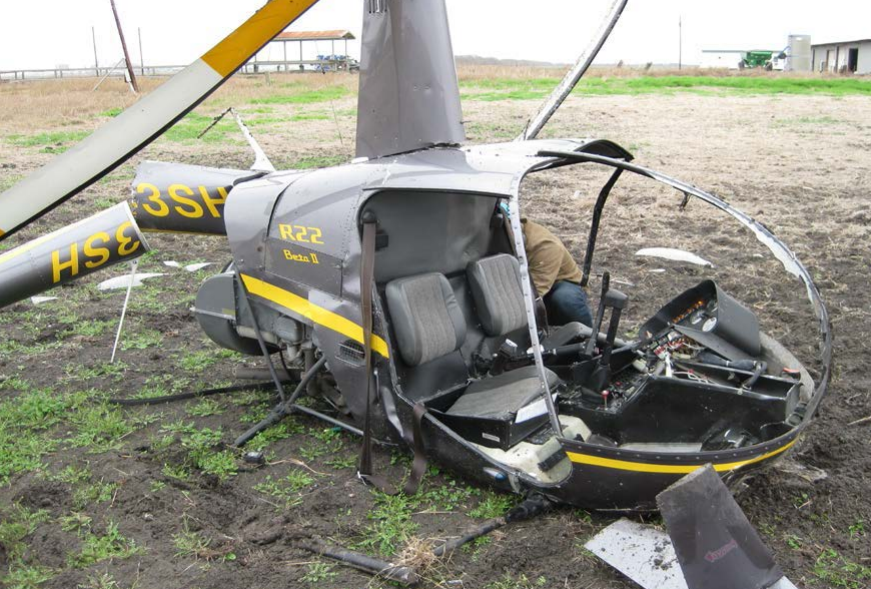 The pilot reported that it was the second hunt with the passenger and that he had provided a safety briefing before the accident flight. He added that, during the safety briefing, he discussed gun safety, when and where to shoot, and instructions on avoiding areas with the flight controls.

He added that, as a safety recommendation, he will conduct a more thorough safety briefing, including an on-ground, engine-off cockpit simulation and a lesson on firearm safety.

He [now also] allows each passenger to sit in the helicopter, prior to flight, to allow them to get a feel for the cockpit size and how to maneuver with their gun

The passenger’s gun becoming lodged in the flight controls during takeoff and his failure to remove it, which resulted in impact with terrain.

FOD in the cockpit can be deadly.

If you want to hunt hog, its more sporting and skilful to be on foot or, hey even, horseback…

At least that day it was Hogs 1 – Heli Hunters 0

Other Occasions When Flight Crew Briefs of Non-Aviators Proved Ineffective

* according to one source:

Of the estimated 4 to 5 million feral hogs in the United States, approximately 2 million call Texas home. Feral hogs can be found in approximately 230 of our 254 counties and cause an estimated $52 million of damage to Texas agricultural enterprises each year.

Hence hunting is authorised to control the population, even from hot air balloons…

If you think this agricultural helicopter use is extreme, well there is HeliTorch for controlled burn woodland management…

A nice reminder to military certification colleagues that civil helicopter usage is not always that sedate.  UK registered Super Pumas were once on call to ignite oil slicks in the Far East with HeliTorch.